Home » Cruise » Cruising with a Toddler

1 shares
We were invited to a family wedding in Tuscany last summer and we decided to do some cruise travel before the wedding. This was our first time taking our toddler to Europe so we really thought about where we’d like to go and how cumbersome it might be. The kicker is that the destination wedding was black-tie and involved several events where we’d need nice clean clothes, so we had to bring more than usual. Cruising with a toddler seemed like the easiest way to experience Europe with our luggage.
After much contemplation, we opted to do a Greek Isles cruise on Royal Caribbean. I had never been on a cruise before (I assumed they were just for old people) and I had always said that I’d rather spend more time at the destination rather than getting there. I was completely mistaken! 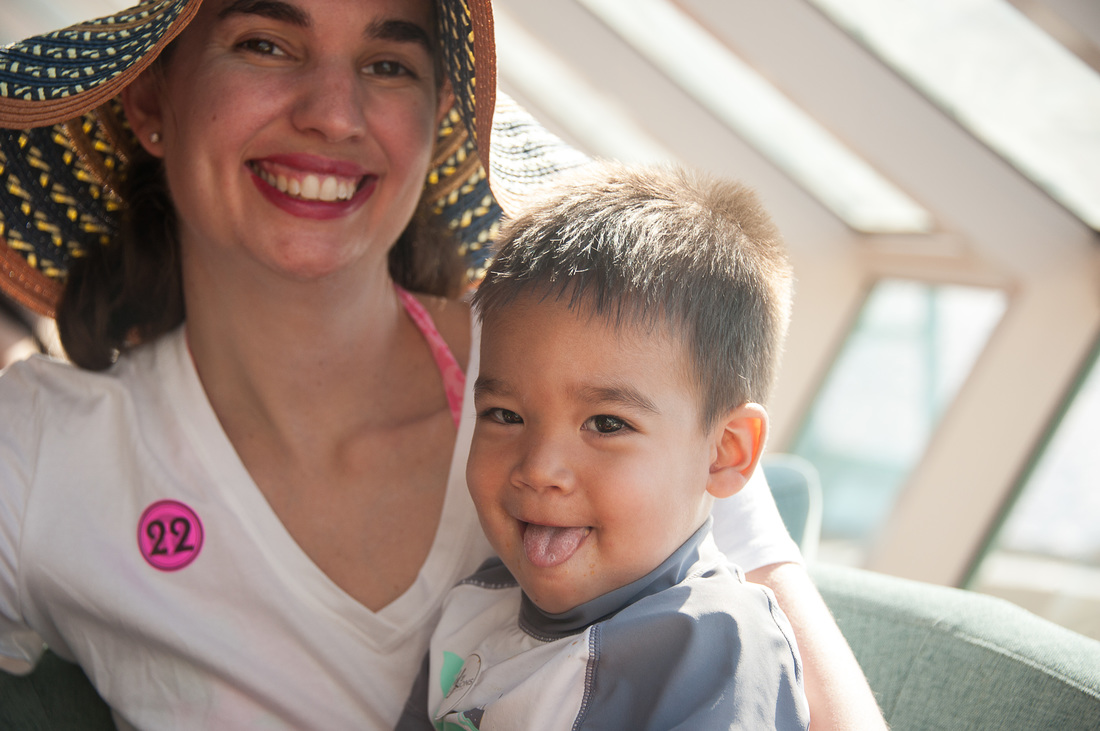 Our cruise was the perfect fit for our 20 month old! For one thing, the service on board was absolutely outstanding! Maybe it’s because our past experiences have made our standards so low that we feel like we have to apologize when we bring our son out and about, but I almost cried several times because we were treated so nicely! They actually begged us to bring our son to the dining room each night, where he had about 15 servers calling him nicknames and bringing him bread and special treats!
They also had a fantastic on-board babies and toddlers program. It was open in the mornings for parents to come play with their kids for free. They had movies running in the background and several large toys. This was nice to meet other parents of toddlers and to get Owen used to the space. In the afternoons, it became a drop-off zone for just $6/hour. In the evenings it was just $8/hour and they ordered Owen dinner. He loved it so much that he didn’t want to leave when we picked him up! They gave us a pager in case there were any problems. They also gave us a bag of toys that we were able to borrow for the duration of the cruise.

The excursions were also the right fit for our family. First of all, toddlers are free (but we could have left him in the kids club.) The buses were air conditioned, which was a nice contrast to the August heat in Greece. We brought a backpack with snacks, lots of water, extra clothes, sunscreen, teething medications, and a camera. We also brought sun hats for everyone and our Boba carrier. The one downside to the excursions (besides the cost) is that most came with a tour guide and you had to wear little ear pieces that are very tempting for toddlers to yank out of your ear over and over again. We found that was less stress to take off the ear piece and just walk around the sites and read about them in our guide books. This gave Owen more of an opportunity to walk around and explore. While we could have done the excursions for cheaper on our own, the ease of just showing up and not worrying about missing the boat (literally) was worth the extra cost with a toddler. Now that we have a family cruise under our belt, we might opt for just one or two excursions in the future and do something more laid back the rest of the days.

We chatted with other parents of small children on board and one of them mentioned that kids have to be at least 6 years old to be in one of those flip-down beds. The parents ended up having to book adjoining cabins so their toddlers could be in regular beds. That was really good to know! It was a tight squeeze with the crib in our cabin and it would be impossible to cram 2 in there. Another parent said her daughter preferred to play in the kids club rather than do excursions, so they put her in the kids club and they’d go off the boat to explore the port. We saw a lot of parents and toddlers doing laps on the deck. We also saw parents struggling with their strollers on the cobblestones at the ports. Having been to Europe before, we knew it would be tricky and chose not to bring our stroller. We don’t regret that decision. We brought a bunch of swim diapers with us only to find out that toddlers weren’t welcome in any of the pools on board.

All in all, Royal Caribbean was a fantastic choice for our family! When the cruise ended, we were really sad to say goodbye to everyone (and to say goodbye for really good service!) We will definitely be cruising as a family again!