Santorini was one of the stops on our Royal Caribbean Cruise around the Mediterranean. I’d wanted to see Santorini, Greece ever since I watched The Sisterhood of the Traveling Pants. It seemed like such an exotic island and the white houses and blue doors simply sold me!

Santorini was much drier than I anticipated. When we got to Oia, we had one hour to walk around town. Since it was such a short time, we just grabbed a few things from the backpack and hit the road. We first headed to a little spot to see the two blue domed churches that are featured in many postcards of Santorini. Then, we hiked to the ruins of a castle to get better photos of Oia. It was a 10 min walk and we were all fried by the time we got there!

Since we had such a short time in Oia, we just put Owen in the baby carrier and completely forgot about his sun hat. Poor guy was so hot that we had to take him out of the carrier so he could cool off a bit. We headed to one of the many souvenir shops that lined the streets hoping to soak up some air conditioning. Owen decided to pick up a shot glass that was on a shelf his height and he dropped it on the ground, where it shattered. He was very startled, but immediately grabbed another and threw it on the ground. We were mortified! He’d never done anything like that before. The shopkeeper came out and gently scolded him, while showing us that she wasn’t really upset but wanted to make sure he knew it wasn’t okay. Then she quickly ushered us inside because of the heat.  That’s when things got interesting.

She told us that they were in the midst of a heat wave and that people were dying. She literally ran to grab Owen wet paper towels to cool off his head and neck and gave him a straw hat. We were told how vital it was to keep his head covered and even though we explained his hat was just a few minutes away in the bus, she insisted that we take the straw hat to protect him on the walk. This is when we really felt like unprepared parents and that we had endangered our child. This is not a good feeling.

On the bus, our tour guide informed us that it was 40 degrees Celsius outside and was the hottest day of the year! The 30 minute bus ride back to Fira was nice so that we could all cool down in the air conditioned bus, drink some water and Owen could grab a snack.

By the time we got to Fira, we were ready to grab an early dinner. We brought out our Rick Steves book and he suggested a restaurant called Archipelegos. The view was amazing and the food was delicious! We ate the very best mussels we have ever had (butter, dill, lemon, Greek wine, garlic). We also tried the tomato fritters (something Santorini is known for) and they were so flavorful, with a crunchy exterior and a burst of tomato goodness in the middle with a thick tzakiki sauce to dip in, which Owen appreciated! Darren had the veal souvlaki that also packed quite a bit of flavor. The seafood risotto wasn’t nearly as tasty as the rest of the dishes, but was okay. We also got freshly squeezed orange juice and the Greek version of Fanta. Both were very refreshing on the hot day!

As we headed back to the boat, we got to see the parade of donkeys coming up the steep cliff. This was also a memorable scene from The Sisterhood of the Traveling Pants, so I was thrilled! But, when I turned to show Owen, I realized that he was passed out in the carrier. He stayed asleep the whole way down the cliff (inside a gondola) and all the way back to the ship. 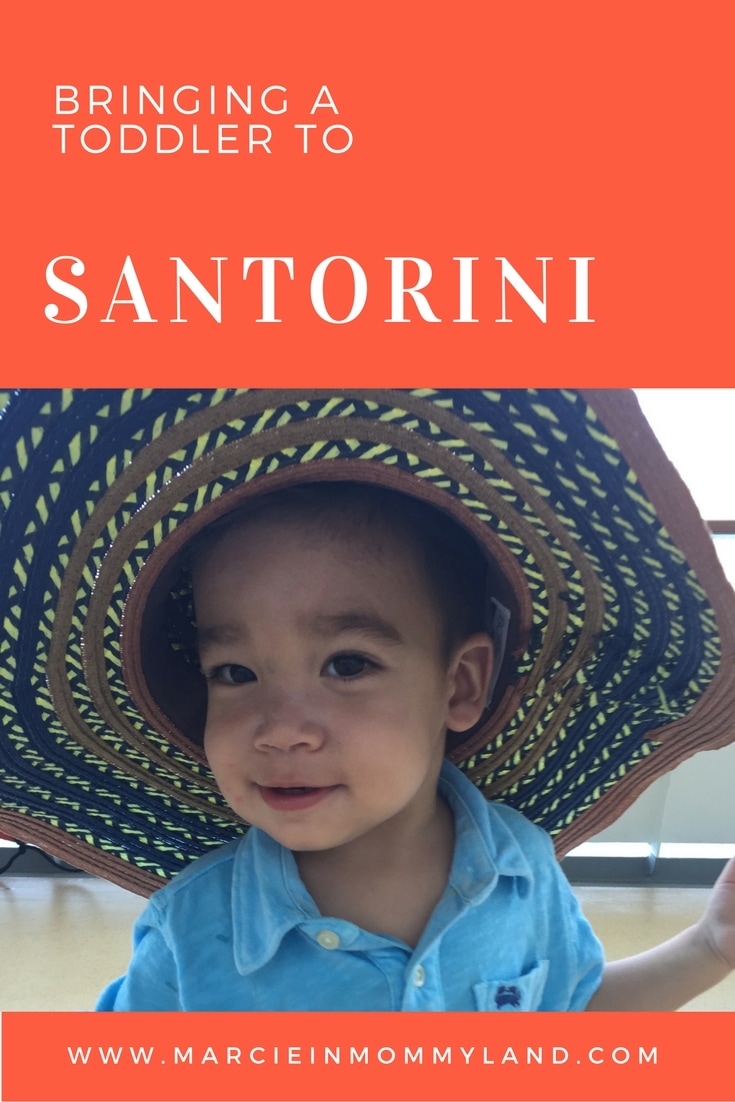 Your toddler is indeed a born traveler. He has seen more places than a grown up. Convey my best wishes to him. Love from all the world.

He's had some incredible opportunities!