Home » Europe » A Toddler in Athens

On our cruise around the Mediterranean last summer, on of our stops was Athens. We arrived in Athens on the same day that their Prime Minister stepped down and Athens was a true ghost town. It was a bit eerie as we drove through the city.

We boarded a bus and drove past many buildings and statues and had 10 minutes to look around the Panhellenic stadium, which was much larger than I expected. Then, we headed to the Acropolis, one of the most famous tourist attractions in Greece. It was at this point that were put on our headsets to listen to our guide lecture about the Acropolis. It was very hard to hear and my husband and I just looked at each other before taking them off and walking around on our own. For us, it’s better to experience in person and read about it later. Additionally, it was difficult to interact with Owen while we had on headsets (and he just wanted to take them off our ears.)

It was very hot (no surprise) and the marble underneath us was very slick. It would be very dangerous in the rain! We had Owen in the carrier for all the walking up and down the stairs. The Acropolis was very crowded. Once we got up near the Parthenon, we took Owen out of the carrier so he could walk around and cool off a bit. The ground was very uneven, so we really had to watch him extra closely. Plus, it was crowded and we didn’t want to lose him!

I thought we would be able to walk around the Parthenon, but it was under construction and everything was roped off with lots of security guards. It makes total sense. I just thought it would be more like the Colosseum, where you can walk around more. We completely lucked out that a photographer my husband met earlier in the trip offered to take our photo at the most perfect time!

Because I’m obsessed with dressing Owen in costumes, I had brought a toga that I had constructed from a pillow case. We quickly changed him into the toga and started taking photos when another tourist came up to us and said that her friend got kicked out of the Acropolis for wearing a toga. Since there were security guards everywhere, we got nervous and just took a few photos before quickly putting his regular clothes back on. Then, we grabbed our Seahawks 12th Man flag and took a few photos!

At the end of our tour, we were dropped off at the port terminal where we caught a cab to a gyro place at another port so my husband could finally have a really gyro in Greece! We were not disappointed! Plus they had fries with a delicious sauce that Owen couldn’t get enough of.

While Athens was very doable with a toddler (and would be with a baby, as well) I think we’ll hold off coming back until the kids are older and have learned a bit about Greek history and mythology. Having more background information (even if it’s just watching Percy Jackson movies) would make Athens fascinating for kids!

Where else to go in Greece: 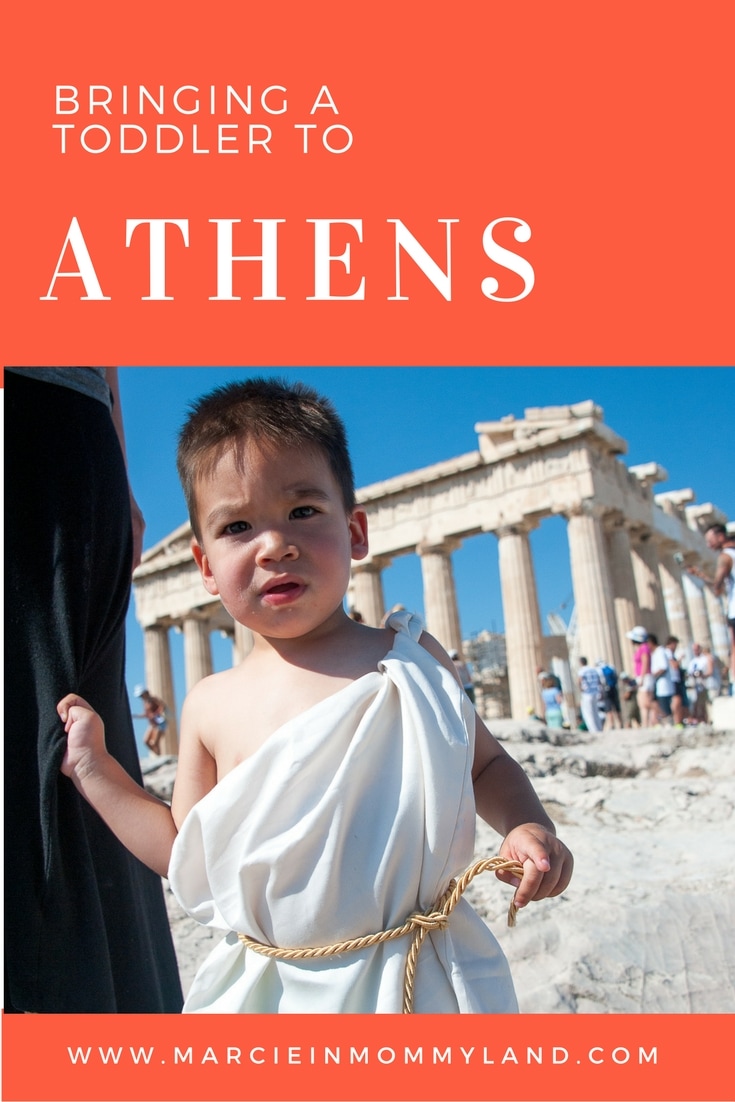