Seattle summers are hit and miss. When it’s sunny out, Seattle is stunning and everyone rushes to take advantage of outdoor activities. However, sometimes it’s a bit overcast and gloomy where you just want to curl up inside and drink soup. After a morning of rain and clouds, I decided that a little rain shouldn’t deter us from seizing our summer. My Mom was in Seattle visiting from Kauai and I wanted us to explore something. So, we loaded the car and headed to Remlinger Farms in Carnation, WA. We had been once before for their Fall Toddler Tuesdays, which offer a limited number of rides geared specifically to toddlers. My toddler Owen had a lot of fun then, so I was excited to see what it was like when the whole place was up and running. 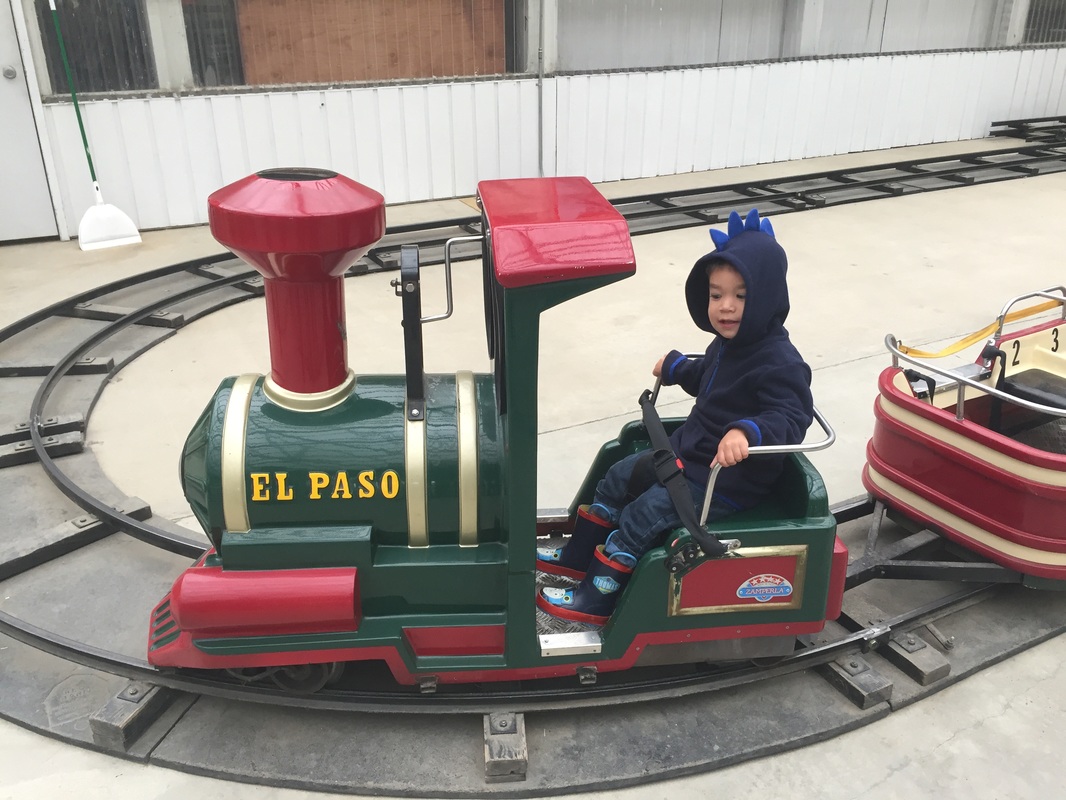 As soon as we arrived, there were some fun photo ops and Owen promptly headed over to a sign for a quick pic. We walked through the produce market and country store to get to the check in area. After we paid and got our wristbands, we were free to explore the park!

Our first stop was the little toddler train. This was Owen’s favorite ride last time we came and it was definitely one of his favorites this time. There were no other kids in line, so Owen got to sit up front and “drive” the train! It was hilarious because he had a very serious face the entire ride but then at the end he kept saying how fun it was and that he wanted to do it again and again!

We also checked out the flying corn ride right next to the train. Again, he was the only person and he was extremely serious. Halfway through the ride, he understood that he could move the corn up and down. That’s when I saw a glimmer of a smile! Again, at the end of the ride he went on and on about how fun it was. 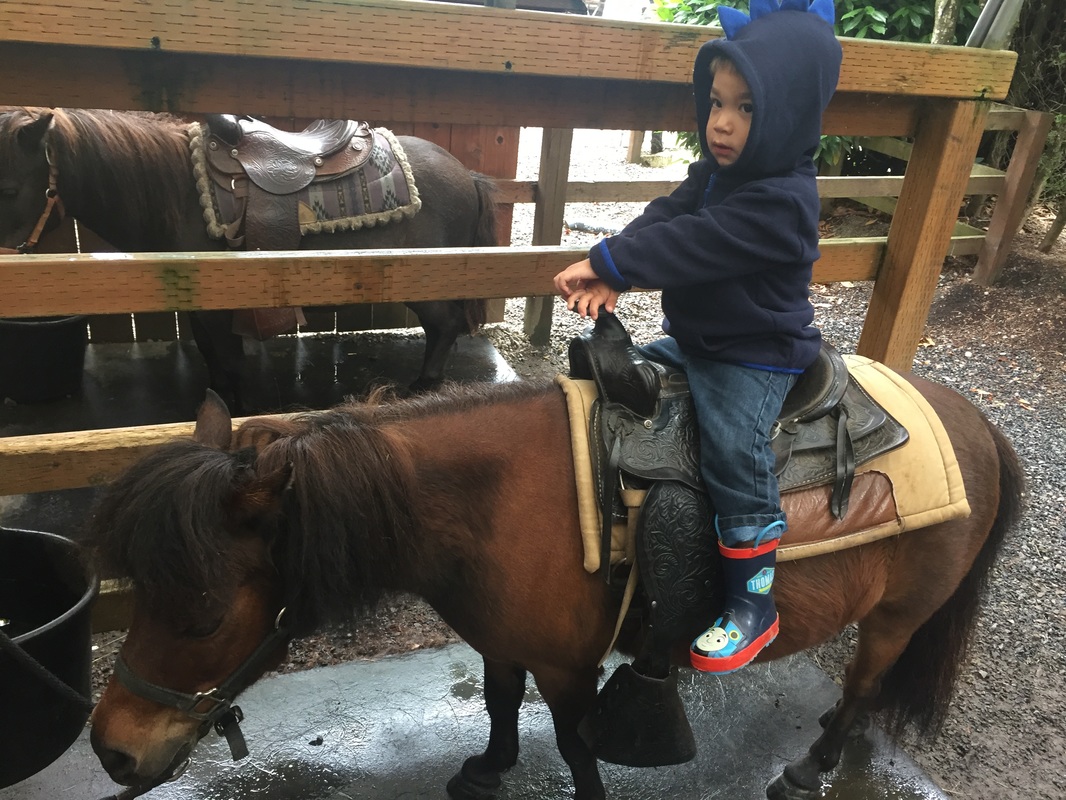 Owen on his little pony Bean before heading out on the train for his pony ride
On our way to finding the Steam Locomotive (whose whistle we could hear), I saw a sign for pony rides and Owen said he wanted to do that. We had tried to get Owen on a pony at an event last Fall and he was really wary. So, when he said he wanted to try it this time, we had to give it a shot. The staff there were so nice! They found him a tiny pony named Bean and she was the perfect size for a toddler! We patiently waited for the handler to come over and she put Owen on Bean and told him he needed to hold on with both hands. Since Owen is a toddler, I was asked to walk next to him on his left side and keep an eye on him the whole time (meaning no photos on my phone,) This was a really good rule because I was much more engaged in the whole experience and got to see flickers of a smile as Owen bravely balanced himself while meandering on the trail. At the end, we waved goodbye to Bean and sought out to find the elusive Steam Locomotive. 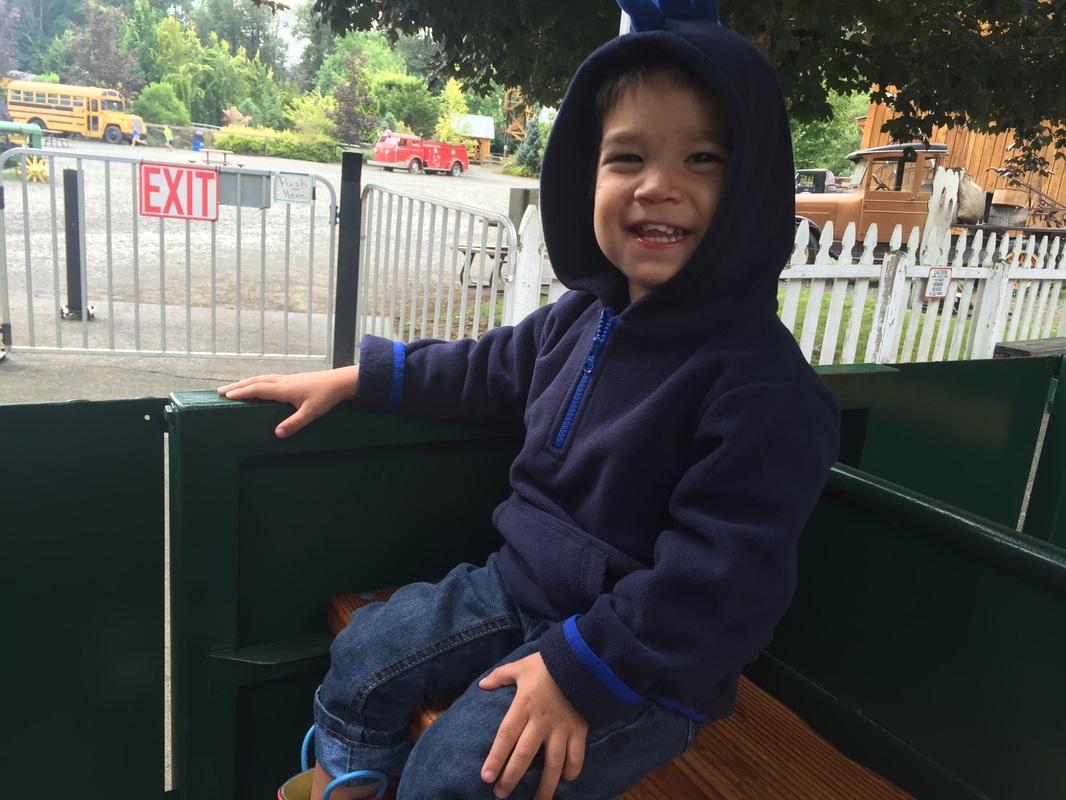 When we finally boarded the Steam Locomotive, Owen was all smiles!

When we found the train station, there was a sign saying the next train would leave in 20 minutes. So, we got Owen on a little canoe ride that he seemed to enjoy. We were able to walk next to him taking photos and chatting with the staff member, which was nice. Then, we started to explore the area outside of the train station that included a vintage firetruck, school bus, and several photo cutouts. Just as we were about to explore further, we saw the train pull into the station and then all bets were off. Owen insisted that we stand in line for the next 10 minutes and just watch the train conductor oil the Steam Locomotive and make sure everything was in working order.

When it was finally time to board the train, Owen was beyond excited! He quickly chose a train car and we hopped in and waited until it was time to go. After the train conductor bellowed “All Aboard!” we started on our journey around Remlinger Farms. We got to see goats, alpacas, deer, and geese in addition to the lovely scenery. At the end, we went through what looked like a mining tunnel before pulling into the station. This was definitely the highlight of the day for Owen! 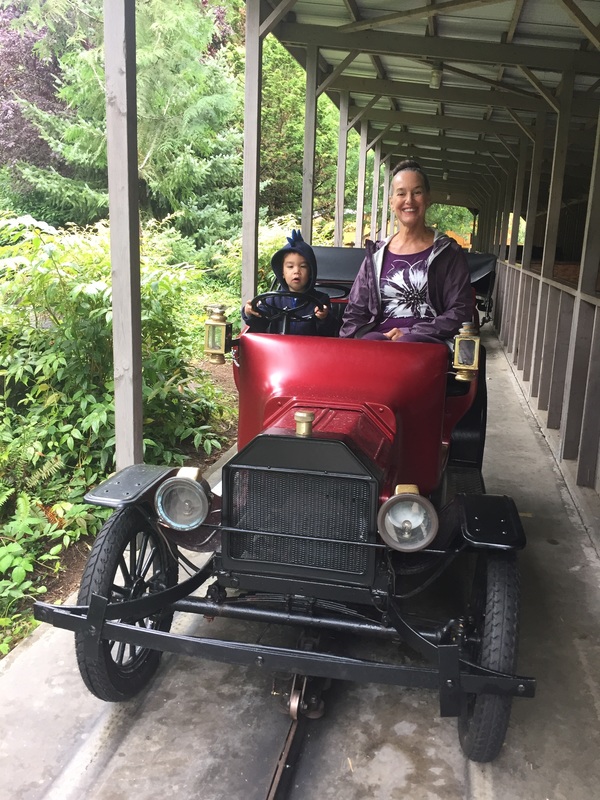 After the train ride, we went on a ride where Owen got to “drive” a vintage car while Grandma and I sat as his passengers. This was a lot of fun for all three of us! Owen kept giggling and saying “this is fun!” as he vigorously turned the steering wheel as we swayed back and forth on the guided track.

At this point, it was 1pm and we were all getting hungry. So, per Owen’s request, we did the little toddler train and flying corn rides one more time on our way to the cafe. At the cafe, they had lots of prepared options. My Mom and I grabbed some turkey sandwiches and soup and we got a boxed lunch for Owen that included sandwich, chips, cookie and juice. As soon as we sat down, Owen noticed a little train running on tracks near the ceiling. Then we realized there were two trains on two different tracks. This became our lunchtime entertainment as Owen waited to see if they would “bonk” into each other. Near the end of lunch, the trains stopped and we were all a bit confused. As we left the cafe, we saw a place to turn on the trains and Owen insisted that he press the button on our way out. It was a great way to end our fun day at Remlinger Farms! 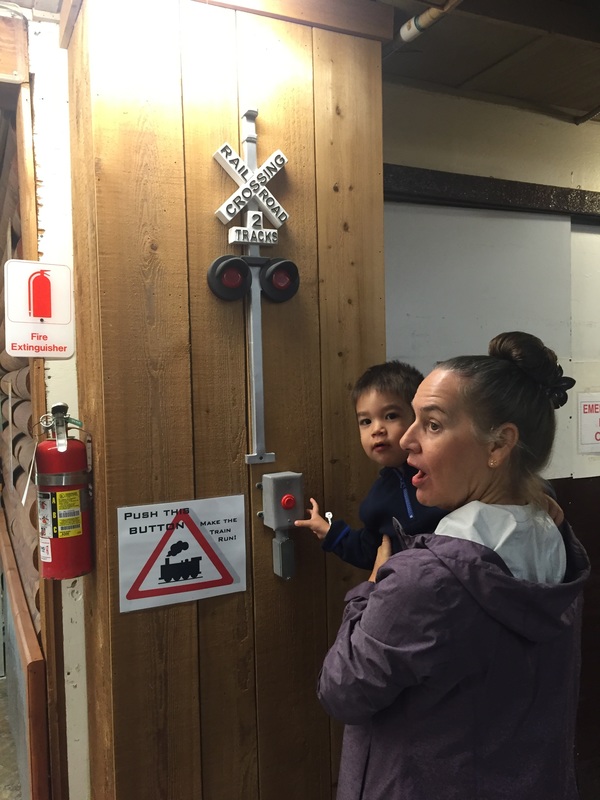 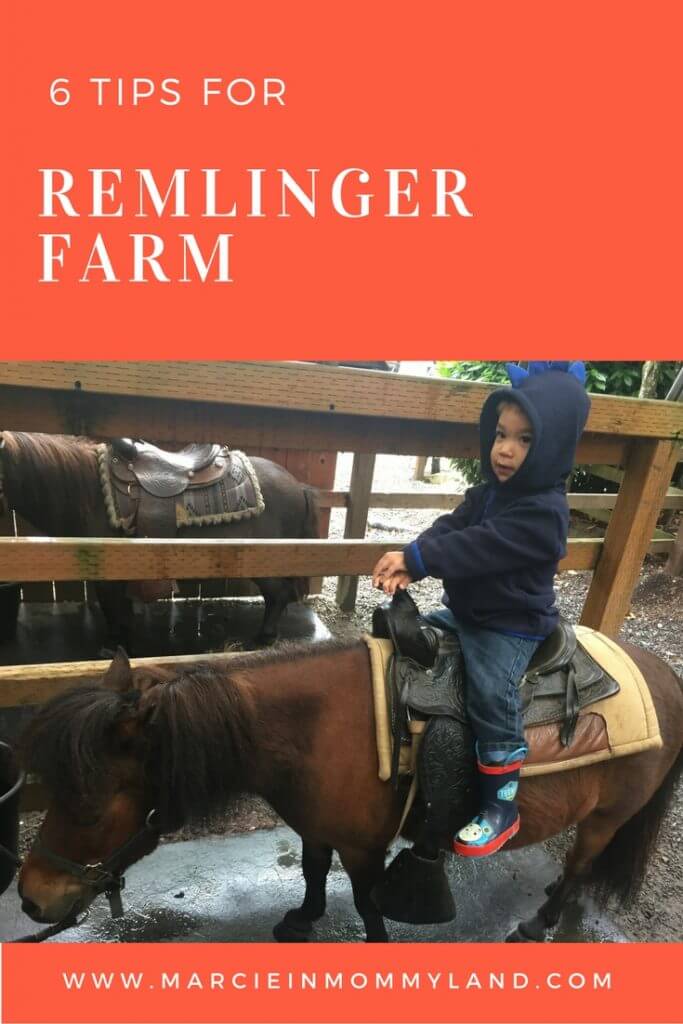