I’ve spent the past month hearing my toddler ask me, “Are we doing the Santa Train today?” It’s my fault, really, for telling him as soon as we purchased tickets. It also prompted questions about Santa. I told my son that Santa goes to everyone’s house on Christmas Eve and brings them presents. My son’s eyes widened as he inquired, “Santa is coming to OUR house and bringing US presents?” And when I told him we’d be leaving cookies out for Santa because he gets hungry visiting so many houses, he almost couldn’t handle it. Oh, and this was all before Halloween.

So, when it was finally the day of our Santa Train, the whole family was excited! We’d been on many trains, but never one to see Santa. My husband and I brought my Mom, toddler and infant on opening weekend.

I’m a pretty upbeat person who can always find the fun anywhere I go. I just couldn’t get over all the “bumps” of the event. My professional background is in non-profit event planning, so I was surprised how many things were poorly planned, especially for an event geared for families with small children. It was recommended to arrive 45 minutes prior to boarding time to get in line. That’s already a long time with toddlers in the rain and cold. At our boarding time of 11am, we were told that the train would be 30 minutes late. There was no explanation or apology. That’s when parents in line started grumbling and the kids started crying and melting down. It would have been nice if someone would have passed out hot cocoa and cookies to everyone in line as a kind gesture. My mom ended up taking our toddler for a walk and to run around a bit, which was very helpful.

When we finally were able to board, there were no assigned seats, so we ended up having 7 people crammed in a space meant for 4 people. We saw several couples taking up twice as much space but we felt uncomfortable approaching them to scoot over so our family could sit near each other. It would have been great if the train conductors could have helped facilitate seating. 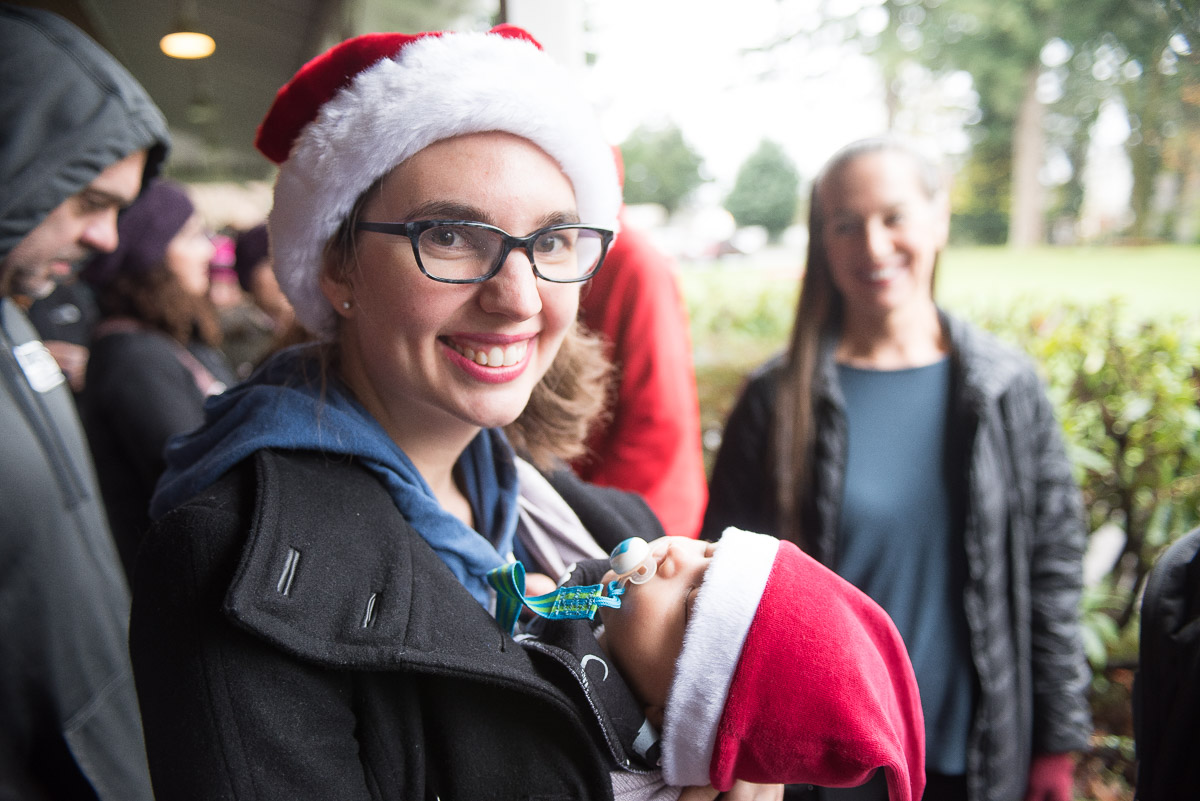 Keeping our spirits up with our Santa hats while waiting in line for the Santa Train in North Bend.

Upon arrival in Snoqualmie, we realized we’d be standing outside in yet another line in the cold and the rain to see Santa. Because my group had a few adults, we were able to switch off so one adult could get hot cocoa and cookies. Had I been by myself, I probably wouldn’t have been able to get refreshments until after we saw Santa in fear of losing my spot in line. They offered the refreshments in an old Red Cross train car, which was super cool! The cookie assortment consisted of chocolate chip, snickerdoodle and oatmeal raisin. My toddler had the snickerdoodle and enjoyed it. I got the chocolate chip and nearly chipped a tooth (it was like a hockey puck) and ended up throwing it away. I overheard some volunteers discussing how to get the right cookie dough consistency. Since we went opening weekend, I’m guessing they were still working out the kinks. 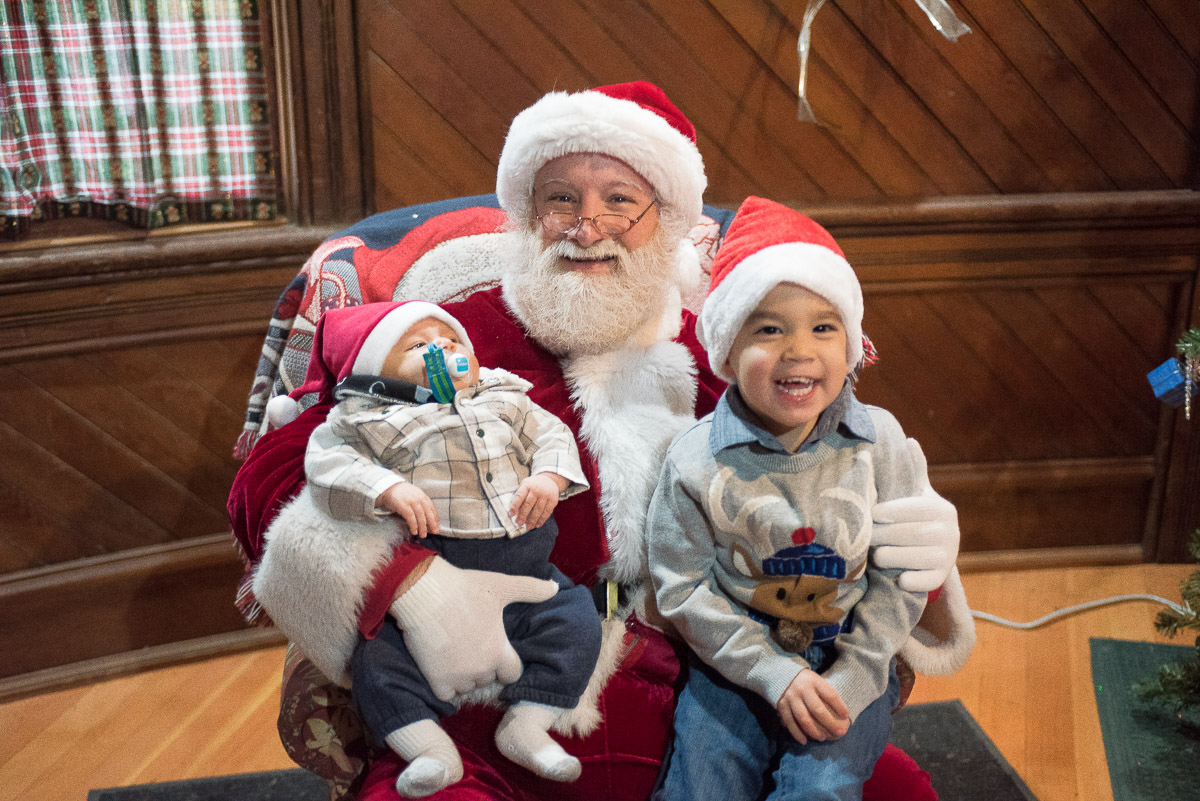 This Santa was absolutely fabulous and welcoming!

Our Santa experience was fabulous! They only had a couple of families in Santa’s house at a time, so it was fairly quiet and kids didn’t feel rushed. They had a table to set coats and bags, which was really helpful since we were all wet. The room was decorated beautifully and it was so fun to see the kids stand in awe in front of the Christmas tree. At the end, Mrs. Claus gave each kid a wooden top which was fabulously nostalgic!

As the train announcer reminded us that most people are volunteers, it sounded like he was trying to excuse the poor planning. The soundtrack of the ride back to North Bend was just kids crying because it was naptime. Had the train not been delayed 30 minutes, I think the timing would have worked better for most families. It also meant any families hoping to watch the Seahawks game missed the first quarter due to the delay.

I will say that my toddler had a blast and it lived up to all his expectations! He thoroughly enjoyed the train ride, walking around the stations and chatting with Santa. However, as much as I love holiday events, this will probably not be an annual tradition for us. 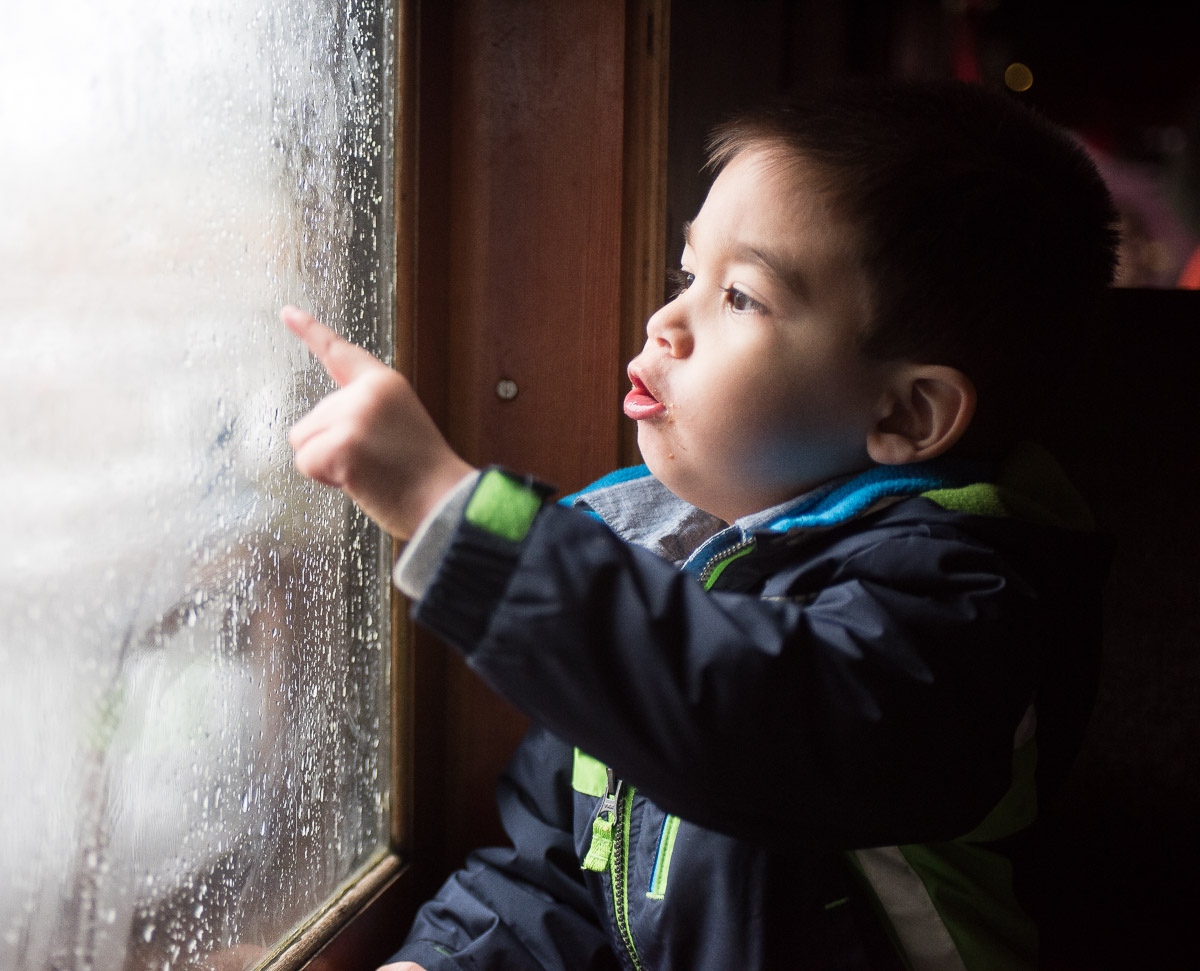 The Santa Train fogged up pretty quickly, which made for a fun toddler activity on the ride back to North Bend.

6 Tips for the Santa Train

Other Holiday Events in the Northwest

The Polar Express in Squamish, BC
Holiday Magic in Downtown Seattle
Holiday Festivities in Vancouver, BC

[…] You can read all about our experience on The Santa Train at the Northwest Railway Museum. […]