Home » BC » The Polar Express in Squamish, BC is Magical

My toddler has a deep appreciation for trains. We’ve been fortunate to be able to explore opportunities to go on train rides here in the Pacific Northwest. Not only have I learned more than I ever thought I’d know about trains, but it’s been a fun learning experience for the whole family. This past summer, we got to experience the West Coast Railway Heritage Park up in Squamish, BC (just North of Vancouver, BC.) This was the coolest train museum we’d ever been to! When I heard they had a Polar Express train event, I was instantly intrigued and determined to head back up for it. I’m so glad we did! 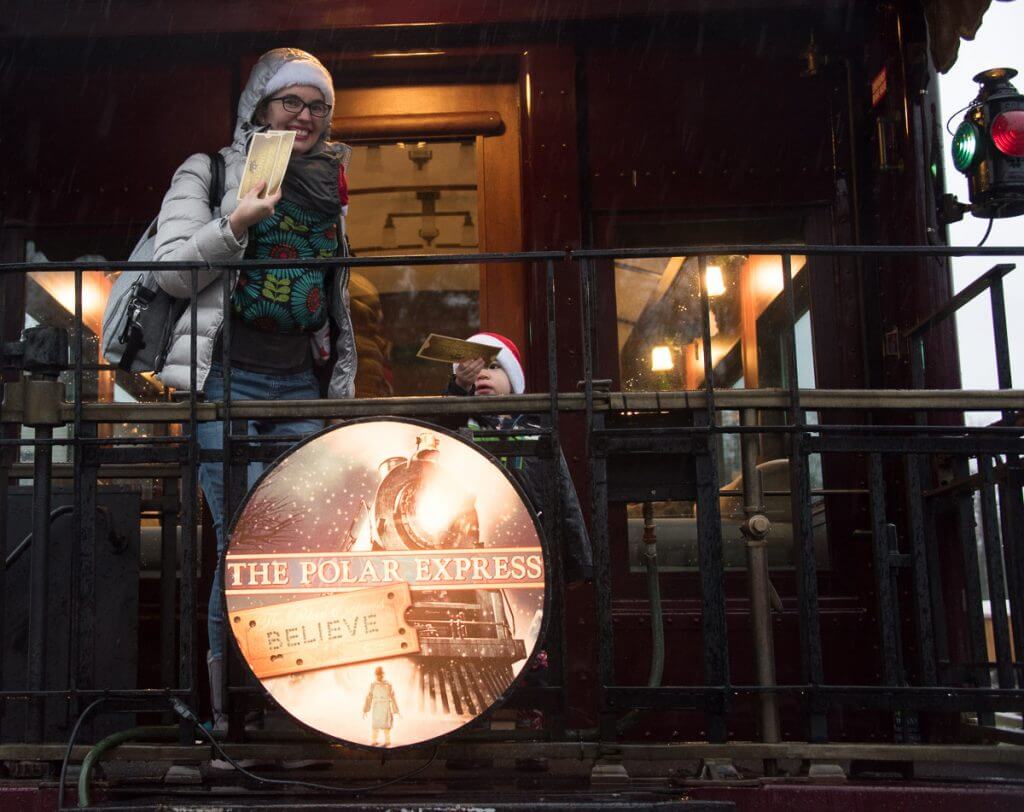 I do all photo ops, even in the biting, cold rain and wind!

One of the volunteers at the West Coast Railway Heritage Park suggested that we take the 4pm train because it would be light when we arrived and dark when we left. He also recommended that we wear our pajamas, just like in the book. I had high hopes of getting matching jammies for the whole family, but life got busy and I was just able to get fun ones for the kids. We arrived about an hour before our train ride so we’d have time to pick up our tickets from Will Call and head to the train station. They had lots of parking attendants assisting with parking across the street for $5. Since we had a 2-month-old with us, I took that opportunity to feed him before we ventured out.

It was very cold and rainy, so we hurried across the street and quickly picked up our Golden Tickets for the train ride. Then, we headed to the front of the train for a Polar Express photo op. There were only a few people ahead of us in line, so we were able to get some photos easily and then head to the train station. In the entry of the train station was a choir (all wearing pajamas and bathrobes) singing Christmas carols. They had two rooms indoors for guests to wait in (one for First Class and one for General.) We squeezed into the room for General admission and my husband took that opportunity to use the restroom before boarding the train.

We were big fans of the hot chocolate and the chocolate cookies the chefs passed out on the Polar Express.

A train conductor who was dressed the part asked a few kids near the door to help him announce “All Aboard!” and we all lined up to head to the train cars. It was so well-organized. We were greeted as we entered the train car and easily found seats. The conductors helped seat late arrivals so that families could sit together. The train conductor walked up and down the aisle chatting with families. We were impressed how well-kept up the train was from the seats to the windows. It was very comfortable.

There was a 10 minute delay (for which they apologized several times) and then we were off for our train ride. My toddler was so excited! As we started moving, the story of The Polar Express was read over the loud speaker. There were also elements of the movie (the Hobo, the little girl, the boy in the bathrobe, etc.) My toddler told me his favorite part was when the little girl asked him if she’d seen his ticket and to not tell the train conductor that she’d lost it or she’d be kicked off the train. He took her very seriously and we all shushed and said we wouldn’t tell him.

The chefs came around with the most delicious chocolate cookie. It was moist and tasted like a brownie. My toddler gobbled up his entire cookie and begged for mine. The train conductor walked around at this point and punched our Golden Tickets. He punched an O for my son on his ticket, which was fun! Then, the chefs came around with hot chocolate, which again was pretty tasty. My toddler did end up spilling some on me and my diaper bag, but thankfully we had napkins to quickly clean it up.

Then, they passed out song books with 15 Christmas carols in them. My husband and I looked at each other hoping we wouldn’t be singing ALL of them and thankfully the train passengers decided to just sing Frosty the Snowman. It was a fun way to end our train ride! The collected the song books and the announcer mentioned that this event was run mostly by volunteers and that this was their biggest fundraiser of the year. It was perfect timing, as our next stop was the North Pole which had some opportunities to donate more money. 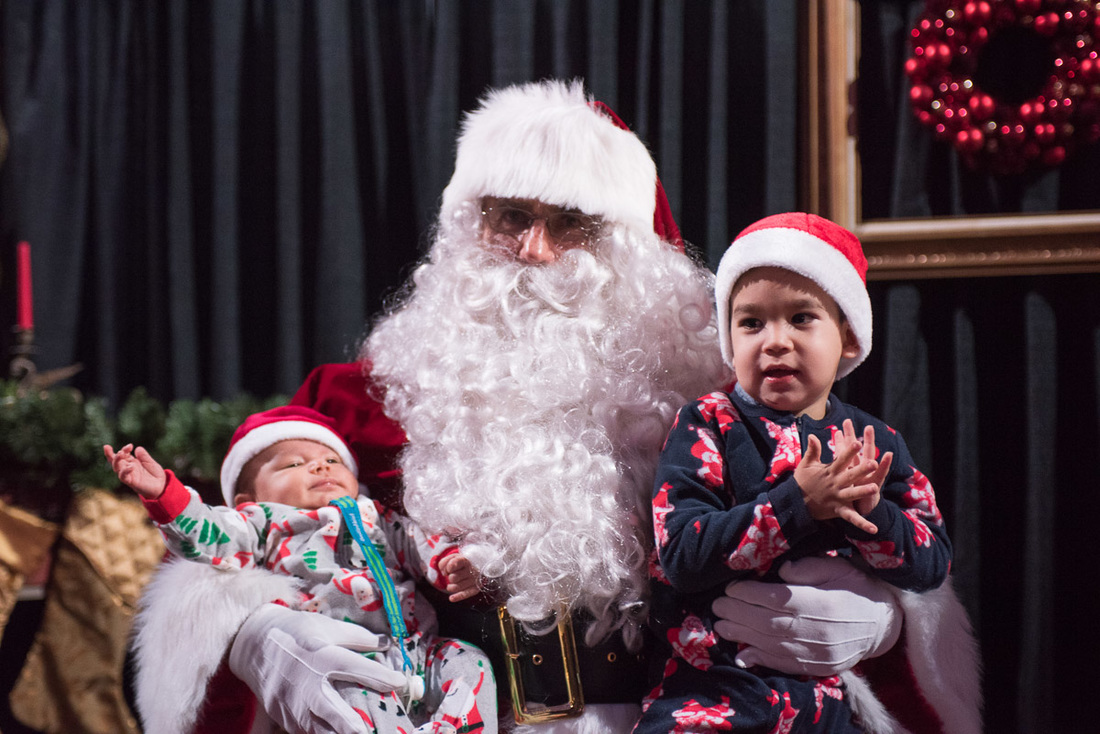 It was really sweet to get a photo of the kids in their Christmas jammies with Santa!

The North Pole was inside the Roundhouse at the West Coast Railway Heritage Park and was filled with fun activities for the whole family! The mini train that we rode around the park in the summer was now inside and ran around Santa and Mrs. Claus. That was the first line we got into because it moved quickly and our toddler was just too excited. The mini train was decorated and did two laps around lots of holiday train decorations.

After our train ride, we headed to the Ice Cave, which was new this year. Inside, they had a bouncy house, a climbable train that is usually outside, mini golf and a train where kids could pull the whistle. Our son just wanted to do the whistle a few times and then head back in for another mini train ride.

We got in line to see Santa after the line had quieted down. It was a slow line, so my husband stayed in line while I took my toddler on the mini train one last time. My husband was able to wave at us as we passed him on the train. We spent the next few minutes chatting with other people in line and then it was our turn. It was cool because we had to cross the train tracks to get to Santa and wait at the Train Crossing sign (which is amazing if you are a 3-year-old who loves trains,)

Santa was at the end of his shift, but didn’t make us feel rushed. We were able to get both boys on Santa’s lap and then just our toddler on Mrs. Claus’ lap. They didn’t have a photographer, but they did have an elf who would take photos with our camera. We opted to just have the boys since they were in their Christmas jammies. Mrs. Claus gave both boys a silver bell (like the one from The Polar Express) and we were on our way.

At this point, everyone was cleaning up. We had been at the event for 2.5 hours and didn’t even do all the activities. They had an area to write letters to Santa (and he will reply back), cookie decorating, wooden train building (for $10 donation) a curtained-off area to watch the movie The Polar Express and a whole area upstairs we didn’t even see. Now we’ll have more things to do next year.

The walk back to our car was tricky. It was really dark and the parking attendants were gone, so we had a hard time figuring out how to get to the parking lot without falling in puddles or slipping on the mud. Thankfully we had flashlights on our phones.

The drive back to Vancouver was a bit nerve-wracking. The Sea to Sky Highway is gorgeous during the day, but can be scary in the wind, rain and dark. It winds a lot. Let’s just say the Road to Hana was much less stressful. 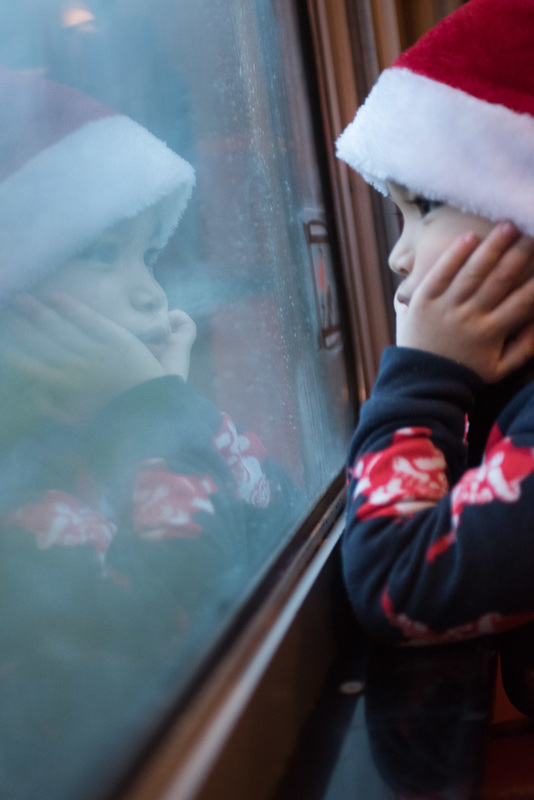 The Polar Express train ride was filled with sweet moments of wonder, like this one.

My husband and I were truly impressed how friendly the staff and volunteers were and we felt very taken care of throughout the entire event. It was organized beautifully! Not only do we plan on coming back for The Polar Express next year, but we are also curious how their Day Out With Thomas differs from the one in Snoqualmie, WA. 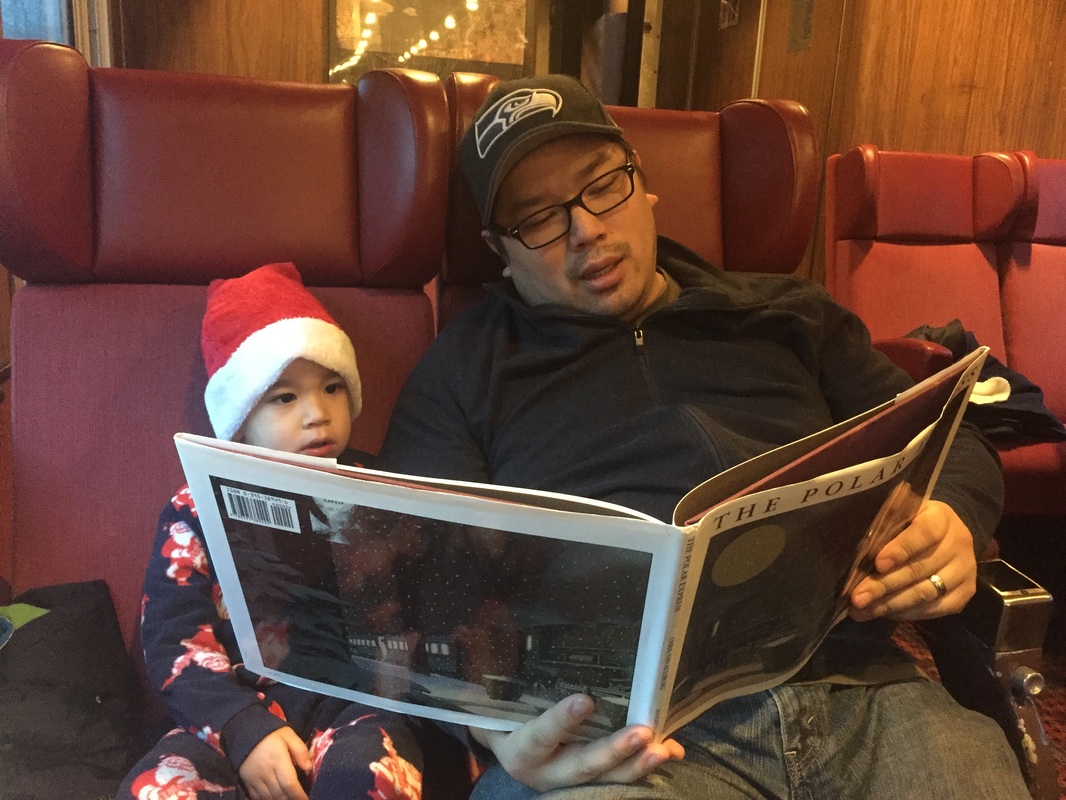 My husband read The Polar Express to our toddler while we were waiting for everyone to board the train.

7 Tips for The Polar Express

If you’re planning to visit the West Coast Railway Heritage Park outside of The Polar Express, read my tips here. 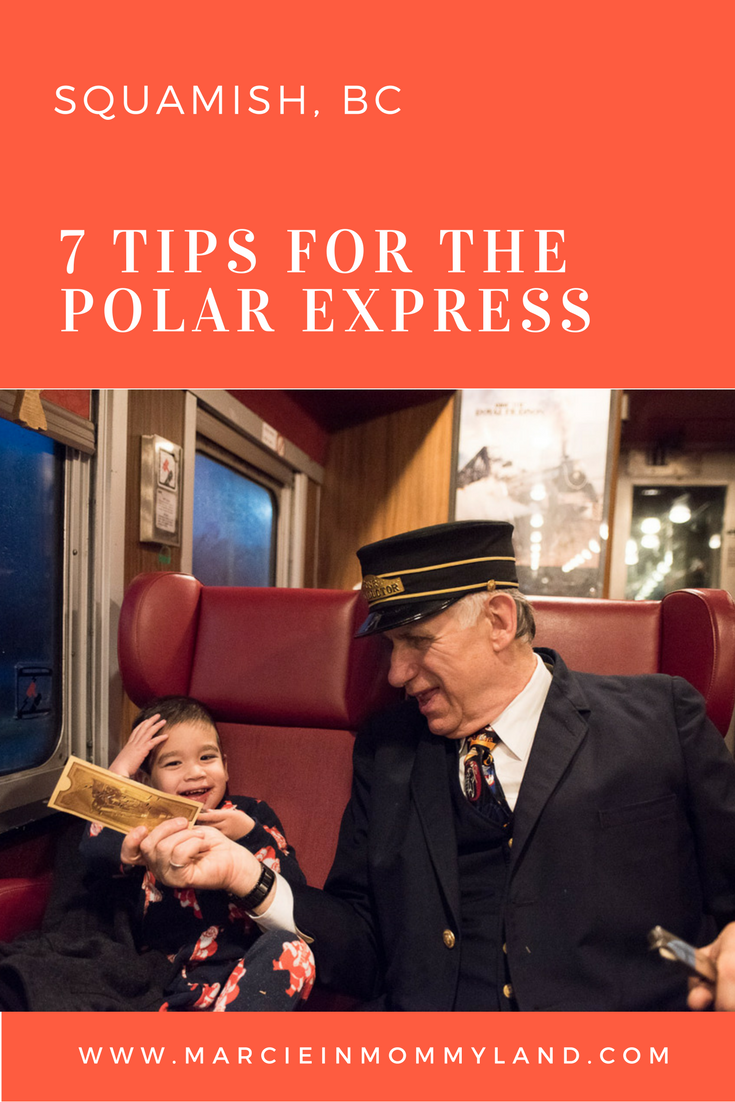