My family loves to go up to Vancouver, BC. It’s just a 3-hour drive from Seattle and there are fun things to do and super friendly people up there. So, when I saw a deal from Travelzoo for the Executive Hotel Vintage Park, I was happy to have an excuse for our next trip.

We usually stay near Robson Street in Downtown Vancouver, so I was intrigued to stay a bit South of that area. There was a traffic accident so we ended up arriving about 2 hours later than we had planned, meaning it was past our kids’ bedtime and we hadn’t had dinner yet. My husband was able to run into the lobby and check us in before we parked in the hotel garage and unloaded our car.

Once we got to the lobby, we asked an employee how to get to the condo side, since our elevator didn’t go up that high. He told us to go down some stairs to another elevator. As we had 2 rolling suitcases, a double stroller and a toddler with us, we know that wasn’t a viable option. So we hunted around for another employee who told us we’d need to go to the 9th floor and then walk a bit to another set of elevators to get to our room. We passed the elevators the first time because there was no button on the outside, just a slot to put a hotel key so we assumed it was for staff-only. After walking a bit more, we figured that must be the correct elevator. It was. 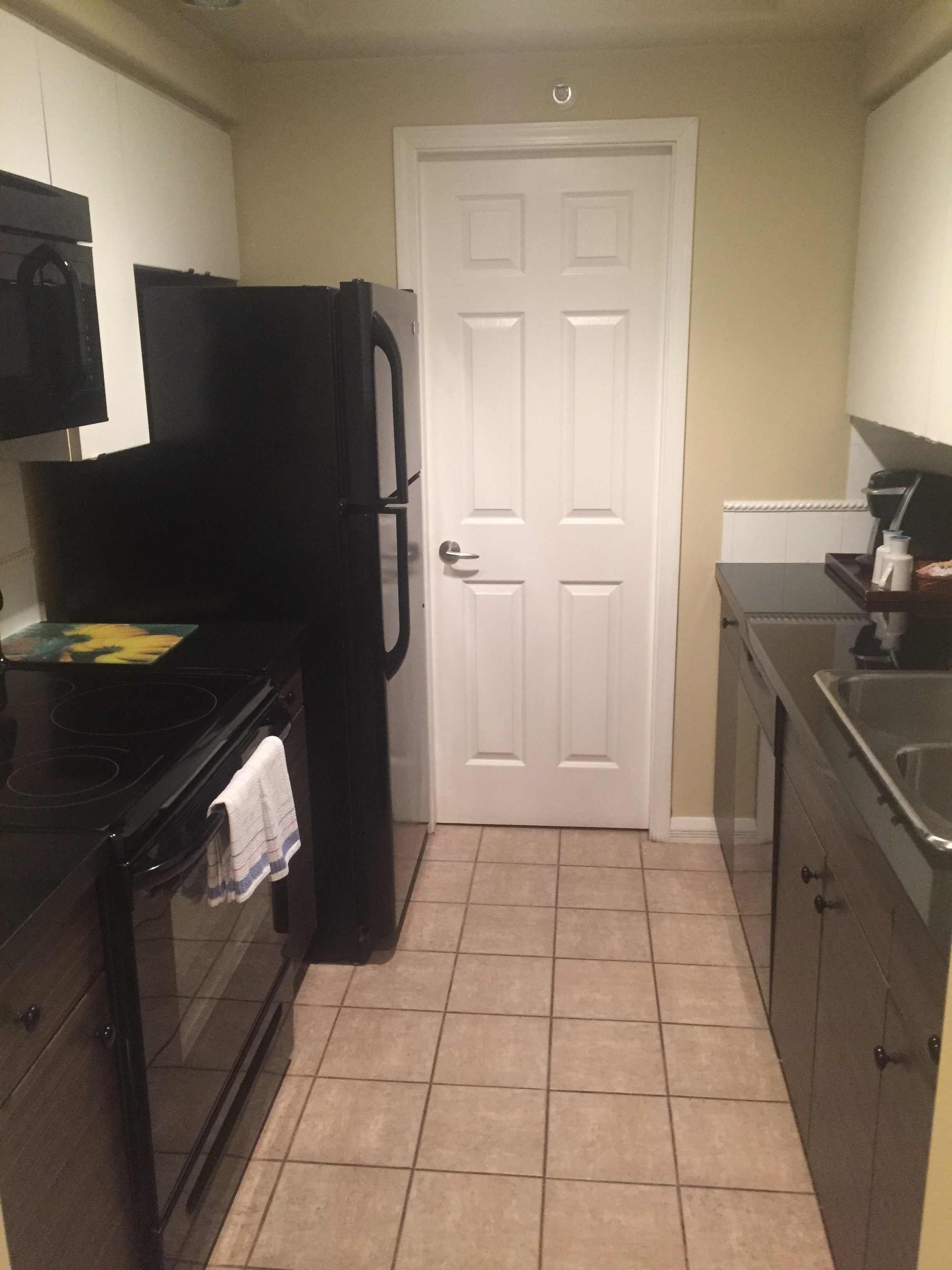 The kitchen was great for our family and had enough plates, cups and utensils plus a large refrigerator.

The first thing I noticed about the room was how cold it was. We cranked up the heat and when that didn’t seem to help, we found some open windows (they were hidden behind the shade.) Then we looked through the hotel guide to figure out how to order room service so we could get our toddler fed and to bed. We saw that they had a restaurant and it said there was a room service menu in our room. We looked around and didn’t find one so we called the front desk. They told us the restaurant didn’t do room service, so we decided to just eat at the restaurant and we loaded up the kids and headed down. When we arrived, we were told it was a pop-up restaurant and they were unable to accommodate us and had no knowledge of the hotel restaurant or where we could get food. So, we had to go on a different elevator and headed to the lobby to ask the front desk. They pointed us to another desk that had delivery menus on it. We perused them and ordered Chinese take-out. Forty-five minutes later, we were finally eating dinner.

The next morning, we were able to enjoy the room before heading down to breakfast. My favorite part of the room was the large shower! It was great to not rub up against a curtain or wall. It was also nice to be able to see the street from our bed. My toddler had lots of room to play with his trains and walk around. 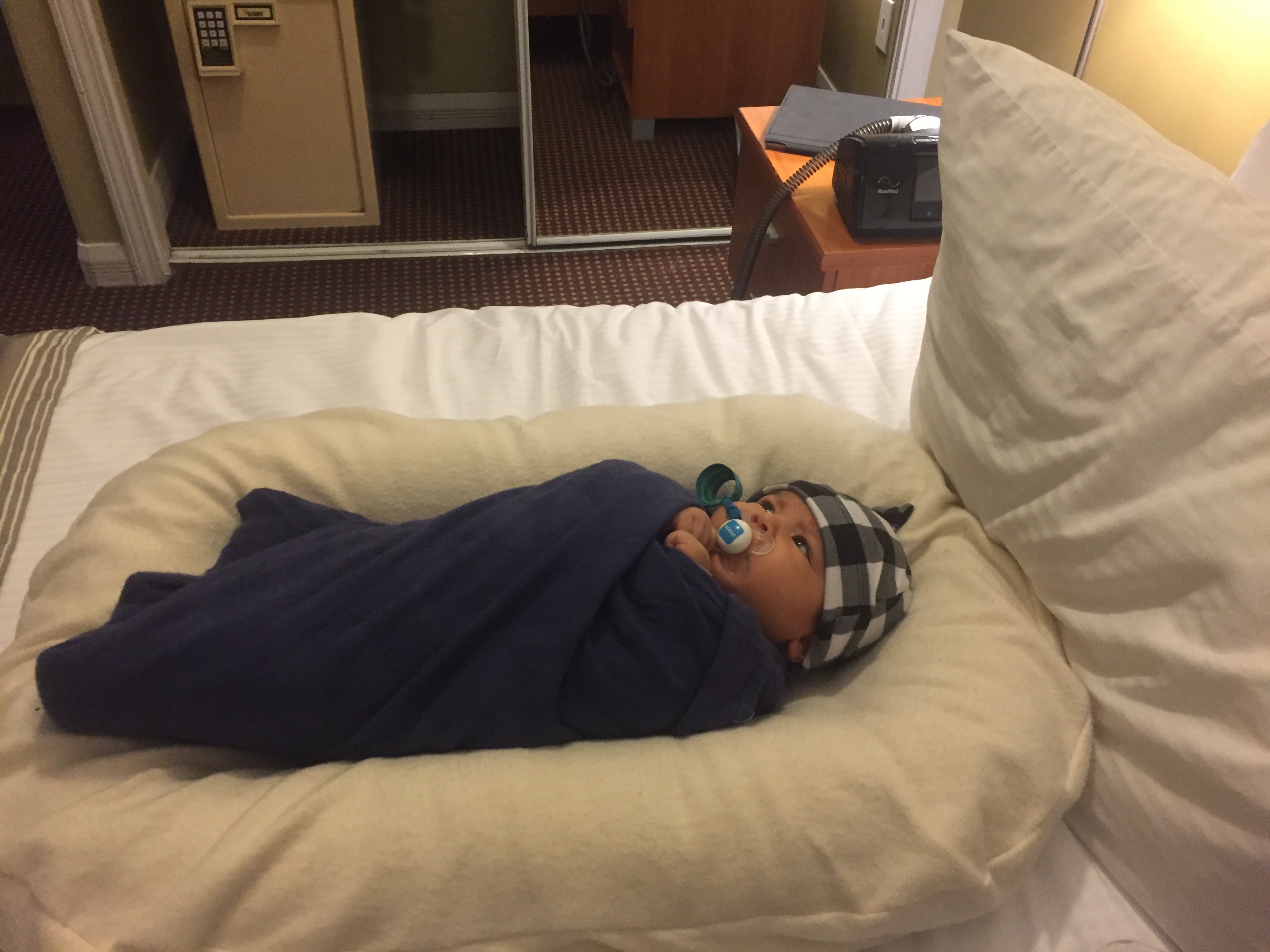 There was plenty of room for my baby and his SnuggleMe in our queen sized bed.

Breakfast at the restaurant was very nice. The dining room is divided into two parts, so we were able to head to the less-crowded part. There was a large assortment of breakfast items and we were able to find items for everyone to eat. The staff was the best part of breakfast. They were so friendly and accommodating!

We spent the rest of the day out exploring holiday festivities (Stanley Park Miniature Railway, Vancouver’s Christmas Market and the Polar Express Train up in Squamish.) When we returned, the parking garage was full and we had to park on the street in the rain. It was a long day and we arrived back at the hotel in time to give our toddler leftover Chinese food (yay for the fridge) and my husband walked to Il Giardino to get us take out Italian food. It was quite nice to sit in the dining room and have a sort-of date night while the boys slept.

When we woke up the next morning, we discovered two more open windows in different areas (again hidden by shades.) They must have been opened when the room was cleaned. We closed them to keep the heat in and headed to breakfast. The staff again was so friendly and they remembered us!

We packed up all our stuff and headed down to the lobby to check out. Again, it took 2 elevators and some fanagling to get us all down there. My husband left us in the lobby while he got our car from the street and we loaded up. There were 4 other cars doing the same thing and the driveway was pretty crammed. Another guest complained to us about the parking lot situation as were were all freezing trying to load up our cars. 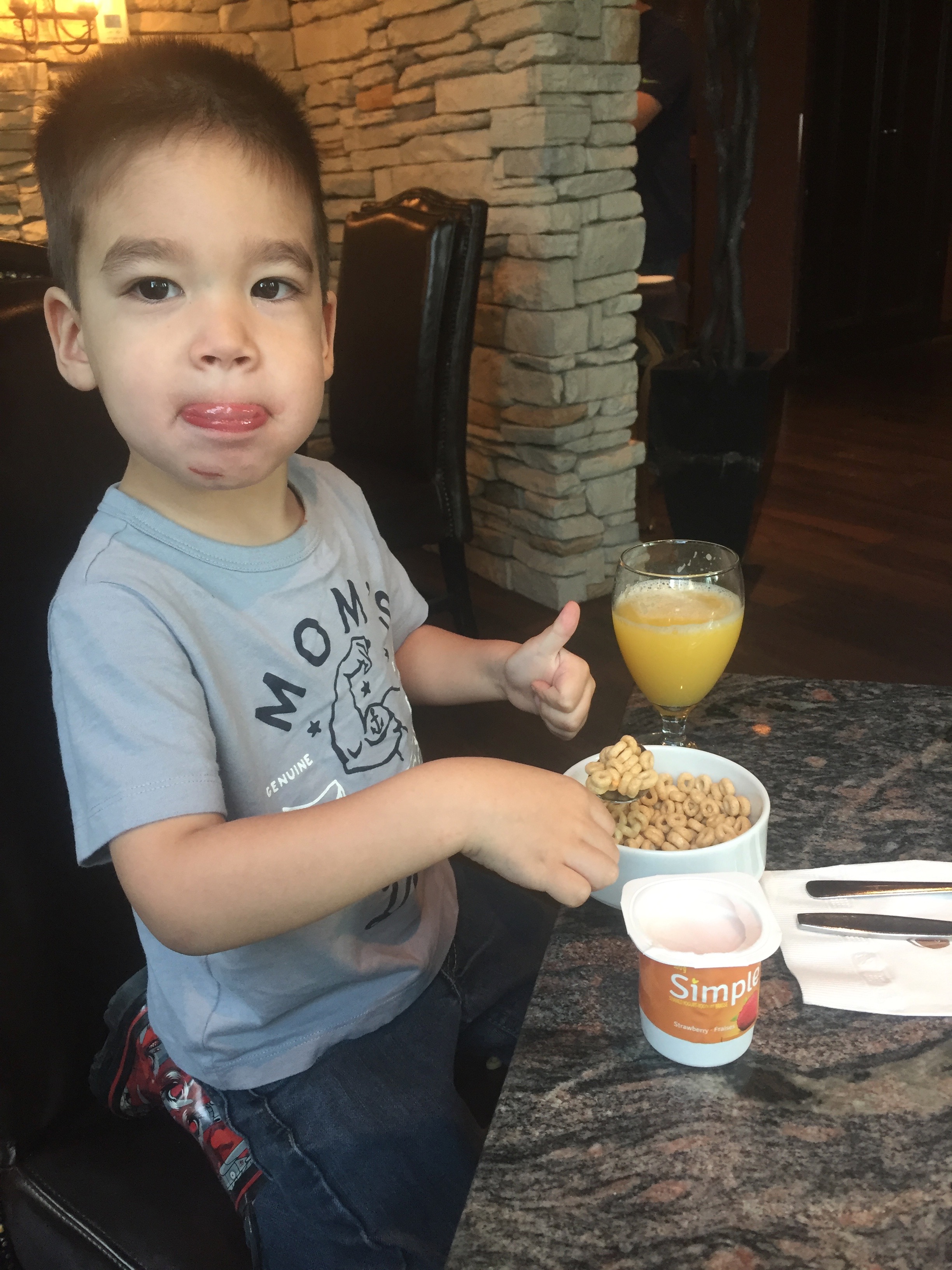 Breakfast at the Executive Hotel Vintage Park in Vancouver, BC

What I Liked about the Executive  Hotel Vintage Park 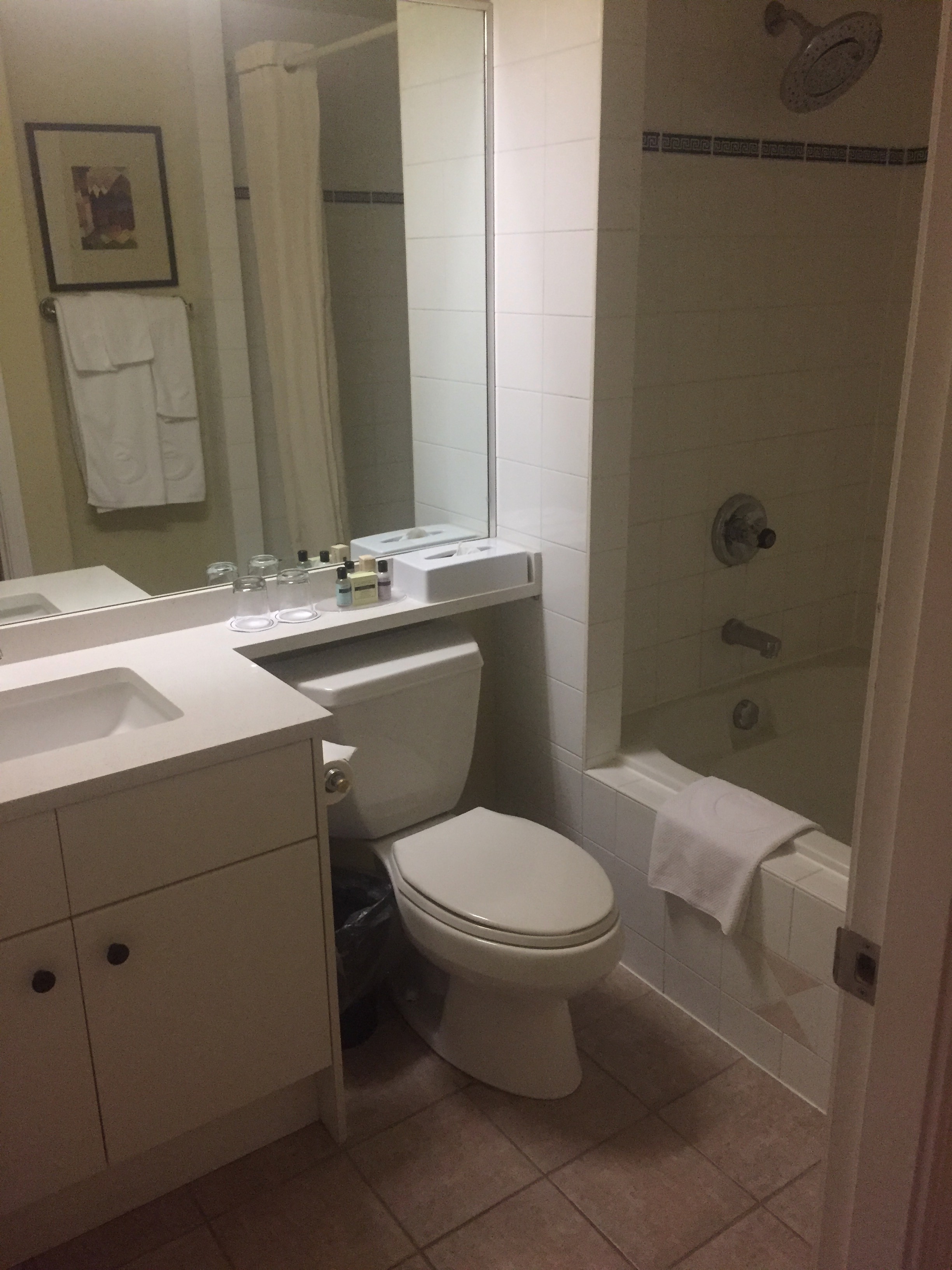 The master bathroom was pretty standard, except for the large shower.

What I Didn’t Like about the Executive Hotel Vintage Park

While I appreciated the larger suite, the hotel definitely was lacking a lot of amenities and accessibility for families with young children. I’d probably take a smaller room at a hotel that had an onsite restaurant that offered lunch/dinner and was a bit more user-friendly.
Let’s keep in touch: Facebook, Twitter, Instagram, Pinterest 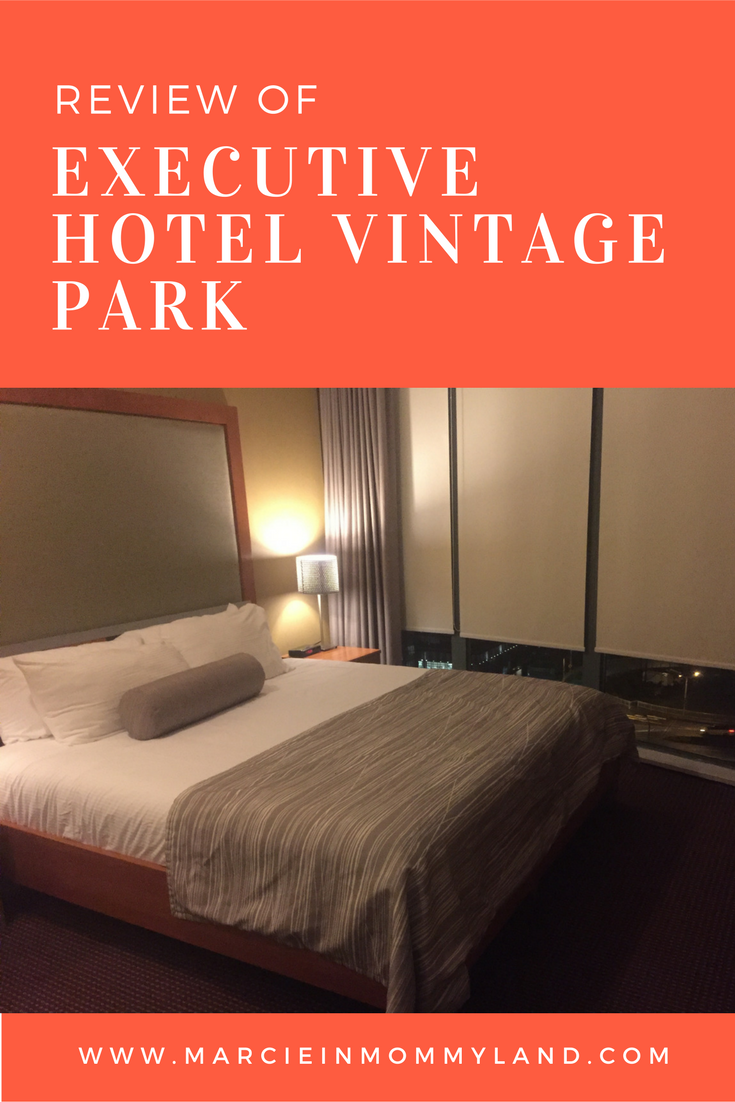