20 shares
Science World is a “must-do” if you are visiting Vancouver, BC with a toddler. It’s such a well-thought out museum with tons of things for children and adults. Even if you aren’t a fan of science museums, it’s a fun place to play with your kids. We checked it out last year when our toddler was 2 years old and we returned this year when he was almost 3 years old along with our 2-month-old baby.

We arrived right when they opened at 10am on a Sunday for a fun activity to do before we drove back home to Seattle. We easily found parking in their paid lot and loaded up our stroller. If we had gone in the summer, we would have skipped the stroller, but we wanted a place to stash our heavy coats and the diaper bag and the camera bag. Since we are members at the Museum of Flight in Seattle (a partner museum), we just showed our membership cards and we were able to enter for free.

Since we had been before, we headed straight to the Kidspace exhibit area on the 2nd floor. It’s a room geared for kids ages 6 and under and is filled with hands-on activities including climbing structures, building blocks, science experiments and more. My toddler spent almost an hour playing with a red boat in the water table. They have smocks in all different sizes and styles so kids can protect their clothing from getting too wet. They also have lots of small step stools. Inside the water table, they have small pieces of plastic where kids can create water streams to put their boats on and race down to the end.

Once he had thoroughly enjoyed the water table, he decided he wanted to do the face-painting. I liked that the face painters asked if he’d like it on his hand or face. My son prefers getting it on his hand so he can look at it throughout the day. He opted for Santa Claus and we were impressed how well it came out. 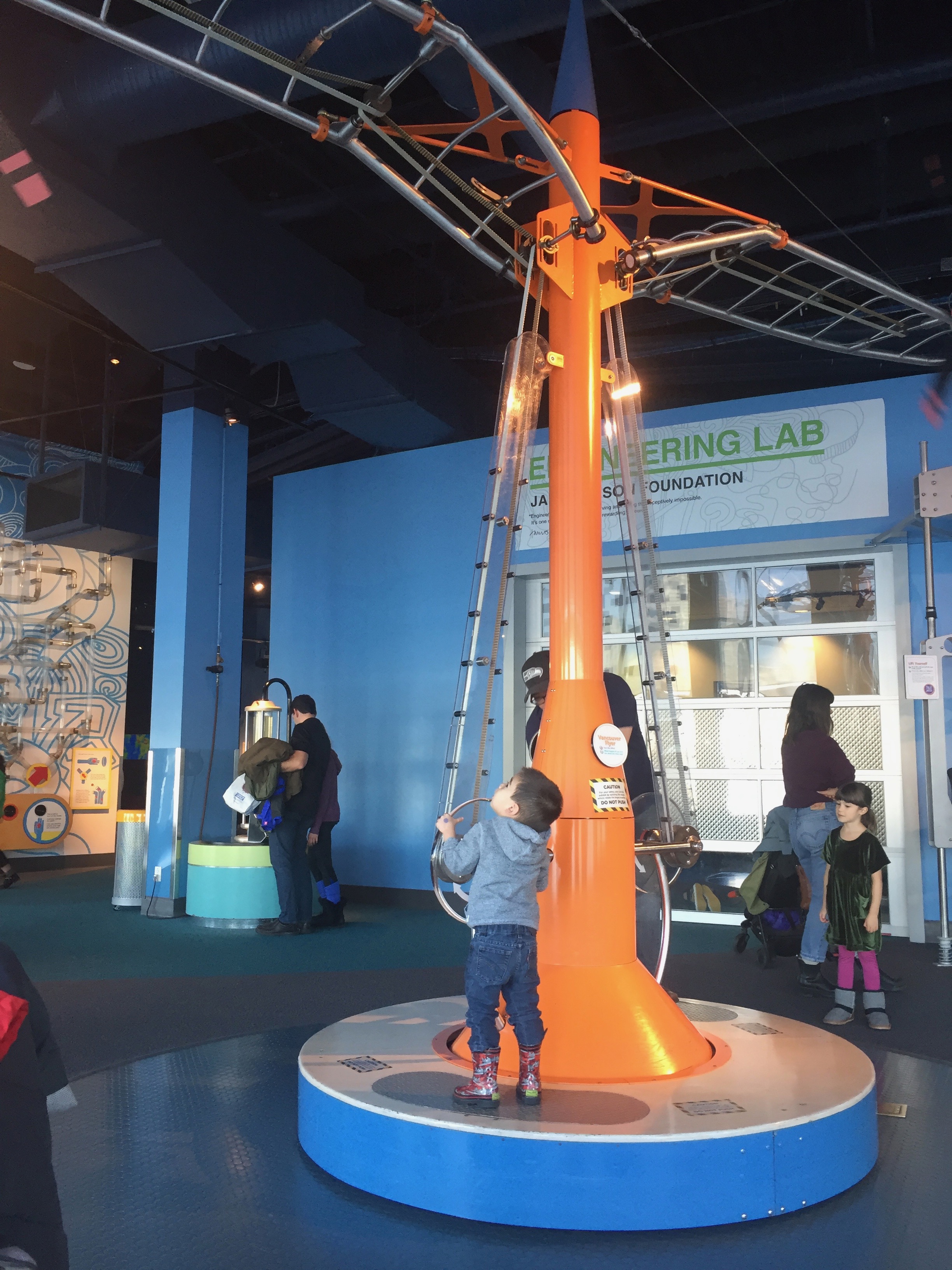 My son and husband thought this was a fantastic contraption and spent quite a bit of time testing out theories.

The next big hit were the virtual drums. They had circles on the floor that lit up when stepped on and made sounds. Some of them made drum sounds and some told jokes or made funny sounds. I sat there and watched almost every kid (and several adults) hop on them as they walked through the area.

One of my favorite things about this museum is that my husband enjoys it as much as our toddler! It’s fun to hear him explain the physics behind some of the stuff while my toddler pays close attention. Then, they end up laughing because they are having so much fun! It’s cute to see my husband get distracted trying to “win” at all of the stations while my toddler is ready to explore the next area.

The big hit for both of them was a large stand where they turned steering wheels to get the propellers to move, which moved the entire base around (like a merry-go-round.) My son spent about 45 minutes doing this by himself, with my husband and with other children. At one point a young toddler was placed on the base and she just was there for the ride! It was really cool to see my toddler study the whole thing and experimenting with changing the direction of the wheel to see what would happen. 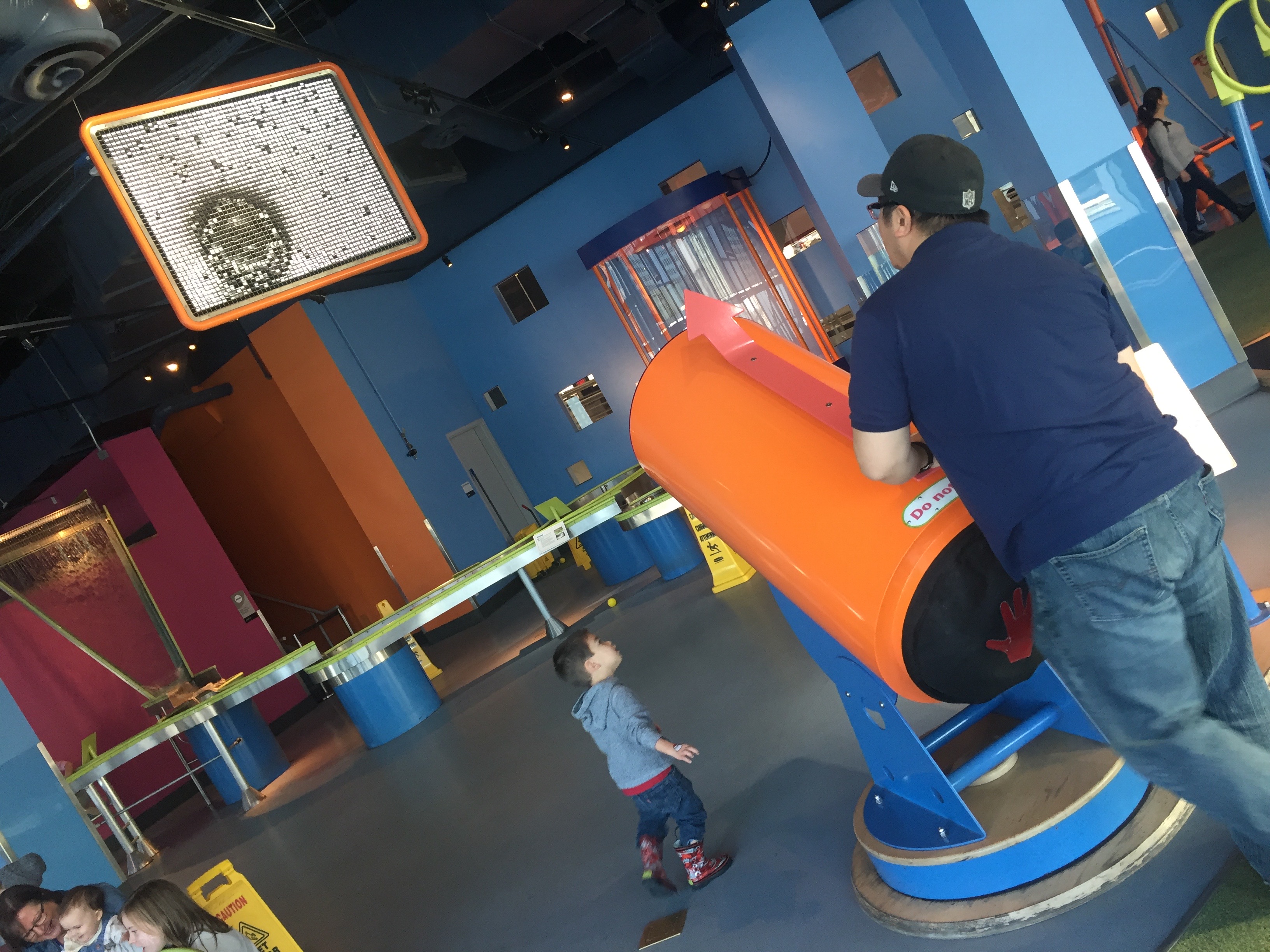 My toddler looks on as my husband shows him how the air cannon works.
My ultimate favorite thing about Science World is that it’s a great museum for parents to interact with their kids and show them how to problem solve. My toddler was completely occupied and engaged for hours. Had we not needed to head back to Seattle, we easily could have spent another couple of hours exploring the exhibits. 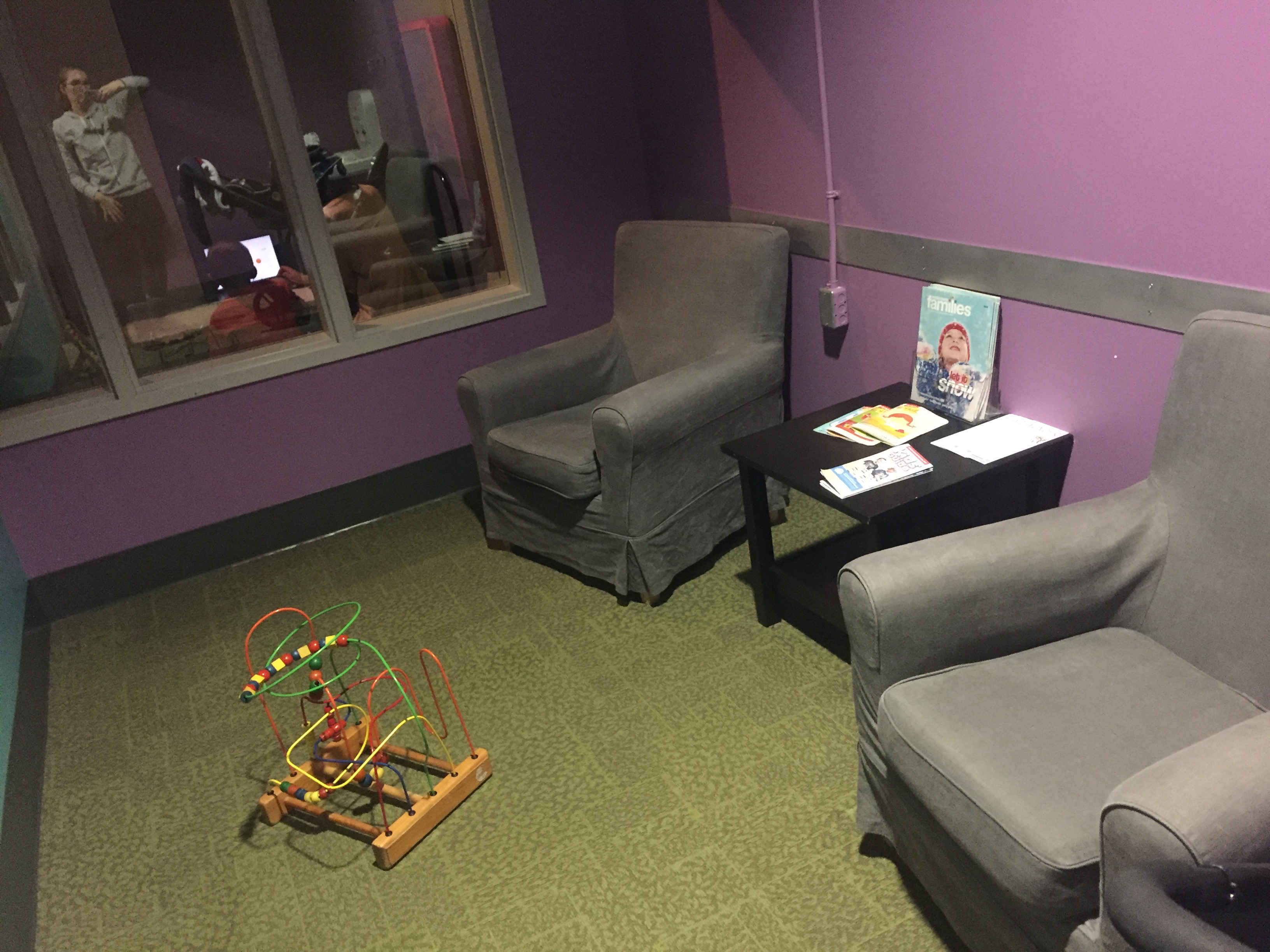 This nursing room is located in the Kidspace area and also features a changing table. 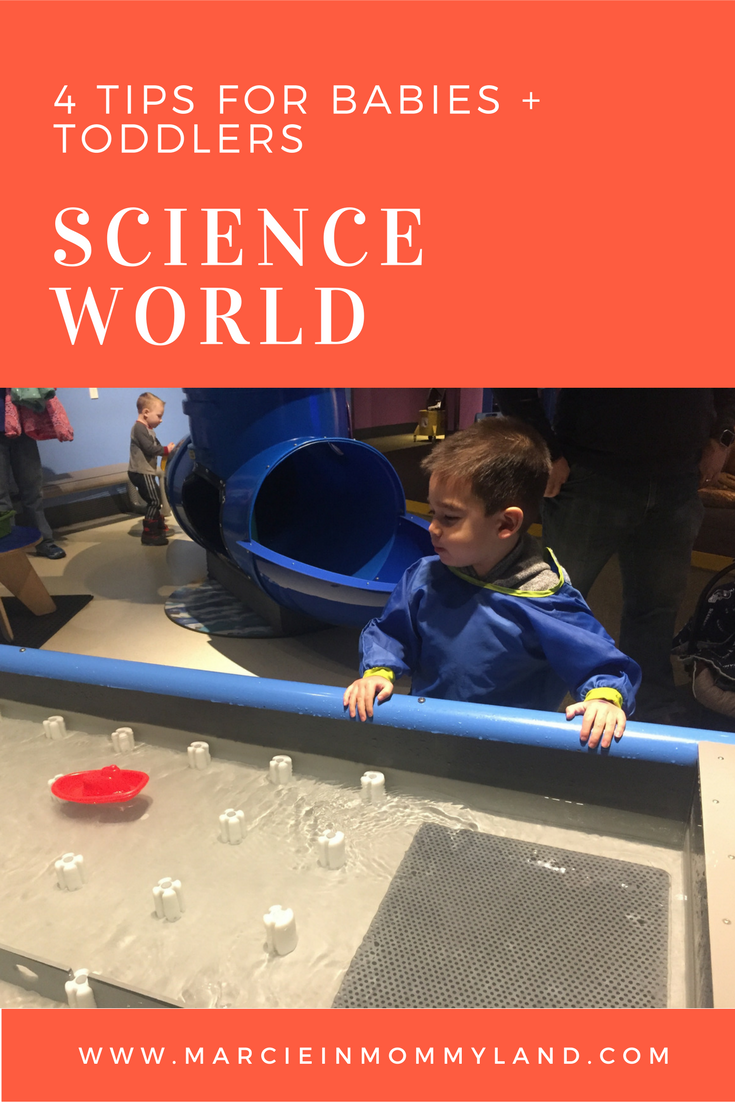 Hi, looks so much fun. Do you think an 11 month old would have fun or too young?

This looks like an awesome way to spend the day with the Littles! I want to take the girls to a science center soon.

That's one of the features I think people forget about when it comes to memberships. We've gotten into the habit of always asking if they partner Museums. And we always ask if there's a Boeing discount :)

Whenever we decide to travel that way, we will have to visit Vancouver's Science World, it looks like my little girl would love it!

It's a lot of fun! I have a few posts about fun things for kids in Vancouver, so check it out if you do head up this way!

This looks awesome! I love when they have open-ended toys like the water table; that tends to be where my 2 year old spends the most time. I love when museums and zoos partner up to help your membership fee stretch a little further. Will definitely have to check it out if we're ever in Vancouver!

Thanks, Sarah! Yes, there are so many places here where a toddler can literally spend hours doing one thing! I love that because each time we go, we hang out in a different spot!