Christmas in Seattle is such a fun time, especially with kids.

Our toddler was born just a few days after Christmas, so he was almost one before he experienced his first Seattle holiday season!

I really wanted to start some family traditions and I thought heading to Seattle to participate in their festivities would be a great tradition to start!

This year, we added a new member to our family and we were extra excited to include him in our holiday tradition!

My Mom was also in town so we were thrilled for her to experience it, as well. We grabbed our double stroller, our winter coats and headed out to explore the holiday magic of Downtown Seattle!

Christmas in Seattle: the Best Things to Do with your Family 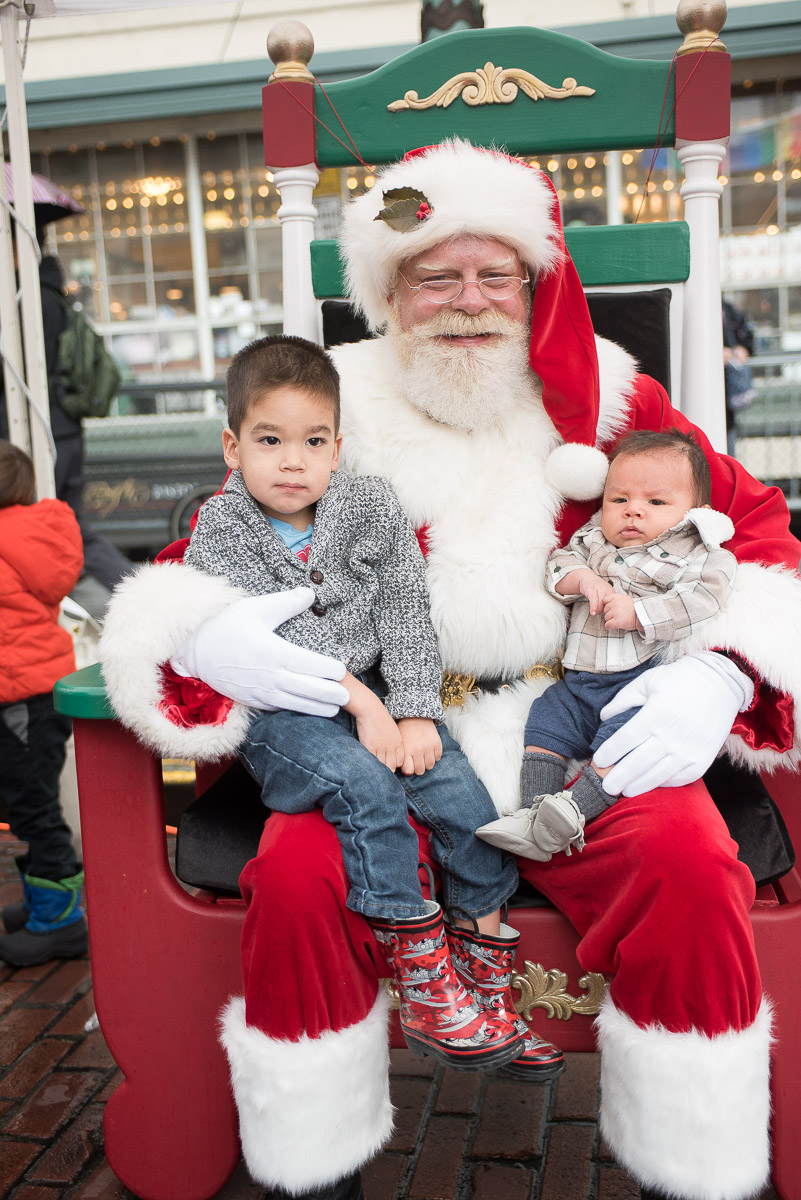 Our first Magic in the Market event with both boys and the first time that our newborn met Santa! He returns every year with his little elf for free photos!

Christmas in Seattle: Magic in the Market at Pike Place Market

We go on the Saturday after Thanksgiving each year because that’s when Pike Place Market offers their Magic in the Market event. They usually have cookie decorating, caroling and other festivities.

The coolest feature is free outdoor Santa photos with a retro truck! This is my favorite photo op of the year! We’ve never been able to stay to watch the tree lighting (darn nap times) but it sounds festive!

This year, the line took about 15 minutes and we met some friendly families in line. We even ran into our neighbor! It was easy to park our stroller off to the side and get photos of both our kids with Santa.

This Santa is always really friendly and very personable, which is appreciated. His helper elf hadn’t arrived yet, but seeing Santa was fantastic! My toddler was especially excited to grab a mini candy cane after the photos.

Then, we took photos in front of the green truck and piled everyone back into the stroller to head up the hill! 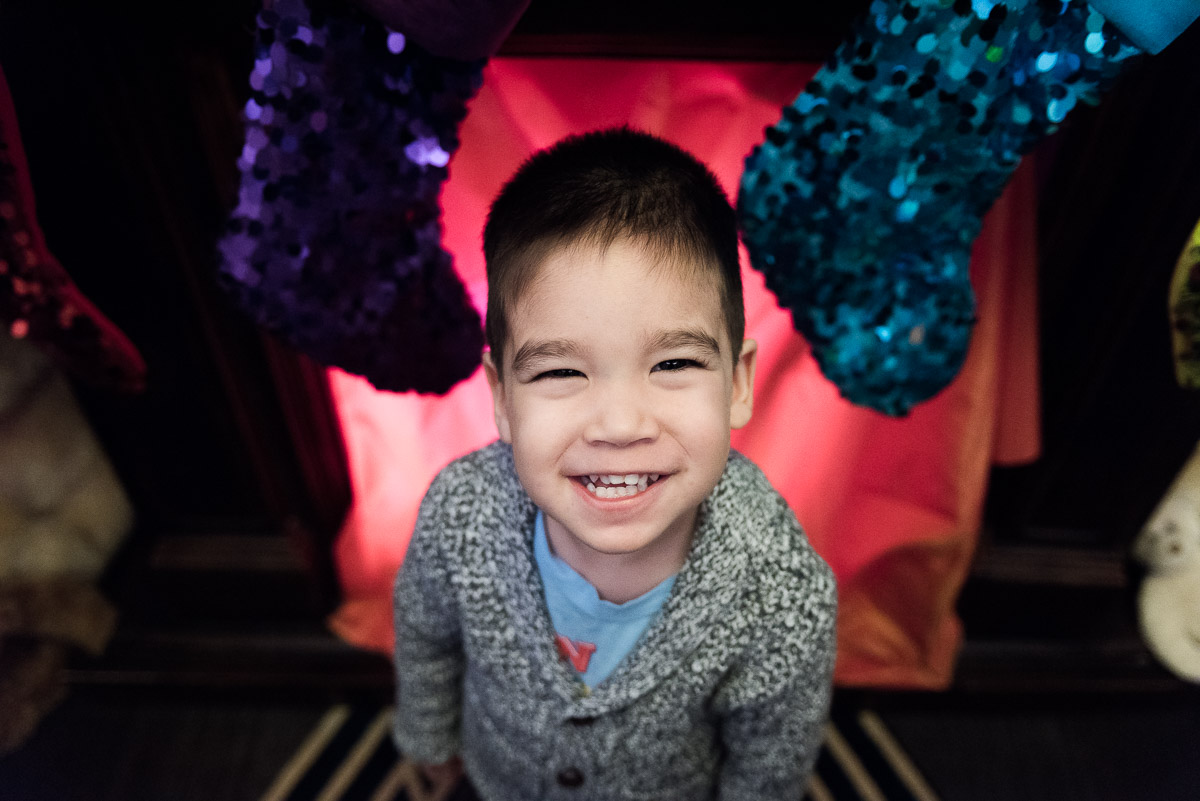 Even the entrance to the Fairmont Olympic’s Teddy Bear Suite was gorgeous!

In addition to the Magic in the Market, we always go to the Fairmont Olympic Hotel for their Teddy Bear Suite.

They transform one of their suites by having a designer create a new concept each year that features tons of furry teddy bears!

Visitors are allowed to enter just a few at a time so they can get photos and explore the suite. As you leave, kids can grab a candy cane.

In the lobby of the hotel they have their Festival of Trees. We enjoy walking around and seeing the unique themes of each tree. This is also a great place for a short rest and to feed babies/toddlers before continuing on.

This year, we were able to walk right into the suite without waiting in line. There was plenty of space to park our double stroller. There were only 2 families inside when we arrived.

It was my Mom’s first time there and she was in awe with the decor. I grabbed my baby and was excited to get photos with him. That’s when I felt something wet.

He had a blowout in his “nice” clothes and it got all over me, as well. Ewww.

Thankfully, the Health Club was on the same floor and I was able to take him there to change his diaper, wipe him down and put him in his extra clothes (which were not as cute.)

Then, I headed back into the Teddy Bear Suite and we got some lovely photos before going to the lobby to look at the decorated trees.

This is one of our favorite Seattle holiday traditions. 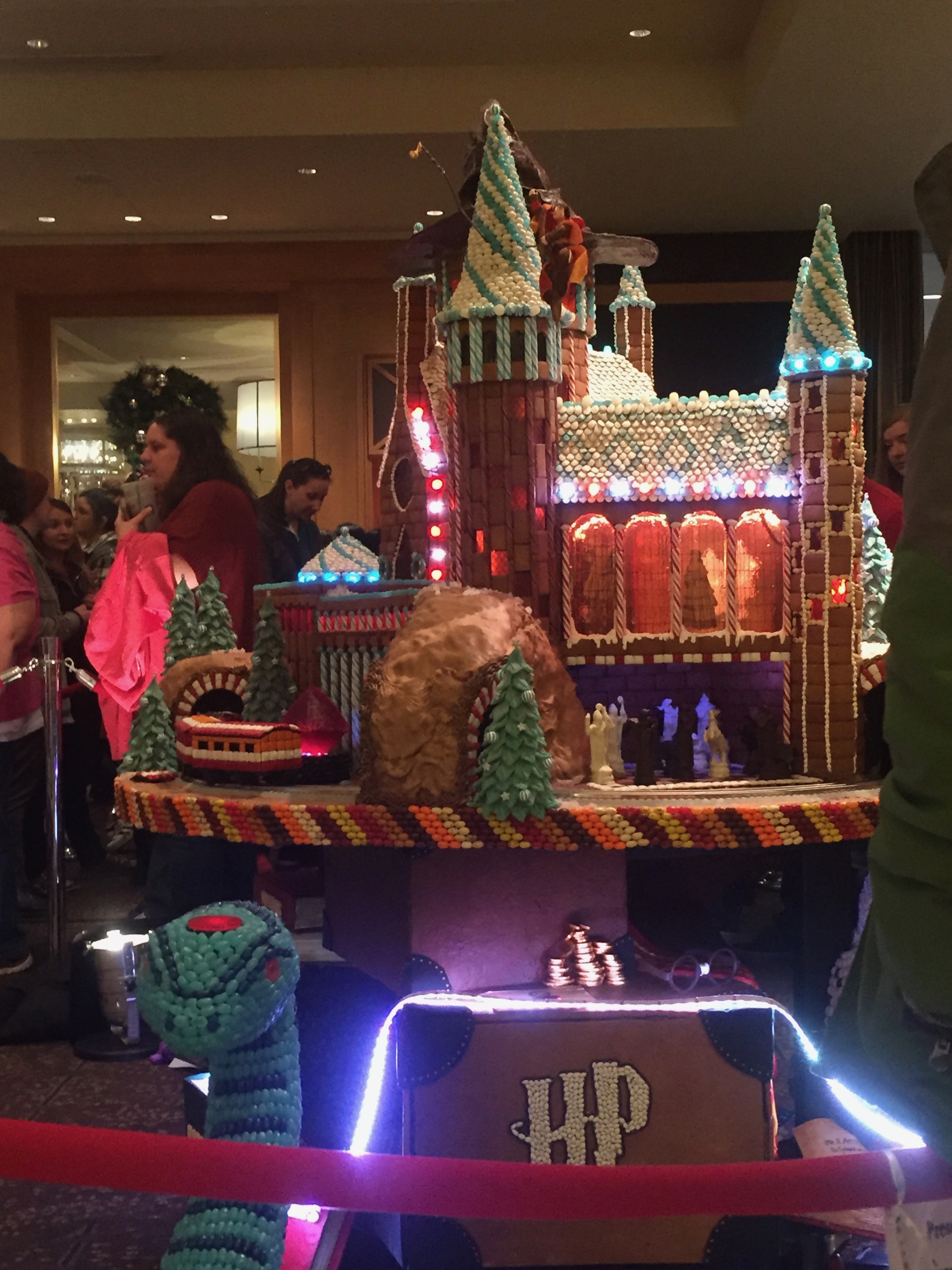 Our toddler couldn’t stop looking at the “gingerbread train” at the Seattle Sheraton’s Gingerbread Village.

Christmas in Seattle: Gingerbread Village at the Seattle Sheraton

Last year, we added the Gingerbread Village at the Sheraton to our Christmas in Seattle tour. The theme was Star Wars and my husband was giddy looking at all of the delectable creations.

This year, my Mom built a gingerbread turkey and a gingerbread Santa train with our toddler, so he was much more excited to see the gingerbread creations. He kept asking to see a gingerbread train and we were both surprised to actually find one there.

This year’s theme is Harry Potter and the creations are truly magical!

After waiting in line last year for about 45 minutes to look at the gingerbread, we realized that we could have just walked to the backside of the display without waiting in line.

Since we had a baby and a toddler with us (and we did this at the end of our festivities) we opted to skip the line and just look at the back side. The major drawback to doing this is that we didn’t get to see a lot of the display.

But, it was still really spectacular and it saved us a lot of stress. And we were still able to donate. 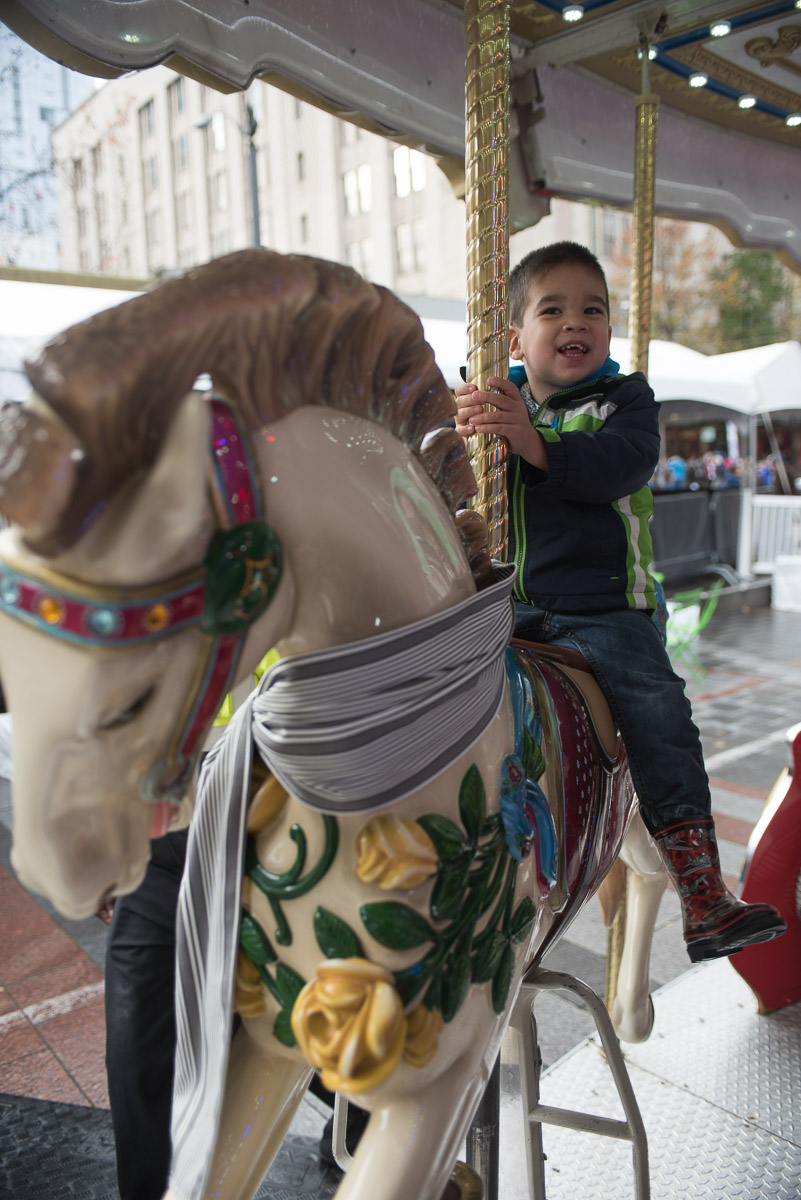 Our son was so excited for the outdoor carousel that he rode it twice!

This year, we added in the Carousel at Westlake Park to our Christmas in Seattle holiday tour.

Our toddler has been obsessed with riding a carousel ever since we rode them at Point Defiance Zoo & Aquarium a few months ago.

I really wanted to take our toddler on it last year, but it was so cold out that we thought we should head indoors to warm up before heading home.

Since we had our infant with us in a stroller, I stayed with him the first time so my Mom and husband could ride with our toddler. He had such a blast that he insisted I ride with him.

The rides are a suggested $3 donation to Treehouse, so it’s was an easy sell for us to ride again. The staff were really friendly and accommodating to us. 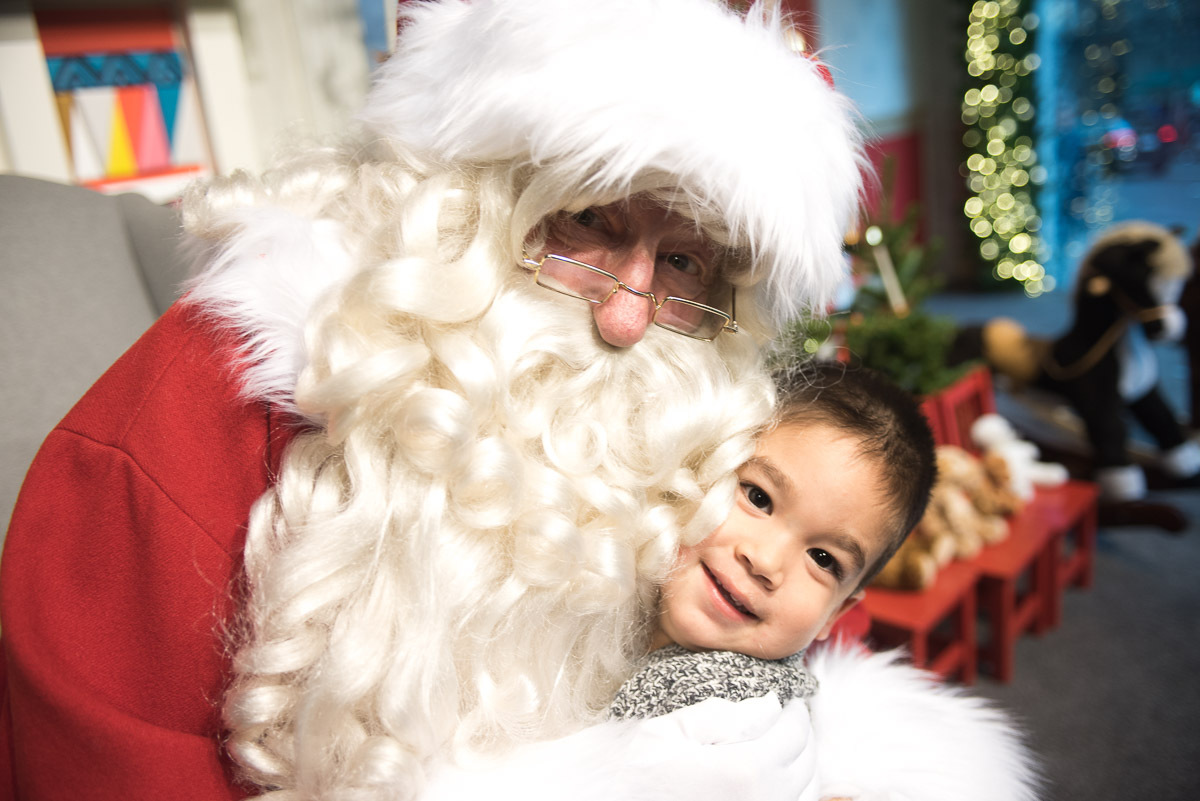 After years of trying to visit the Downtown Nordstrom Santa, 2017 was the year we finally did!

My Seattle holiday dream has always been to do Santa photos at the Downtown Nordstrom.

The line is always really long and hasn’t worked into our schedule. The first year we tried, it was an 8 hour wait!

I think the best idea would be to stay Downtown the night before and have someone walk over to Nordstrom to get your name on the list and then bring kids over right before their time, so they are rested and fed and will be happy in photos.

When we got Downtown this year, we were elated to find that the line was only 3 hours long! It was our first stop because we hoped to get on the list early.

My husband and I were literally dancing in the street because the timing was perfect!

There were a couple of ladies who overheard us and exclaimed “Who would wait that long to see Santa!?!” We just laughed because it’s exactly what we had hoped for!

This gave us ample time to do the rest of our stuff and save Santa for the end of our day.

The staff was beyond fabulous! We were offered cookies while we waited inside and they had really yummy hot cider that wasn’t too sweet. They only had 2 families at a time in Santa’s room, which was really well thought out.

When it was our turn, we got to chat with Mrs. Claus before heading to see Santa himself. It was nice because we were able to take photos with our own camera and the photographer even snapped a few of all of us!

We also took some video to capture the interaction between our toddler and Santa. It didn’t feel rushed and our toddler felt very comfortable with him. It was everything I had hoped it would be! 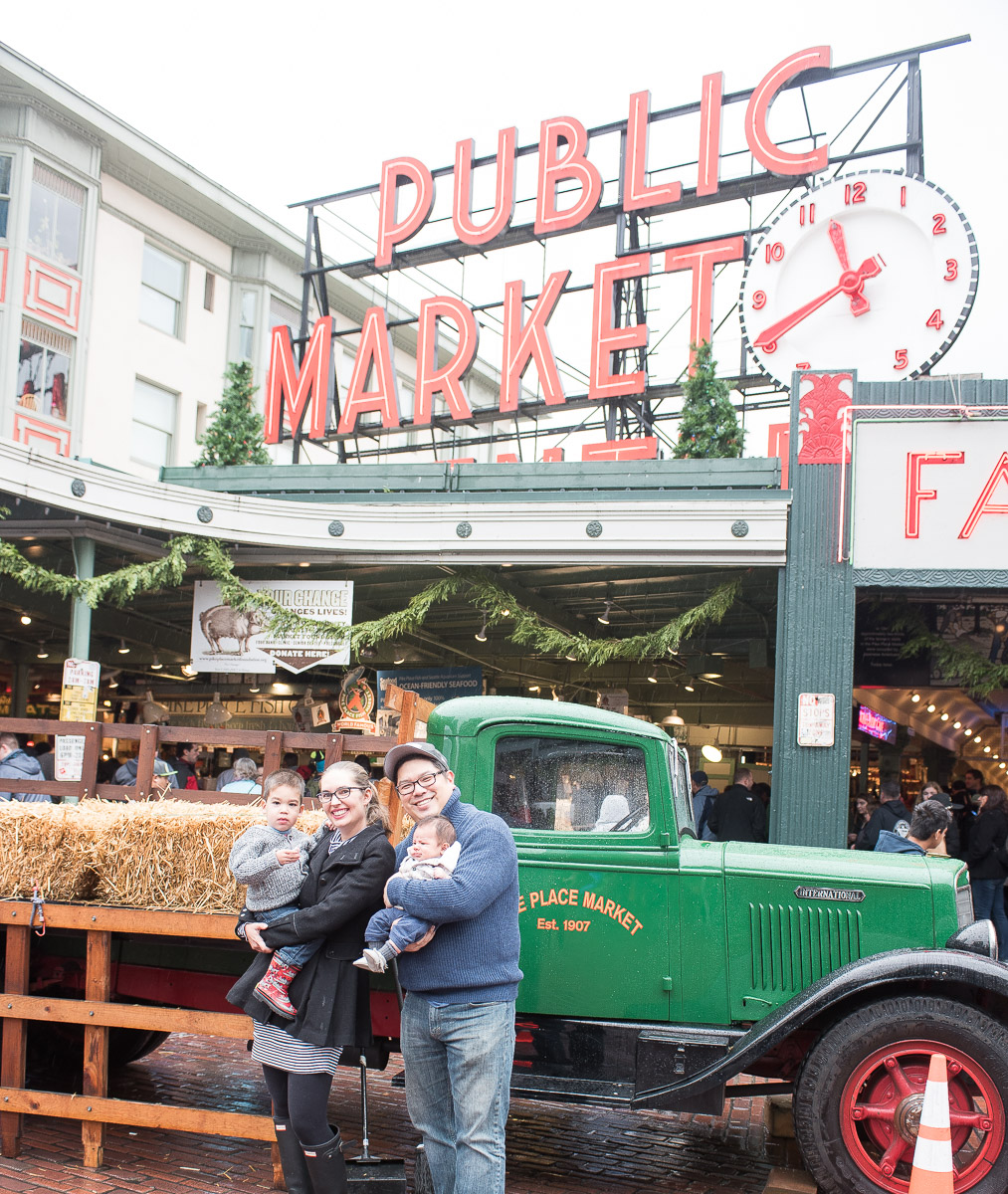 Our annual holiday photo in front of the truck at Pike Place Market.

9:20 a.m. Got our name on the Nordstrom Santa List (told it was a 3 hour wait)
9:25 a.m. Looked for breakfast options and settled on Belle Epicurean at the Fairmont Olympic
10:30 a.m. Explored the Teddy Bear Suite at the Fairmont Olympic
10:40 a.m. Our infant had a massive blowout
10:50 a.m. After a diaper and wardrobe change, went back to the Teddy Bear Suite
11:00 a.m. Toured the Christmas trees in the lobby of the Fairmont Olympic Hotel
11:15 a.m. Walked to Pike Place Market
11:25 a.m. Got in line to see Santa at Pike Place Market
11:40 a.m. Got the text from Nordstrom that we could head to Santa’s Lane
11:45 a.m. Took Santa photos and photos in front of the Pike Place Market sign
12:00 p.m. Arrived at Nordstrom
12:30 p.m. Finished photos with Nordstrom Santa
12:40 p.m. Nursed infant in Women’s Lounge at Nordstrom
1:10 p.m. Rode the Westlake Center Carousel twice
1:30 p.m. Got Fisher Scones from the food truck
1:40 p.m. Arrived at Gingerbread Village at the Seattle Sheraton and headed to the back side of the display
1:50 p.m. Got in our car and headed home.
Let’s keep in touch: Facebook, Twitter, Instagram, Pinterest 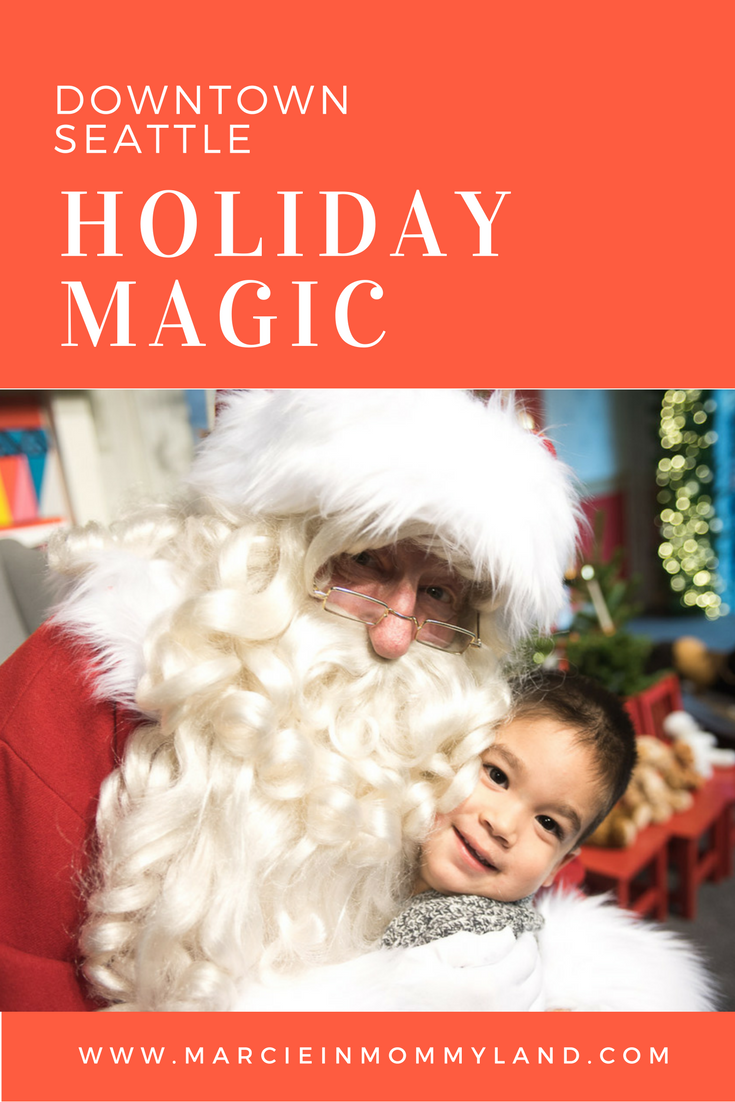