In celebration of my Mother-in-Law’s 70th birthday, we all got together for a trip to Maui. Since we were all going to be together, we thought we should do a special activity with everyone. We decided that since she loves to swim and make memories with the grandkids, doing a snorkel trip might be the right fit.

I did a lot of research on the various boat trips we could do on Maui. Since we’d be bringing our 2.5-year-old, I was a bit worried that he would be stuck on the boat the whole time and get restless. Many of the boats seemed geared for kids ages 8 and up, which would have worked for everyone except our toddler. When I found the Four Winds Maui, their website featured small children! Jackpot! 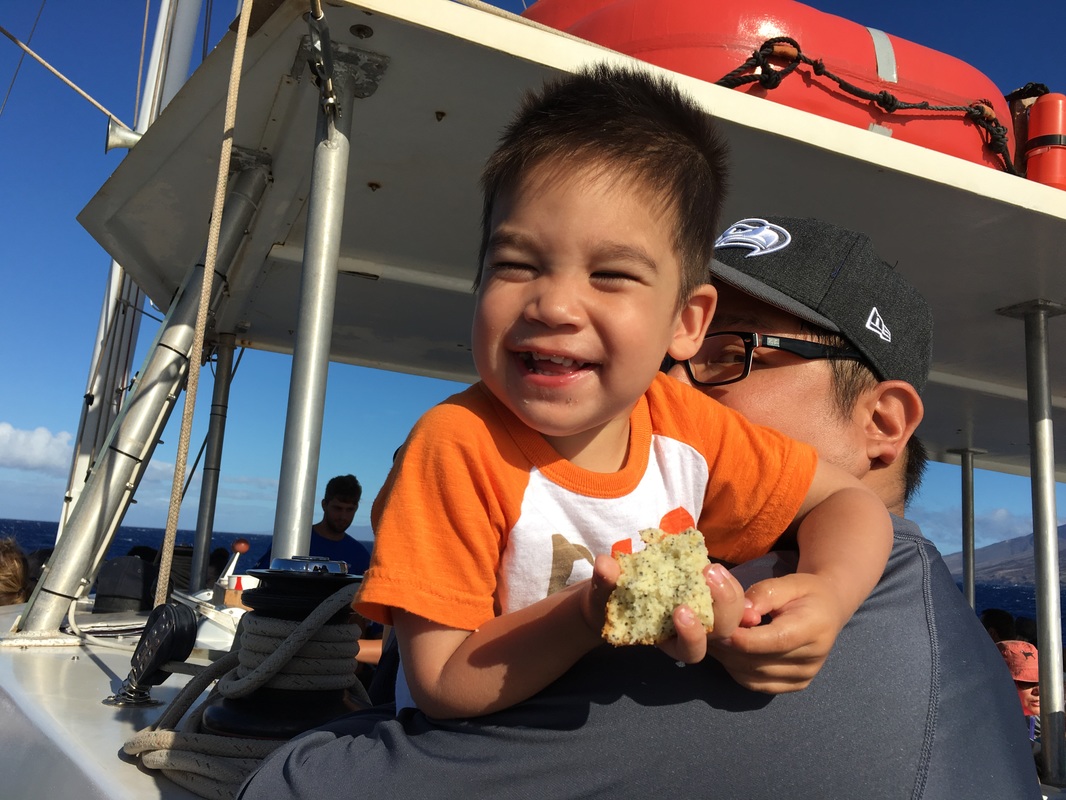 We were told to arrive by 7am for our 7:30am departure. The website said to park in slip 55, but the boat ended up being in slip 80 which was a decent walk for our group of 14 children and adults. We followed several groups who were also confused where the boat was. This confusion made us feel a bit rushed and by the time we got on the boat, there were very few seats available.

When we were all settled, the Captain introduced himself and explained a bit about what the plan was for the day. It sounded like things would be set for Molokini, but there was a chance that the wind was too bad and the waves would be too choppy. We were going to try to make it, though. Then the sales pitches started for snuba, underwater cameras, underwater photography services, wet suits, etc. I already knew about them because I combed through the website before booking, but some people in our party felt like it was a little much and they just wanted to get going. Some of our family headed downstairs to get drinks and grab fruit and muffins.

We headed out of the harbor and the waves started to get choppy after about 20 minutes or so. My toddler kept shouting “wee” when he was hurled from left to right but my nephew felt a bit overwhelmed with all the movement. The Captain announced that we’d be turning away from Molokini so that we’d have more time to snorkel and he brought us to Coral Gardens. They passed out the fins and snorkel masks on the ride out there and offered a snorkel class on board right before we anchored. 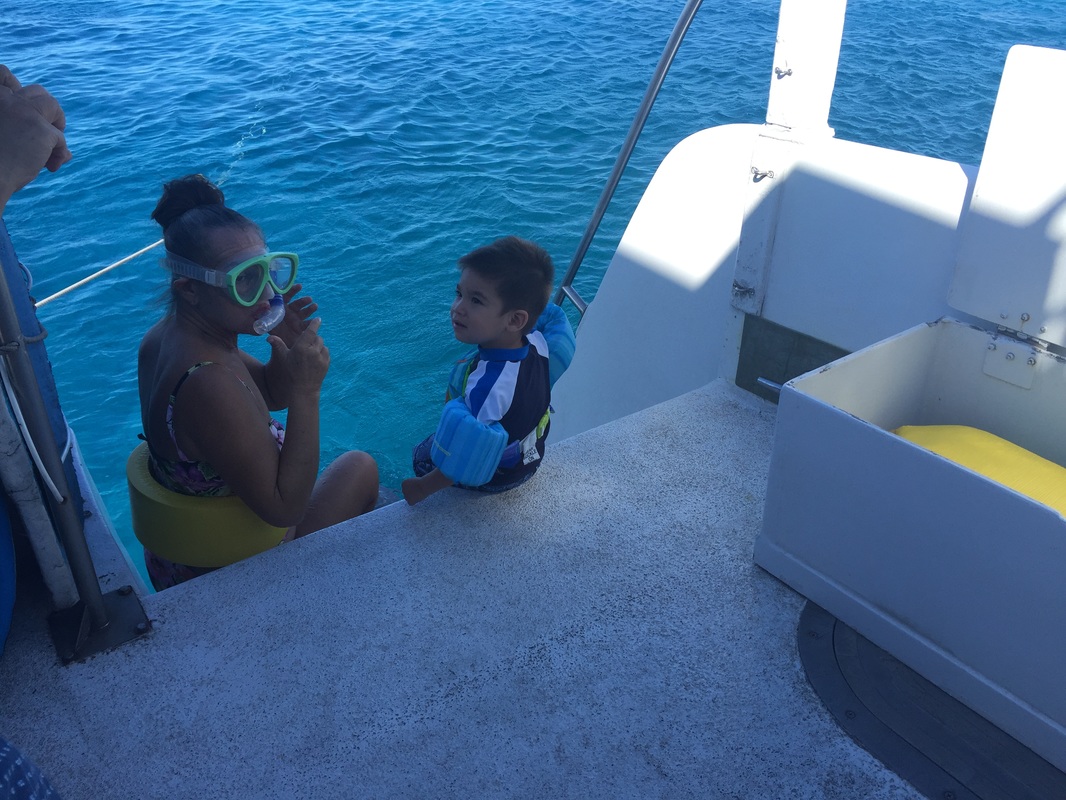 At Coral Gardens, we had 2.5 hours to snorkel. Since I didn’t plan on going in the water, I thought I might get bored with that much time on the boat. I was totally wrong! I couldn’t believe how quickly the time flew.

We let the masses get into the water while I hung out with our toddler on the upper deck. We watched many family members get into the water and start snorkeling, which my toddler found fascinating. He really wanted to go into the water too, so my Mom and Mother-in-Law decided to go out with him. The Four Winds Maui has cool floatation devices with a peep hole for kids to lay on to look at the fish. The crew members were really helpful bringing them the floatie and helping our toddler! They loaded my toddler (wearing a life vest and water wings) onto one of those. My Mom and Mother-in-Law pulled him around the ocean so he could participate. Almost instantly, all his cousins swarmed the flotation device and my son was in heaven being a part of the experience! 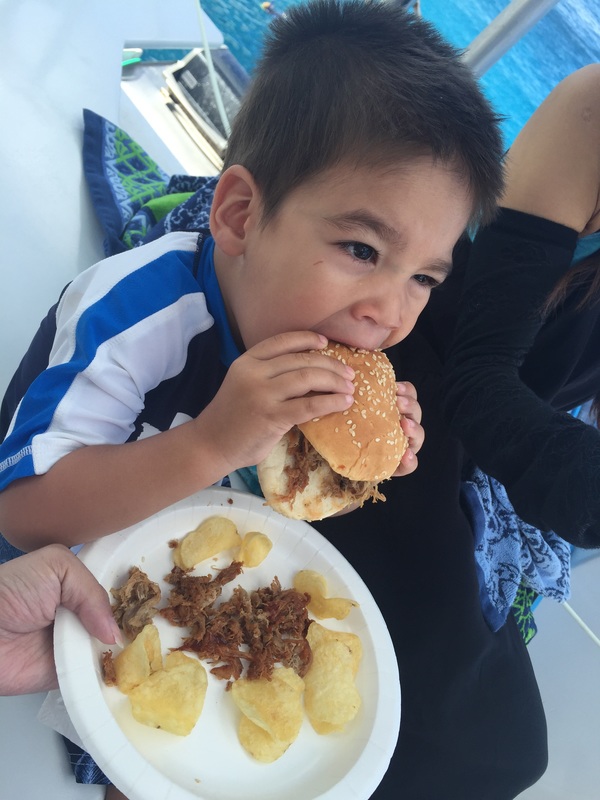 While he was in the water, I took lots of iPhone photos and video. Then I headed inside to grab lunch (at 9:30am). They had hot dogs, kalua pork sandwiches, burgers and chicken. They had lots of burger toppings, ketchup, mustard, BBQ sauce and hot sauce and potato chips. There was also an assortment of drinks (both alcoholic and not.)

By the time I grabbed some food and water, my son and most of the family were ready to come back on the boat to warm up and get food. My toddler devoured half my kalua pork sandwich (which was really tasty) and at least one cup full of chips. As time went on, the majority of swimmers all came on board to get food. This was perfect timing because we were all done eating and ready to hit the water again! 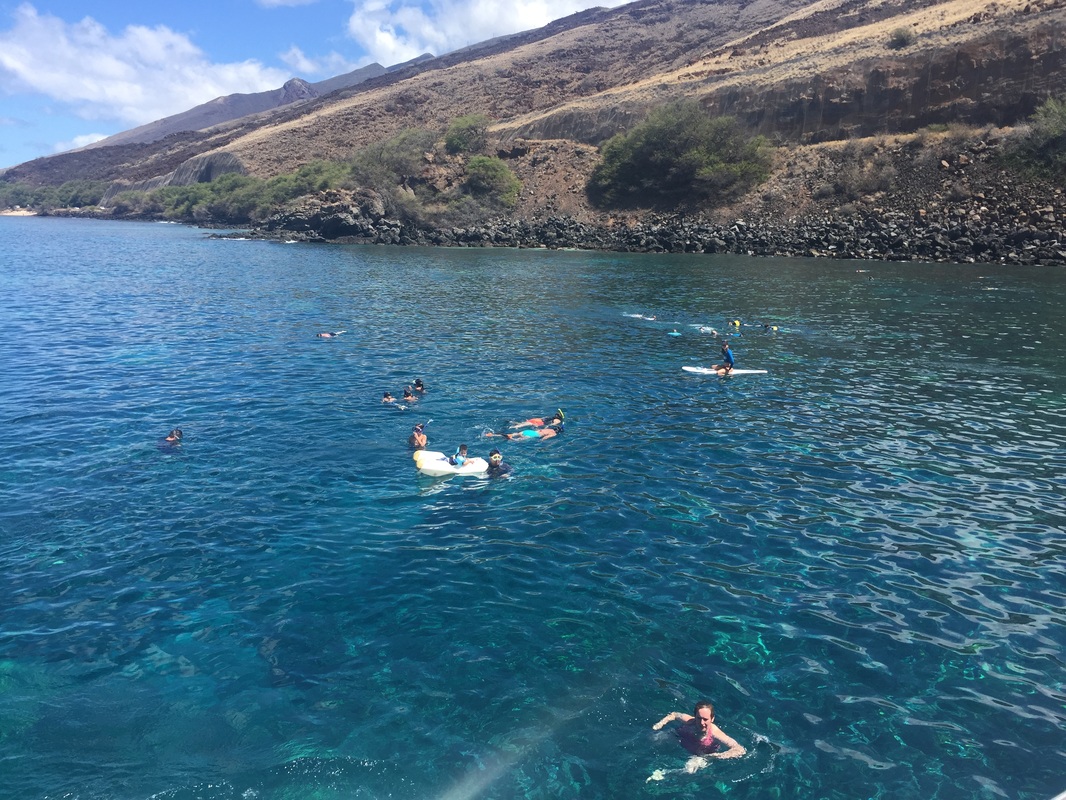 Snorkeling at Coral Gardens from the Four Winds Maui

My son really, really wanted to go down the waterslide and his cousins offered to go with him. I took him down there and the slide looked awesome, but too intense for a 2.5 year-old. Maybe he’d be ready in a year or two. But my nieces and nephews all went down the slide and had the time of their lives! They are all very experience swimmers and they were able to try going down on their tummies and backwards! I held my son while we watched his cousins fly down the slides and he was giddy just watching them!

Then, he said he wanted to go back into the water. My husband was already back out there snorkeling. I shouted for him to meet me at the back of the boat so he could grab a flotation device. Our son swam/floated for awhile before he was all done and wanted to head back up. It was good timing because we only had about 15 minutes of snorkel time left before everyone came back on board and we headed back to the harbor. On the ride back, we were offered chocolate chip cookies that were also very tasty!

After about 5 minutes in the car, our toddler was passed out and stayed asleep for quite some time! When he woke up, he kept going on and on about the boat ride and swimming and watching his cousins on the slide. This was a great adventure for our whole family!

Was it a large boat? My husband gets seasick easily and we have a 3yo and a 9mo, I figure I can't take both in the water if he has to take care of himself :-/ He fares better on large boats (less wavy movement when anchored?). Your write up makes me really want to take my family to do this for our trip to Maui next month!

I'd say it was a medium sized boat. There was a small area downstairs where they did the buffet breakfast and lunch and then a larger area up top. I'm prone to motion sickness (plus I was pregnant) and I was fine. I don't think I saw anyone get sick on board. You might contact them directly to get a better sense of the size of the boat. Either way, have a blast on Maui!

This sounds like so much fun and looks like y'all are having the time of y'alls lives.

It was a great memory!

It sounds like an amazing adventure for the family and it's so nice that your son got to experience it as well. He might be too young but he still had a great time so that makes it worth it.

Omg how fun!!! We are going on vacation in july and we're thinking of adding snorkeling to our schedule. Looks like it would've loads of fun

I'm so glad you were able to find something to accommodate all of you! Thank can be the trickiest part of family vacations. I've never been snorkeling. I am going to put it on my bucket list now. ;)

I don't snorkel and I still had a great trip!