Home » Pacific Northwest » Things to do in Stanley Park in Vancouver, BC with Kids

Are you planning a trip to Vancouver, British Columbia in Canada? Find out the best things to do in Stanley Park in Vancouver, BC with kids.

This post about things to do in Stanley Park was originally published August 5, 2016 and updated April 13, 2018 and may contain affiliate links, which means if you click on the link and purchase the item, I will receive an affiliate commission at no extra cost to you. All opinions remain my own.

Stanley Park is Vancouver’s number one tourist attraction. It’s easy to see why, especially in the summer. There are so many things to do in Stanley Park that one could easily spend several days here exploring all the options.

We had the opportunity to visit with my toddler while I was 7 months pregnant. That meant we really had to pick and choose what activities we could manage.

We wanted to see the park and also do things that were especially fun for our toddler.

Here’s what we ended up doing:

I had always seen the horse drawn carriage rides when we have driven through Stanley Park in the past, but we never looked into it.

This time, I decided it would be the perfect way to start our day in Stanley Park. My toddler was especially excited since he had his first pony ride just days earlier. He couldn’t believe how big our horses, Andy and Jay, were!

We sat right behind the driver and as soon as the carriage filled up, we slowly trotted on our journey. 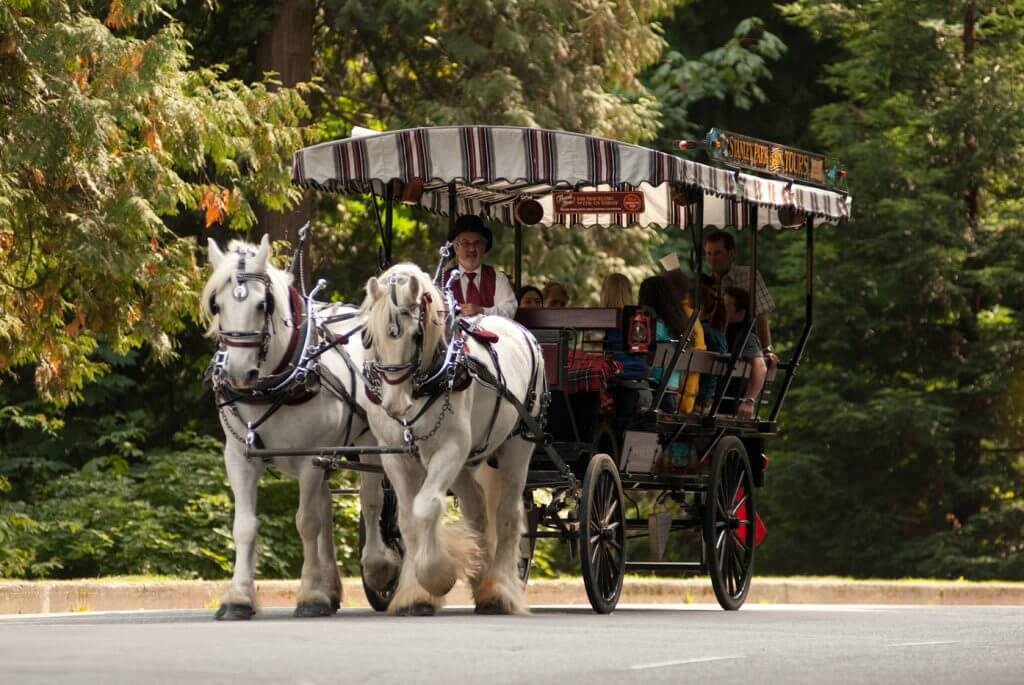 At first I thought the ride was a bit bumpy, but after a few minutes, I didn’t notice it at all. Our tour guide had a lovely presentation of facts mixed with stories about the people and places of Stanley Park.
We had five minutes to get off and look around the Totem Poles and the waterfront, but the rest of the time was spent in the carriage. We really enjoyed the breathtaking scenery! 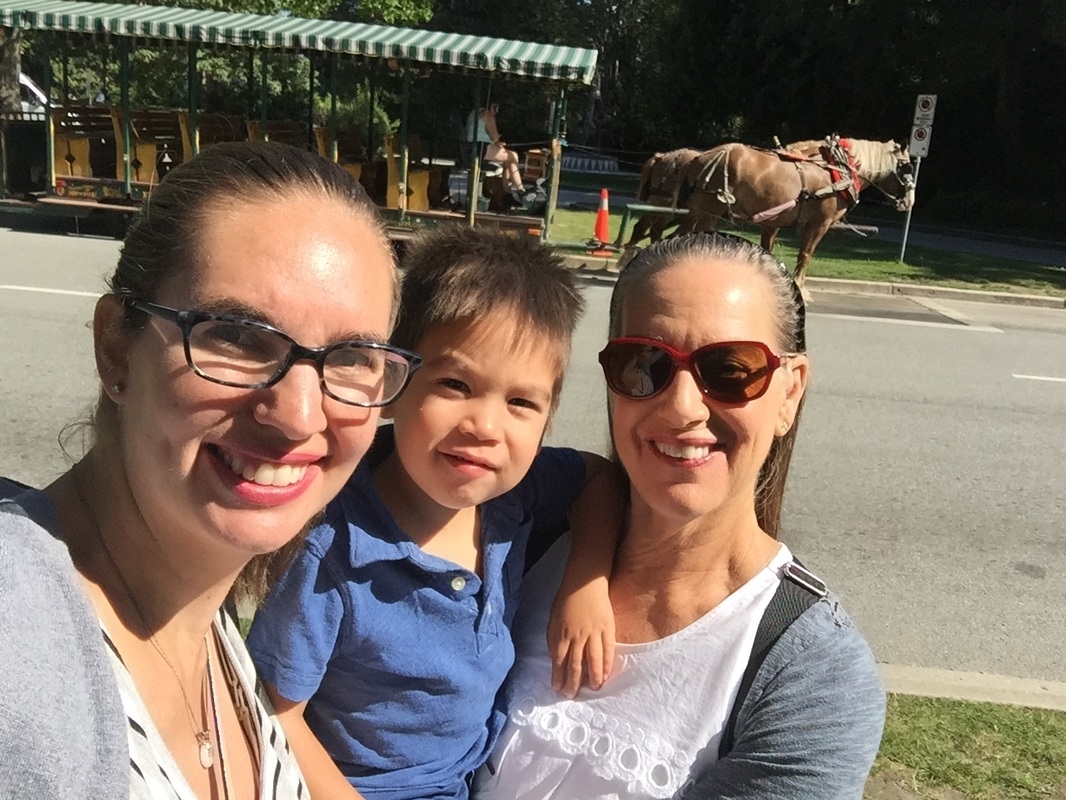 [irp posts=”1755″ name=”Four Days in Vancouver, BC with a Toddler Itinerary”]

Every year, we come to Vancouver for my son’s birthday, which falls right after Christmas. Every year, I suggest that we do the Stanley Park train, but it never works out with our plans. So, we made it a priority to do it this trip.

My toddler is a big fan of trains and he loved every minute of this! I assumed that it would be similar to the Horse Drawn tour where we’d go around the park.

It never occurred to me why I’d never seen the train in action before. It’s tucked away in the woods!

The conductor drives a miniature version of a steam locomotive and you meander through the woods checking out sights like Big Foot, Charlie Brown, Foghorn Leghorn, Kermit the Frog and more!

Besides spotting the characters, the journey is actually pretty stunning as the train roams the forest of giant trees, through a tunnel, crosses a tiny brook and around a beautiful pond.

It’s about a 12 minute ride and it feels like the right length.

It was so fun that we will definitely come back, especially for their Stanely Park Christmas Train. 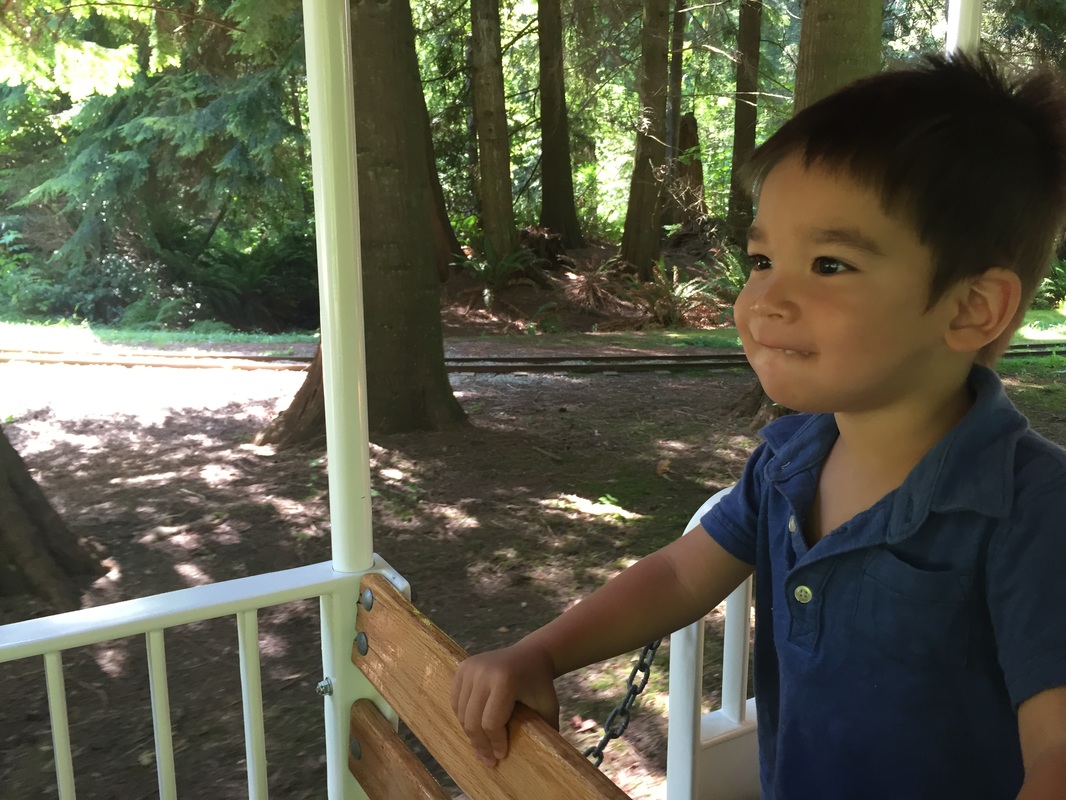 My toddler was thrilled to be on the Stanley Park Miniature Train Ride! Photo credit: Marcie Cheung

We opted for a quick lunch at the nearby concession stand so we could head back to our hotel for a quick nap.
My toddler decided he didn’t want to nap (he told me he was too excited for the bus ride), so after resting a bit, we got on the Hop-on-Hop Off Bus to explore the city and stop at the Vancouver Aquarium.

If you are headed to the Vancouver Aquarium, Waterfall Cafe might be a great place to stop for lunch. It’s located just a few minutes from the Stanley Park info booth.

Their sunny patio is a nice place to enjoy a bite and take in views of the Vancouver Aquarium, the 300 year old Western Red Cedar tree, and Bill’s Reid’s Chief of the Undersea World sculpture.

The Waterfall Cafe is open from June to September, and admission to the Aquarium is not required.

If you want to enjoy a leisurely meal, check out the Tea House at Stanley Park. They offer seafood dishes, steak, pizza, brunch and many other kid-friendly menu options.

It’s a higher end restaurant and the view of Stanley Park is incredible!

Vancouver Hop On Hop Off Bus

The Hop On Hop Off bus ride was a lot of fun! I loved the open air top because I could really experience the city. My toddler had a blast for the first 30 minutes and then he fell asleep…hard.
It was a bit difficult to hear the narration and announcements, but it was such a relaxing way to see the city. I love bus tours and would definitely do this one again.
The only downside was when we were dropped off at the Vancouver Aquarium, we didn’t know that the last bus was an hour and a half later. Had we known, we would have planned accordingly.
I wish they would have handed us a brochure with the times on it.
We ended up (fortunately) hailing a taxi after we realized the last bus came before the Aquarium even closed. 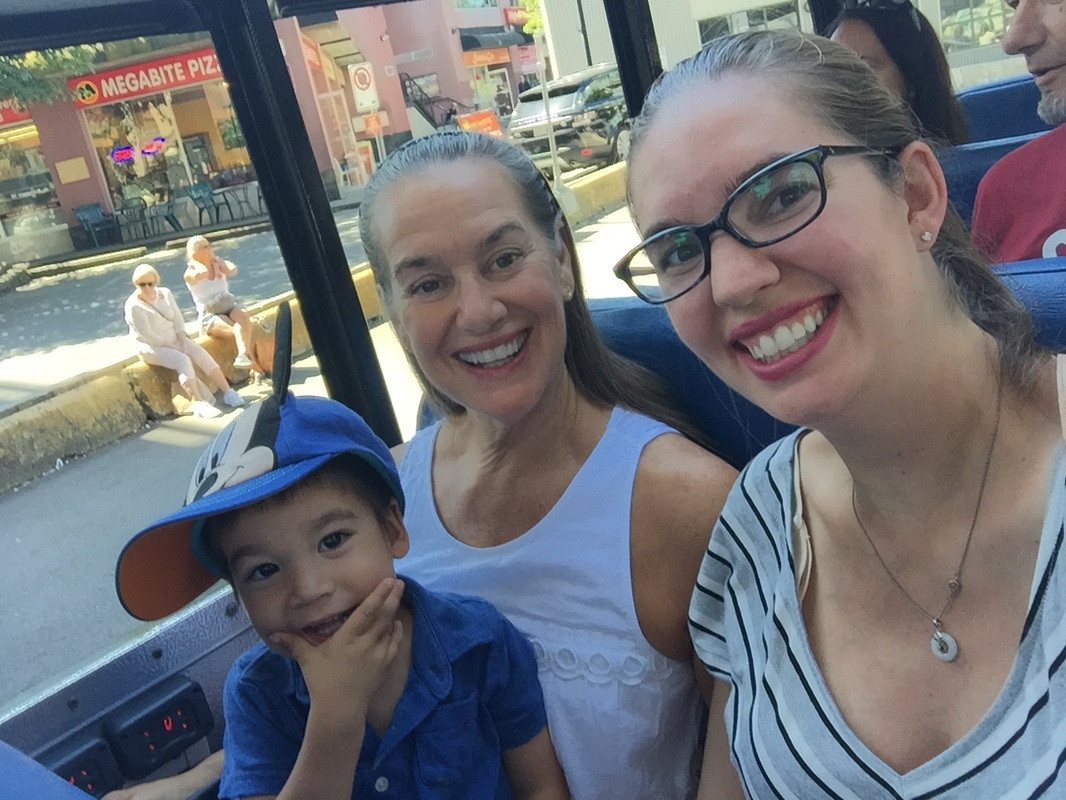 My toddler was too excited to nap when he heard we were going on the Hop On Hop Off Bus Tour in Vancouver. Photo credit: Marcie Cheung

Vancouver Aquarium is the largest aquarium in Canada and it was recently expanded. I had been before several years ago in December and remember it was cool, but nothing specific.
By the time we arrived to the Aquarium, my toddler was pretty worn out and didn’t really want to explore too much. I gave him a quick snack and we did a speedy walk thru of the Tropical Fish and Amazon area. 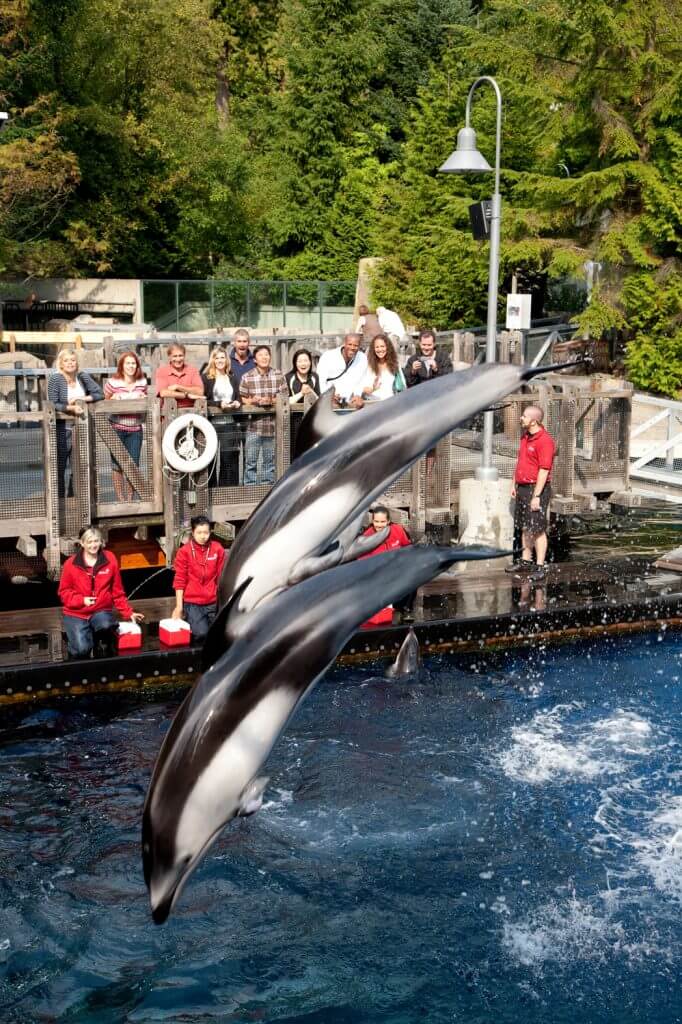 My son really wanted to head outside, so we headed out. This was my favorite part! We don’t have big mammals at our Seattle Aquarium, so it was a real treat to see the belugas and the dolphin!
I wanted to explore more, but my toddler saw the ice cream stand and didn’t want to do anything else.
He had a huge tantrum when we tried to look at the belugas and we ended up spending the rest of our time at the Aquarium eating a quick dinner and getting ice cream.
Next time, we’ll try to do the Vancouver Aquarium in the morning when moods are better. 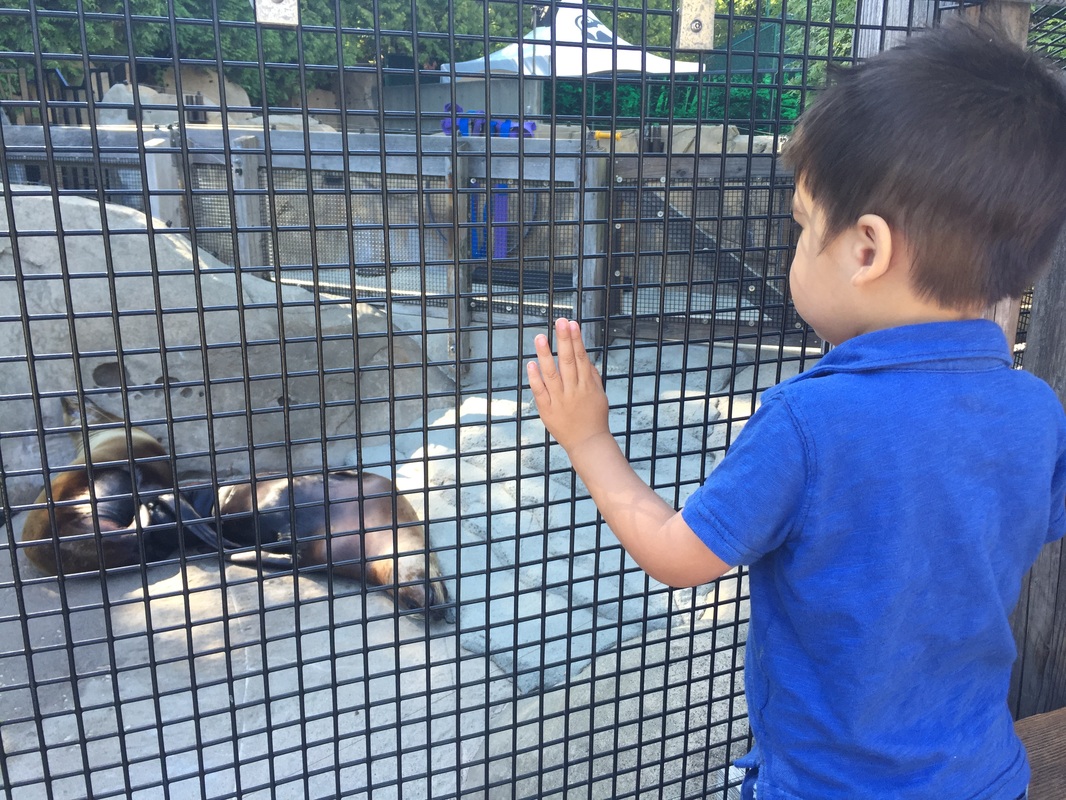 Checking out the Sea Lions at the Vancouver Aquarium at Stanley Park. Photo credit: Marcie Cheung

Get off the beaten path of Stanley Park and find out the tragic history of Deadman’s Island, discover the location of a long lost indigenous village known as Whoi Whoi, see trees that are hundreds of years old and more!

This 90-minute walking tour is led by a First Nations descendant and cultural ambassador. See how the tour aboriginal people lived and managed the land, the forest and oceans for countless generations.
It’s just over a mile long and is a great educational activity for families.

Something that we didn’t do this trip, but would love to do next time we’re in Vancouver in the summer is to rent a bike in Stanley Park. I’ve found a couple of companies that offer services to families with young children.

And you can always do a private bike tour. 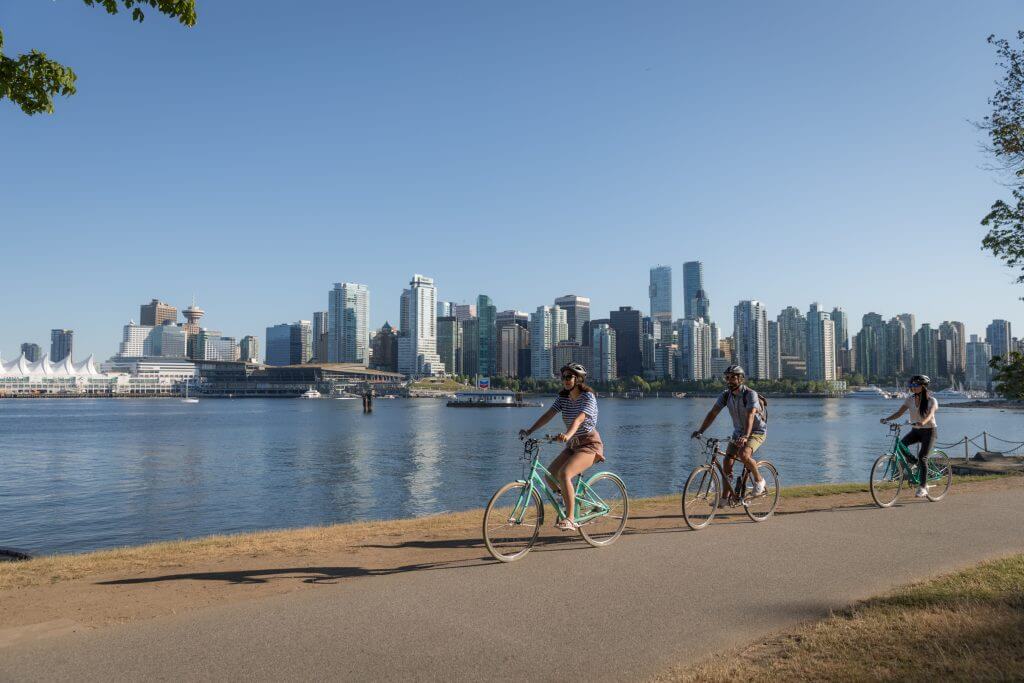 Stanley Park is a beautiful place to rent a bicycle and explore Vancouver, BC. Photo credit: Tourism Vancouver/ Rishad Daroowala

Conveniently located at the entrance of Stanley Park, Spokes Bicycle Rentals has been serving Vancouver locals and tourists since 1938. They have the largest selection of the newest bicycles and offer complimentary helmets and locks.

Another option is English Bay Bike Rentals, which offers kids’ bikes, child trailers, child seats, and junior mountain bikes. They have 12″ and 16″ kids bikes that are available with or without training wheels.

And they have the Weehoo tag along bike that attaches to their Hybrid or Crosstail bikes and gives kids the ability to pedal along and enjoy riding while an adult does the work!

You can also book a private family tour if you’d like a guided tour around Vancouver with kids.

If your kids just want to run around, check out some of the Stanley Park playgrounds! There are four designated children’s playgrounds located near other Stanley Park attractions and activities.

Plus, the park itself is one big Vancouver playground!

What better way to watch a movie than to experience an outdoor movie at Stanley Park? During July and August (weather permitting) families can watch movies every Tuesday night after sunset.

It’s free to sit on the Grand Lawn and Ceperley Meadow. Just show up with your picnic blanket or lawn chair to enjoy this Stanley Park summer evening tradition!

Update: We did the Stanley Park Christmas Train last year and it was fantastic! You can read about it here. 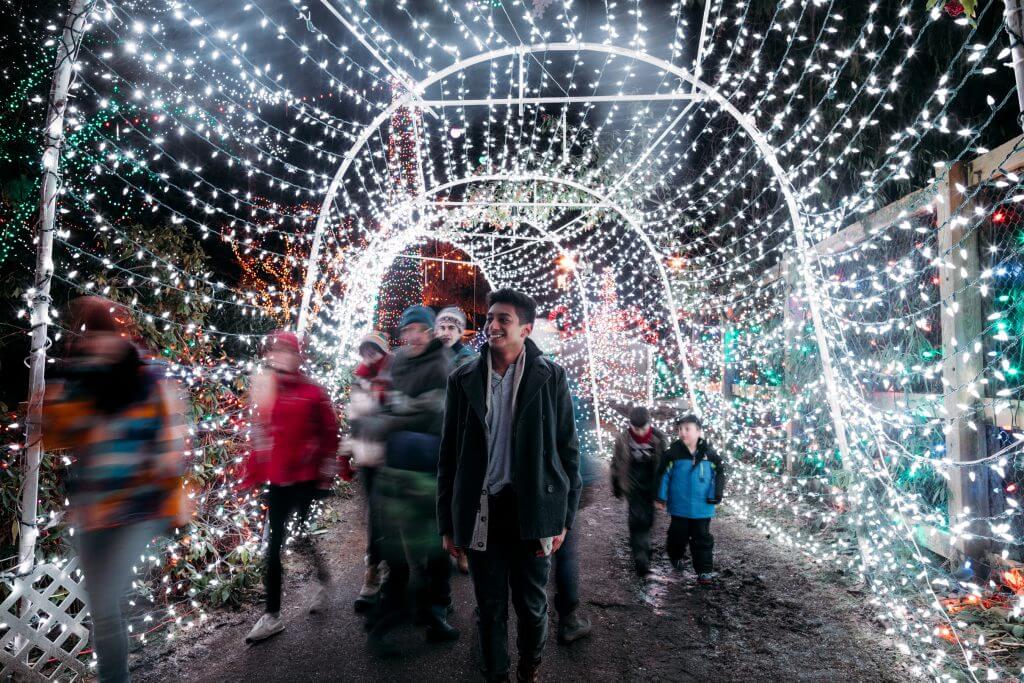 Ride the Bright Nights Train and experience the lights, breathtaking displays, and live performers along the train route. But, Bright Nights at Stanley Park is so much more than just a train ride.

You can also view the displays at the Train Plaza by donation ($5.00 suggested).

Wondering where to park at Stanley Park? There are a ton of pay parking lots. They have passes sold by the hour, day, season or year. If you are visiting from out of town, I recommend getting a day pass.

Since Stanley Park is so massive, it’s easier to drive and park rather than walk, especially with kids.

Looking for more things to do in Vancouver, BC? 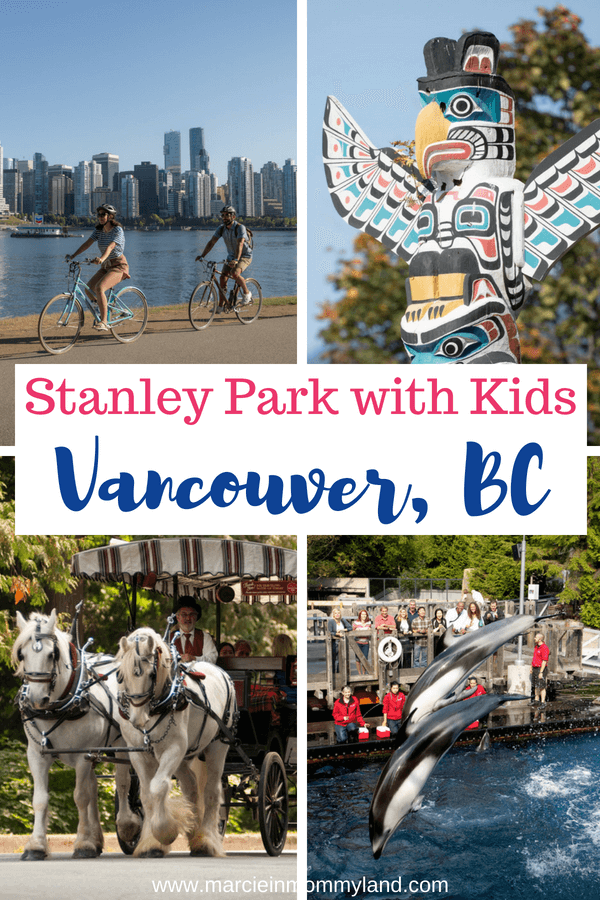 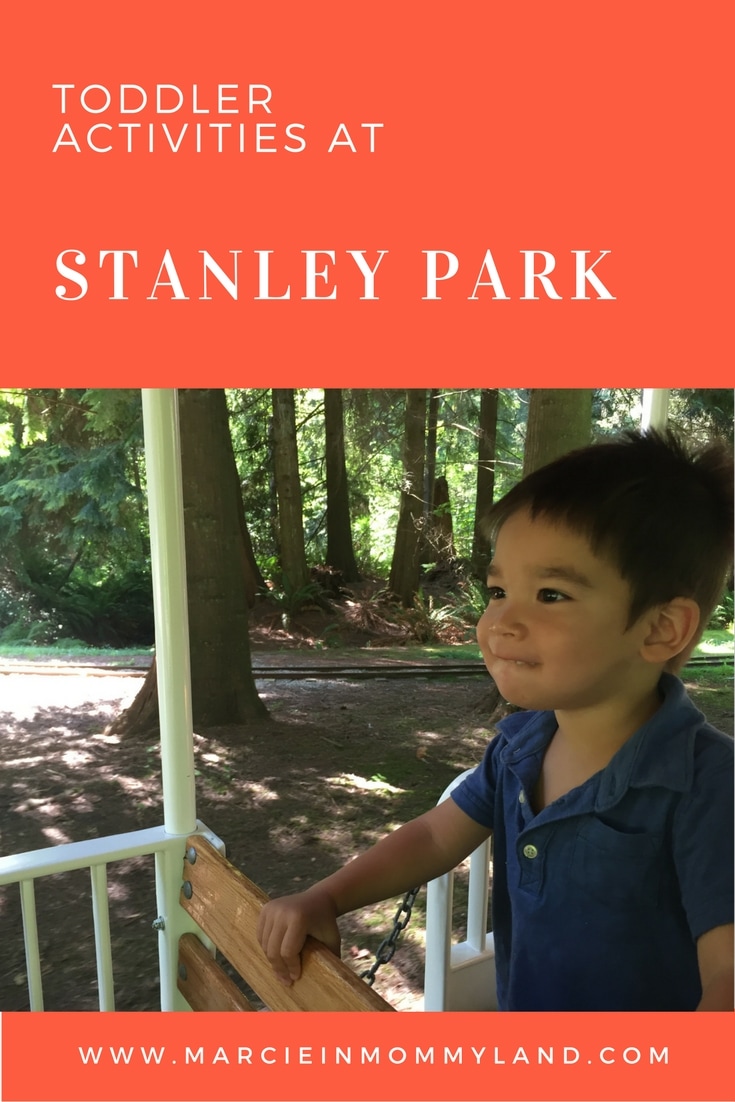 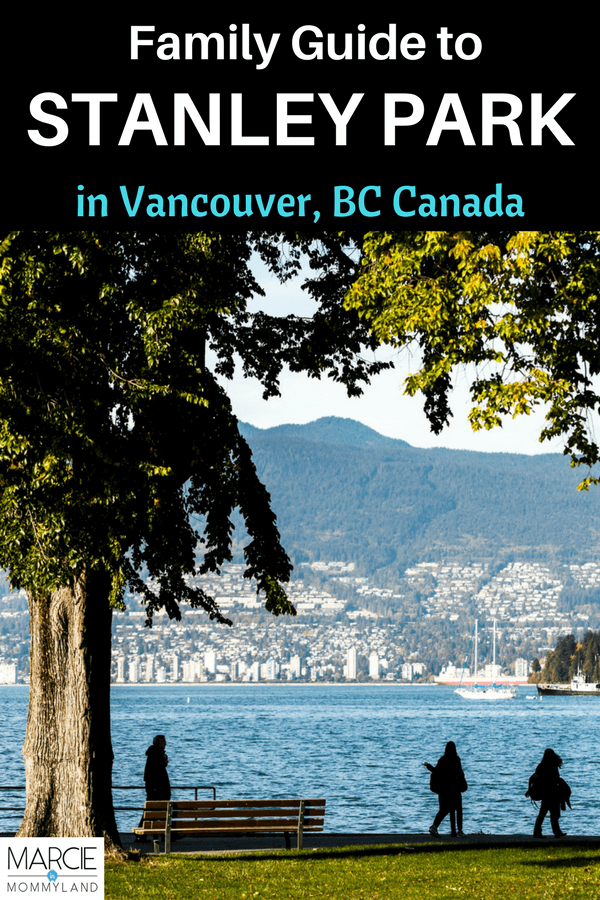 Ah, I love giant parks with tons to do in them! The aquarium looks beautiful--reputable aquariums are so much fun to visit. I'd love to rent a bike and explore, too. Looks like you guys were there on a beautiful day!

Yes, July is a gorgeous time to visit Vancouver, BC!

Am I the only one that forgot about Vancouver?! Great that you're sharing this with people as a reminder.

I know, right? It's such a big city, but so underrated!

It looks like the perfect itinerary for both kids and adults. Horse-drawn carriages and spray parks. Woohoo. LOL. It looks like you guys had an amazing day and what a beautiful aquarium. I really must get up to Vancouver.

Yes, get up there!

It’s so cool that you can drive to Canada -and Vancouver looks like the perfect family-friendly destination. The horse-drawn tour looks amazing. My kids would love it and so would I. We’d love to do the sea to sky gondola, the train and the hop-on hop-off bus too.

Canada is a beautiful country so many places to explore is just like this park. I have been to Toronto and every visit we always have a blast.

Oh fun! I'm heading to Quebec for the first time with a quick stopover in Toronto!