Inspired by our recent trip to the Maui Ocean Center, we thought we’d arrange a play date at the Seattle Aquarium on the beautiful Seattle Waterfront.

Currently, there is a lot of construction going on to build the Sea Wall, so we left our house extra early to make sure we’d have no problem with traffic and parking.

We got there at 9:45am and there was plenty of street parking (yay!) and the road construction was actually an attraction for toddlers in itself with the big machines! 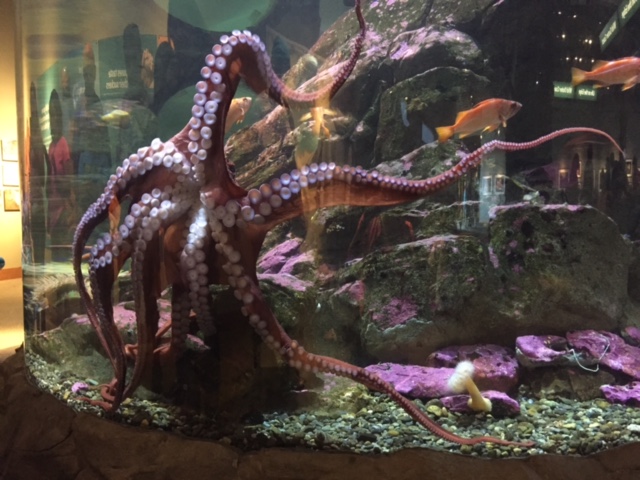 The Giant Pacific Octopus was quite the show stopper!

We met up with our good friend and her son to explore the Seattle Aquarium together. As soon as we passed the admission desk, the first exhibit is the Window on Washington Waters, which features a large fish tank where they were offering a diving presentation. Owen is still scared of divers, so we had to quickly move past that area, but it looked great for kids who aren’t scared! There are benches and plenty of room for strollers in that exhibit area.

The next area, Life of a Drifter, featured a giant Pacific octopus (which was amazing to see and there were lots of little kids excitedly pointing at it! Owen didn’t want to get too close, but he enjoyed sitting on my lap to observe it. There is also a glass Ring of Life tank of jellyfish (which people were practically lined up to take photos inside.) 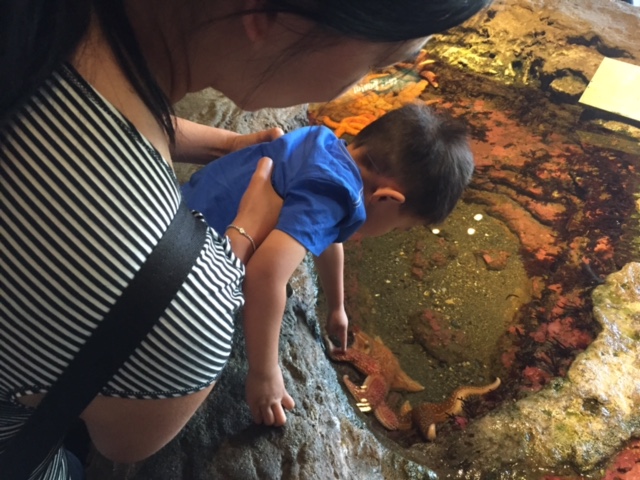 Life on the Edge features hands-on exhibits where children can touch sea life
Next to that was Life on the Edge, which featured  their hands-on area. My friend’s toddler was thrilled to be able to touch a star fish. Owen was excited to just touch the water and didn’t really want to touch any of the animals. I’m glad he let me know he wasn’t interested so we moved through that area. 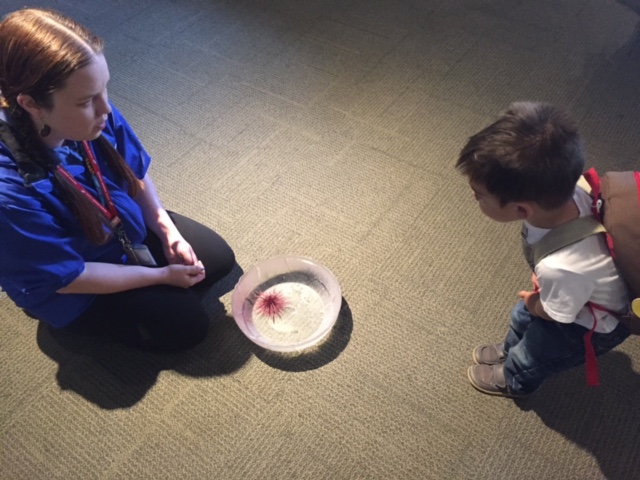 A Seattle Aquarium volunteer tells Owen all about sea urchins
I was really impressed with how many volunteers were available at the Aquarium. They were ready to engage with visitors and tell them about specific animals. This volunteer offered Owen the opportunity to touch a sea urchin. He declined but was very happy hearing about them and looking. 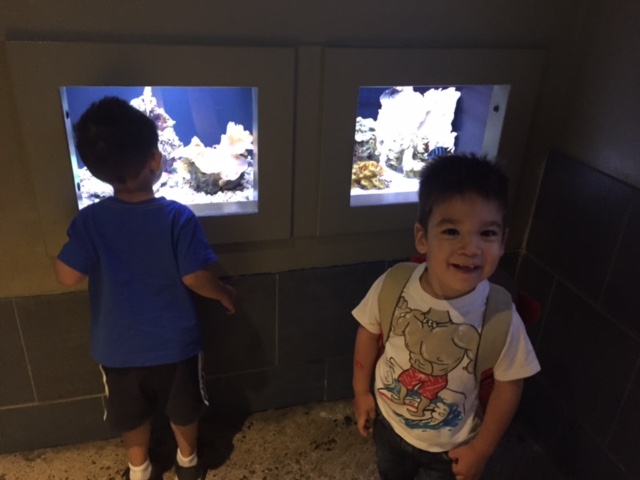 Owen and his friend are so excited that these fish tanks are right at their height!

However, it’s perfect placement that the bathrooms are located immediately after the hands on area. There’s a drinking fountain and inside the bathroom they have a step stool by the sink. And there’s a baby changing station. Just outside the bathroom area is a resting spot with felt boards.

Owen had such a good time watching Finding Dory in the movie theater a few weeks ago and he told me he wanted to “Find Dory! Find Nemo!” as we looked at the exhibits. Thankfully, we were able to find lots of “Dorys” and “Nemos” while exploring.

One thing my friend and I noticed is that it’s kind of difficult for toddlers to see most of the exhibits, unless they are being picked up.  It would be nice if there were steps so they could stand and look at the tanks. Being 6 months pregnant, I was only able to hold my toddler a few times to see fish. The same goes for it your child is in a stroller. There are a few exhibit areas that are dead ends, so maneuvering a stroller is tricky. I’d recommend wearing babies and small toddlers so they can experience a bit more. 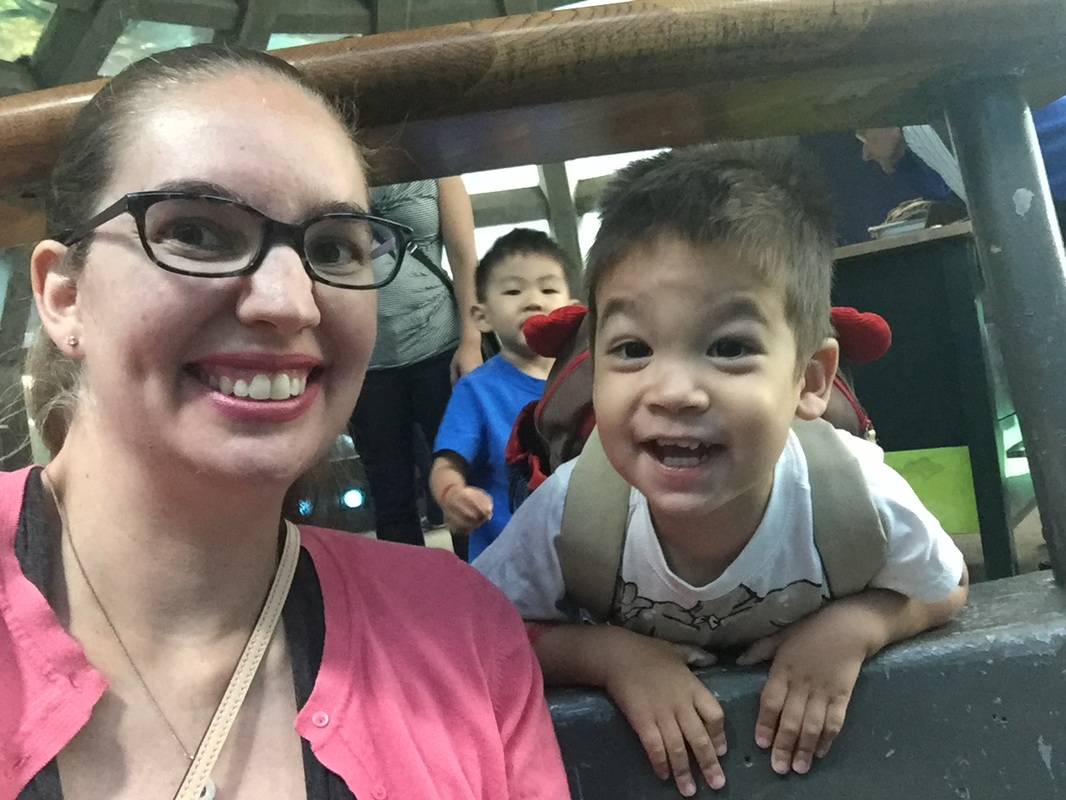 Being silly in the Underwater Dome at the Aquarium
The boys really enjoyed the Underwater Dome and I enjoyed that there was plenty of bench seating! It was nice for us to sit down and observe the sharks, salmon and other Puget Sound fish. Kids can also walk right up to the glass for a better look, which is great. There are two sides with seating so it’s fun to go back and forth and see what you can see. 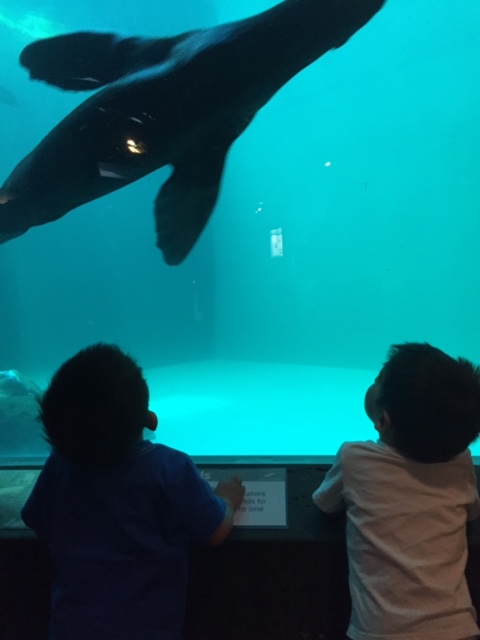 The boys were in awe of the Seals! 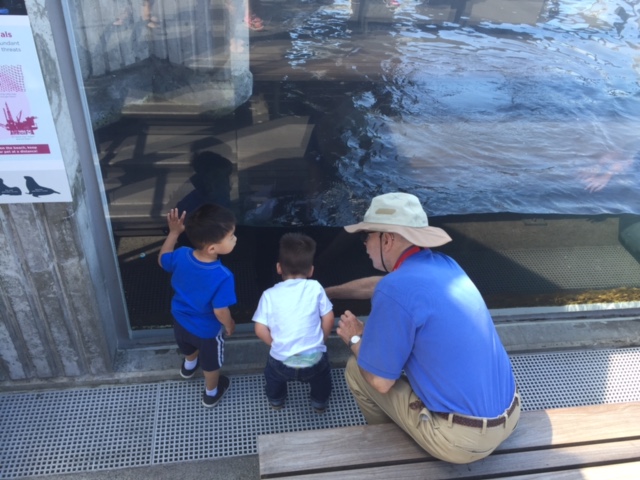 The highlight for the boys was definitely seeing the Seals! We got to watch them swim underwater while we were inside (this was a great height for small kids) and then we headed up the ramp to see them outside. Note: you cannot eat outside at this exhibit. There was a Seattle Aquarium volunteer who took the boys to the front of the display and talked to them about the Seals, told them their names, and pointed them out when they swam by. They were in complete awe!

We ended our trip with a visit to the Sea Otters, which was another highlight! It was trickier, because I had to hold Owen up and kind of squeeze through visitors in front of us so he could see them. Again, it would be nice if there was a step there not only so kids could see but so that adults would leave a little room for smaller people to have a chance to enjoy the exhibit, as well.

We really enjoyed our time at the Seattle Aquarium! It’s not too big or too small and it provides at least two hours of exploring time. On a sunny day, you could easily hang out upstairs watching seals in the exhibit and looking at the ferries in the Sound. They also offer story times, Toddler Tuesdays and other events and activities throughout the year.

Temporary sign outside the Aquarium to alert visitors where to go

Plan Your Visit to Seattle Aquarium

The Seattle Aquarium is open daily from 9:30am-5pm (with extended summer hours until 6pm) and is  located at 1483 Alaskan Way, Pier 59, Seattle, WA 98101-2015. The Elliott Bay Seawall Construction is going on, but The Aquarium is open as usual. Driving routes to get there remain the same. There’s plenty of parking at Republic Parking’s Hillclimb Court and the Pike Place Market Garage.The Seattle Aquarium is located on the iconic Seattle Waterfront and is a must-do for locals and tourists alike. If you go in the summer, there are many walk up counters serving fresh fish and chips, shellfish and yummy treats like ice cream and caramel corn. The Seattle Aquarium also has a cafe upstairs or you can bring a sack lunch and eat it outside. 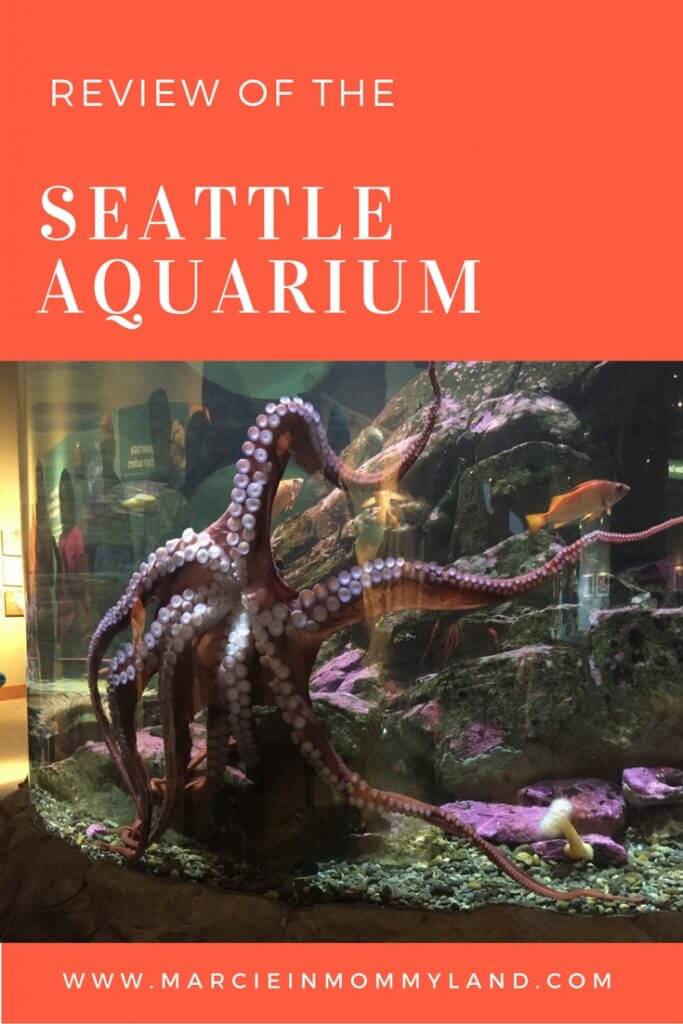