Home » Pacific Northwest » Royal BC Museum in Victoria, BC

As soon as I told my friends that my husband and I were spending our Babymoon in Victoria, one of their first suggestions was to check out the Royal BC Museum. I hadn’t really heard of it before, so I went online to take a closer look. I saw that they had a Mammoth exhibit going on while we’d be there, which was motivation enough to visit. When I saw that it was located across the street from our hotel, it felt like a sign that we must make the visit happen.

The Royal BC Museum Corporation is one of Canada’s greatest cultural treasures. The museum was founded in 1886; the Archives, in 1894. In 2003, these two organizations joined to become British Columbia’s combined provincial museum and archives, collecting artifacts, documents and specimens of British Columbia’s natural and human history, safeguarding them for the future, and sharing them with the world.

The Museum has two exhibit floors. One focuses on Natural History (plants and animals) and another floor focuses on Human History (First Nations and early BC settlers.) The special exhibit is called Mammoths! Giants of the Ice Age and features a life-size Mammoth on display. Though we were disappointed that there was only one mammoth (rather than the plural in the exhibit title) we were really impressed with the quality of the display, which featured an entire landscape. This exhibit is in partnership with the Field Museum in Chicago. What’s really cool is that the Royal BC Museum also localized it with their own dramatic update to their Natural History gallery featuring BC’s own Ice Age.

We also explored the rest of the Natural History floor and enjoyed seeing BC animals. 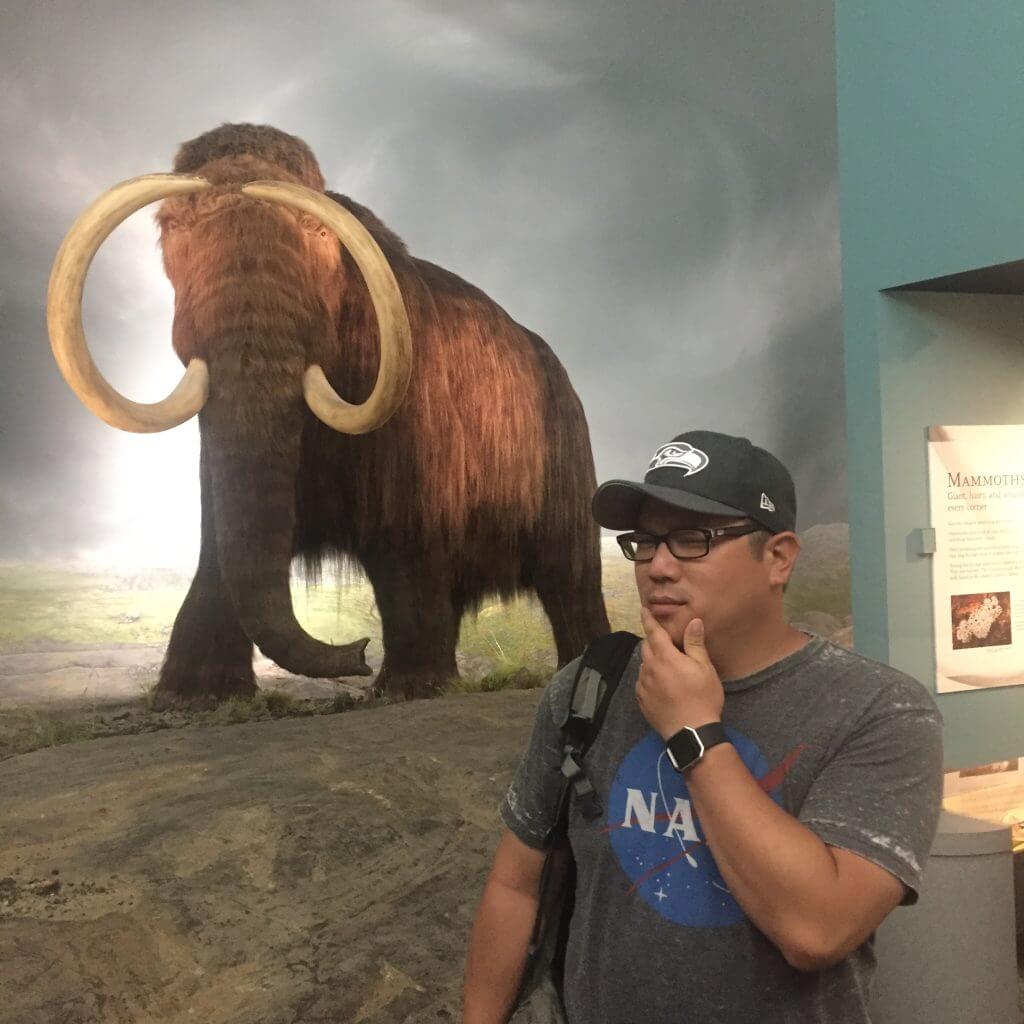 Darren deep in thought upon seeing his first Mammoth at the Royal BC Museum in Victoria.

Moving upstairs, we discovered the Human History floor. I really appreciated how well thought-out the First Peoples exhibit was. We ended up entering at the exhibit exit and didn’t realize our mistake until we were halfway through. The Jonathan Hunt House was especially impressive. The house is both a museum installation and a real ceremonial house. In the potlatch system, the Chief formally presents, to an invited audience, crest images, songs, names, and other prerogatives to which he claims inherited rights. The audience’s recognition of the Chief’s claim is its legal validation. When I was in fourth grade, my school had a Potlatch and I was struck how similar the set-up was. Even though I hadn’t thought about it for many years, I instantly knew it must be used for Potlatches.

There is also an extensive Modern History exhibit that featured the HMS Discovery (where we were able to walk aboard and see some of the rooms) as well as BC’s history of mining. We were really intrigued by the detailed exhibits that showed what it was like to work in a mining cave and we were surprised how we could be standing, looking at the exhibit and still feel like we were underground in the claustrophobic mine. The rest of the Modern History area reminded me a lot of the Museum of History and Industry in Seattle, which is a really good thing. 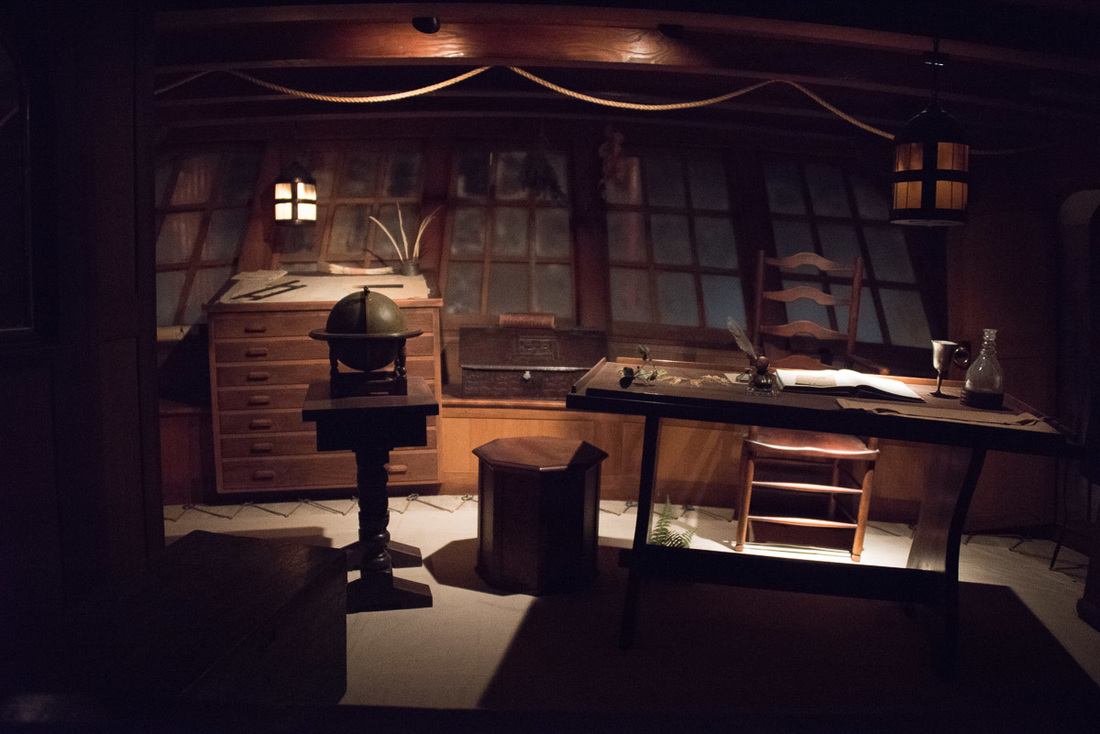 My husband and I tend to do museums quickly, but it felt like we were through exploring this museum quicker than usual. We looked at the map and double checked that we didn’t miss any exhibits. The building seems a lot larger and it felt like we must have missed a floor. We had not, unless you count the gift shops on the main floor.

Next time, we want to enjoy an IMAX film. I was impressed with their selection and thought most of them would be appropriate for children of all ages. We were really bummed that none of the times worked with our schedule. We will be adding that to our list for next time. I think we’ll wait to bring our kiddos to the Museum until they are old enough to look without touching. Some of the exhibits had fun features at toddler-height with signs saying not to touch them. We also saw several kids running through the exhibits and just don’t want the added stress of making sure they don’t interfere. However, when they are older, we will be bringing them here!

To find out more about activities in Victoria, BC: 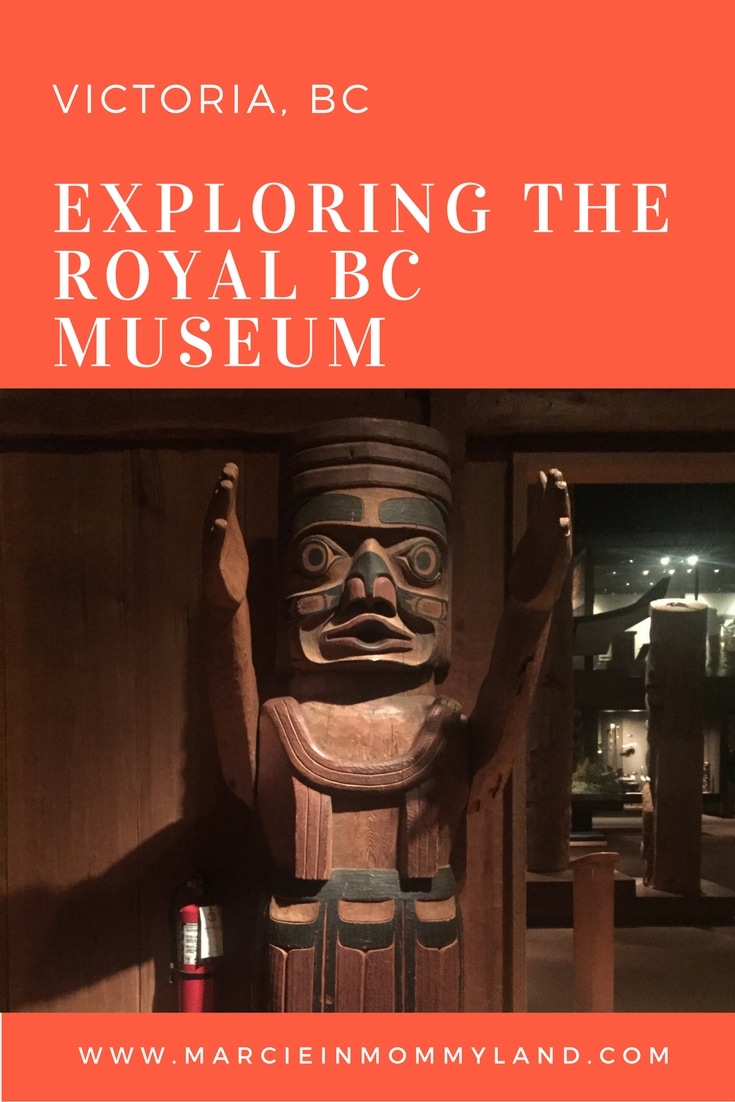