When we saw that Victoria, BC offered a tour of a castle, we figured we should probably check it out. Thankfully, it was a stop on our Victoria Sightseeing Tour. The road to get up to Craigdarroch Castle is narrow, so our tour bus dropped us at the bottom of the hill and was walked up. This was cool because we really got that “Oh Wow” moment when the castle appear around the corner.

As soon as we entered, we were instructed to clean our shoes using a machine that brushes off dirt from the soles of shoes. I’ve never seen anything like that before but it sure beats wearing those booties over shoes! I appreciated that they asked us to do that. It means they have a lot of pride in the Castle and they are serious about preservation.

Once we entered, we were able to explore just about all the rooms. Built by coal baron Robert Dunsmuir during the reign of Queen Victoria and now a National Historic Site, Craigdarroch Castle has been meticulously restored, giving visitors a glimpse of privileged life in the 1890s. As we walked around, it reminded me so much of Iolani Palace in Hawaii. Both homes had possessions sold and distributed long ago and volunteers are now painstakingly trying to locate items found in old photos. Many people in Victoria probably have something that belonged to the Castle and have no idea. Craigdarroch Castle also reminded me a lot of Downton Abbey. How could it not? 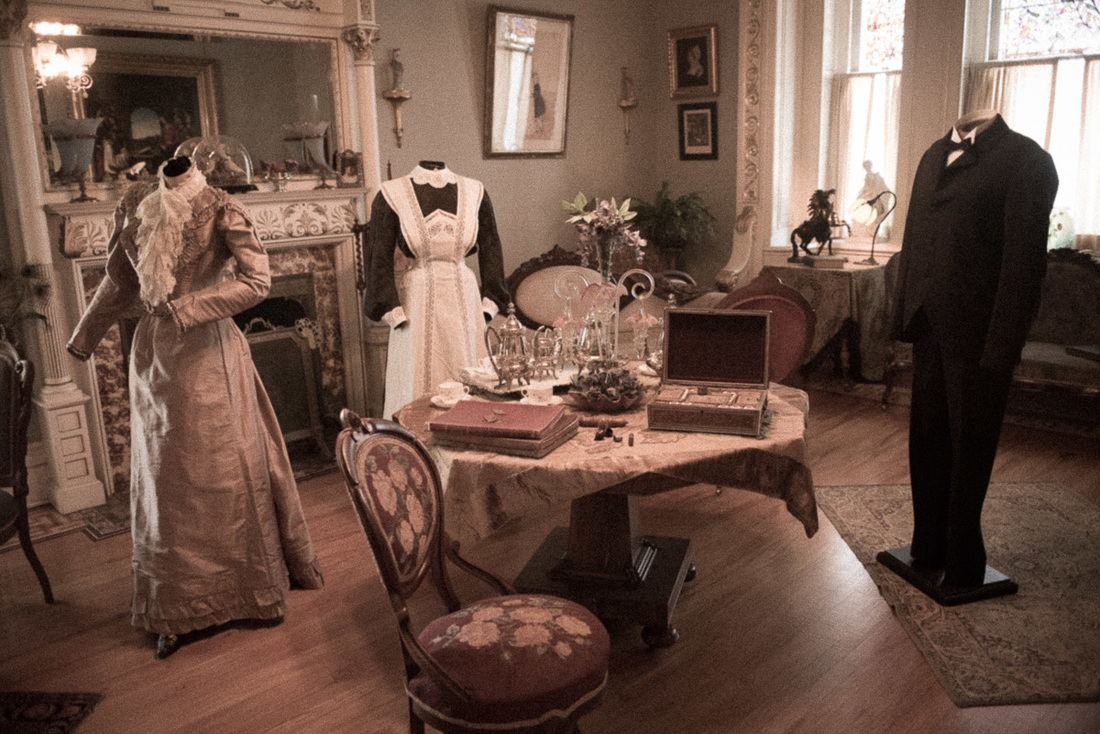 The house itself is stunning. Apparently, they had to scrape off several layers of wall paper off the ceiling to reveal the original. The wall pieces were all shipped in from Chicago and were of a quality that you just can’t find any more. I appreciated all the stained glass, especially on the top floor where there is an observation room with views of Victoria.

The people of Craigdarroch Castle have done a marvelous job of posting information about the home and the Dunsmuir Family, who built it. These signs really brought each and every room to life. Robert and Joan Dunsmuir had two sons and eight daughters plus one child who died in infancy. Robert Dunsmuir gave the orders to start building Craigdarroch in 1887. There were still three Dunsmuir daughters who were not married and the mansion would be the perfect venue to launch them into married life. Unfortunately, he died in April 1889 before the house was completed. After Robert’s death, Joan spent some time traveling in Europe. Her sons oversaw the completion of the construction while she was in Europe and Joan, with her three unmarried daughters and two orphaned grandchildren, took up residence in 1890. There was a lot of family drama until Joan’s death in 1908.

My favorite things to look at were the authentic clothing on display. Even though I watch a lot of period pieces in movies and television, it’s so remarkable to see them so close where you can really take not of the detail. It was easy to see how someone would need assistance to properly get dressed. 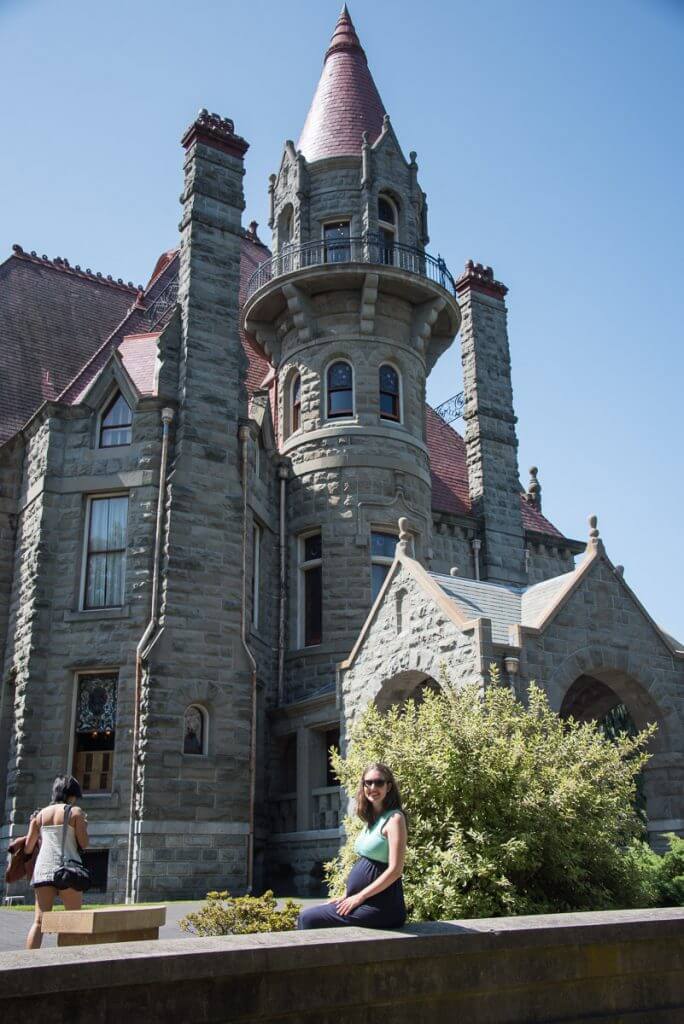 Craigdarroch Castle is nestled in a neighborhood up a small street.

Craigdarroch Castle is a great stop for people who are interested in historical homes, great architecture or who love a juicy story! Additionally, they have several volunteers stationed throughout the Castle who are extremely knowledgable about the Dunsmuir family and the restoration progress. It’s easy to get to Craigdarroch Castle by tour bus or taxi from Downtown Victoria. Depending on crowds, you may want to allow yourself more than the 40 minute tour bus stop.

What else is there to do in Victoria, BC? 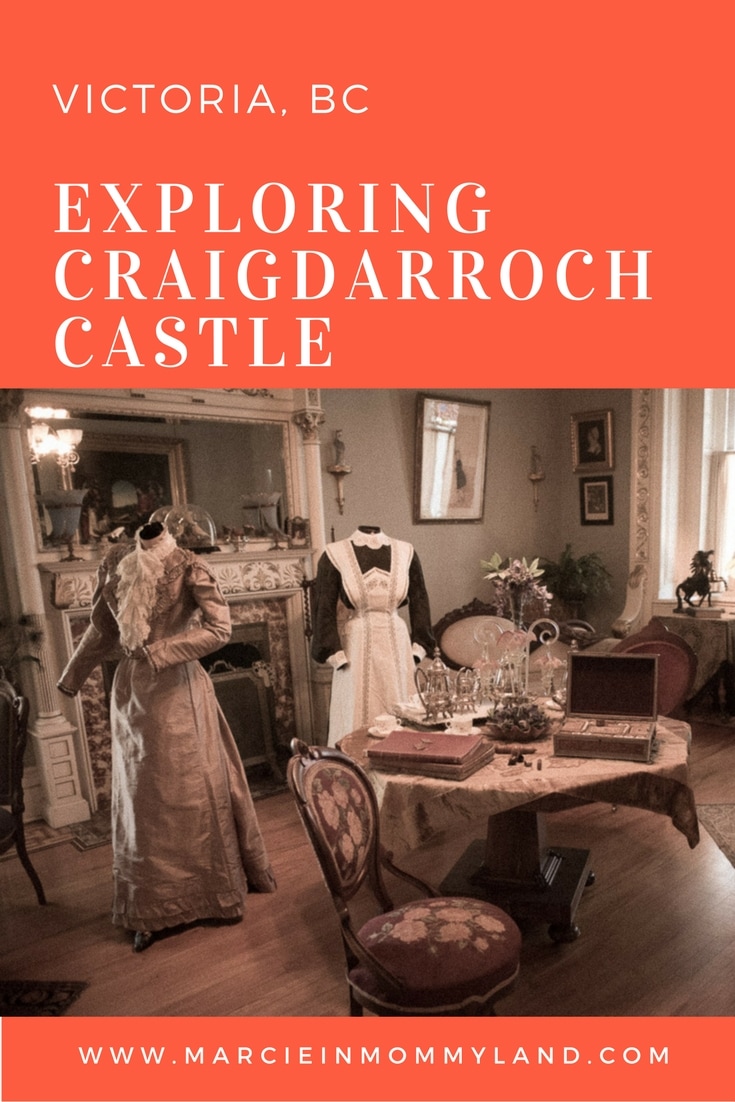