Home » Destinations » Is the Disney Aulani Character Breakfast on Oahu Worth the Price?

Are you planning a trip to Disney Aulani on Oahu, Hawaii? Keep scrolling to find out everything you need to know about their Aulani character breakfast price, menu, how to make a reservation, and more!

This post about the Disney Aulani character breakfast may contain affiliate links, which means if you click on the link and purchase the item, I will receive an affiliate commission at no extra cost to you. All opinions remain my own.

Aulani, a Disney Resort & Spa is one of the premier Disney vacation destinations. It’s the only Disney resort in Hawaii. Not only is it an incredible resort, but it’s home to the Disney Aulani Character Breakfast.

This Aulani breakfast buffet is casual, family-friendly and open to guests and non-guests of Aulani Resort in Ko Olina, Oahu. Find out how you can maximize 2 nights at Disney Aulani.

Check here for the best deals at Aulani, a Disney Resort & Spa

Aunty’s Breakfast Celebration at Makahiki is located on the first floor of the main building at Aulani, a Disney Resort & Spa. It has seating indoors and outdoors.

The lanai overlooks a shimmering koi pond beside the Waikolohe Valley pool area.

Makahiki gets its name from the traditional Hawaiian celebration of the harvest. If you look around this Aulani restaurant, you’ll see glass designs and murals that depict the Hawaiian Makahiki season.

Give the card to the Aulani PhotoPass photographer. Once your photos are complete, you’ll give the card back to the host and you’ll be seated for breakfast.

The photos will be added to your PhotoPass account, which you can purchase at the end of your stay. Find out my tips for making the most of your Aulani Resort PhotoPass.

We arrived right as Mickey needed to “step away to eat an omelet.” So, we were first in line for when he return just a few minutes later (he must eat quickly!)

He immediately greeted my preschooler and walked him over to the photo area.

I was so impressed with how friendly the Disney cast member and PhotoPass photographer were as they took photos with their camera, my phone and my Mom’s phone.

And no matter how often we meet Mickey Mouse, it’s ALWAYS a special experience!

Plus, he’s decked out in his Aloha shirt!

My family and I couldn’t get over how EXTENSIVE this Aulani breakfast buffet is.

I mean, they had scrambled eggs, hash browns, yogurt, fruit, biscuits and gravy, Eggs Benedict, custom omelets, grits, lots of pastries, muffins and the list goes on and on.

Plus, they had Disney’s signature Mickey waffles!

They Makahiki menu also had an array of Asian food, which I thought was cool. My kids are always down for Chinese food, so they gobbled up the yummy fried rice.

I also saw Chinese congee, which is a common breakfast item. Congee is a rice porridge that’s easy for babies and toddlers to eat.

There is more food here than you’ll know what to do with. It’s the type of place where you can fill your bellies at breakfast and won’t be hungry until dinner. You can also order as much fruit juice as you’d like.

If there’s one star of the Aulani Character Breakfast, it’s Aunty herself! When we arrived, she was leading the kids in a parade around the restaurant while singing.

My 4 year old jumped right in the parade and off he went! He came back a few minutes later beaming from ear to ear.

Later, kids were invited to grab coconuts and tap along to Aunty’s singing. Minnie Mouse also joined in on the fun as the kids learned how to hula dance. And there was another parade featuring fish puppets.

Aunty also walked around the restaurant singing and playing her ukulele, serenading families.

As a parent of little kids, I was so relieved to have such interactive entertainment during breakfast. That allowed me to actually eat my food and feed my 17 month old. Plus, it kept my 4 year old engaged and occupied.

The entertainment seemed to reset about 90 minutes later.

During our Aulani breakfast in February, we saw Minnie Mouse and Pluto. They came past our table a couple of times.

Aulani Insider Tip: Ask to sit outdoors for better lighting for your photos.

It wasn’t sold out when we were there in February, so the characters had a bit more time to play with our kids. And they posed for lots of photos and videos for us.

We saw characters do individual photos with guests as well as big group shots. Sometimes there was a Disney cast member with them to take photos, but most of the time it was up to guests.

What to Wear to the Aulani Character Breakfast

I’m a very thematic person. When we are in Hawaii, I like to wear tropical prints and dress the boys in Aloha shirts. I especially wanted to dress up because I knew we’d be getting a photo with Mickey Mouse in his Aloha shirt.

While it’s not a requirement, it makes it a bit more fun.

Aulani Insider Tip: For a more festive look, wear your leis that you receive at check in.

Like most Disney restaurants, there is a dress code. You must wear shoes and shirts at all times. If you wear a swimsuit, you also need to wear a cover-up. Kids under 14 years old can wear a costume, adults cannot.

Oh, and no formal attire (like tuxedos and wedding gowns!)

I looked around while we were there and most guests were wearing Aloha shirts, flowy dresses, collared shirts, and resort wear. The kids were mostly also in “nice” clothes. I also saw a few Minnie ears, which was festive!

Aulani dining reservations are a must, especially during school breaks when the resort is packed.

If you’re staying at Aulani, a Disney Resort & Spa, know there are several breakfast options besides the Aulani character dining.

If you are looking for a fabulous breakfast on the beach, Ama’Ama is for you. It’s not cheap. A whole payaya is $11 and a breakfast sandwich is $23. But, if you want a memorable Hawaiian breakfast with a gorgeous view, it’s hard to beat.

And if you just want a latte, Wailana Coffee Bar is the place to go. You can also walk across the street to Island Country Market to pick up groceries. Or, pick up fresh malasadas from Leonard’s Bakery before heading to Aulani.

Why My Family Loves Vacationing at Aulani with Little Kids

Usually when I plan a Hawaiian vacation with kids, I tend to over-schedule us. The kids spend a lot of time in our rental car and we zip all over the island.

While that’s great for exploring, it’s not exactly relaxing.

When we visit Aulani, a Disney Resort & Spa, I know our family will be able to slow down and just enjoy our time together. And so can your family!

WHAT CHARACTERS ARE AT AULANI?

IS THERE AN AULANI DINING PLAN?

No, Aulani does not have a dining plan. It’s also not an all-inclusive resort, so you’ll need to pay for each of your meals there.

CAN YOU GO TO AULANI FOR THE DAY?

If you are not staying on-property, you will not be able to use the Aulani pools, join the activities, or take photos with characters. These activities require wristbands, which are given to guests.

However, you can make reservations for their restaurants or use the beach in front of the resort. And you can simply walk around the resort!

HOW MUCH DOES THE AULANI CHARACTER BREAKFAST COST?

Like with all Disney character dining, character appearances, entertainment, menu items and pricing and subject to change at this Aulani buffet.

And if you’d like to purchase the Breakfast photo package, it’s an additional $35. Or, you can go to Kalepa’s store to get them added to your Aulani PhotoPass account.

So, is the Aulani Character Breakfast Buffet Worth the Price?

My answer is an emphatic YES.

If you are staying at Aulani, a Disney Resort & Spa you should definitely plan on doing Aunty’s Breakfast Celebration at Makahiki. It’s a great way to meet Disney characters without waiting in line. The food is really tasty (and plentiful!)

But the main reason the Aulani Character Breakfast is worth the price is for Aunty’s entertainment. Your kids will be enamored with her the entire time.

It’s the perfect way to kick off a family vacation at Aulani Resort.

And, if you are staying elsewhere on Oahu, I’d still recommend making a reservation for Aunty’s Breakfast Celebration at Makahiki. You’ll feel like you are at Disneyland. There’s nothing that quite matches that Disney magic!

You will enjoy complimentary parking (either self-parking or valet) for up to 4 hours when you spend $35 or more at Makahiki. Just remember to bring your parking ticket and purchase receipt with you. 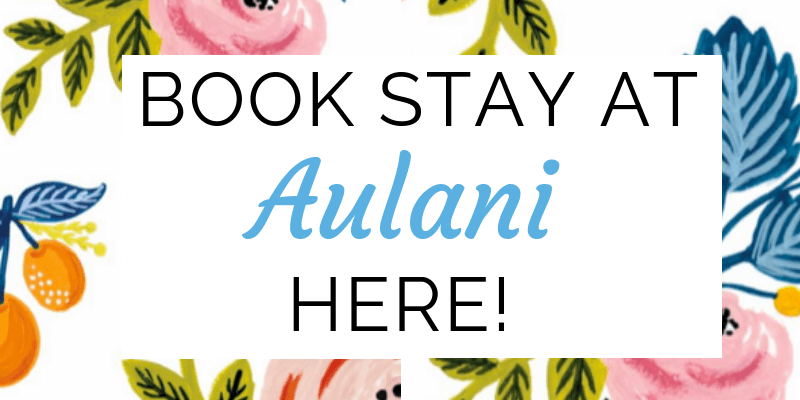 Fun Things to Do on Oahu with Kids

I love the combination of Disney theme with Hawaii clothes - you all look amazing! So cool to see Mickey Mouse escorting your kid for a photograph, he must've been thrilled! I had no idea Oahu had a character breakfast and I am sure it would've been one amazing experience, especially for the children!

Oh thank you so much! Yes, a lot of people don't realize there's a Disney resort in Hawaii!

I have never stayed in any of the Disney hotels yet... I like the way the restaurant have created the atmosphere.. I so wanna go and get that Mickey waffle right now. ☺?

This is the Disney resort in Hawaii and it's fabulous!

I would love to have Disney themed breakfast buffet with so many varieties. I am a Disney fan since childhood, and so this place looks fun for me. Having photo with Mickey before getting seated for breakfast is great. I loved the Mickey shaped waffles and it is very good that they have Asian style of breakfast. I would love to opt for Asian breakfast.

They have a huge assortment of Asian items in the buffet!

How exciting! It’s a pricey but when you’re in Hawaii AND Disney, then it’s well worth it! The views are gorgeous and the smile on your little one is indeed priceless! ?

Looks like a great place to take kids. We've been talking about it as an option for when our kids get older!