I saw my first Eric Carle book when I was in kindergarten. It was Brown Bear, Brown Bear, What Do You See? and our class did an art project where we each created a page in the book.

It’s my most memorable art project from elementary school and that book was definitely a favorite growing up.

So, I was really stoked that that story was one of several featured in this Seattle Children’s Theatre production of The Very Hungry Caterpillar Show!

About The Very Hungry Caterpillar Show

As you might guess, this show is based on author/illustrator Eric Carle’s beloved book, The Very Hungry Caterpillar, which is the story of a caterpillar trying to satisfy his insatiable appetite, on his journey to becoming a full-fledged butterfly. 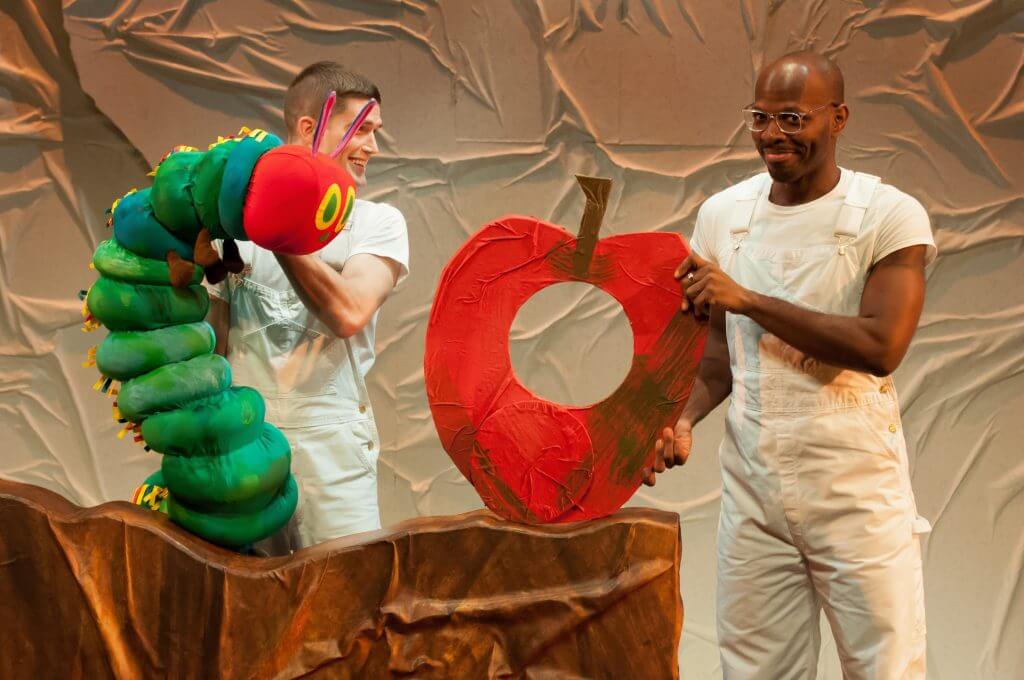 The Very Hungry Caterpillar Show is a bright, bold spectacle, featuring 75 lovable puppets who come to life with the help of the 4 member cast.

In addition to The Very Hungry Caterpillar, this production features the faithful adaption of three additional Eric Carle stories:

SCT’s Artistic Director, Courtney Sale, shared her enthusiasm for the first production of the season:

“Carle’s incredible commitment to high-quality artistry feels very close to our mission as theatre makers here at SCT. We profoundly believe children deserve excellent arts experiences that nourish their creativity and draw us all closer together.”

“Your favorite small person will be changed for the better.”

What My Toddler and Preschooler Thought

While we’ve taken our toddler to several productions at Seattle Children’s Theatre, this was the first one he was actively engaged with.

I know it says this show is geared for kids ages 3 and older, but I’d say if you have a younger child who has a good attention span, go for it!

My toddler’s eyes lit up when he saw the puppets! 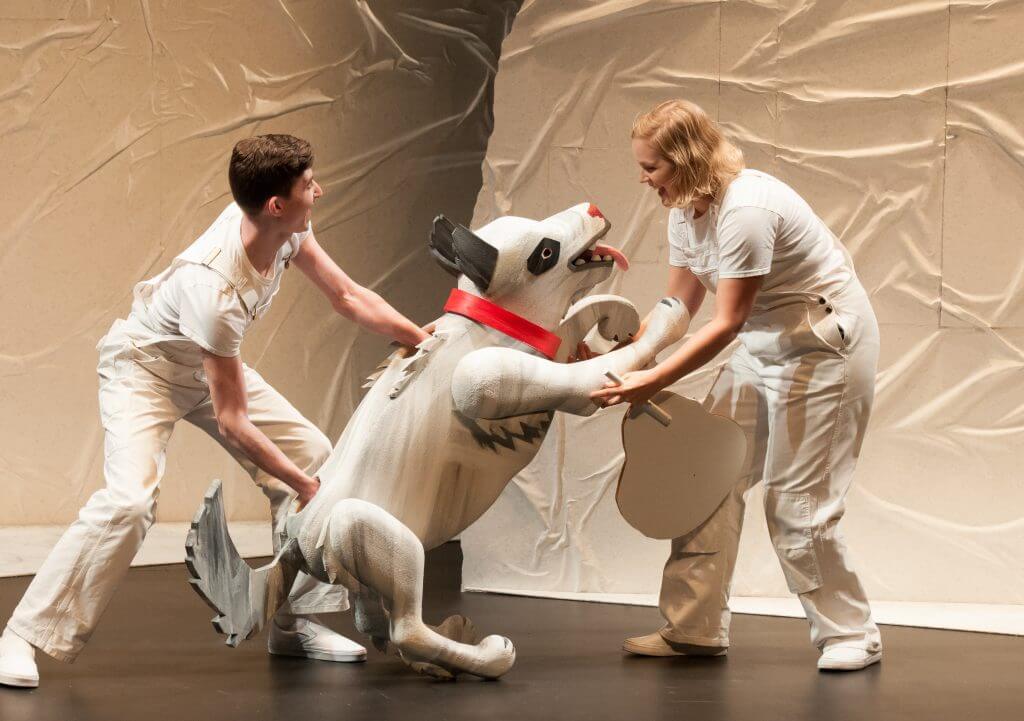 His favorite part was when the White Dog came out during the Brown Bear, Brown Bear What Do You See? segment. The actors made the dog seem so life-like with his mannerisms and all the tongue wagging!

He also joined in with the call and response segments. He’s not as familiar with the books as my oldest, so it was cool to see how quickly he picked up on the stories!

The plot of the Very Hungry Caterpillar really resonated with him as he immediately rifled through my bag asking to “eat, eat.” (Thank goodness they have a concession table!)

And he enthusiastically clapped at the end of the show! I have a feeling this is just the start of his love of the arts!

My preschooler has been to quite a few productions, so I knew he’d like this one.

He was familiar with a couple of the stories, so he joined in reciting some of the lines. But, the others were new to him and he was glued to the stage. 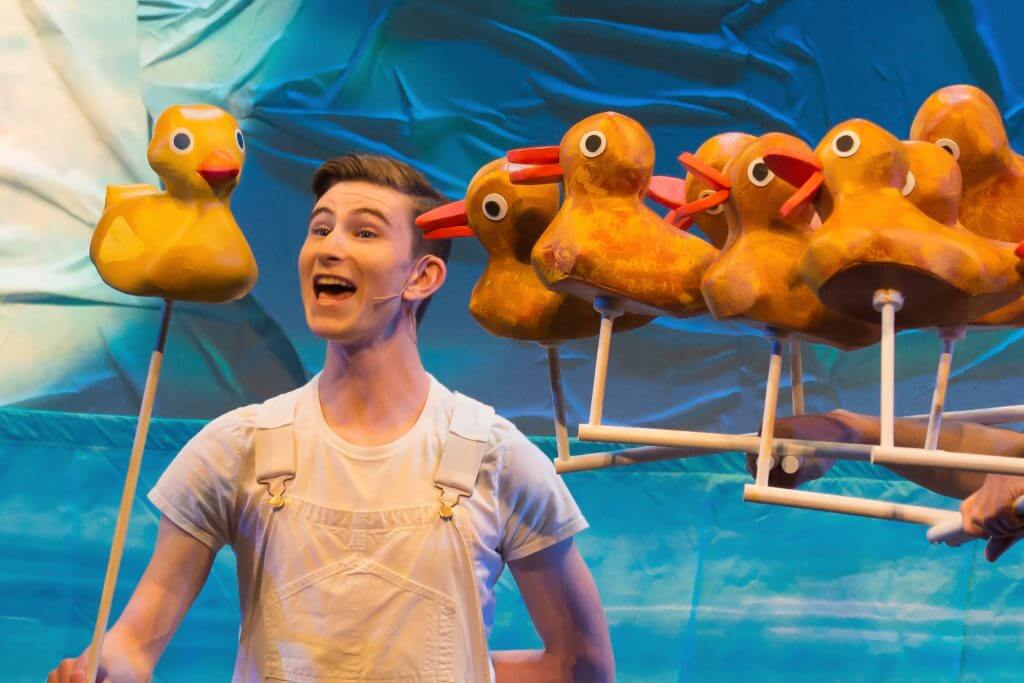 He was equally in awe of the amazing array of puppets as the rest of us! The actors did an awesome job making it seem like the rubber ducks were floating along.

The sweetest part of the show, for me, was when my preschooler was enjoying the show so much that he reached over and hugged is brother!

What I Thought of The Very Hungry Caterpillar

This is definitely one of my favorite children’s productions! It’s brightly colored and is just the right length for little ones. 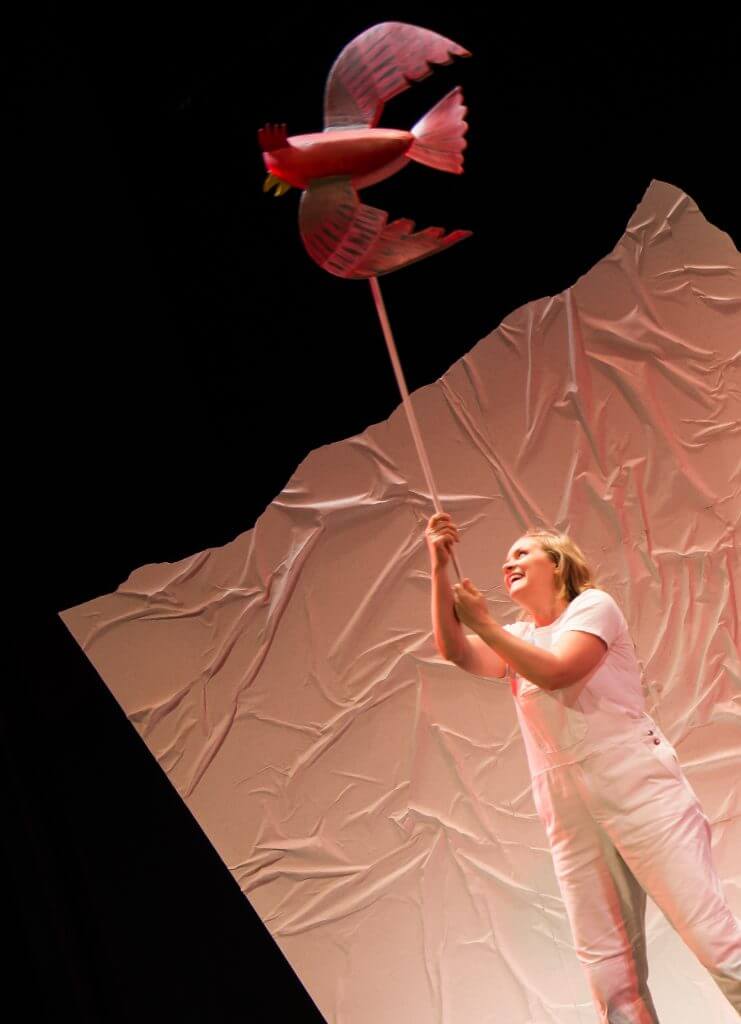 The puppets are incredible! The first one to grace the stage is Brown Bear and it takes two people to “walk” him across the stage. He’s quite large!

And there are puppets on sticks that fly and swim around the stage. My favorite were the fireflies who also lit up the stage!

I thought the show was designed very well. The music and sound effects really elevate the production.

Unlike most puppeteers who wear black to blend in, these actors/puppeteers wear bright white overalls so it’s clear what they are doing.

But, I think what stood out to me the most was that the theatre was PACKED.

Yes, we went on a Sunday morning, so I knew it would be busy. But, it was a sold out show! And that made me smile.

Here’s where I stand on my imaginary soapbox and quickly urge you expose your kids to the Arts. This show inspires kids to get excited about reading, think creatively, and appreciate live theatre.

The Very Hungry Caterpillar Show is a great first theatre experience for toddlers and preschoolers!

Ok, I totally geek out for photo ops and this show has so many! 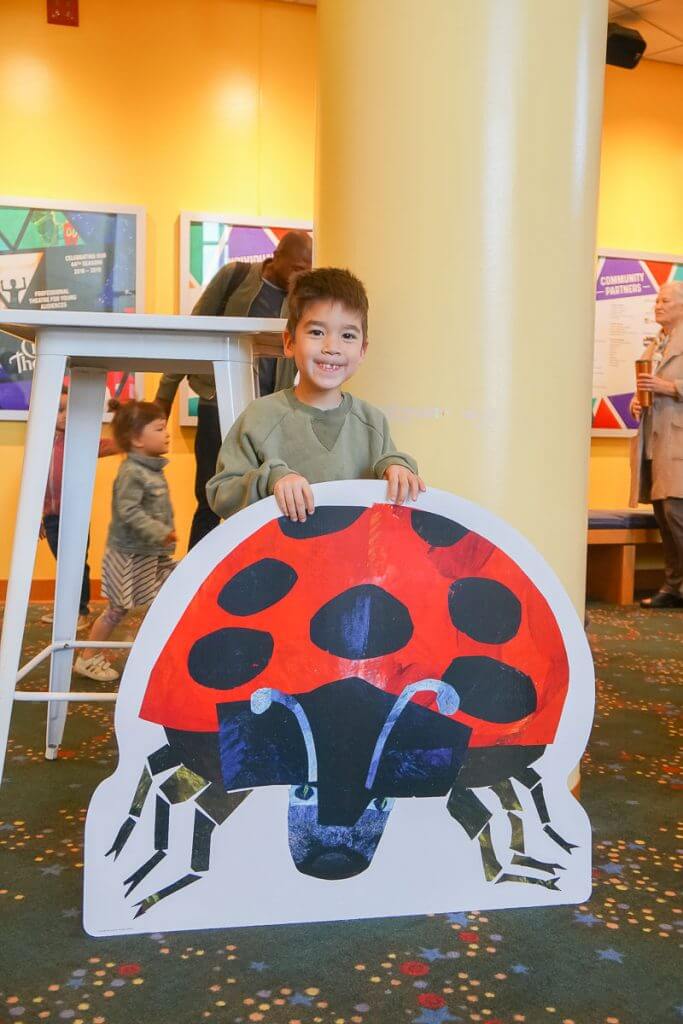 When I first walked in, I saw the cute animal cut outs and had to get some quick shots with my kids. 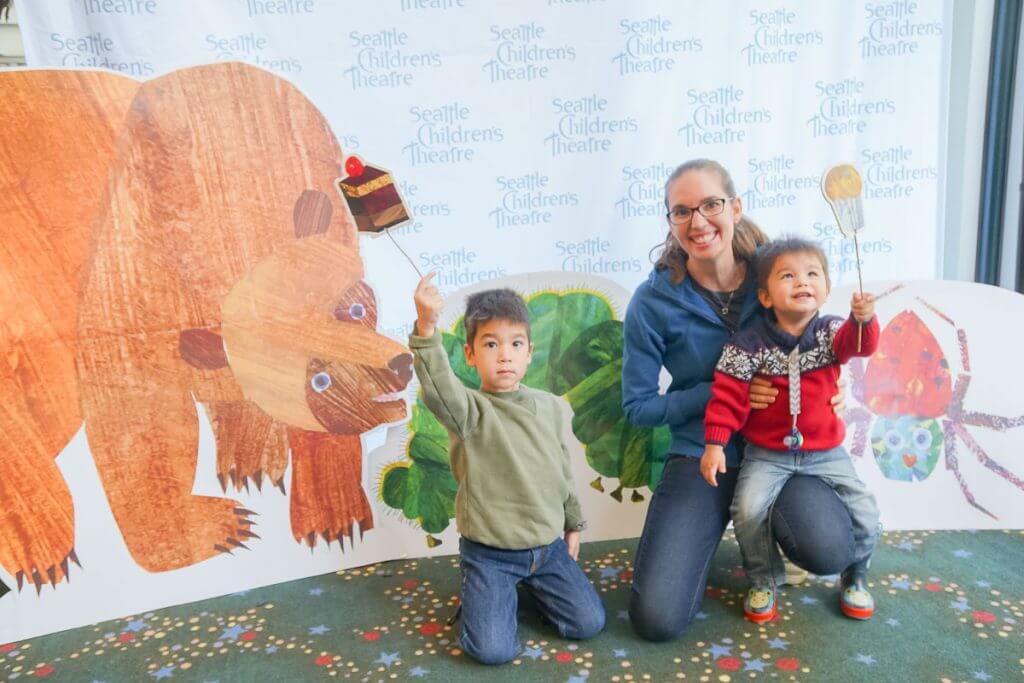 This photo backdrop and props were a lot of fun! Photo credit: Darren Cheung

But, then I realized there was a HUGE photo wall with tons of hand-held props! They had food, animals, and the Very Hungry Caterpillar himself! 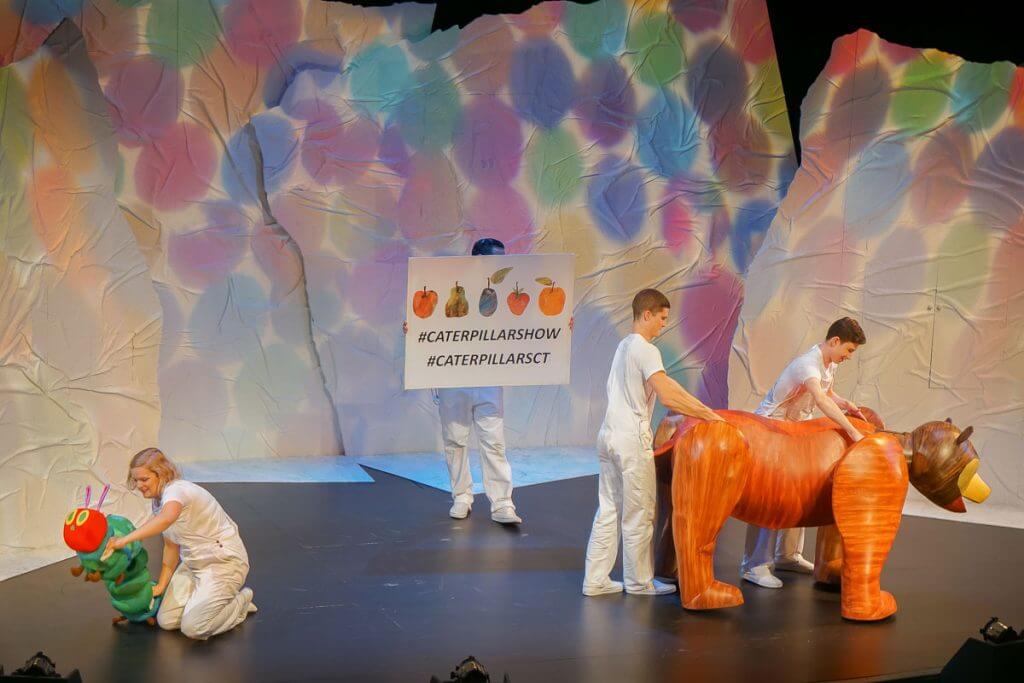 It was so cool to get to take photos of the puppets! Photo credit: Marcie Cheung

And at the end of the show, the cast came back on stage with a few puppets and encouraged families to take photos!

You know I love the gift shop at Seattle Children’s Theatre! The Eric Carle selection did not disappoint. 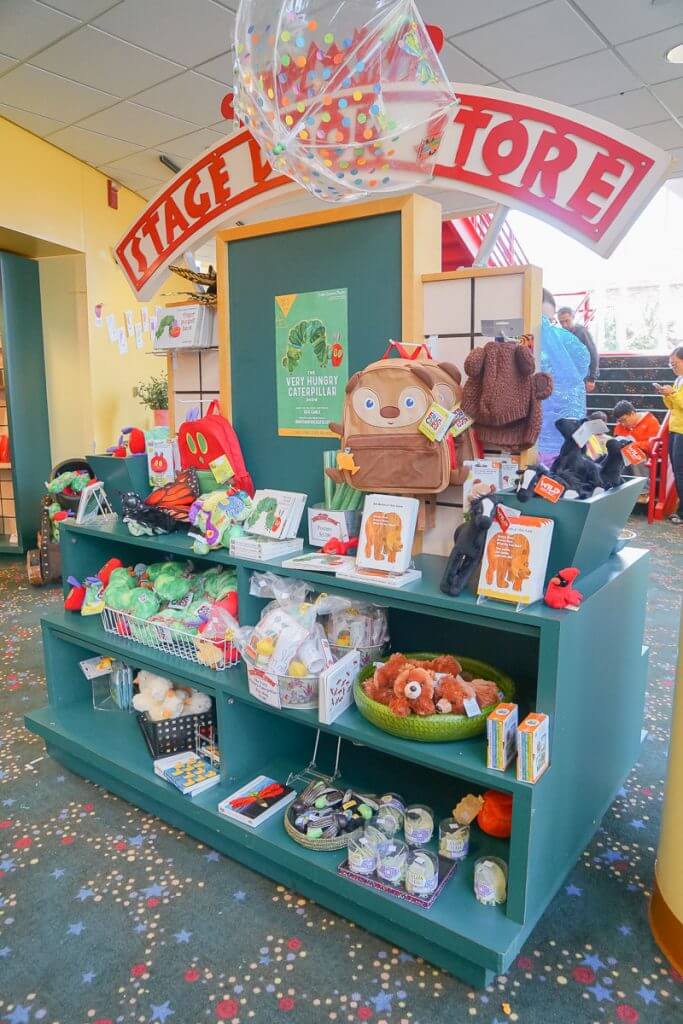 There were lots of books, plush characters, kids backpacks and more.

And on the other side, they had stuff for their next show: And In This Corner: Cassius Clay.

They also had a 50% off clearance section, just in time for early holiday shopping!

Want To See The Show? 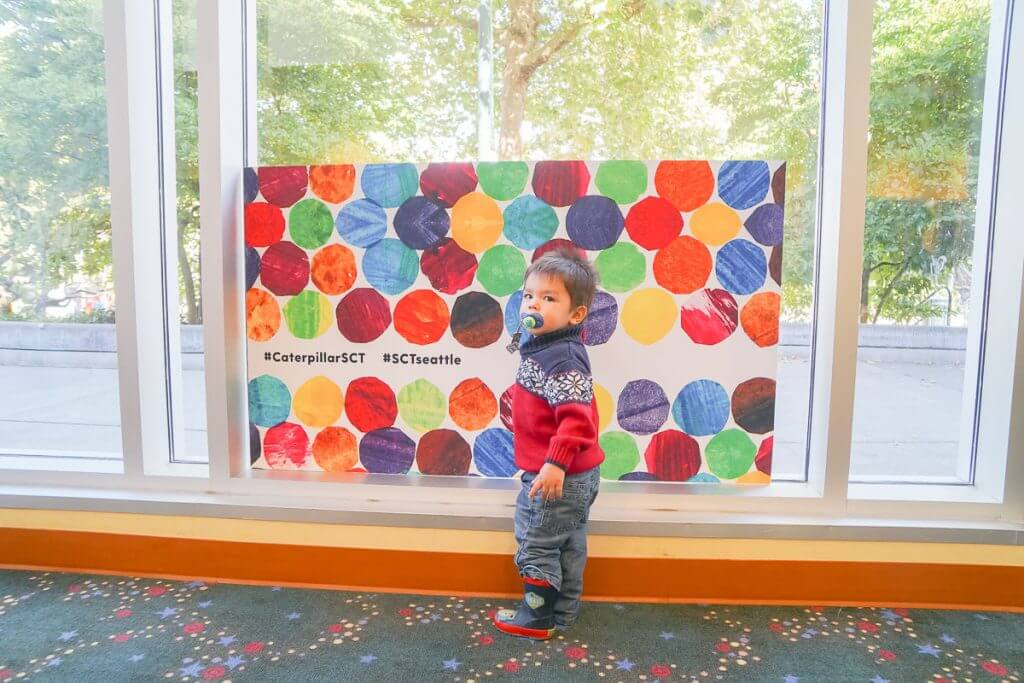 Since this is the first show of the season, you might consider getting season tickets. The way they do season tickets is really cool!

Basically, you buy a set of tickets (either weekday or weekend) and you have the flexibility to change the date you see the show. That’s super helpful when doing any activity with kids!

Plus, it encourages you to plan a fun family outing!

Thanks to the Seattle Children’s Theatre for providing tickets in exchange for an honest review. All opinions are my own.

Other Cool Things to do in Seattle with Kids 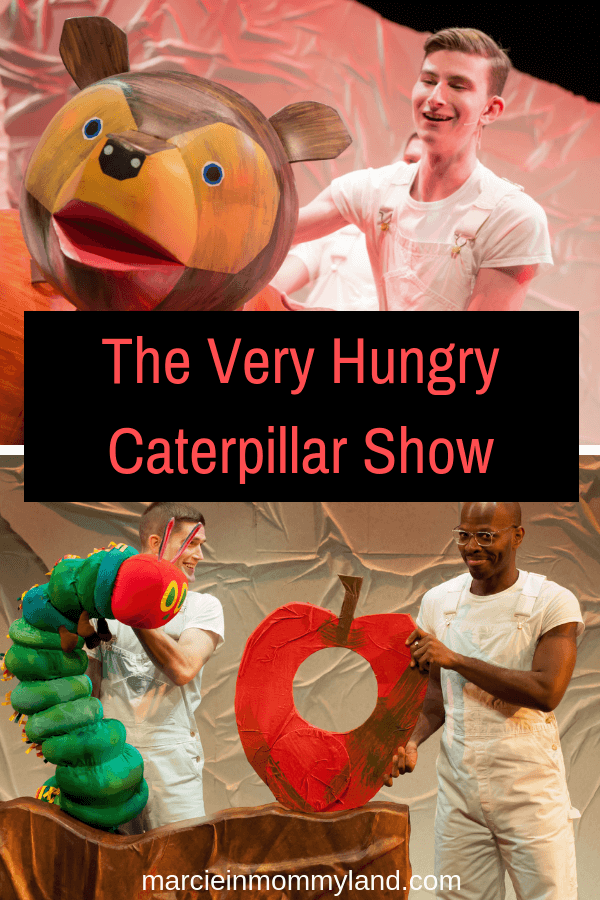 Great time for the kids ... wonderfully put together.

Wow, I didn't realize that this was in Seattle! I will have to pass this along to my mommy friends for something fun to do on the weekends :)

It just launched a few weeks ago and it's such a great production!

This sounds so great I am sure my 5 year nephew will enjoy it as much as his mommy :) I will share this with them!

Thanks for sharing! Hope they are inspired!

This looks like so much fun for toddlers and adults too. I love the bright colors and cute photo opps!

Right? I think I enjoyed it as much as my kiddos!

Aw! i remember when i first read this book as a kid! Cant believe they are actually making plays about it now ! Looks like an awesome idea, thanks for sharing!

Yes! I love it when books come to life because it encourages more kids to care about reading!