I was thrilled to be invited to the opening night of Naked Mole Rat Gets Dressed: The Rock Experience at Seattle Children’s Theatre last Friday. My 4 year old loves Mo Willems’ humorous books. However, we had just seen Hamilton at the Paramount. That’s a REALLY hard act to follow for any theatrical performance. But, I’m very passionate about arts for kids. Plus, we heard Mo Willems was going to be at opening night! Post contains affiliate links. 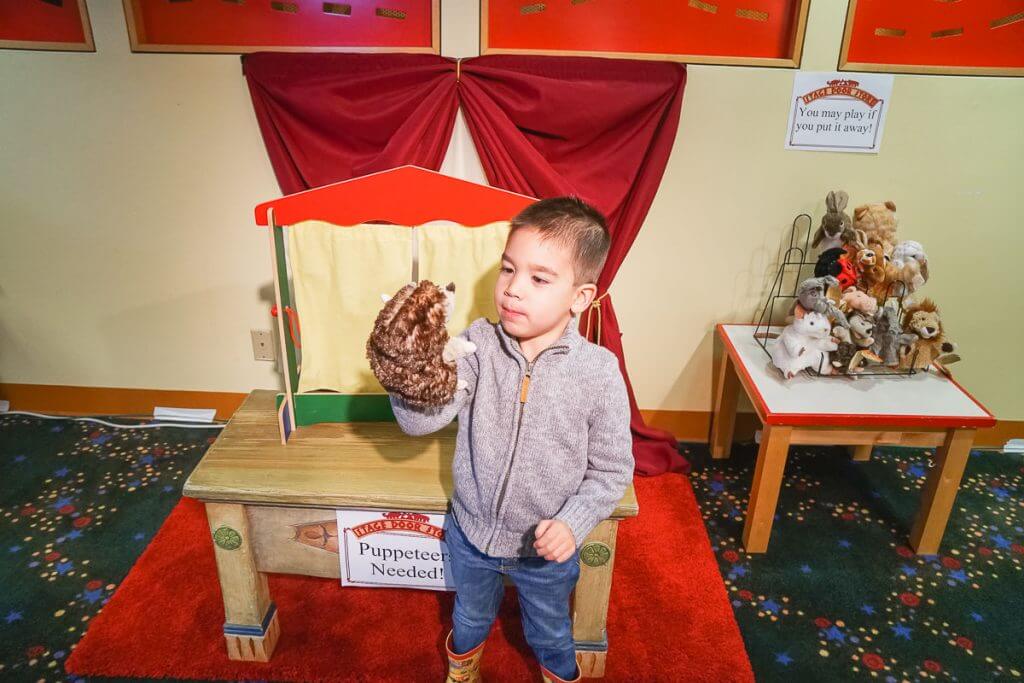 When I told my son we were going to see a play by Mo Willems (one of his favorite authors) he asked me if the pigeon would be there. Now, if you are familiar with Mo Willems, you’ve probably read Don’t Let the Pigeon Drive the Bus!, The Pigeon Finds a Hot Dog!

, Don’t Let the Pigeon Stay Up Late!, The Pigeon Needs a Bath! and more. In fact, there’s a new It’s a Busload of Pigeon Books! board book box set that just came out. 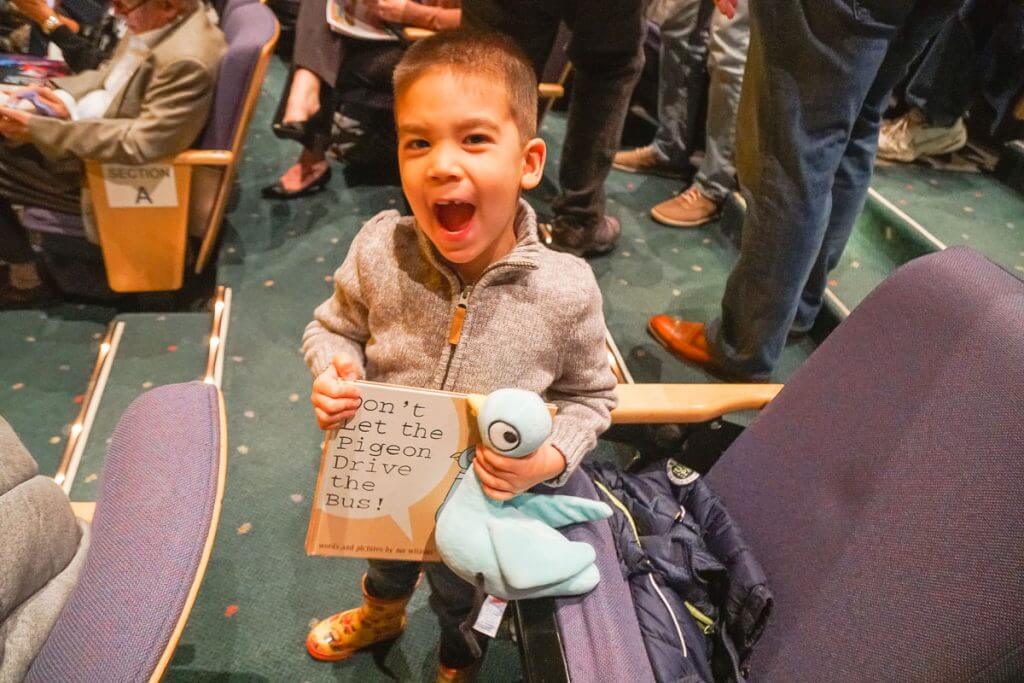 My son is a HUGE Mo Willems fan and was stoked to get his own talking pigeon from the Seattle Children’s Theatre gift shop! Photo credit: Marcie Cheung

Since I knew this play was based on the Mo Willems book Naked Mole Rat Gets Dressed, I told him I didn’t think we’d see the pigeon. However, my preschooler got the biggest smirk on his face when we went to the Seattle Children’s Theatre gift shop and low and behold, there was a stuffed pigeon. Let me rephrase that. It was a talking stuffed pigeon who shouts “Let me drive the bus!” when you squeeze him. We love supporting arts organizations for kids, so we didn’t think twice.

I’m really happy we stopped at the gift shop before the show. We wanted good seats so we entered the theatre as soon as it opened. That meant we had about 30 minutes to sit and wait. That’s hard for a 4 year old. Luckily, we brought a copy of Don’t Let the Pigeon Drive the Bus! that we read a few times while my son squeezed his pigeon at all the right moments!

We had not read this book before the show. Thankfully, there was a synopsis in the program that my son and I read together. Basically, the story takes place underground in mole rat tunnels. For some unexplained reason, clothes start falling from the sky inside the tunnels. One mole rat named Wilbur tries clothes on for the first time in his life and discovers that he loves how they make him feel. So, he starts putting on more and more clothes as they fall from the sky. Pretty soon, he decides to open his own clothing store.

The naked mole rats came out in all their glory to rock us with their music! Photo credit: Elise Bakketun

But, that’s when things take a turn. You see, all the other naked mole rats are appalled that he’s wearing clothes. They pressure him to take them off and be naked like the rest of them. It’s something that these naked mole rats revel in: the fact that they love to be naked. However, Wilbur doesn’t want to be like everyone else.

As you may guess, the end result is that individuality is a good thing.

Why I LOVED the show

I love it when kid programs throw in jokes and references for parents. Naked Mole Rat Gets Dressed: The Rock Experience is full of humor for both kids and parents!

I also thought it was an interactive performance. During on of the songs, a hat falls from the sky and the first line of the song is “what is that?” From the back of the theatre, a child’s voice immediately responded with “it’s a hat!” That just happened to be the next line of the song! The whole audience erupted in laughter!

At several points, the characters go through the audience and compliment them on their clothing. My son was singled out first about his sweater. He turned to me beaming! And at another point, the characters joked about how only a dad could pull of another look! 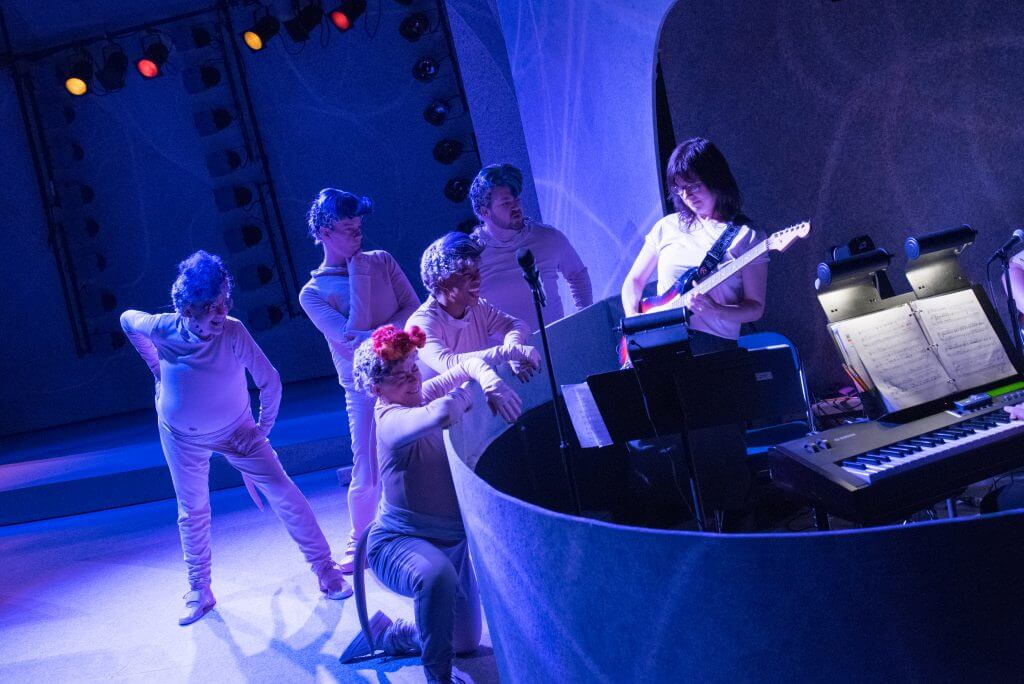 I loved all the live rock music coming from the band! Photo credit: Elise Bakketun

My 4 year old didn’t enjoy the show itself as much as I did. He told me it was “scary” and he was a bit confused during some scenes. It sounds like he was really put off by the naked mole rat costumes. In the program, there’s a photo of a real naked mole rat and he was pretty freaked out by it. Full disclosure: I took him to a show that started at his bedtime that was geared for kids a bit older than him, so he may have just been super tired.

Naked Mole Rat Gets Dressed: The Rock Experience featured great sets and fabulous music! I thought the costumes were on point. I was so impressed that their shoes were the same shade as their costumes. And those wigs had shades of grey and purple and they were mesmerizing!

Is it a good fit for YOUR family?

Are you fans of Kindiependent bands like Recess Monkey, The Not Its and Caspar Babypants? The humor and upbeat music is definitely has the same vibe. It’s the perfect show for kids to dance a little bit and for parents to listen closely to the hilarious lyrics. You can get tickets here. 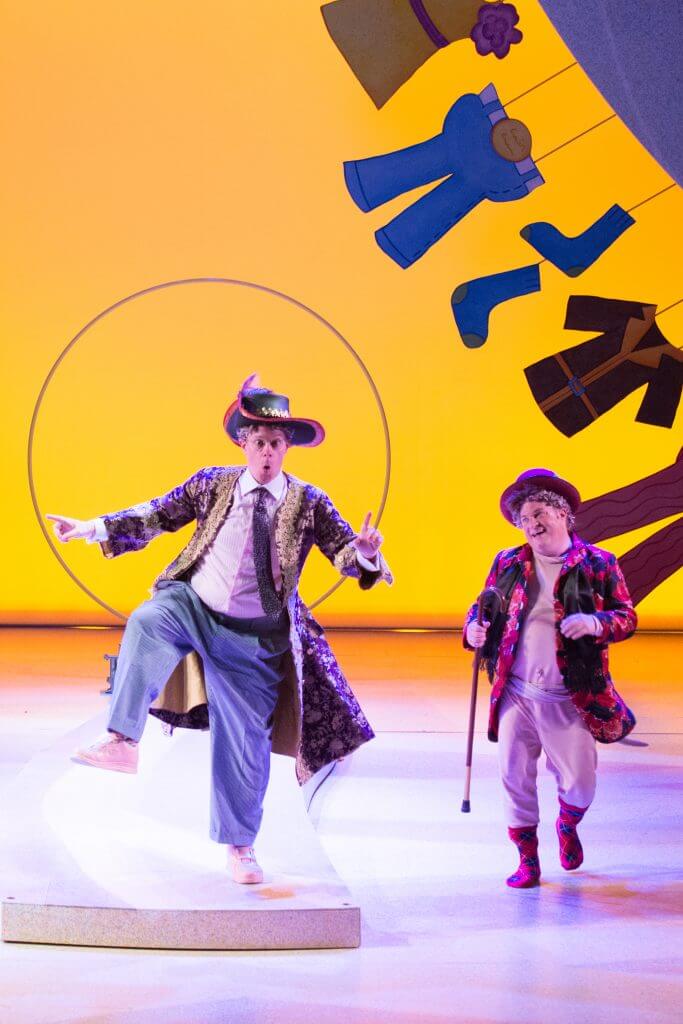 I love how they incorporated so many flashy clothes into this show! Photo credit: Elise Bakketun

Naked Mole Rat Gets Dressed: The Rock Experience is geared for kids ages 5 and up. It’s 60 minutes long without any intermission. If your kids are younger, I’d suggest going to a matinee performance. If your kids are a bit older, enjoy Seattle Center more and explore the Space Needle, Pacific Science Center or the Chihuly Garden and Glass Museum. 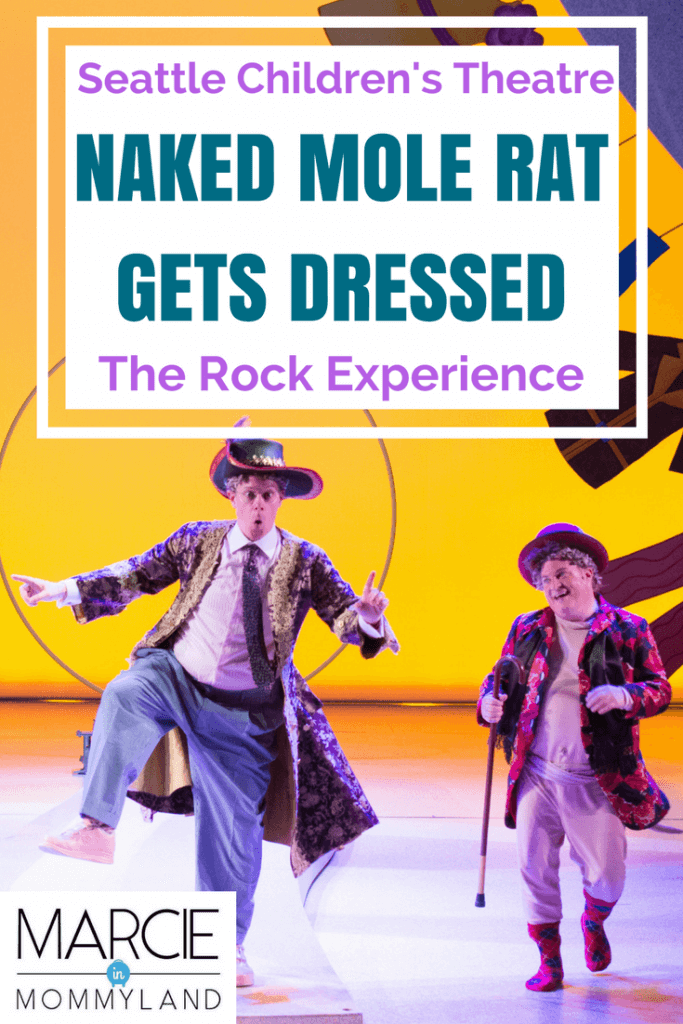 Fun Things in Seattle with Kids