Are you planning a trip to Paris? Get the scoop on everything you need to know about the best Disneyland Paris one day itinerary from U.K. blog Holidays from Hels. Scroll for all the top tips!

This Disneyland Paris one day itinerary contains affiliate links which means if you purchase something from one of my affiliate links, I may earn a small commission that goes back into maintaining this blog.

Disneyland Paris is on the minds of any true Disney fan when they start planning their European vacation.

I mean, Paris is the setting of Ratatouille and the Hunchback of Notre Dame. A Belle is a true French Disney princess!

So, when I heard that local U.K. blogger Hels from Holidays from Hels recently explored Disneyland Paris in a day, I asked her to share her top tips for making the most of a Disneyland Paris vacation. 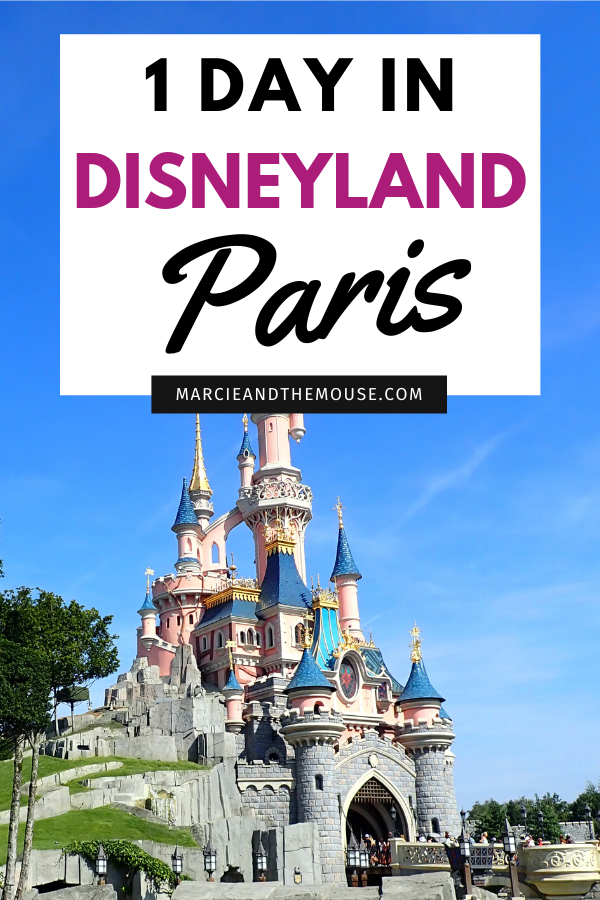 1. Hunt out ticket deals in advance

With a bit of Googling several months before traveling, you can get adult tickets for children’s prices. So, Disneyland Paris in a day cost us a pretty reasonable £55 each.

We did think buying in advance might also cut down on queuing time on the day itself, but the crowd at the entrance is pretty formidable whether you have a ticket or not.

2. Bonus features of staying in the Park

If you can afford the luxury of on-park accommodation, you are allowed in an hour before the rest of the world and have the run of the park, much like a real Prince or Princess. 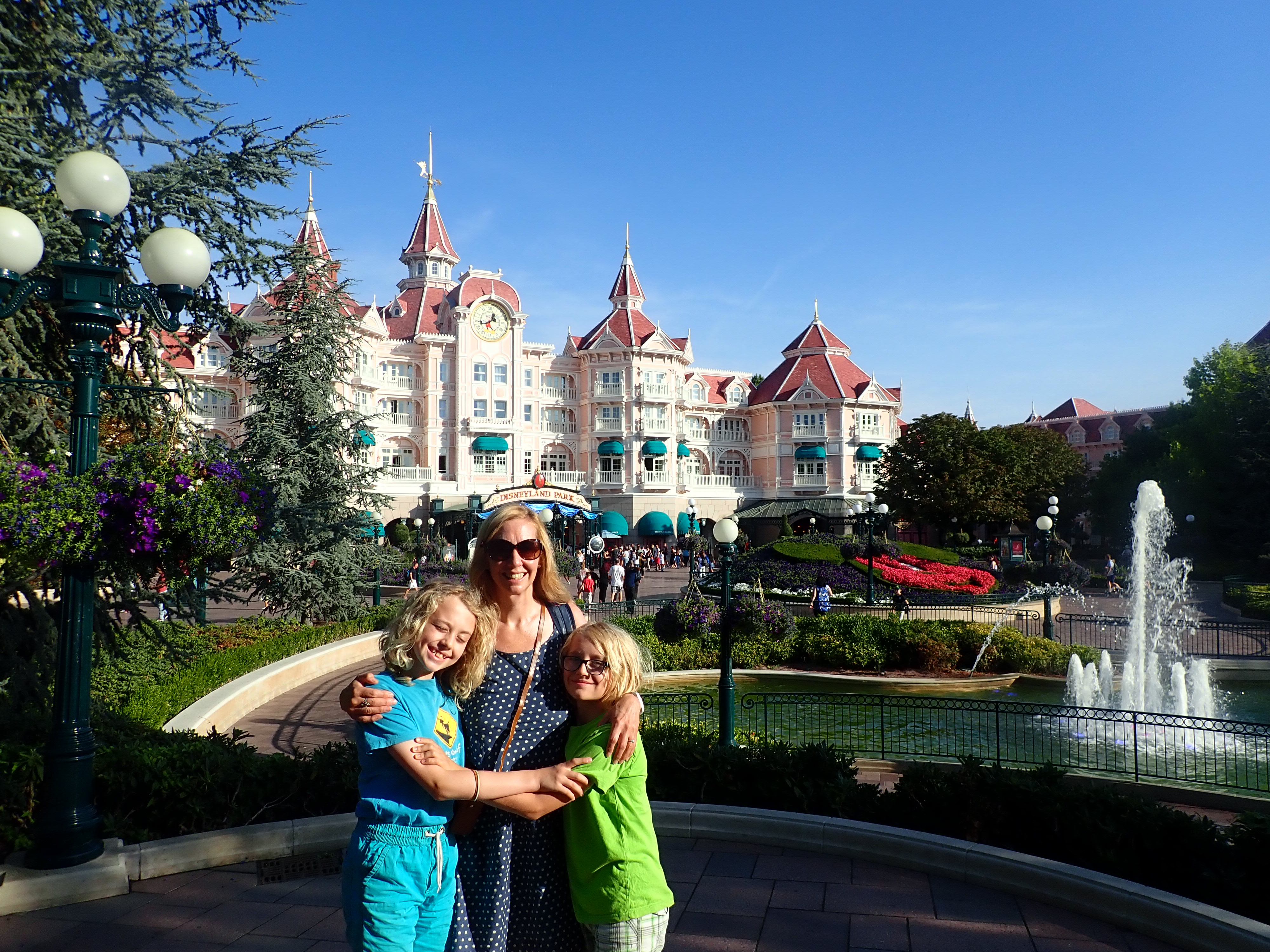 Photo courtesy of Holidays from Hels.

As an added bonus, you get a great view of the fireworks from your bedroom window at the end of the day and, importantly, avoid the last-bus-home-with-tired-kids scrum.

If the price of the Disney hotels is over budget (as it was for us) look for hotels just off the park, but within short free-shuttle distance. Trivago is our go to price comparison website.

Although there is a train directly to Disneyland from the center of Paris, the journey takes an hour and costs about 60E return for a family of four.

We didn’t want to have to get up too early on what would already be a long day, or risk getting lost in a capital city during valuable Disney ticket time.

The castle themed, Vienna Dreams Hotel was chosen mainly because the family rooms sported bunk beds with their own royal red curtains.

It also came with a maze, formal gardens, an outside tented area and a pretty amazing bar balcony.

4. Get to Disneyland Paris early for:

People-free photos on the outside

Off-site visitors arriving early get time to take un-peopled photographs of the exterior of the Magic Kingdom.

There are fountains and actual flowers painted silver and blue, as if you are the real Alice in Wonderland.

Front seat rides on the inside

The park officially opens at 10am. I don’t know if this usually happens, but the gates opened about half an hour early on the day we were there.

Despite crowds pouring in around us, we were spoilt for choice between empty walkways to Fantasyland, and the possibility of front seat rides.

Do this before you go, so you aren’t reading the instructions while others are busy booking up all the rides.

FastPasses are included with your ticket. Machines are dotted around the park where you can book one ride per person. You will be given a time to arrive at the ride, and the time between booking your pass and actually riding gets longer the later in the day you book.

At the allotted time, you join the fast queue for that ride and pretty much get straight on it. You can only have one FastPass at a time, so after you have finished your ride, go straight to a machine to book a fast pass for another ride.

You can probably fit about 5 in a day in August.

Having FastPasses lined up can make the day a bit regimented, always clock watching and making sure you get back to the right place at the right time, but pretty much eliminates the need to spend your holiday queuing.

Never having been to Disneyland before, and having done no ride research or even looked at a map, we stood on the threshold, dithering, while people swarmed in around us with determination and destinations in mind.

Lesson learned:  look at the rides online the night before and pick a top 3. On entry, go straight to a FastPass machine and book your number one ride. Then run to the furthest edges of the most distant kingdom, to parts where others will not yet have reached, where you can get straight to the front of an empty ride.

For a fast rider family, I would recommend the Indiana Jones and the Temple of Peril roller coaster.

Between FastPasses, we joined a series of increasingly lengthy queues for any old ride we came across. On reflection, we should have just soaked up the surprisingly green scenery around skull island and the pirate ship, explored secret tunnels behind waterfalls and ventured over rope bridges.

Wandering through the zones like Aladdin’s North Africa and having a go at a maze is part of the magic.

The queues build throughout the day, so maybe fit in any non-FastPass rides in the morning and become explorers as a post-lunch strategy. Photo courtesy of Holidays from Hels.

Fast, but not shockingly so. The mini-train does indeed thunder round a realistic looking red rock island, through a flooded section of track and dark tunnels, without feeling the need to flip anyone upside down.

Meet a giant Buzz then laser shoot neon aliens in the dark from a spinning carriage.

The Pirates of the Caribbean

Bit of a surprise this one. You snake round in an underground queue for so long that you suspect this may be an “experience” rather than a ride (the castle walls are just too realistic, maybe they are the whole point? In the North African section there is a cave system leading nowhere but out.)

Having traveled a worryingly long way in, with no evidence of actual ride, we finally spied, over a thousand heads in front of us, a row of boats, and were bobbed around underground caverns and mini-waterfalls on a piratey journey.

Great ride in the end and all the better for the great relief that it actually was one.

Beware – this ride is, as you would expect, pitch black and fires you, quite possibly, at the speed of light around its twisty track. Know your personal speed limit.

Sometimes, to cater or varying speed tolerances, this strategy can maintain family harmony.

Pair up the fast rider child with the fast rider parent. This way, no-one has to wait by themselves at the bottom of a ride they are not prepared to go on and not everyone has to lose an hour in the queue for the too-tame-for-a-10 year-old-really, Dumbo

10. Meet and greets at Disneyland Paris

Unless your child is demanding one, in which case you may have no choice, you may want to avoid these.

The Disney princess in the tower queue was a glacial hour and a half I will never see again. Apart from the odd glass slipper, there is little to entertain you along the way.

The outdoor meet and greeters only have about 30 minutes, so, if the queue is long, you may well wait and then have to watch them skip off at high speed (flanked by minders), to their next appointment, leaving a disintegrating line of disgruntled and disappointed children.

11. Where to stand for the Disneyland Paris parades

The regular parades of fire breathing dragons and Disney royalty are popular.  You would have to get to the parade route early to secure a ring side view and lose valuable time hanging around waiting for it to start.

Instead, get to high ground. The steps of the Disney castle worked for us.

12. Where to stand for the Disneyland Paris finale

As you would expect, large crowds gather for the biggest spectacle of the day, the fireworks.

Don’t decide, as we did, to grab a beer and a seat at a café in Main Street for the show, as they all close for the finale. They also take away all seating, like a really unfun game of musical chairs. 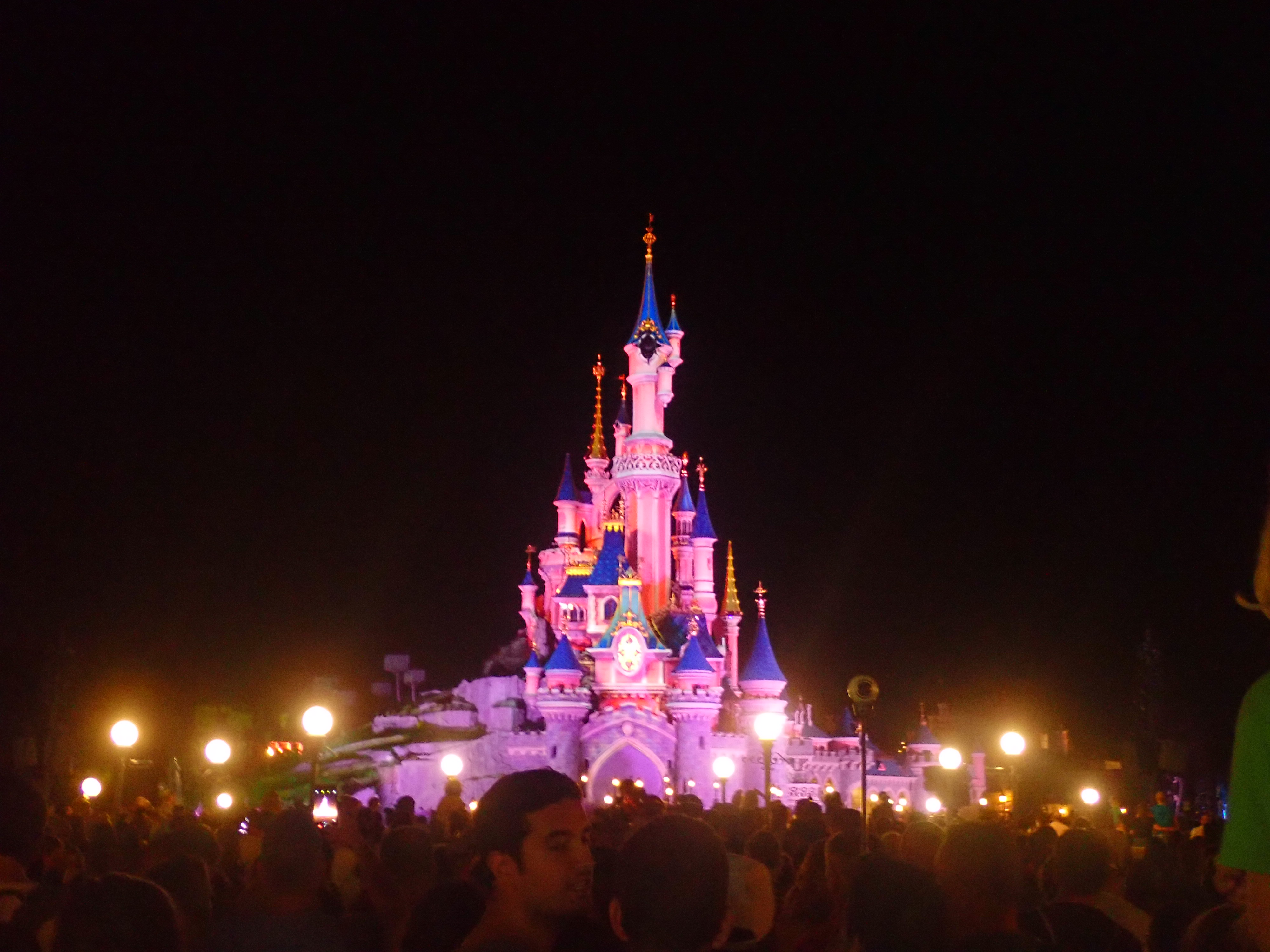 The show is amazing. The castle is illuminated in themes from all the Disney films, before being backlit by a series of colorful explosions, possibly reflecting in the fountains in front of it (if you happen to be near that bit).

Lesson learned: stand by the water for the reflections, or at the back near the park gates, for a quick getaway. If you are staying on site, watch from your bedroom window – with a chair and a beer and everything.

13. Beat the crowd to the bus stop

With literally thousands of people leaving at the same time, it really does make sense to leave a little bit early to get to the front of the shuttle queue, or at least be very near the exit when the last firework fades.

Do not go to the toilet at this point. It would be quicker to walk back to Paris to find one than to wait in the queue, and will mean another million people standing in front of you at the bus stop.

Final Thoughts on this Disneyland Paris One Day Itinerary:

In all, we found Disneyland Paris unexpectedly magical, even for grown ups and it would have been even more fun had we known the above. You will love it! Have an amazing adventure and do share your own top tips and comments!

My younger carefree self spent 2 and a half years pottering around the world. I am now all grown up and work in a school, which does allow me plenty of time, if not money, to keep exploring with my children and sharing the mishaps, surprises, stories and lessons learned in my new family adventures travel blog.

Or our family Moscow mini-break in the snowiest winter for 20 years – perfect whipped cream scenery for snow topped onion domed cathedrals and for tubing and ice skating in Gorky Park.