In my effort to explore fun places closer to home, I decided to gather up some Moms and toddlers and head to Point Defiance Zoo & Aquarium in Tacoma, WA. I had been here on a field trip when I was in 3rd grade and that was the last time. I had heard good things from friends about it being small enough to see before nap time. So, we met up at 10am on a Friday to see for ourselves.

It took about 45 minutes to get to from our home in Renton. I followed my GPS, which took me all the way to Point Defiance Park. I saw signs that suggested left turns to get to the Zoo along the way, which I’m assuming brings people to back lots. Not knowing where I was going, I opted to take the official route. I followed the signage to the parking lots, picked a spot and looked around to see which direction people were heading. I didn’t see much signage about where the entrance was.

When we got to the entrance, the line moved really quickly. We were asked if we wanted to donate $5 to support conservation efforts and get a small stuffed animal. We usually donate anyway to help non-profits or parks. Getting to choose a stuffed animal was a lot of fun for my toddler! After getting our tickets, we went to the entrance and scanned our own tickets before getting through the gate. Being 8.5 months pregnant at the time, our first stop was the restrooms!

Our toddlers were surprisingly fascinated listening to the staff member talk about plankton.

Our friends arrived a few minutes before us and were already in the Aquarium, so that was where we headed. Even though my toddler isn’t a fan of touching sea life, we went into that area just to see what was there. I really liked that the steps up to the tanks were perfect for toddlers and I didn’t need to lift mine up to see (which has been a problem other places.) After he had sufficiently looked at the starfishes and sea cucumbers, he went over to a large mural with flaps he could lift up. I wasn’t able to focus on what the mural was about because I was so focused on the flap that featured a boy with a boom box and I wondered how old the mural was!

After we exited that area, there was a staff member set up in the corner with a projector of live plankton. She patiently showed the toddlers how to shine a flashlight on the microscope and how to look into the microscope. These were both skills previously unknown to our toddlers, so it was quite exciting! The stool brought the toddlers to the right height to fully experience this.

We headed downstairs, just past the large shark jaw that freaked out my toddler. Once I told him it was “just pretend” he was able to make a bee-line for the stairs. At the bottom of the stairs were two of those pressed penny machines. This intrigued the toddlers more than the exhibits downstairs, so we spent some time playing with the machines before deciding to explore the Zoo area. 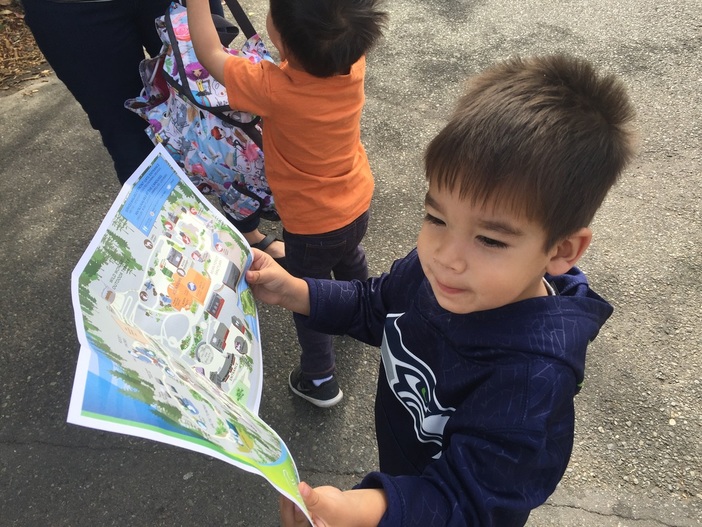 After awhile, we let the toddlers navigate us around the Zoo

The Zoo area was fabulous! It felt almost intimate as we were able to get pretty close to the animals (without being TOO close.) This was especially true for the exhibit with the Anoa and the monkey named Bobby. My son was simply mesmerized as we stood behind the floor to sky window and watched them interact with each other. Once a group of kids flocked the area, Bobby the Monkey started playing around and really hamming it up for the crowd! And the Anoa kept walking laps around the area and right in front of the window, which made the kids all erupt in “oohs” and “wows!”

After a good 15 minutes admiring Bobby and the Anoa, we headed to see the tiger. Again, it was handy that I didn’t need to lift up my 30lb toddler to get a better look as he could see perfectly fine from tiered seating area. We opted to have a light snack while watching the tiger roam around. Then, we headed to see the elephant. There was a bench that wrapped around a tree so we stood the boys on the bench to get a better view of the elephant, who was eating. The boys decided that running around on the bench was more exciting, so we quickly moved on.

We also came across the Camel Ride area, which looked really fun! Kids have to be 3 years old and at least 36 inches tall. My toddler is 2.75 and I was tempted to say he was 3, but after carefully watching other kids on the ride, I realized that kids needs to be able to hold on tightly. No need to rush! I told my son we’d do it next year. 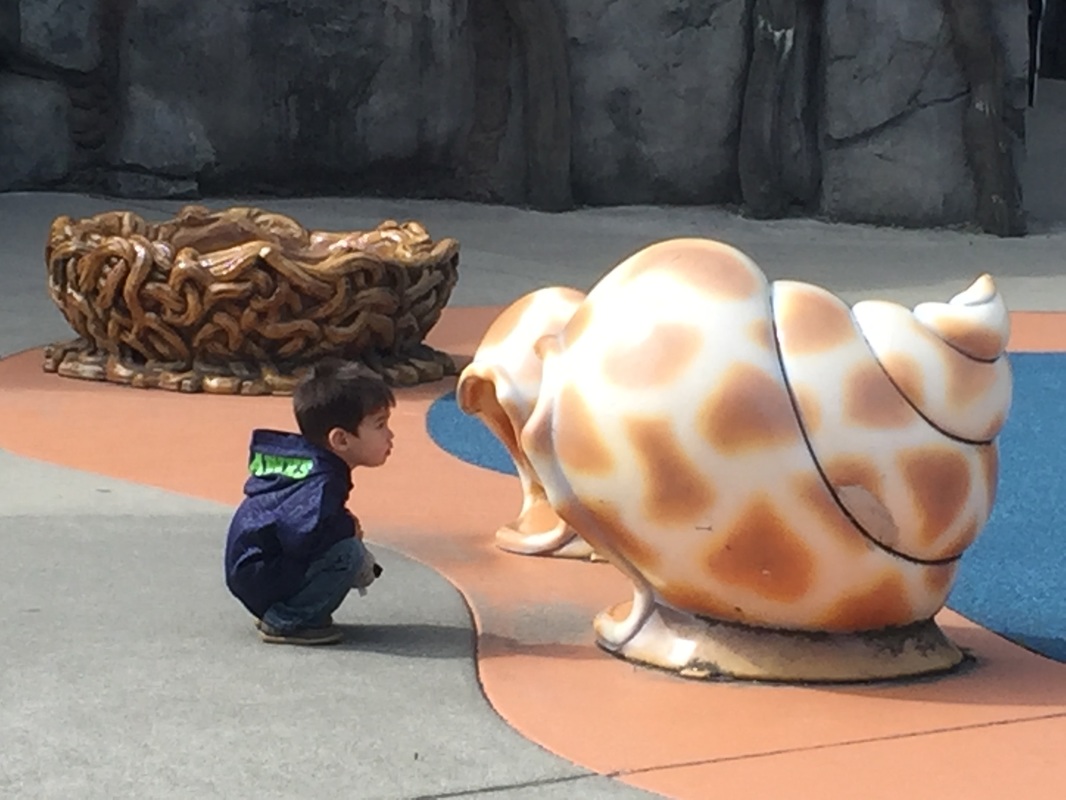 My son was very intrigued by what might be inside the shell in the Animal Avenue area of the Kids’ Zone.

The boys seemed done looking at animals, so we thought we’d check out the play area we found on the map. Of course, it was up at the top of the hill near the entrance, so we had to walk uphill the whole way. And our toddlers were physically pretty tired from running around the Zoo and they all wanted to be carried. Being very, very, pregnant, I wasn’t up for that task. It took us about 20 minutes to slowly walk to the play area.

We arrived at the Animal Avenue and were disappointed at the lack of interactiveness with the items there. It was a large space, which made the activities there seem really small. It took us about 15 minutes to realize it wasn’t the main play area. Once we walked around to the other side (Magical Movement) we saw an area much more suited for our toddlers. The favorite item was the slide because at the top of the slide was an amazing view of construction vehicles. They also enjoyed going down the slides over and over again. 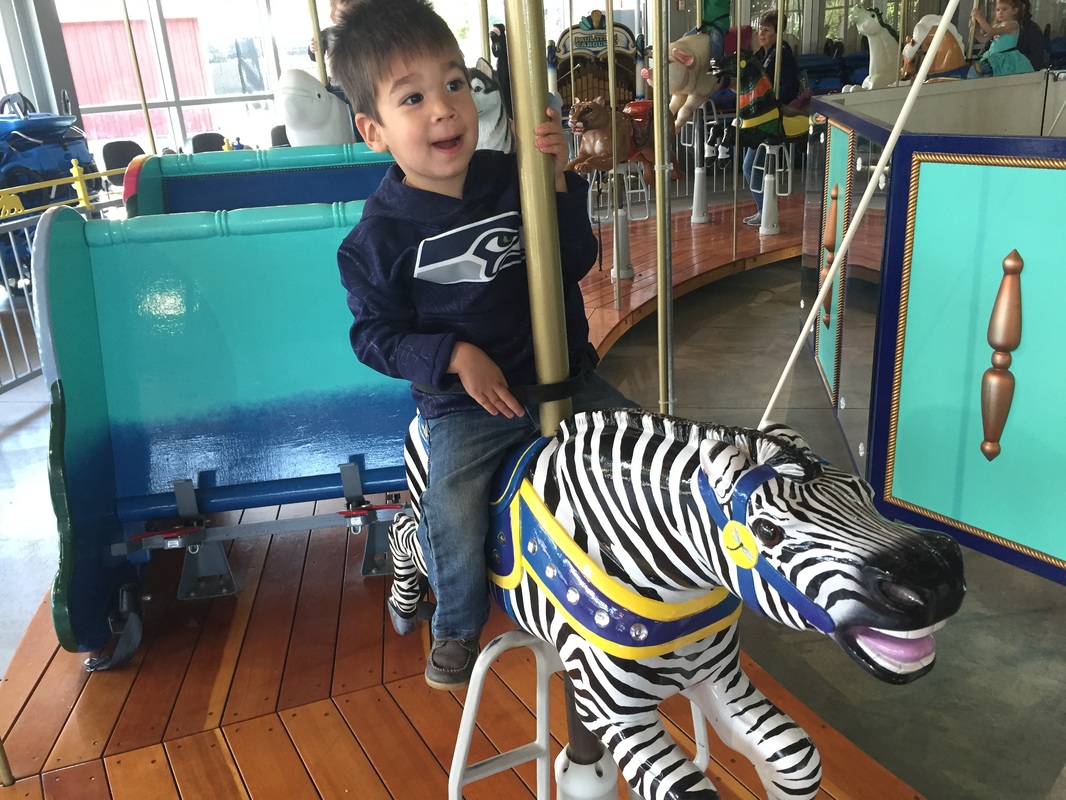 Riding the Carousel was the best way to end our day at Point Defiance Zoo & Aquarium!

At this point, we’d been at Point Defiance for about 2 hours and it was lunch time. So, we headed to their Cafe to grab some food. I really liked the selection of items. I was a bit shocked that my total ended up being almost $18 for a sandwich, fries, soda and Goldfish crackers. Kids meal prices were better and I might just do that in the future, if we don’t bring lunch.

My biggest complaint about the Cafe is that they put a shelf of toddler snack items right at toddler height near the cashier. This caused a huge meltdown when I told my toddler he couldn’t have a bag of gummy bears for lunch. He ended up running off with the bag clenched in his little fists. This forced me out of line, having to chase him, ripped the gummy bears out of his hands and explain why that wouldn’t be a suitable lunch option. Thankfully, I was with awesome friends who shared their food with him while I headed back to return the gummy bears to the shelf. Of course, by that time, there were about 20 people in line in front of me. Had I been alone with my toddler, we would have just left at that point. Waiting in the line and then waiting for my food cost about 25 minutes. This was a steep price to pay with a toddler on the verge of needing a nap.

But, I’m always a fan of ending adventures on a high note, so we made it a priority to hit up the Carousel before heading home. It was such a fabulous experience! For one thing, it only costs $1.50 to ride. If you are planning on just standing next to your toddler, you don’t have to pay for yourself. The Carousel has lots of colorful animals and benches, so kids of all ages can enjoy. My toddler rode the Zebra and he was quite excited! He had such a good time that we decided to do one more time before heading home. 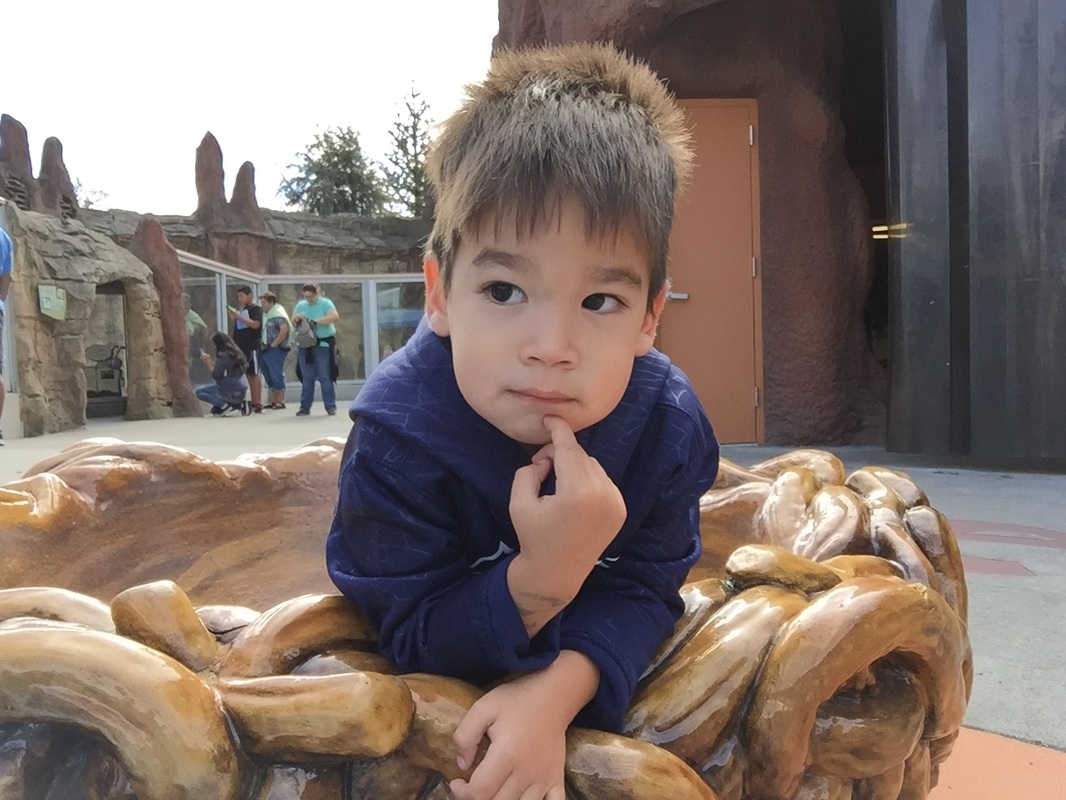 Hanging out in a nest in the Animal Avenue

Other Things to Do in Tacoma

Being a former employee of the zoo, I would have to say that your review is accurate and your tips are spot on. Nice job!

Thanks Aimee! It's such a fun place and I love that it's totally doable in a morning before lunch. I've also heard their holiday light display is amazing!