Are you planning a trip to Los Angeles and want to score free James Corden tickets? Keep scrolling to find out everything you need to know about getting Late Late Show tickets!

This post about how to score Late Late show tickets contains affiliate links which means if you purchase something from one of my affiliate links, I may earn a small commission that goes back into maintaining this blog.

Last month, my Mom emailed to see if she could fly up from Kauai to visit. She offered to watch the kids for a few nights so my husband and I could go for a kid-free getaway. Score!

Usually, we do a weekend away somewhere locally. However, this time, I set my sights a bit higher. We went to LOS ANGELES!

My main reason for going was to get the full Hollywood experience. I wanted to be in the studio audience of a TV taping. One of my favorite ways to get a chuckle is to watch Carpool Karaoke.

years ago. And his book (May I Have Your Attention, Please?: The Autobiography

) has been on my reading list this past year.

How to Get Free Late Late Show Tickets

After a quick Google search for free Late Late Show tickets, I realized that 1iota seems to be the main place to go for late night shows in LA.

They have free tickets to Jimmy Kimmel Live and The Voice. Plus, they offer free tickets to LIVE with Kelly & Ryan, The View, Good Morning America, and Late Night with Seth Meyers in New York City.

I’m keeping my eyes out for free TV taping tickets for my upcoming trip to New York City!

Here’s what you need to know about scoring free James Corden tickets.

You’ll see a “Score Tickets” area listing free TV tapings for the next 2 months. You want to find one that says “open.” Ones that are unavailable will say “sold out” in red letters.

When you click on an “open” date, you will see the date and time of the tv show taping. You may also be able to see who the guests are that show.

Select “request tickets” and you’ll be directed to a short form. Here, you’ll be able to request up to 4 tickets. You also need to write about why you love James Corden.

That’s it! You’ll need to keep your confirmation email for when you arrive. They will also send you a short video about what to expect when you arrive to CBS Studios.

What Happens Before the Show?

Parking for the Late Late Show

In your email, 1iota will encourage you to park at The Grove in Los Angeles. They have a parking garage there. Then, walk through The Grove shopping center and around the corner to get to CBS Studios.

Waiting in Line Outside CBS Studios

We arrived right when the email suggested we get there. The sun was out and we were quite warm. 1iota staff members welcomed us and offered us an umbrella to shield us from the sun. We were so thankful for that!

We went in February and the weather went from scorching hot to chilly while we were in line. That’s Los Angeles for you! 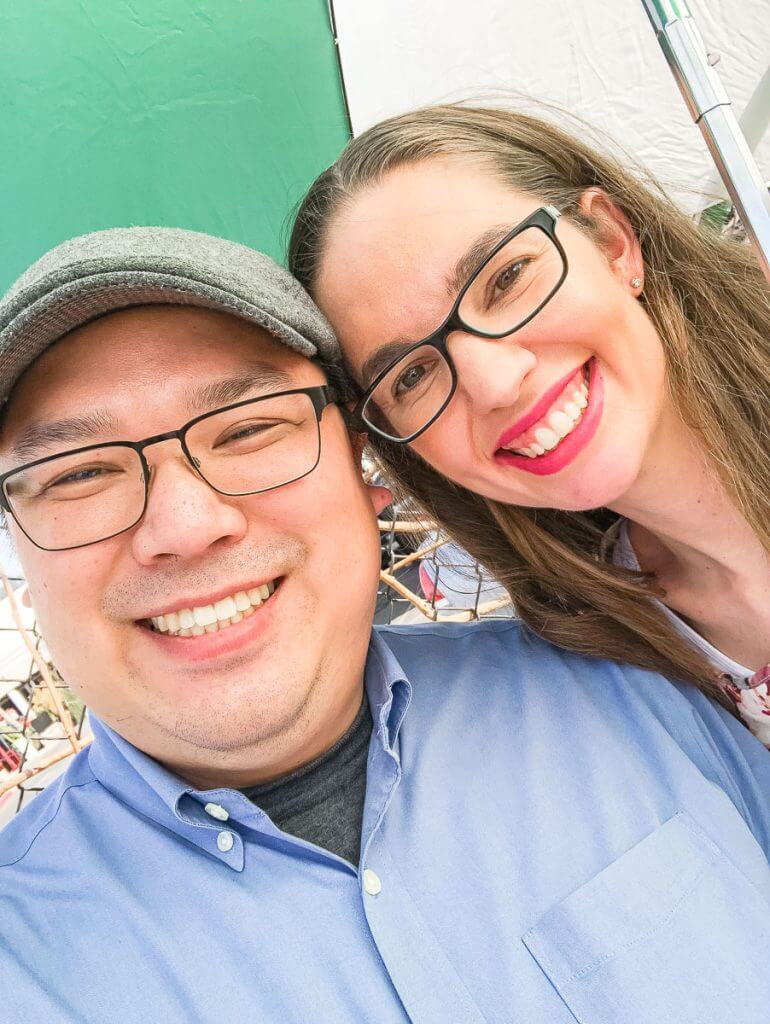 My husband and I shielded ourselves from the Los Angeles sun with an umbrella provided by 1iota staff at The Late Late Show with James Corden. Photo credit: Darren Cheung

There’s no place to sit down here because you will be waiting on the sidewalk next to the street. If you are going with other people, you might want to send someone to grab food or drinks while you wait. There are places nearby.

As it gets closer to filming time, a 1iota staff member will check tickets and start discretely assigning you a seat in the studio. You will be sent through security and then someone will tell you which row of seats to sit in. These rows are by location within the studio.

One of the fun things about having Late Late Show tickets is that you can take advantage of the photo ops outside the CBS Studios.

My favorite thing was the cutout of Carpool Karaoke where you can pretend to sing along with James Corden. I got a tip from another audience member to look a certain direction for a better photo!

Once you are seated in the undercover holding area at CBS studios, they will show you a video about how to be a good studio audience member.

This includes not yelling at guests, not talking on the phone, looking interested, etc. Pretty basic stuff. Something that they really highlight is that you should clap enthusiastically when directed. It’s a high energy show.

We got to see the fun photo booth photos of celebrities who were guests of the Late Late Show. Unfortunately, you won’t be able to take photos of them.

1iota staff will show you your assigned seats. They may swap people around a bit. Some select people will stand in the bar area. Special guests will sit in comfy seats on the floor. The rest of the studio audience will sit in normal chairs on risers.

Then the fun starts! A British man (no, not James Corden) will come out to pump everyone up. He’s delightful! He will encourage you to amp up your energy and really be loud. He’ll tell you to clap with your hands up in the air so the cameras can tell you are clapping.

Before you know it, it’s show time! Literally! James Corden will pop out and do his monologue. Then, there’s a brief break while the British guy tells you what’s next and how to respond.

For our show, it was a video about the Emmy’s featuring James Corden’s parents. It was pretty adorable and James Corden watched the video intently. 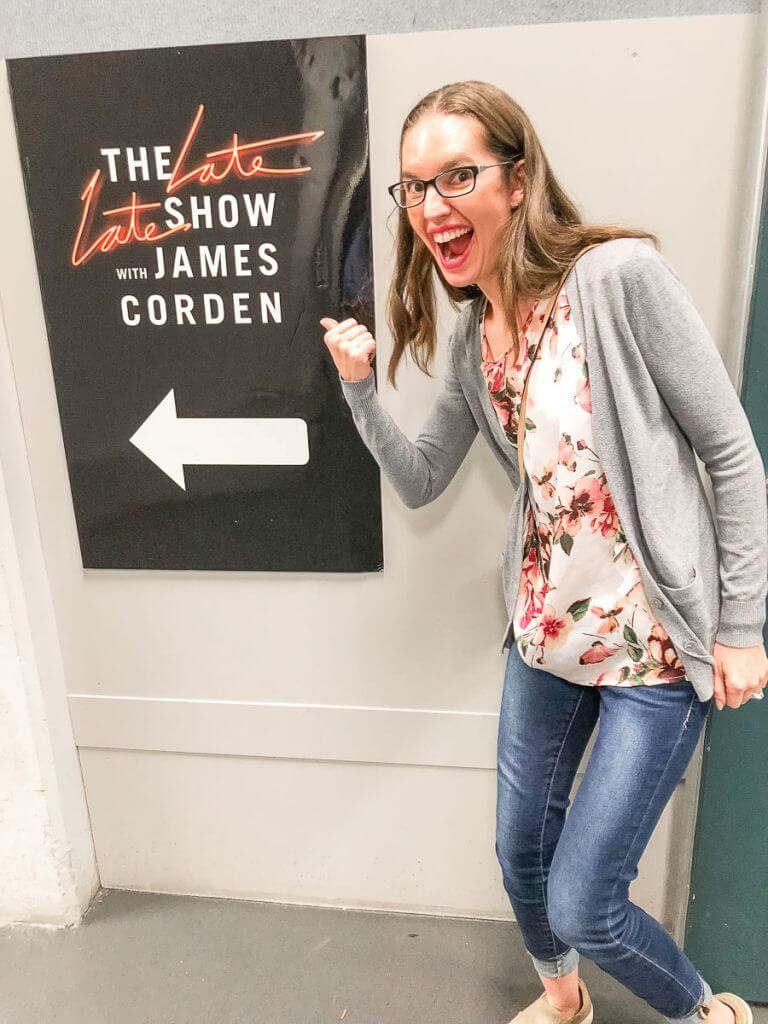 I couldn’t pass up this photo op after we left the soundstage for the Late Late Show with James Corden in Los Angeles, CA. Photo credit: Darren Cheung

Then, it was time for the guests! It was Jamie Dornan from 50 Shades of Grey and Pete Holmes from the HBO series Crashing

. I hadn’t seen either of these and didn’t really know much about these actors. But they were entertaining enough.

That went pretty quickly and it was time for the musical guest. It was someone I’d never heard of. He messed up the first time and had to reshoot it after the show finished taping.

Before we could go, they had us shoot audience reactions for a bit about Peter Rabbit. We were told to look surprised and then confused and then pretend to be amused. It was kind of weird, but fun that we’d be on TV again.

My Tips for Potential Audience Members

You can always cancel your Late Late Show tickets if your plans change. We were on the waiting list for tickets about 2 weeks out. It’s better to plan ahead if you really want to score James Corden show tickets!

Coming from Seattle, my husband and I don’t tend to dress up. In fact, I usually have 3 layers on to shield me from the weather! So I wasn’t sure about the dress code.

However, we noticed that most of the audience were in cocktail attire. And the women wore high heels and short, short skirts. And everyone’s hair and make up was on point. If you think you are over-dressed, you aren’t.

3. Don’t Get There TOO Early

I’m a rule follower and we got there a few minutes before the email said to arrive. Next time, we’ll arrive an hour later. We saw people arriving after we had already seen the video for studio audience members.

We didn’t get better seats for arriving early.

You will spend a lot of time waiting. There’s the waiting on the sidewalk in the blistering sun. Then, you’ll be seated on the benches at CBS Studios for awhile.

This is a great time to hydrate and eat snacks. You’ll want to be fueled for all the high energy clapping!

Better yet, send a friend to pick up something while you’re waiting in line!

5. Treat Yourself to Macarons After

When the TV taping of the Late Late Show with James Corden is over, you’ll most likely be hungry.

Thankfully, CBS Studios is located right next to The Grove. And it’s home to one of the chicest macaron places: Laderee. Go ahead and treat yourself to a few macarons!

Where to Stay Near CBS Studios

They are right across the street from The Grove, near CBS Studios. You can check rates here.

A little further away (but still super close) is the Park Plaza Lodge Hotel.

This is a great budget-friendly option. You can check rates here.

This is another affordable Los Angeles hotel about 0.5 miles from CBS Studios.

You can check rates here.

Hope this helps you score The Late Late Show with James Corden tickets on your next trip to Los Angeles!

See What Else to do in Los Angeles 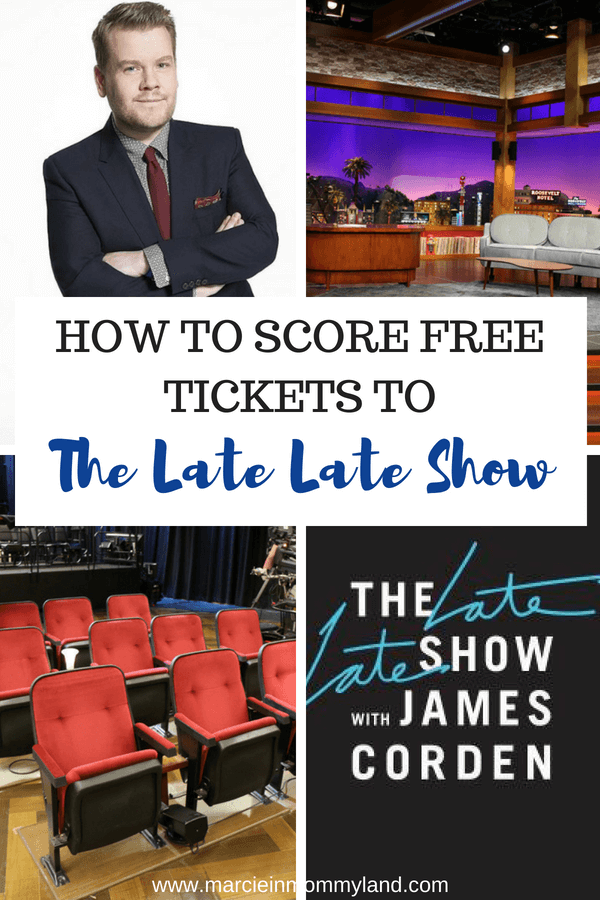 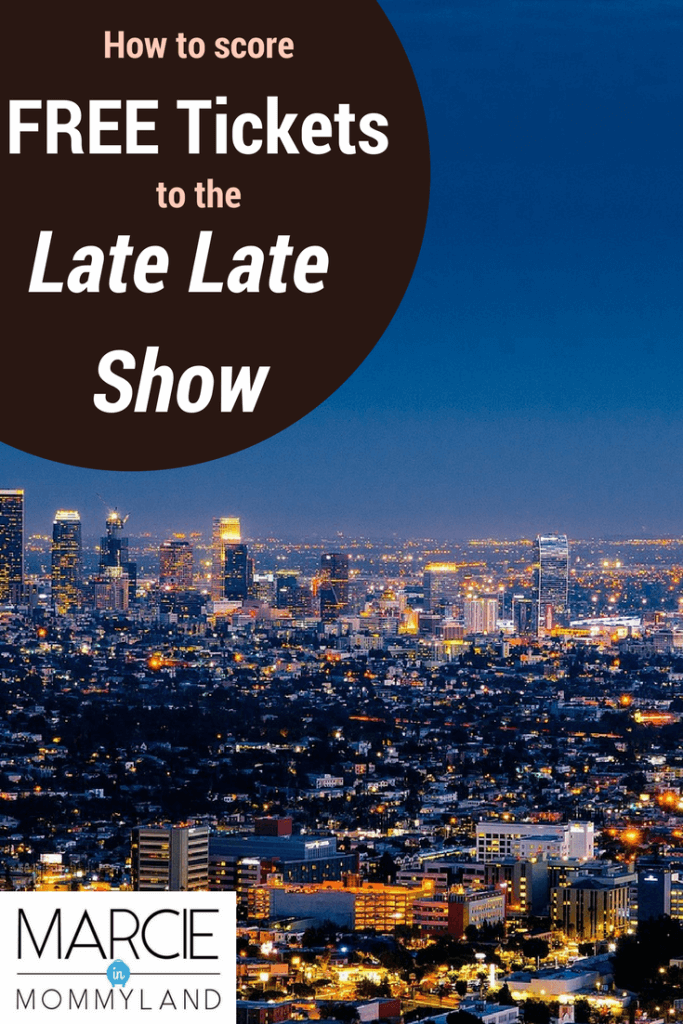 I loved reading your post, especially because I have tickets to go next Wednesday. We are at the 5.30pm taping and wondered when we can expect to get out afterwards? Do you think turning up at 5.15pm will be ok? Thanks!

Oh how exciting! I'm guessing you'll be ok showing up at 5:15pm, but you never know. It sometimes varies when you'll get out (if you are filming promos or extra stuff) but my guess is that you'll be out in time for a late dinner. Have fun!

Hi there, just wondering if you were able to take your bag and cell phone inside??

Yes, we were able to take in both, BUT we couldn't have cell phones out once we got inside the building. I just had a small purse with me, but I saw people with large purses.

Oh my gosh, James Corden is so hilarious, what a fun experience! So glad you got to have a fun getaway!

It was our first time flying without our kids!

How fun! I've never been to a live show taping before and I'd absolutely love to go see the Late, Late show! Looks like so much fun!

It was such an interesting experience!

Thanks for the tips! I love freebies while traveling. :)