How to Get Free Late Night with Seth Meyers Tickets

My husband and I went to New York City for the first time in May. Since we were kid-free, we wanted to do as many activities that we wouldn’t normally be able to do.

On our trip to Los Angeles, we got free tickets to The Late Late Show with James Corden. We wanted to know what the NYC TV taping experience was like. So, I went back to the 1iota website and scored free Late Night with Seth Meyers tickets. May contain affiliate links.

The first thing you’ll need to do is go to the 1iota website. From there, you can search for tickets to Seth Meyers, or scroll down until you see Seth Meyers show tickets.

When you click the link, it will take you to the ticket calendar. 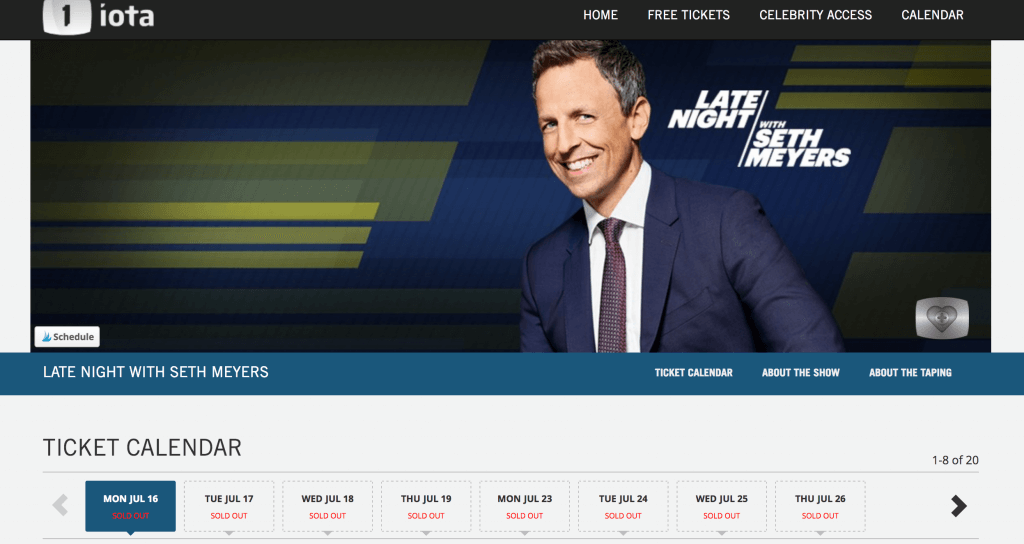 This is the screen from the 1iota webpage for Late Night with Seth Meyers.

I *may* have stalked this page religiously so I could get first crack at Seth Meyers tickets. They usually post tickets a few weeks prior to the taping dates.

Once your dates become available (it will say “OPEN” under the date) then you click to “JOIN WAITLIST.” It will take you to a screen where you can request up to 4 tickets.

Only people ages 16 and older can be in the audience.

You’ll also have an opportunity to plead your case as to why YOU want to see Late Night with Seth Meyers.

Here’s where you choose a date that’s available.

Just because your date is available and tickets are available, it doesn’t mean you will get those tickets.

I have no idea what their process is to determine who receives free Late Night with Seth Meyers tickets.

I explained that it was our first trip to NYC and we were kid-free and really wanted to attend the show because we’re huge Seth Meyers fans.

I requested tickets one month prior to our taping. They sent me an email confirmation that I was on the waitlist.

Then, I got an status update email two weeks prior that said my status was now “available.” That means I needed to click the button in the email to confirm our tickets.

One week prior, I got an email with our electronic tickets. SAVE THIS EMAIL! You’ll need to show your tickets when you get there.

Know Before You Go

What Happened When We Arrived at Late Night with Seth Meyers

So, when we went to see James Corden in Los Angeles, they wanted everyone there 45 minutes early. BUT, people line up much earlier than that trying to get the prime spots. It’s a lot of waiting in the hot LA afternoon sun. 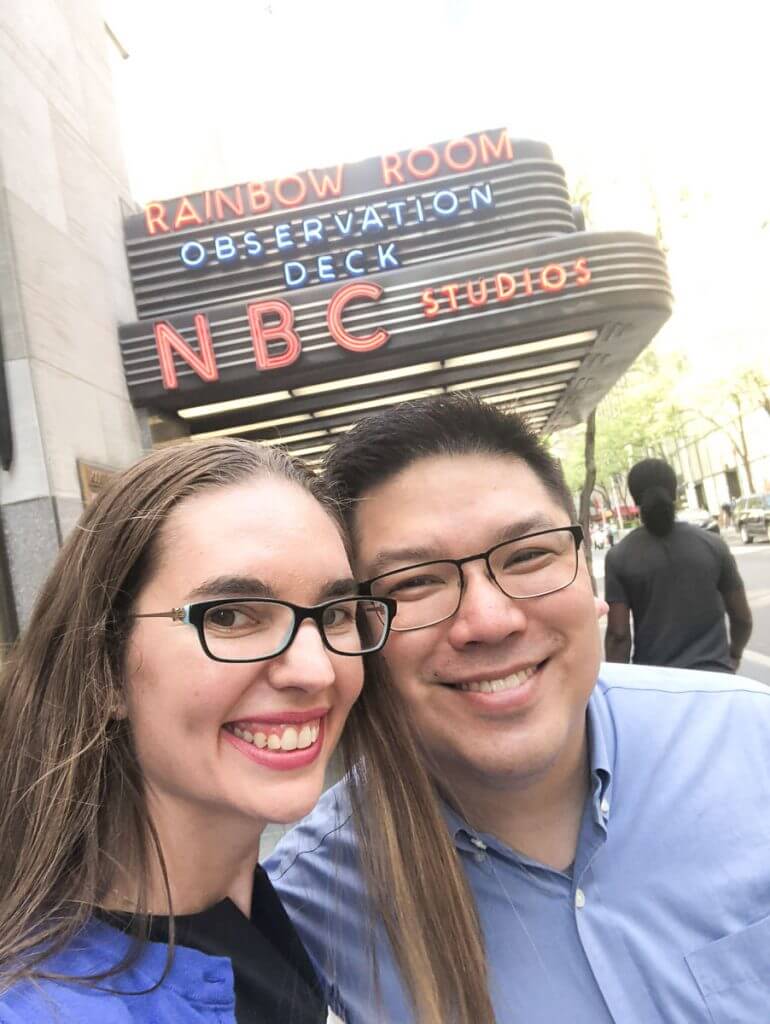 We snapped a quick selfie outside NBC Studios.

We weren’t sure what the protocol was for Late Night with Seth Meyers, so my husband and I got there really early. It was too early and we were told to come back 45 minutes early.

We ended up getting hotdogs and bottled water, and exploring Rockefeller Center a bit.

The line moved slowly and I took a selfie in case I ended up blogging about the experience but didn’t realize that photos weren’t allowed while we were in line. I dodged a bullet and just got a warning. 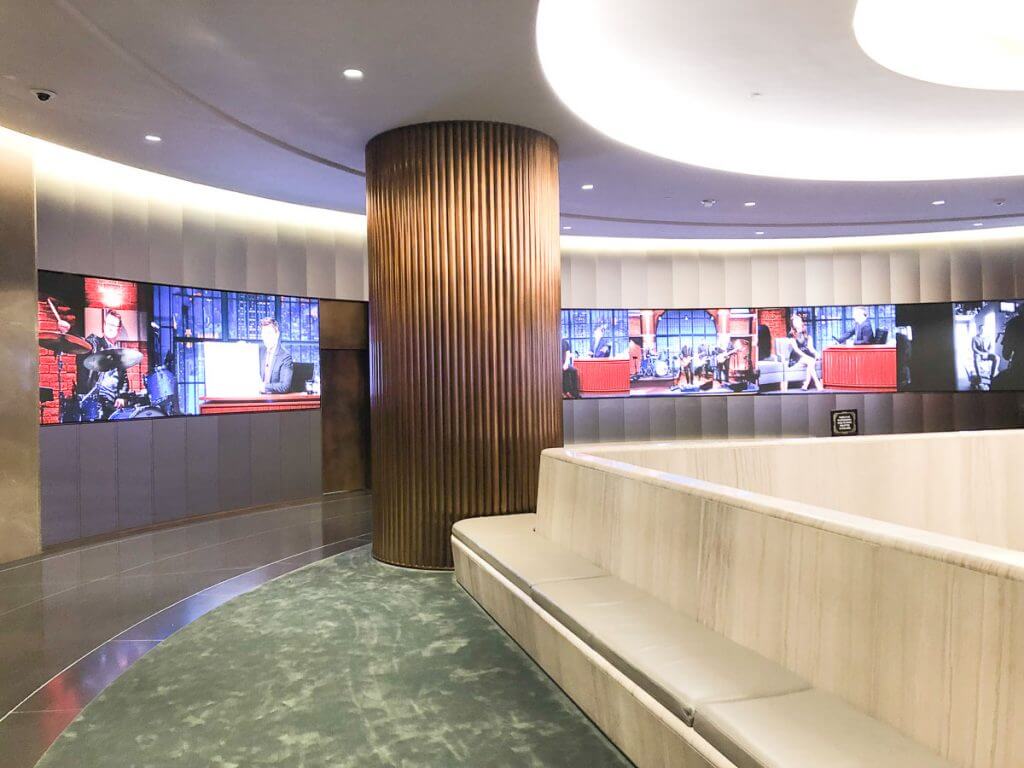 This is a photo I took in line before realizing photography wasn’t allowed.

We showed our tickets and ID a third time and then headed to a desk where they gave us green tickets with the number 50 on them.

Some people got single letters, double letters, or tickets of other colors. It must be the seating chart of the set, but I’m not sure how they assign seats.

Then, we went through security and checked in with a Page. The Page told us to sit on a specific side of the waiting room.

Then, a different Page came out and played games with the crowd to keep us occupied. He asked me to name Seth Meyers’ co-hosts on Weekend Update and I mistakenly blurted out “Amy Poehler and Tina Fey!” The correct answer is Amy Poehler and Cecily Strong, which I totally knew!

They did a dance off contest that made me feel a bit old. And then played a video highlighting some of the top moments at Late Night. That was a brilliant move because it felt inspiring and like we were all part of something special!

Then, the Pages called guests to make their way to the stage. And by that, I mean in a very orderly fashion, first calling guests with letters and then numbers.

Each group entered an elevator to take them to Studio 8H. As we exited the elevator, we walked through a hallway with photos of iconic SNL moments. It was awesome!

When we got into the studio, we were seated in the center section about 2/3 up. The chairs were really comfortable.

A comedian came out and gave us some brief instructions and pumped us up. He asked a lot of questions to the audience, so it was fun to hear peoples’ answers.

This part wrapped up when the band came out and played an upbeat song. 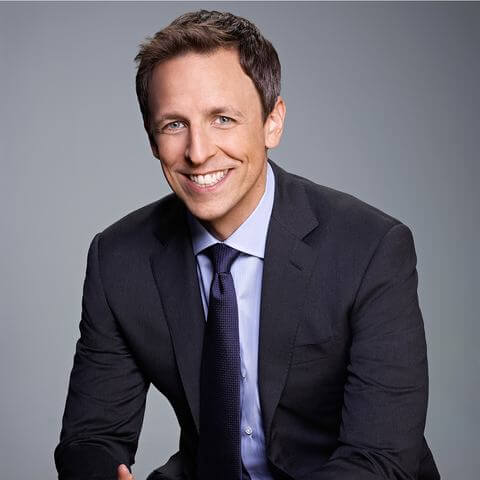 Since we couldn’t take photos inside, here’s a photo of Seth Meyers! Photo credit: NBC Studios

Then, Seth Meyers came out one minute before the show to thank us all for being there. He joked about the band (and musical mistakes they may or may not have made in the past) before running backstage to make his TV show entrance.

The band played the opening song and we all cheered as loudly as we could. Seth Meyers read his monologue. Then Tracie Ellis Ross (from Blackish) came out in an amazing headband. They filmed some promo spots together.

The next guest was Cameron Monaghan (from Shameless and Gotham.) It all went by so quickly.

Next, Seth Meyers came into the audience. He spent quite awhile answering tons of questions from the people off-camera. A lot of questions were about his two little kids. It all felt so genuine and personal. It was my favorite part!

Then, it was back to his desk to film a short video for his parents, who won an award. Then Joe Pera (from Adult Swim) came out to promote his new show. It was hysterical and even features one of the cameramen from Seth Meyers!

At the end, Seth Meyers quickly thanked the audience for being there. Then, we were dismissed by row to exit the back of the stage. We weren’t allowed to take photos as we left the studio.

Then, we walked through the waiting area and like any tour, we ended at the gift shop. They offered us 10% off coupons, which we took full advantage of!

For TV addicts like us, the NBC Studios gift shop was pretty amazing. They had a whole Friends section, tons of SNL stuff, items from This is Us (cue tears of joy) and so many other shows. Oh and Parks & Recreation stuff! They also had photo ops for The Today Show and The Voice. 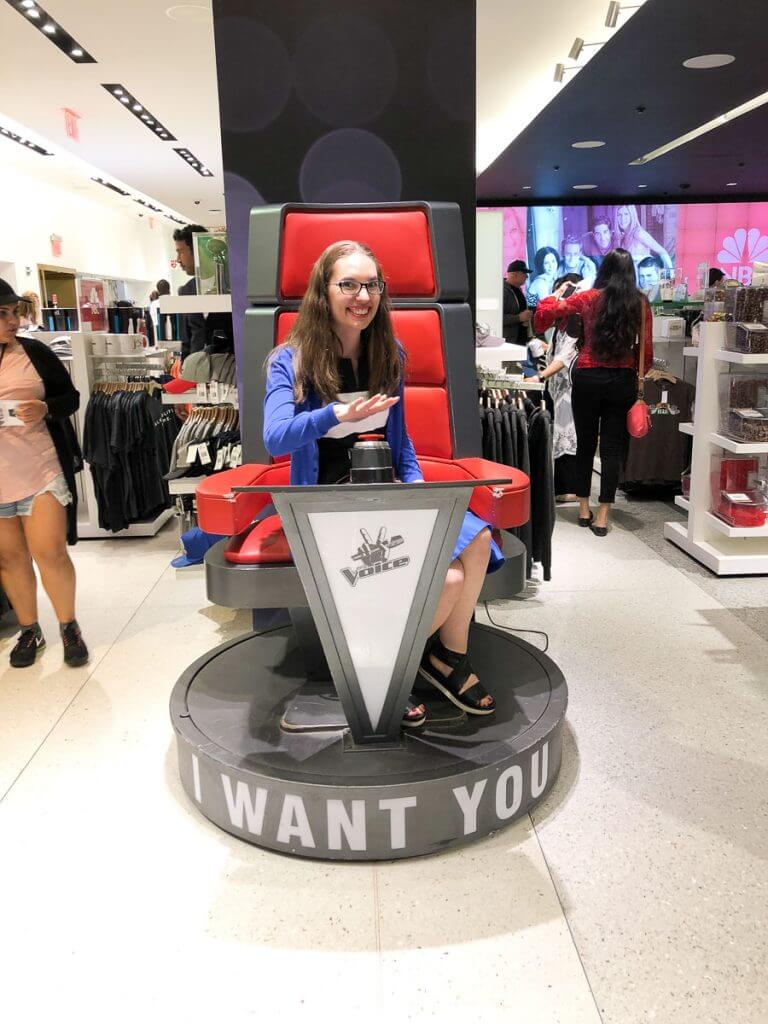 I couldn’t pass up this photo op at the NBC Studios store!

Were Late Night with Seth Meyers Tickets Worth Our Time?

Um, TOTALLY! I will say, my husband and I had so much more fun than at the Late Late Show! The staff here were so friendly and chill.

The whole experience was so organized, smooth, and comfortable. The Pages didn’t bombard us with instructions on how to clap or talk down to us or anything. In fact, there weren’t many instructions at all.

It was all about having a unique experience in New York City.

In hindsight, I wish I wouldn’t have stressed out about what to wear. I saw people fully dressed to the nines, while others were in shorts, and one woman was wearing a shark dress that was practically a costume. The studio was cold, so I’m glad I brought a sweater with me.

Things to do at Rockefeller Center

If you score free tickets to The Late Night with Seth Meyers, why not make a day of it? I found a few cool tours that you can do before the Seth Meyers taping that sound really fun: 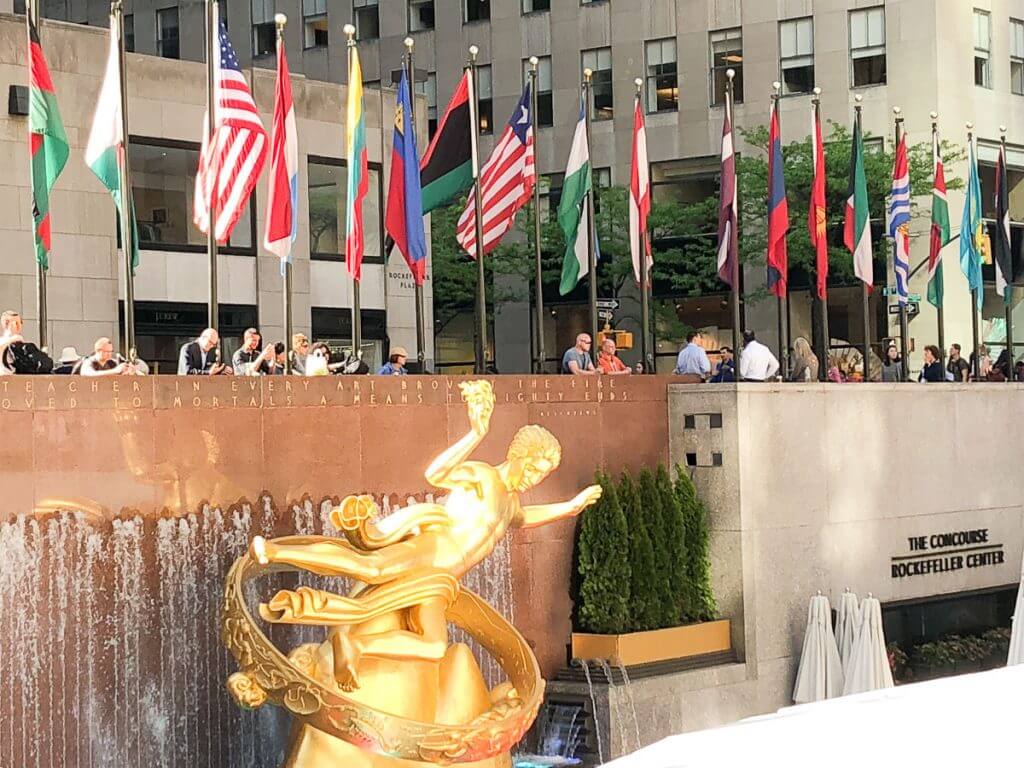 The fountain in front of Rockefeller Center.

This is a one-hour guided tour of the famous Rockefeller Center in New York City. You’ll learn about the cultural and artistic aspects of the building itself. Plus, get to know about its owner, John D. Rockefeller Jr.

TOP OF THE ROCK OBSERVATION DECK

This is the tour we didn’t have time to do. You can see the sets of Saturday Night Live and The Today Show. They even let you film your own TV segment. And you can check out Radio City Music Hall.

Plus, you’ll see Tiffany’s from Breakfast at Tiffany’s, the famous fountain from Friends, 21 Club from Wall Street, and the the Seinfeld “Soup Nazi” stand, among many others.

Exploring New York City during the holidays sound magical! This is a one-hour walking tour that includes seeing the giant ornaments of 6th Avenue, the toy soldiers and towering tree of Rockefeller Center.

What Else to do in NYC 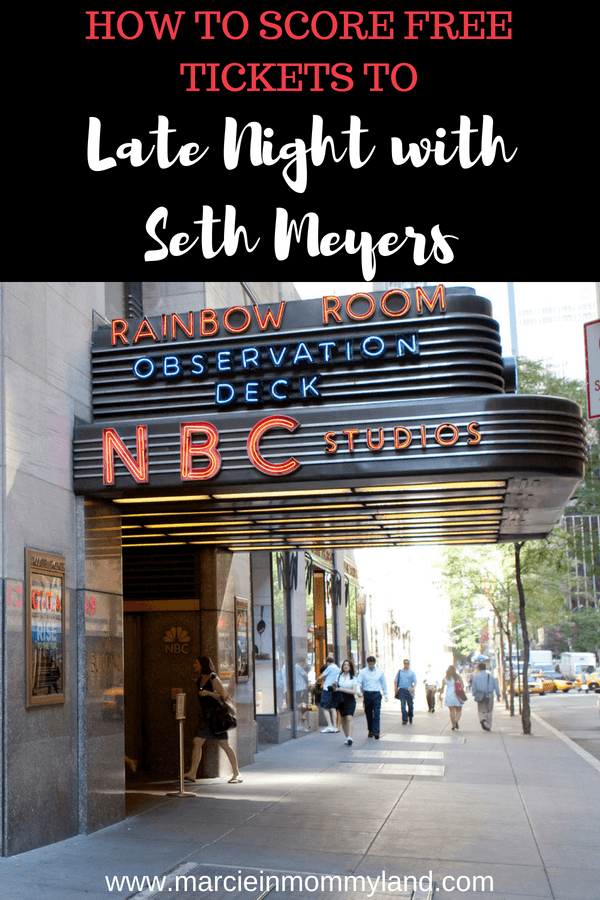 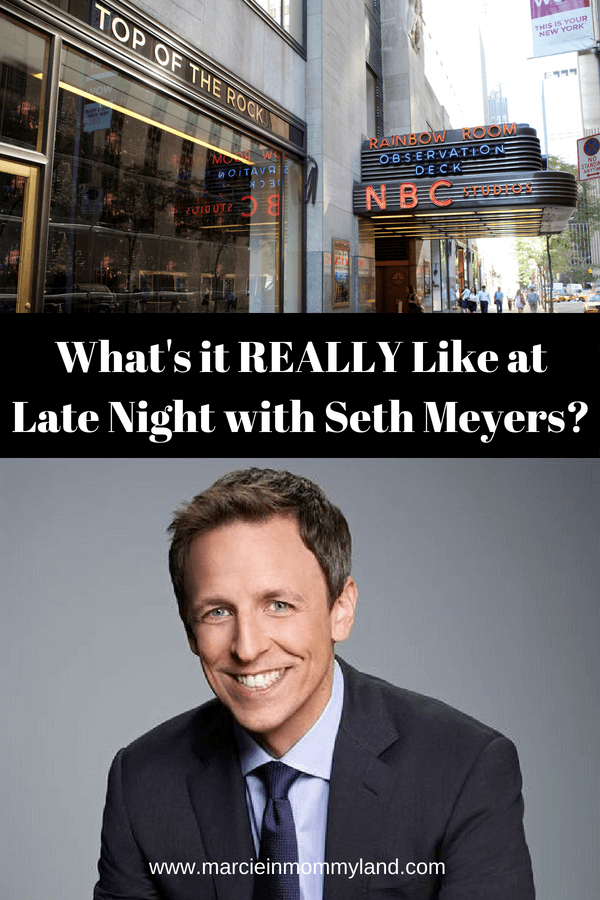 I would love to get my hands on some free tickets, the next time I can. Seems like you had a lot of fun.

We really enjoyed the whole experience! Plus, you can't beat the price :)

That sounds so awesome! The next time we're in New York City, I would definitely love to try to get tickets to see him. Thanks for sharing.

I can't believe the tickets are FREE! Such a fun experience!

Omg this sounds like an amazing opportunity! I would love to do something like this! I'm headed to New York in a week and I'm definitely checking this out.

Oh fun! Have the best time ever!

I love going to live shows and would love to go to see Seth Meyers one day. I'm glad you were able to get tickets.

I literally squealed when I saw they were confirmed :)

Oh my gosh, I'm a Seth Meyers fan all the way. I bet this was a memorable occasion. I'd love to get tickets to see him (free).

Yes! Seriously one of the best free things to do in NYC!