Living in Seattle, I usually take my kids to the Woodland Park Zoo. Or we visit the Point Defiance Zoo & Aquarium in Tacoma. However, I’ve been hearing people rave about the Oregon Zoo in Portland, Oregon for years.

Last year, we came down to Portland with friends who also had a toddler (read my toddler guide to Portland.) We knew that the Oregon Zoo had a train that was under construction.

We decided to skip the Oregon Zoo last year with the purpose of returning this year primarily for the zoo train.

I have to say, the Oregon Zoo has been my best zoo experience to date. The layout reminded me a bit of Northwest Trek in Eatonville, WA.

It was easy to walk around the entire place with a stroller and 2 tired preschoolers. The adults and kids in our group had a great time!

I have to start off by saying I saw a Black Rhino for the first time in my life. I know a trip to the zoo isn’t usually about the parents, but I was thrilled. 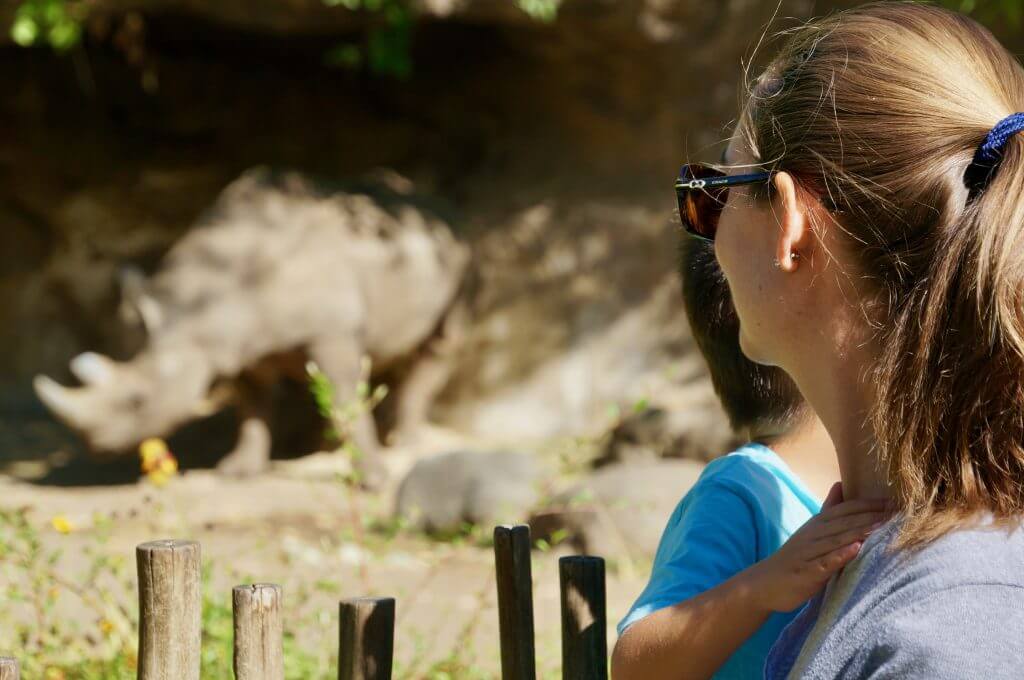 I’m in awe of seeing a Rhino up close for the first time in my life! Photo credit: Darren Cheung

In fact, I saw TWO Rhinos! Their names are Zuri and Ruka. They are an endangered animal and the zoo hopes they will breed.

It’s as close to Africa as I’m getting these next few years. I savored every moment. 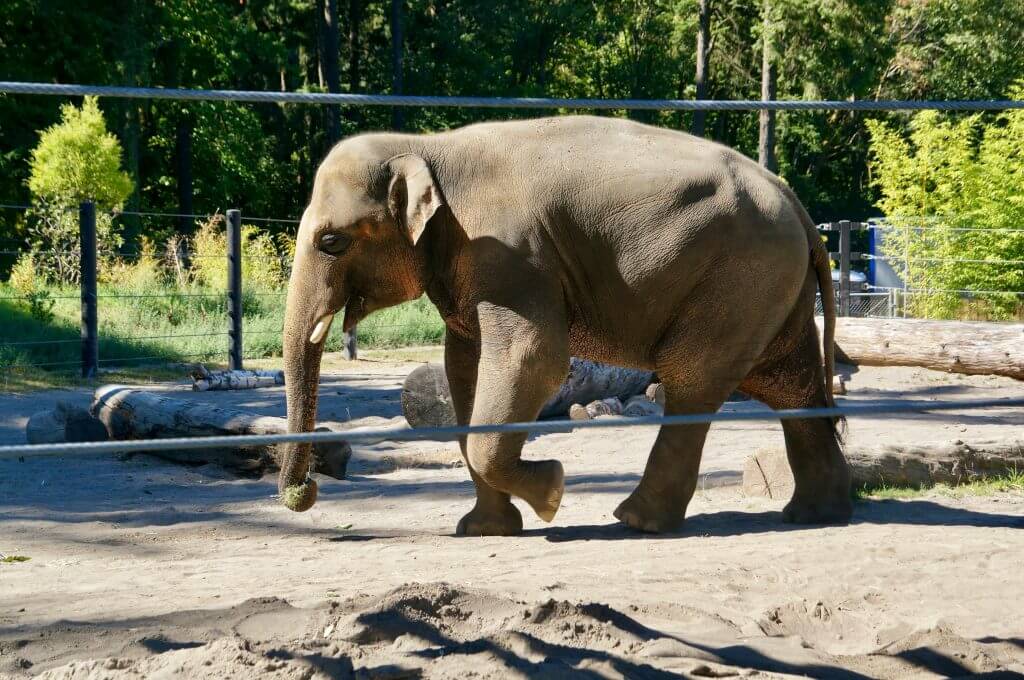 We were seriously close to the elephants! Photo credit: Marcie Cheung

They also have an incredible Elephant Lands exhibit area. There are currently 5 elephants who reside her. The elephants can roam around throughout different exhibit areas.

Throughout this habitat, feeding stations, mud wallows, and water features encourage the elephants to be active 14-16 hours a day. This replicates how they would live in their natural environment.

The elephant exhibit at the Woodland Park Zoo in Seattle closed recently, so this was really special for our family. 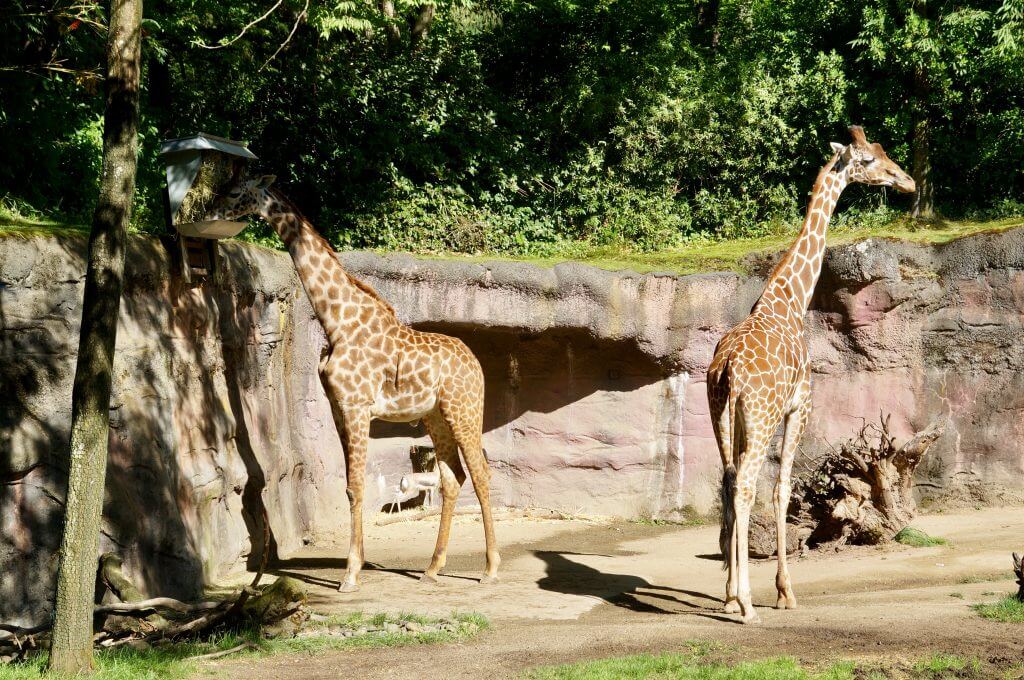 We arrived at the giraffes right as they were munching on their lunch. Photo credit: Marcie Cheung

One of my favorite animals is the giraffe. I couldn’t believe how close we were able to get to Desi and Buttercup.

In fact, that’s what I noticed most about the Oregon Zoo. All the animals seemed so close to guests. 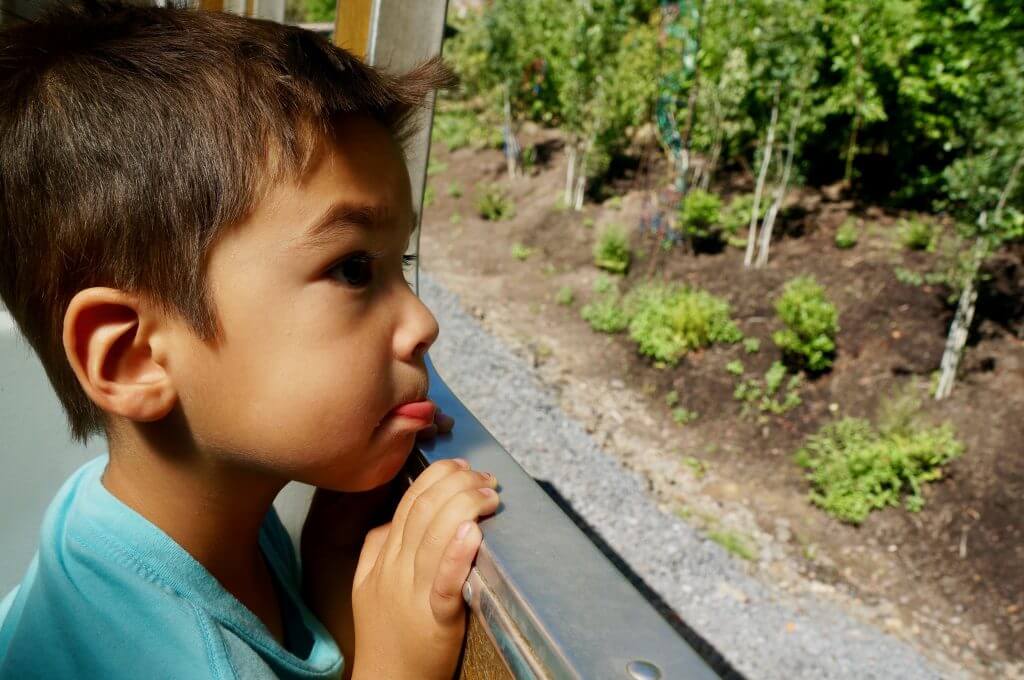 The Washington Park and Zoo Railway train re-opened this year and the route is much shorter than before. It was laughable how short it was. My friend and I actually laughed out loud because it’s 6 minutes long.

It takes you from the station to the elephants and then pulls a u-turn and comes right back.

But, I asked my 3.5-year-old what he thought and he told me it was a long ride. So, it might be the perfect length for preschoolers. 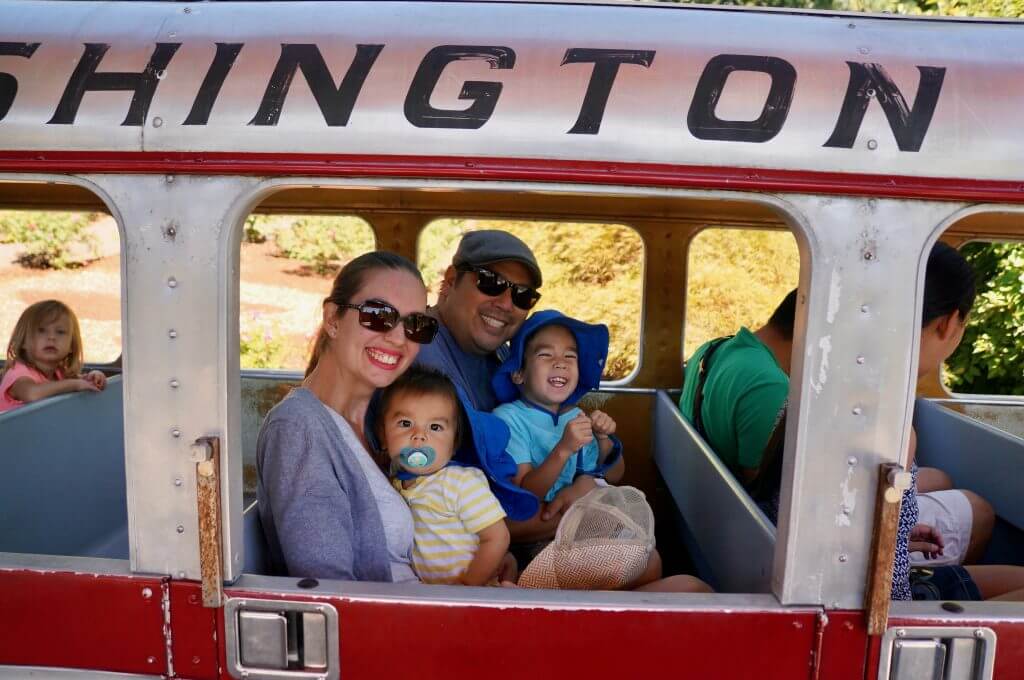 We didn’t ride this carousel so I have no first-hand experience to share with you.

However, I think it would be a highlight for a lot of families. The line was a bit long and the price was a bit steep at $3 a rider. But, only seated riders have to pay (meaning parents holding young kids are free.)

Had it not been the end of the day, we probably would have stopped.

What Sets the Oregon Zoo Apart

What stands out in my mind the most about the Oregon Zoo is that I’d consider it a relaxing family adventure. We got there when the zoo opened at 9:30am and there was a swarm of people. 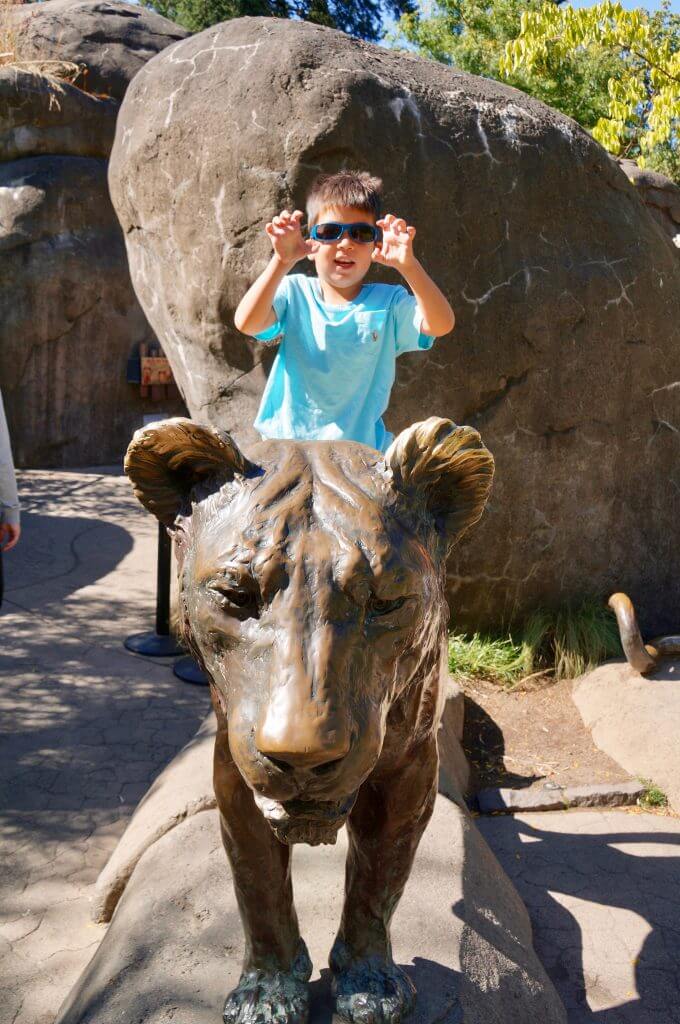 My son humored me with this fun photo op! Photo credit: Marcie Cheung

However, as soon as we entered the zoo, the crowds dissipated and it felt like we were on a VIP tour. Unlike many zoo experiences, the exhibit areas felt spread out and we enjoyed walking through nature.

What’s Coming Up at the Oregon Zoo

The Oregon Zoo is undergoing some expansion plans in the near future. I’m most excited for the Rhino area. As part of a bond project, the zoo’s black rhino habitat will be expanded beginning in 2018. 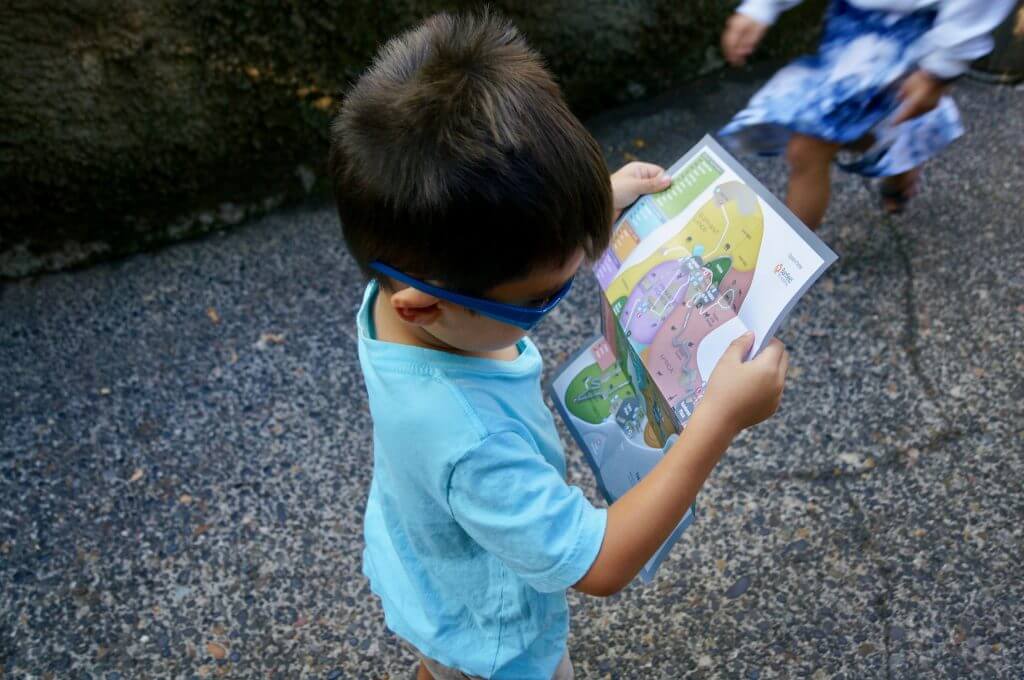 We love teaching navigation with Zoo maps because of all the pictures. Photo credit: Marcie Cheung

The hippos at the Oregon Zoo will head to another zoo. Their pool area will be added to the rhino habitat by 2020.

According to their website, eventually other savanna species will join the rhinos to create a multi-species savanna habitat. I really appreciate multi-species habitats, so we will be back in a few years to check it out.

We also heard from zoo staff that there are plans to pull the warm air from the polar bear area and blow it into the Elephant Lands area to be more sustainable.

The new Polar Passage exhibit area is set to debut next year. This expansive, two-tiered habitat will include natural ground materials, shallow and deep pools and extraordinary viewing opportunities for visitors.

Like the Elephant Lands design, polar bears will be able to patrol their habitat as they would in the wild and take in views across the zoo.

6 Tips for Parents with Preschoolers 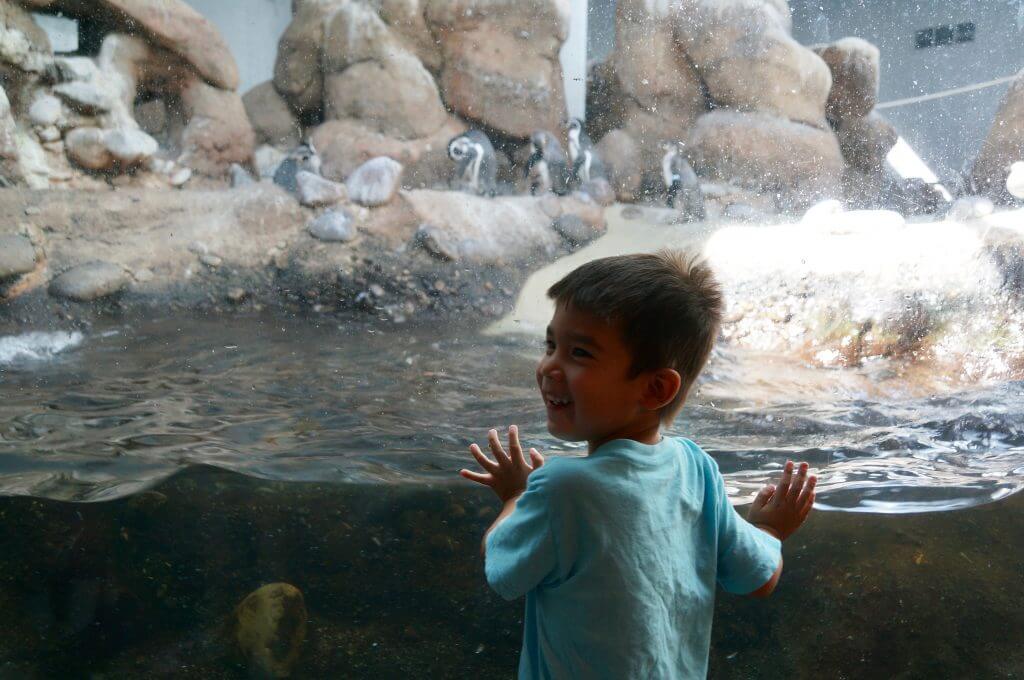 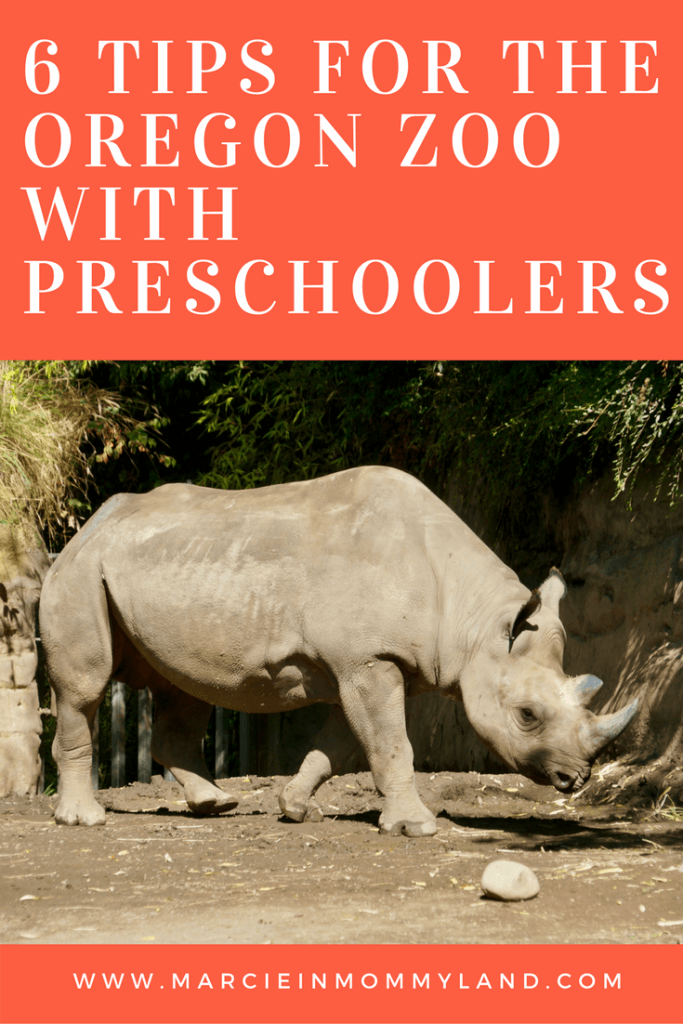 Looks like you all had a great time. I haven't been to a zoo for many years now, but I have been planning to take the grandkids when they got a little older. Maybe this will help us to make the trip sooner.

Wow! What a great article about the Portland zoo. It's been a while since I went last (the train was operational) if that tells you how long it's been. I agree that it is the best of the Northwest zoos. We loved the Elephants. Your article inspired me to go back. I think I'll wait for the zoo lights though. Of the three, their winter zoo lights are also the best. Thank you for the article.

Yay! Glad I inspired you! Good to know about their winter zoo lights! We saw some of their lights up near the train, but I'm curious what the do with the rest of the zoo. Hmmm. Maybe I need to plan a trip next month :)

So much fun! My 6 youngest cousins and I go to a zoo every year and these tips are lifesaving! I’m saving this post for when I have little ones of my own!

What a fun family tradition!

I used to not like Zoo but looking at your blog post makes me remind my first time going to one and I loved it! Thanks for sharing.

They are much more fun when going with kids who have never seen the animals!

We had a blast!