The show comes to Seattle from the Unicorn Theatre in London, which is the UK’s leading theatre for young audiences. May contain affiliate links.

The Velveteen Rabbit is a classic British tale of a toy rabbit who wants nothing more than to become “real.”

He’s given as a Christmas gift to a little boy who loves him for all of two hours before tossing him to the side for other toys. Super relatable, right parents?

He lives a lonely life in the nursery playroom where he talks to the other toys, but many are mean to him. However, the oldest toy, the Skin Horse, is kind and tells him all about the magic of becoming “real.”

This famous quote from the book is often used in wedding ceremonies:

“You become. It takes a long time. That’s why it doesn’t happen often to people who break easily, or have sharp edges, or who have to be carefully kept.

Generally, by the time you are Real, most of your hair has been loved off, and your eyes drop out and you get loose in the joints and very shabby.

But these things don’t matter at all, because once you are Real you can’t be ugly, except to people who don’t understand.” –Skin Horse

One night, Nana gives him to the boy at bedtime and the two of them become inseparable. 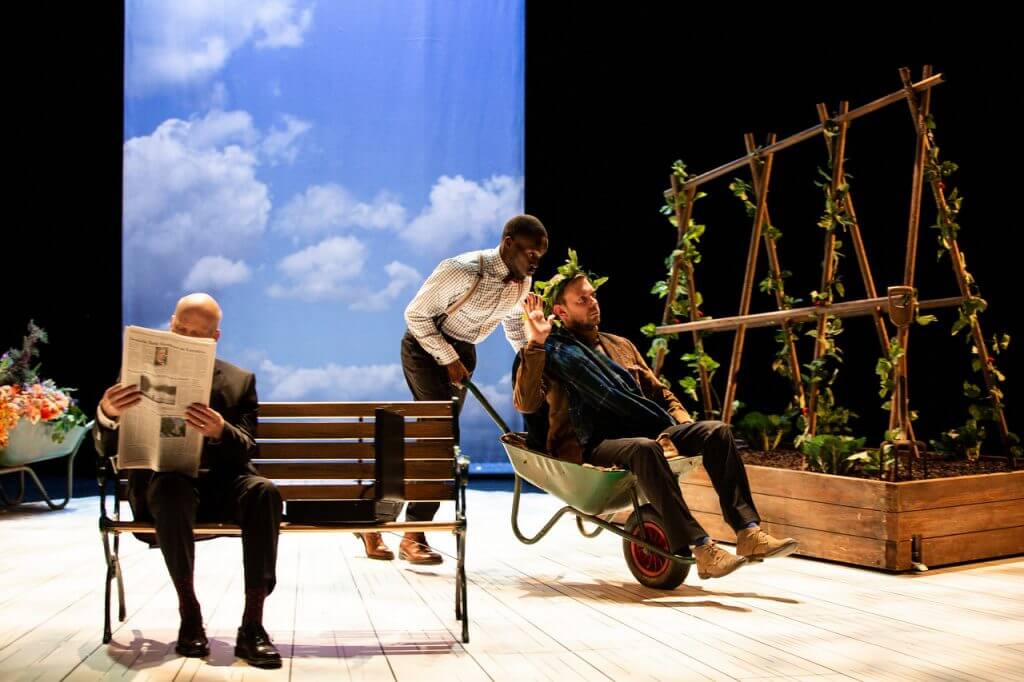 They spend all their time together on imaginary adventures in the nursery and out in the garden. The boy loves the rabbit so much that his fur begins to come off and the color rubs off his nose.

But, even though the boy calls him “real,” he finds out that he’s not after some real rabbits ask him to play. This makes him feel sad.

After the boy comes down with scarlet fever, the Velveteen Rabbit is tossed in a pile of other toys and books to be burned to get rid of the sickness.

He ends up looking back on his life with the boy and feeling sad about everything. He’s so sad that he sheds a tear.

Then, a flower grows where the tear lands and a little fairy pops out and uses her magic to make him real. He hops along with the other rabbits and comes to visit the little boy.

What My Family Thought of the Show

I grew up reading The Velveteen Rabbit at home and in school. It’s a classic story and I was curious to see how they were going to stretch the book into a 90 minute production. 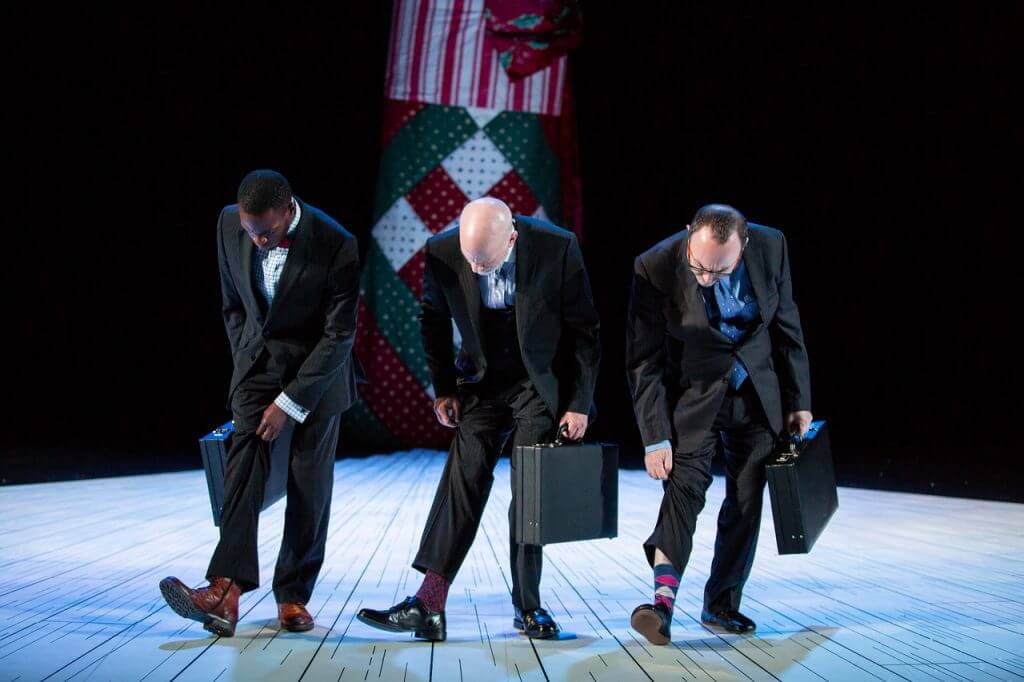 It started off with 3 men in business suits waiting with briefcases on stage. They stood in complete silence for quite awhile and looked at their socks.

After a few minutes, the Velveteen Rabbit makes his first appearance. He kind of looks like a history teacher, wearing a brown velvet sport coat and pants.

We attended with an almost 5 year old and a newly 2 year old. My toddler lasted maybe 2 minutes before he started crying and had to be taken to the quiet room.

My oldest was able to sit through the whole production, but he had a hard time following the story or understanding what the characters were doing.

The sets are really cool!

For the nursery, they fill the stage with oversized toys, including a train that magically chugs on and off the stage!

In the bedroom, the bed is massive and is inclined so the audience can see everything happening around it.

And in the garden, there’s a full garden and a real swing!

What’s extra amazing is that each set features props that are multi-use. Many times they transform into something else or are hiding additional props. 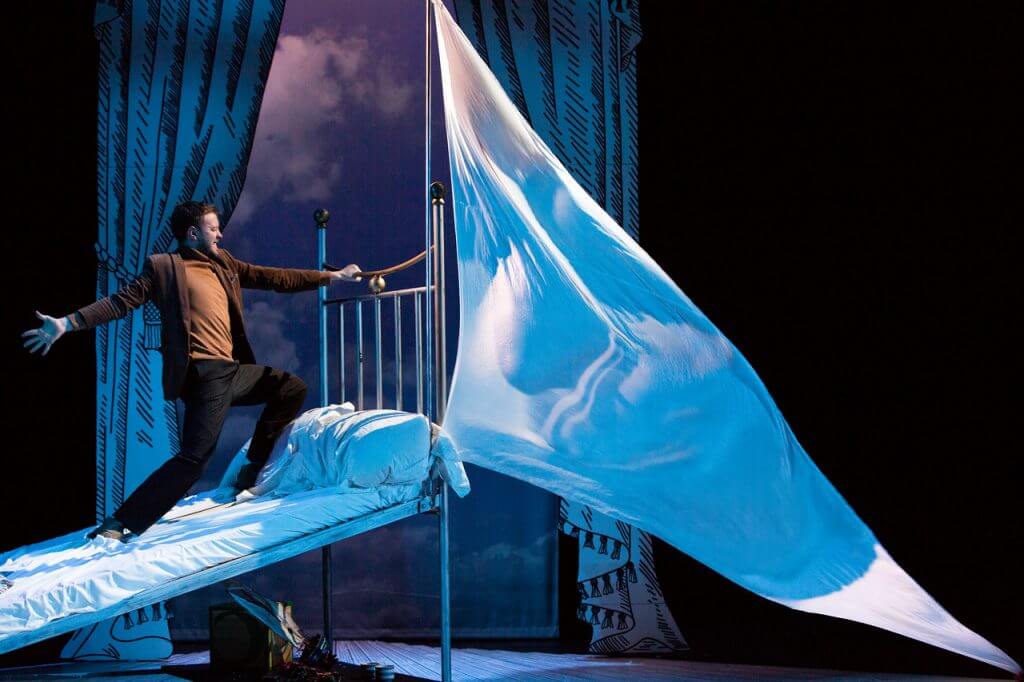 Our favorite was the bed. Each bedpost seemed to hide a sword or a flag or a ship’s sail. And there were all kinds of interesting items hidden beneath it.

The toys were also pretty cool! I mean, there’s an adult-size rocking horse!

And at one point, we watch two grown men bounce on balls around the stage and it’s hilarious!

Oh and there’s SNOW! That was a big hit with the whole audience!

There are 4 men on stage. One is the musician (Jason Carr), and the other three are actors. 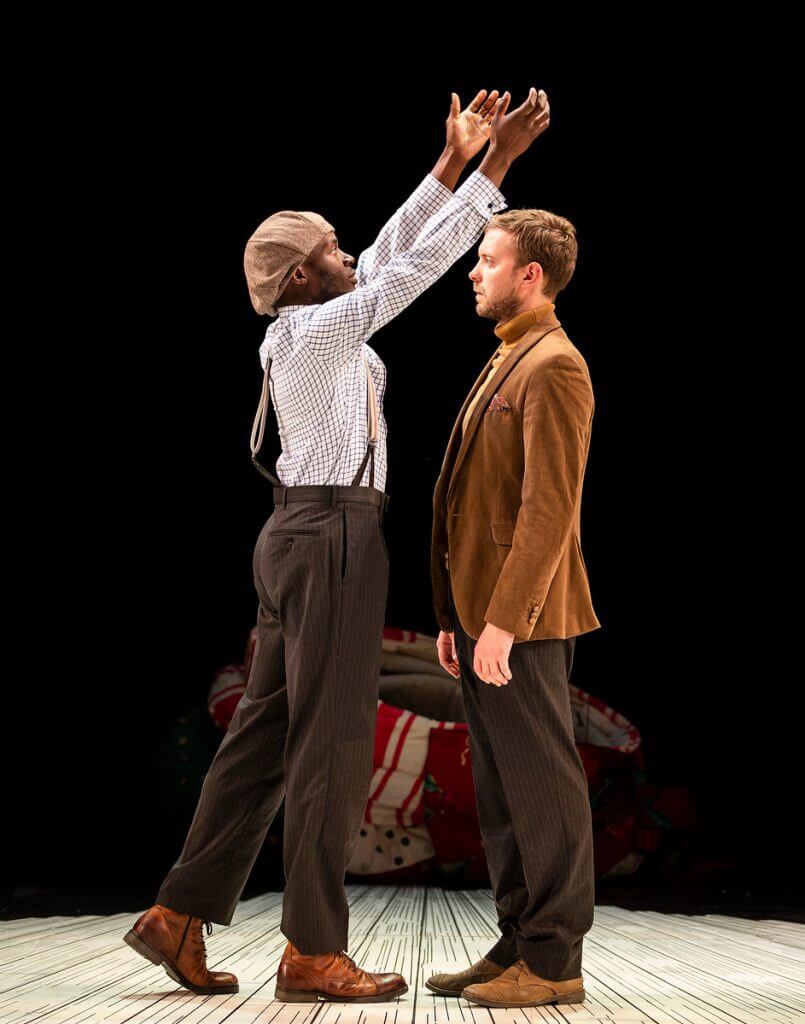 There’s the boy (played by Ashley Byam), the Velveteen Rabbit (played by Christian Roe), and the narrator/doctor/Nana (played by Peter Crook.)

We really enjoyed seeing the narrator switch characters throughout the show, most notably as Nana. It’s amazing how a man in a suit can transform into a nanny with just an apron and a hat!

It definitely had one of the more interesting after show talks that we’ve been to. The kids asked a lot of poignant questions and it was interesting to hear how the actors worked on the show in the U.K. and toured around Europe first before heading to the U.S.

I think this was the most “artsy” theatrical performance we’ve taken our kids to. It moved at a slower pace than I expected, which is hard for little ones.

Had my kids been older, I think they might have enjoyed it a bit more.

I thought it had high artistic value and it almost felt like we were watching a foreign film.

What Parents Need to Know:

READ THE BOOK BEFORE THE SHOW

My biggest mistake was not reading the book to my kids before we went to the show. While I was familiar with the story, my boys weren’t.

They were pretty confused the whole time and I think it would have been easier if they were familiar with the story.

SCT sells the book in their gift shop, so it might be worth grabbing a copy before the show to read to your kids while you wait for the doors to open.

According to Seattle Children’s Theatre, the show is designed for kids ages 5 and older.

Personally, I’d say it’s geared more toward 7 or 8 year olds. There are a lot of silent pauses and time for the audience to contemplate the scene.

My almost 5 year old used that time to ask me approximately 75 questions about what was happening on stage.

The show is 90 minutes long with one intermission.

IT’S NOT A MUSICAL

While the show has a bit of music, it’s definitely not a musical. It’s a play with movement.

I’m loving the cute photo area that Seattle Children’s Theatre has been doing with their productions! 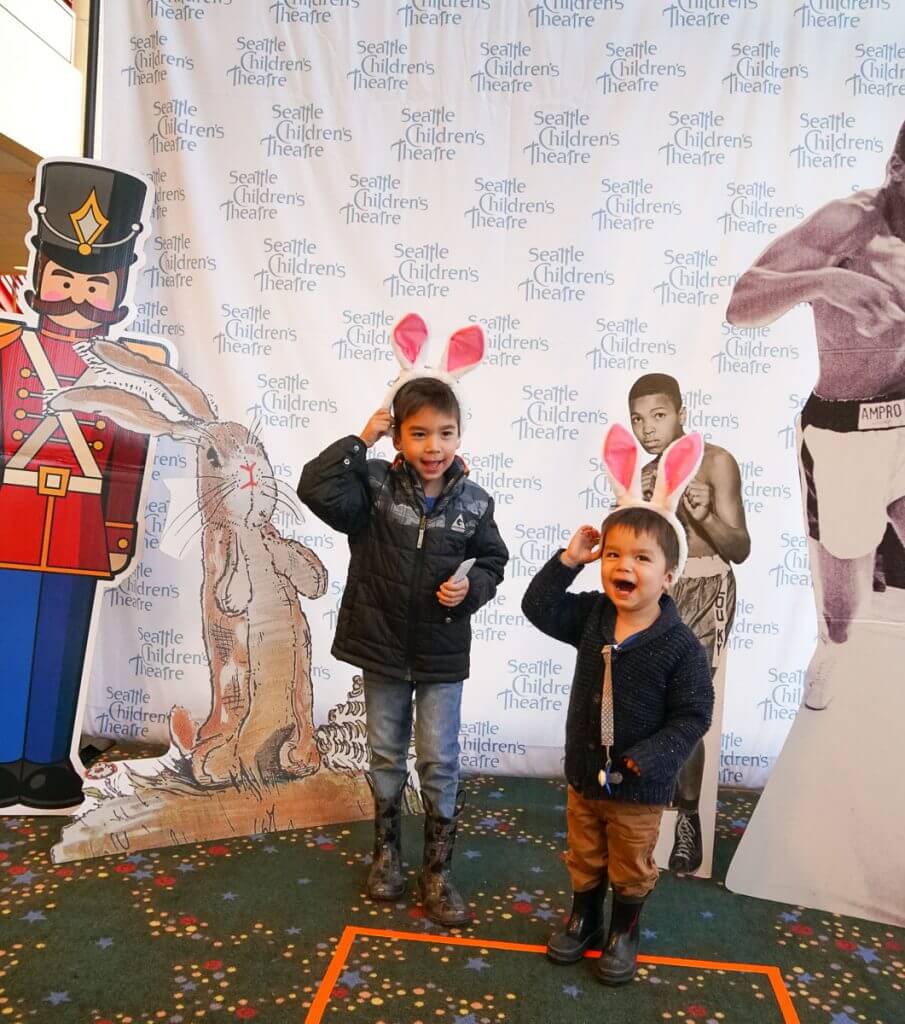 The kids always humor me with photos at the Photo Booth area! Photo credit: Marcie Cheung

This one has signs and bunny ears for props and it’s super cute!

We also noticed they had a table with crafts for kids to do before the show or during intermission. 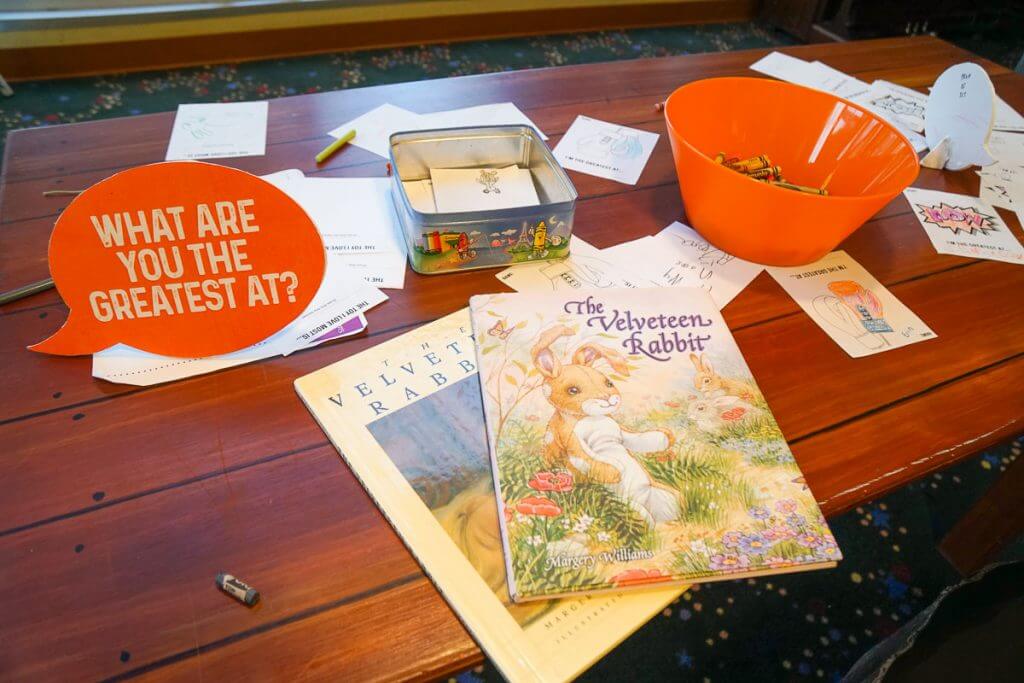 This table in the lobby is sure to keep kids busy before the doors open. Photo credit: Marcie Cheung

Since And In This Corner: Cassius Clay is still going on, there was a mix of activities! Plus, copies of The Velveteen Rabbit to familiarize yourself before the show.

If you or your kids are allergic to feathers, be warned there’s a pillow fight where feathers fly all over the stage.

THE VELVETEEN RABBIT DOES NOT WEAR EARS

My oldest kept asking me why the rabbit didn’t have rabbit ears. The character is dressed like a man wearing a sport coat.

This show is very quiet, so if you’re worried your kids might make noise, sit closer to the back so you can easily head to the Quiet Room upstairs.

I’m a huge fan of the SCT Gift Shop! They have the cutest stuff! They had a whole area dedicated to The Velveteen Rabbit with some unique gift items. 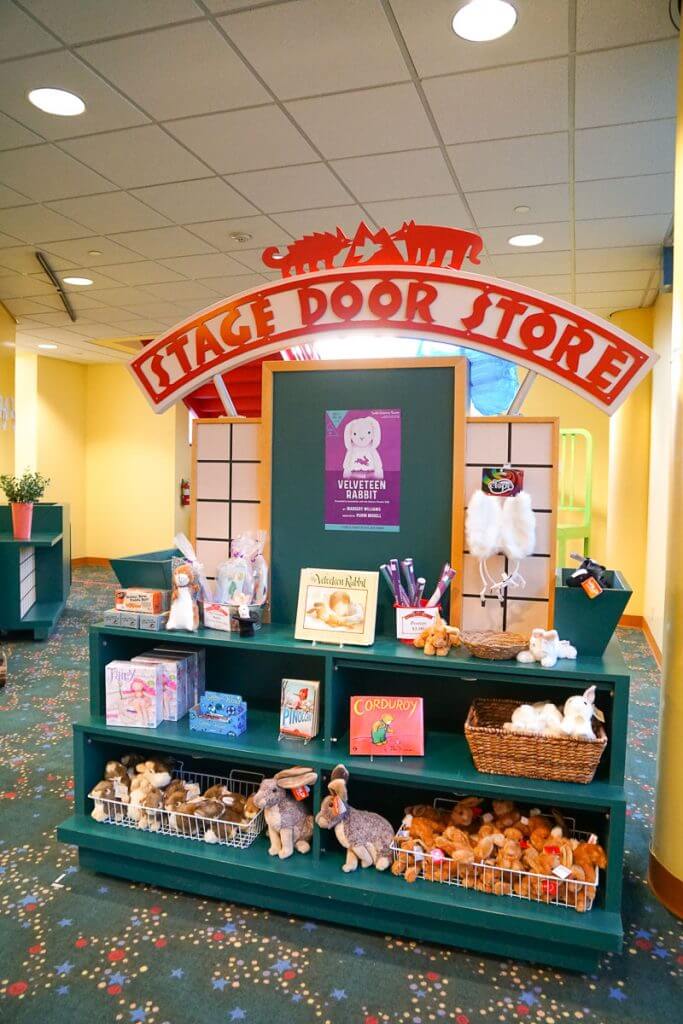 How to Get Velveteen Rabbit Tickets

Seattle Children’s Theatre provided me with press tickets. All opinions are my own.

How Kid-Friendly is the Seattle MoPOP Museum?
6 Tips for Enjoying the Pacific Science Center with Toddlers
7 Tips for the Seattle Children’s Museum
6 Reasons Your Kid Should Ride Seattle’s Monorail

Growing up as a school girl "The Velveteen Rabbit" was my favorite book. When I because a parent I couldn't wait to introduce the story to my own little ones. I'd love to visit this live production. I wish I lived closer.

The Velveteen Rabbit holds a special place in my heart. I would love to see it this beautiful story live and in person. I hope it comes my way.

I hope so too! It's an interesting story!

This is the first time I learn about this theatrical play and I like it. Am not a kid anymore but definitely the story captivates me.

It's a timeless tale!

The Velveteen Rabbit holds such a sweet place in my heart. It gives me warm-fuzzies as I think back on reading it as a child.

I know, right? Toys can be so special :)

The Velveteen Rabbit is such a classic story, and one that endures the test of time. Thanks for sharing this. I always loved taking my kids to live shows when they were young.

Yes! We've been taking our kids to live shows as soon as they could sit through them!