The Story of The Little Prince

Possibly set in the 1930s, a pilot crashes his plane into the Sahara Desert in Africa. While trying to fix his airplane, he comes across a little man (the Little Prince) dressed in green who is from an asteroid out in space. He tells the pilot about a beautiful rose that he left behind so he could journey across the galaxy. As the little man tells his tales, the pilot is slowly drawn into a world filled with imaginative thinking and strong friendships.

Seattle Children’s Theatre’s Official Synopsis: “In the middle of the Sahara Desert, a stranded aviator meets the Little Prince, a young boy from a small, faraway asteroid, and a dreamlike journey unfolds across a universe. A rose, a sheep, and an array of unusual adults on their own small planets spark wonder in Artistic Director Courtney Sale’s SCT directorial debut. Adapted from Antoine de Saint-Exupéry’s classic novella, this treasured tale reminds us of the power of innocence and boundless love.”

I’m a child of the 80s and I distinctly remember watching The Little Prince on TV.

We didn’t get to watch much TV growing up, but I remember that being one on the “approved” list. I remember it being a show that felt special in some way.

Later when I was in my college French class, I read Le Petite Prince en français and it brought back all the feels!

I tried watching the movie version a couple of years ago with my then-toddler. But, it just didn’t have the magic I remembered.

I was very curious to see how this Seattle Children’s Theatre version would measure up against the book.

What My Preschooler Thought of The Show 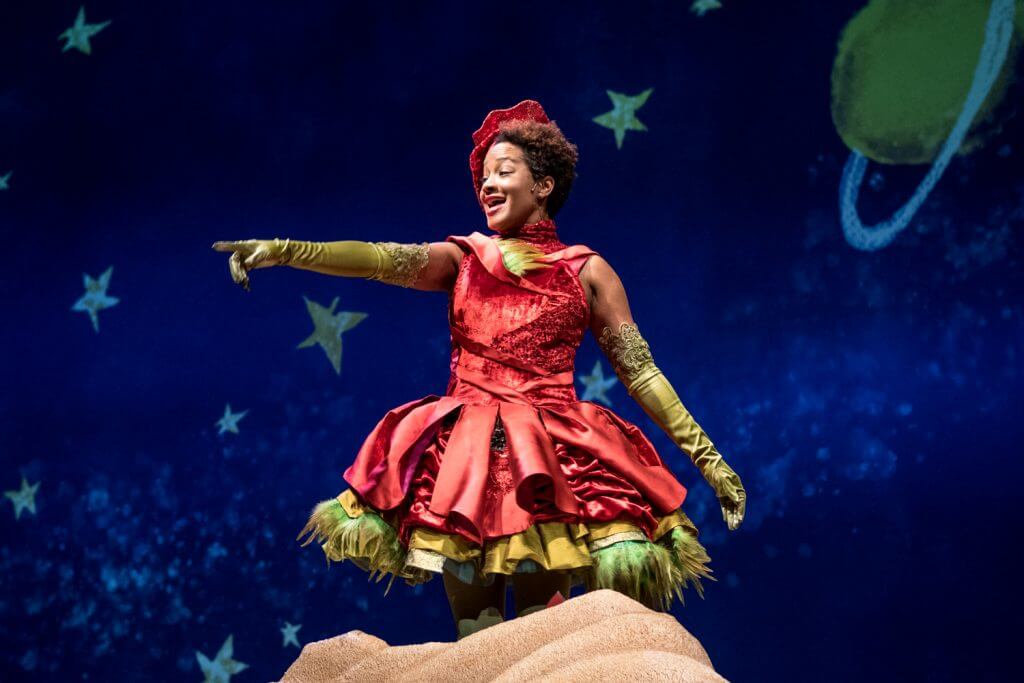 The Rose was brought to life by Dedra D Woods in the Seattle Children’s Theatre production of The Little Prince. Photo credit: Elise Bakketun

This show is geared for kids ages 6 and older. I think it’s because of the length of the show. I brought my 4-year-old and crossed my fingers it would be okay. Thankfully, he really liked it!

In addition to actors on the stage, Seattle Children’s Theatre uses animation to tell the story of The Little Prince.

As soon as the aviator starts drawing the snake who ate the elephant, this world drew in my preschooler. And they use shadow puppets to show the little prince trekking around Earth.

My preschooler’s favorite part of the show was seeing the snake, “even though it wasn’t a real snake” because he thought it was funny. He thought the parts with the snake were scary, but not too scary for him.

He told me later that he also liked the part with the fox because “she wrapped her tail around me after the show.”

The only part that was a bit confusing for my preschooler is that all the actors, besides the aviator, were women. So, he asked about “the little princess” and wanted to know why they called her a “little man.”

My son is at an age where he’s trying to categorize people. We ended up calling the little prince a “she” most of the show and he was very excited to meet “her” afterwards.

What I Thought of The Little Prince as a Parent

I thoroughly enjoyed it! It was pure, well-executed and gave me all the feels. The overall story played well for kids, yet had a deeper level for adults.

Seeing the planet with the accountant who is so focused on counting all the stars hit home. He was unable to appreciate the stars because he was so busy.

And the planet with the conceited man also felt very 2018! It was a great way to show how we all live in our own bubbles.

The comedy was also on point. While I wouldn’t consider this a “funny” play, it definitely had it’s moments. I genuinely chuckled at a few of the Fox’s lines and delivery. 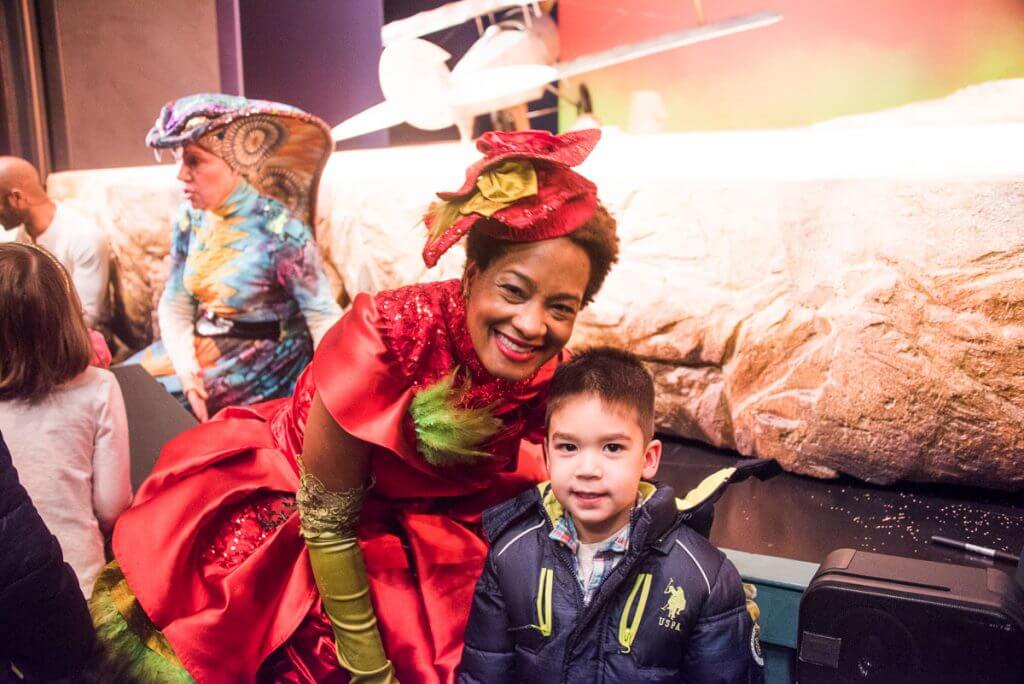 Loneliness was another strong emotion. When it becomes clear that the Little Prince is willing to sacrifice his life in order to reconnect with his beloved Rose, I actually teared up a bit. This caught me off guard.

While this is considered a children’s show, quite a few young couples without kids were in the audience. Because of the layers to this show, it would make a nice date night for couples who don’t mind a crowd full of families.

Here’s What to Know: 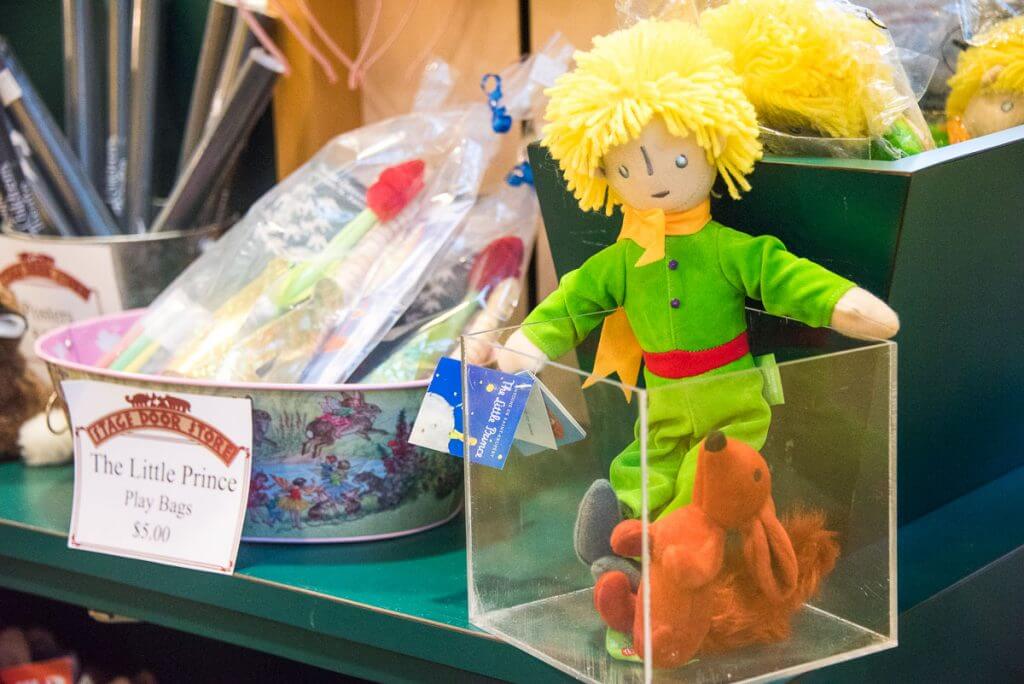 There is a small section of the gift shop dedicated to The Little Prince items. Photo credit: Marcie Cheung 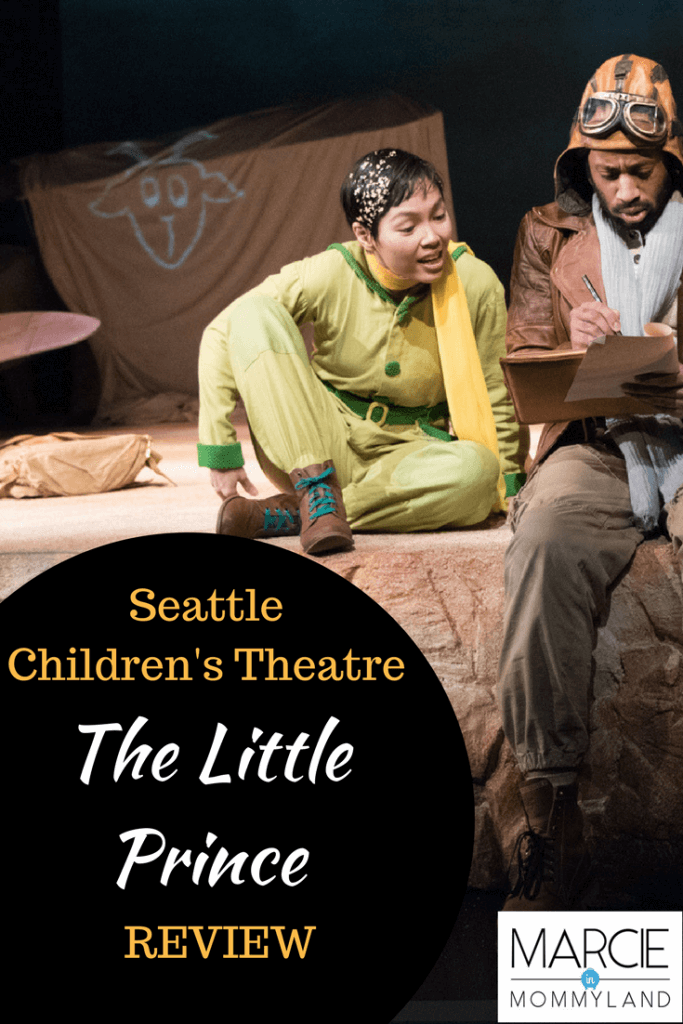 Seattle Children’s Theatre provided me with press tickets for review purposes. All opinions are my own.

I really loved this book as a child too. That said, I'd love to see this production, though a little out of my way! It sounds like a great play for children to enjoy too. A classic book, and a seemingly good show.

The show was really well done and felt very special!

Oh my goodness I would love to go and see this show. I hope my son enjoys things like this when he gets older. This is a great family bonding activity. And great job for exposing him to different types of story telling.

Yes, this is a wonderful type of storytelling!

Thank you so much for sharing this. I had no idea that it was playing and I think that my kids would love it.

I love taking my kids to the theater. Such a fun outing!

Yes, we made a whole evening of it and it was quite memorable!

Sounds lovely. We’ve never been to Seattle children’s theatre but I think the kids would love it - especially the shadow puppets since they are fascinated by puppets at the moment.

Yes, I thought the shadow puppets was a cool way to show how far the Little Prince had explored Earth.