The Lamp is the Moon

The Lamp is the Moon is a new works production at Seattle Children’s Theatre. Annelih GH Hamilton plays Shawn, a young girl who is supposed to be taking a nap, but can’t fall asleep. But, it’s not surprising. See, her grandmother gives her an old lamp right before nap time. This is frustrating to her because her mind is already ticking about all the possibilities of things she can do with her lamp. Her parents have already taken out the light bulb and cut the cord so its only function is to inspire creativity. It’s impossible to fall asleep when she has a lot of dreaming to do.

She spends the first few minutes of the show apologizing to her door for slamming it. And then for saying sorry too loudly. This resonated with me because it’s how my 4 year old reacts, especially when he’s excited about something. It instantly made the show feel real.

Magically, her lamp starts speaking to her! They start talking about how Shawn wants to be an astronaut when she grows up. For the rest of the show, they work together to create a game plan of how they can launch into space. Shawn and her lamp pepper in facts about astronomy, engineering, math and more.

What’s super cool about this production is that Annelih GH Hamilton basically does a one-woman show. Her parents are never seen and she plays the role of the grandmother behind a wall. And, the play takes place over an hour. That’s the same amount of time Shawn’s supposed to be napping, so it’s in real time. I may have geeked out over that! 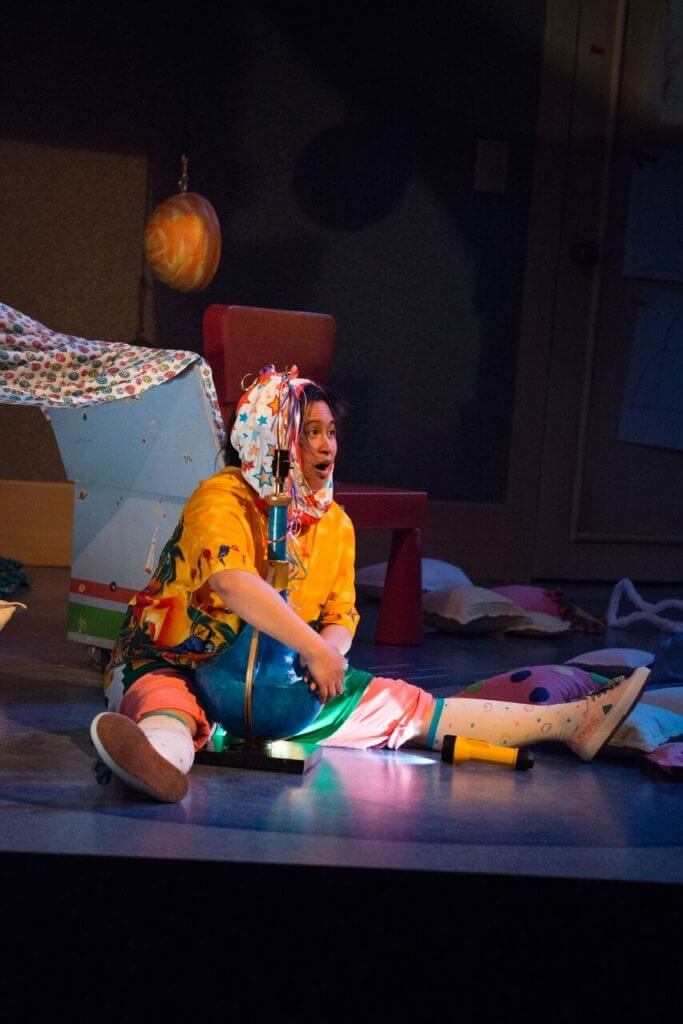 STEM Aspects of the Show

As I was watching The Lamp is the Moon, I couldn’t stop relating it to The Magic Schoolbus. If you remember that show from when you were a kid, or have seen the rebooted version on Netflix, the main purpose is to learn about science through wacky adventures. Mrs. Frizzle usually plants an idea into the children’s minds and they experience science first-hand.

When you look at Shawn’s room, she has this crazy contraption of planets hanging by pulleys. She uses this during the show to raise and lower planets. And she talks about coming up with a hypothesis and testing it using the pulleys.

I liked how Shawn looks around her room to find objects to represent items in space. The pillows become stars and she crinkles up colorful tissue paper to create planets. This is when the lamp becomes the moon.

Shining a flashlight on the lamp, she demonstrations the phases of the moon. Then, she invites the audience to stand up and slowly turn around to show day and night. It’s a great opportunity for kids to see a concept and then get a hands-on experience with it. 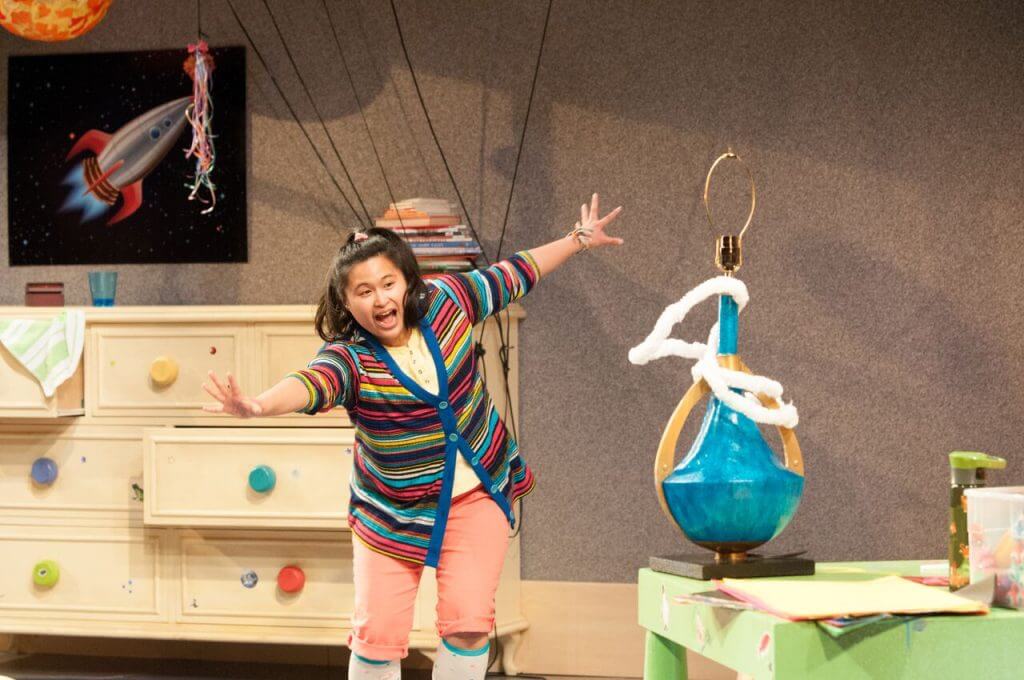 Annelih GH Hamilton uses the entire stage and makes the audience feel like they are also part of the set. Photo credit: Elise Bakketun

The Lamp is the Moon is filled with audience participation. One of my favorite activities is when Shawn uses the audience to become a world map. She points at different areas of the audience and tells them who the represent and gives them an action to do. People in Peru say “bien” and people in Antarctica pretend to be penguins. Then, she references this map throughout the production.

Kids also get the chance to move around a lot. My son’s favorite activity was pretending to dress up like an astronaut. Shawn encouraged the audience to put on their puffy pants and stomp their feet into their astronaut boots. The whole audience errupted in giggles and stomping feet!

A running theme of the show is that Shawn gets 3 warnings before her parents will give her “consequences” for not napping. Remember, this is nap time and she’s supposed to be sleeping. So, when the show gets a little too loud, you hear footsteps coming toward her room. Shawn will cross her fists, signaling that the audience needs to be very quiet so she won’t get a warning.

I have to take a moment to talk about the set, which was designed by Carol Wolfe Clay. Basically, is a child’s bedroom. But, everything is oversized enough to make Annelih GH Hamilton look like a preschooler. I loved how messy her room was, including piles of stuff on her table, pillows all over her room, and dresser drawers full of unfolded clothes.

This set reminded me a bit of Boo’s room from Monster’s Inc. She had lots of colorful furniture and handmade drawings. Her door was even slanted a bit. And oversized, of course!

There’s even a large version of the IKEA children’s table and chair! I’m impressed that Seattle Children’s Theatre was able to replicate it so exactly! 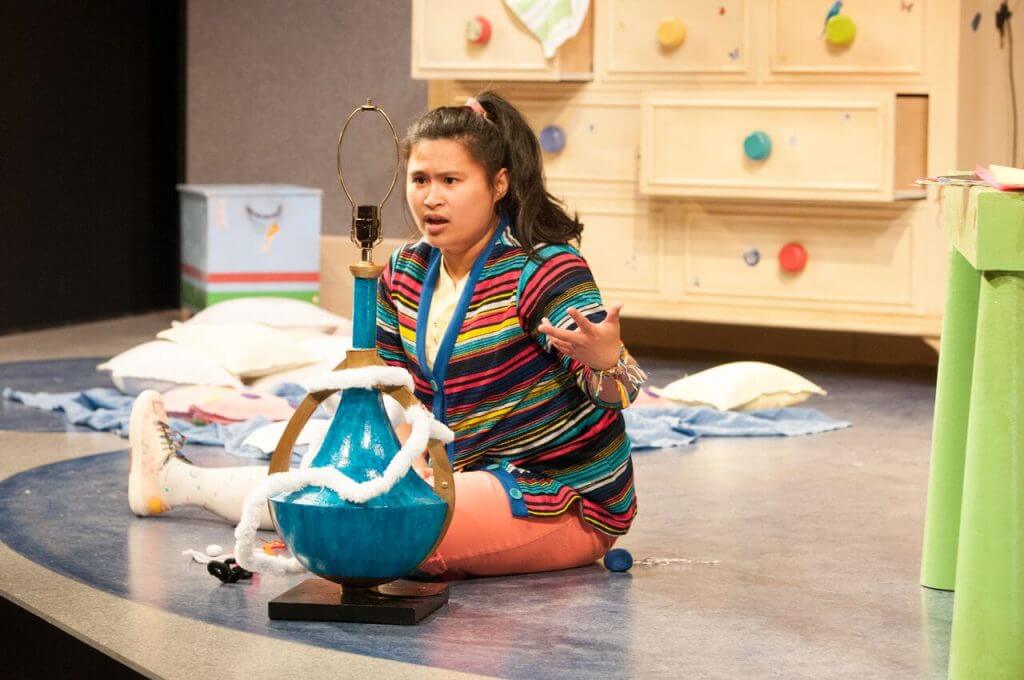 Annelih GH Hamilton is the solo performer during this one hour production of The Lamp is the Moon. Photo credit: Elise Bakketun

All season long, my preschooler has been asking “when are we seeing the show about the astronaut?” Since it’s the last show of Seattle Children’s Theatre’s 2017-2018 season, he was in for a long wait. But, I think it was worth the patience.

We snuggled up on the cushioned bench seating in the theatre and I watched his face light up as soon as the show started. He quickly moved to my lap and his face instantly broke out into a smile as soon as Shawn started apologizing to her door for slamming it. He thought this was hilarious and she had his attention.

Some of his favorite parts of the show were when he got to stand up and participate. And he liked being able to talk a bit during the show to ask me questions. But, he was sure to be silent as soon as Shawn crossed her arms to signal they needed to be quiet. However the highlight of the show for my 4 year old was when Shawn put underwear on her head as a pretend astronaut helmet!

The show stuck with him. He really wanted glowing stars to decorate his room. How convenient they are sold at the gift shop! And he insisted on wearing underwear on his head, just like Shawn.

If you are wondering if your child is ready for theatre, this is a wonderful show to try. Here’s why:

I was given press tickets for review purposes. All opinions are my own.

Other Fun Things to do in Seattle with Kids