My husband is Chinese and his parents were born and raised in Hong Kong where they learned Cantonese and English. My husband grew up with English as his primary language, but he picked up a bit of Cantonese (mostly how to order food and be polite to relatives). When we found out I was pregnant with Owen, we talked a lot about what we’d like his cultural exposure to look like.

We decided early on that we’d like for Owen to be exposed to Chinese language. His parents urged us to teach him Mandarin, as it’s becoming such an important language all over the world.

Seattle is a multicultural city and we’re so lucky to have found the Sponge program. They offer classes for babies and children in many languages, including Mandarin. I brought Owen for a trial class when he was just 3 months old and I really liked the way the class was structured. They were very encouraging for multiple caregivers to accompany each baby, and they wanted the caregivers to learn alongside the babies. After attempting to learn Mandarin through Rosetta Stone for a trip to Mainland China, I really appreciated learning at an infant level!

I enrolled Owen in Sponge when he was 9 months old. It was fascinating to see him process the new language and as he got older and more mobile, he really participated in the class. The most helpful things were learning commands in Mandarin that we could easily use at home (“come here,” “clean up,” “wash hands,” etc.) We also learned catchy songs for all the units. Attending weekly Sponge classes helped me as a Mom because I was able to focus on learning a new skill. It was also a great bonding activity for me and my son.

When he was 19 months old, I committed to a volunteer project where I needed to find childcare for Owen once a week. I found a Chinese Toddler program in Issaquah that fit the bill. After a couple of initial visits to really understand the program, I felt completely at ease. More importantly, so did Owen. After seeing how happy he was and how much he was learning, we decided to send him twice a week. He’s been going there for 9 months and it’s amazing how much Mandarin he can speak and understand. I watch him as he correctly follows his teacher’s directions when I drop him off. When we pick him up from “school,” he will usually start singing songs or counting in Mandarin. When I try to speak Mandarin back to him, he just looks at me and laughs!

READ  How Kid-Friendly is the Seattle MoPOP Museum?

What’s really been cool about these programs is that I’ve met a lot of families whose children are half-Chinese and they also are trying to find a balance between sharing cultures. It’s also been fun to see Owen’s reaction when he hears strangers speaking Mandarin at restaurants or at stores. We’ve also gotten some electronic toys that speak Mandarin and we have some Disney DVDs that are dubbed in Mandarin. He really enjoys and seems to understand them.

Our goal with exposing him to Mandarin isn’t for him to be bilingual. Neither my husband nor I speak Mandarin. It’s unrealistic to think that he will be bilingual from learning Mandarin twice a week. What we do hope is that he will have a basic understanding of the language that he can continually build upon. By exposing him at such an early age, we hope it will be easier for him to learn Mandarin (or any language.) We also hope he will have a better understanding of his Chinese heritage beyond what he experiences in our family. 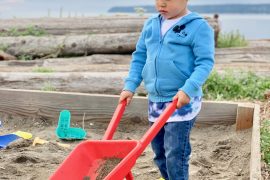 Date Night in Seattle: Ideas for the Perfect Evening

An Exclusive Seattle Aquarium Behind the Scenes Tour