Seattle Children’s Theatre‘s holiday production is Mr. Popper’s Penguins. After a successful run on 42nd Street in New York City, it’s debuting at SCT. The show is recommended for kids ages four and up. It features penguin puppets, vivid storytelling, actors playing multiple characters, lively songs, and so much more! 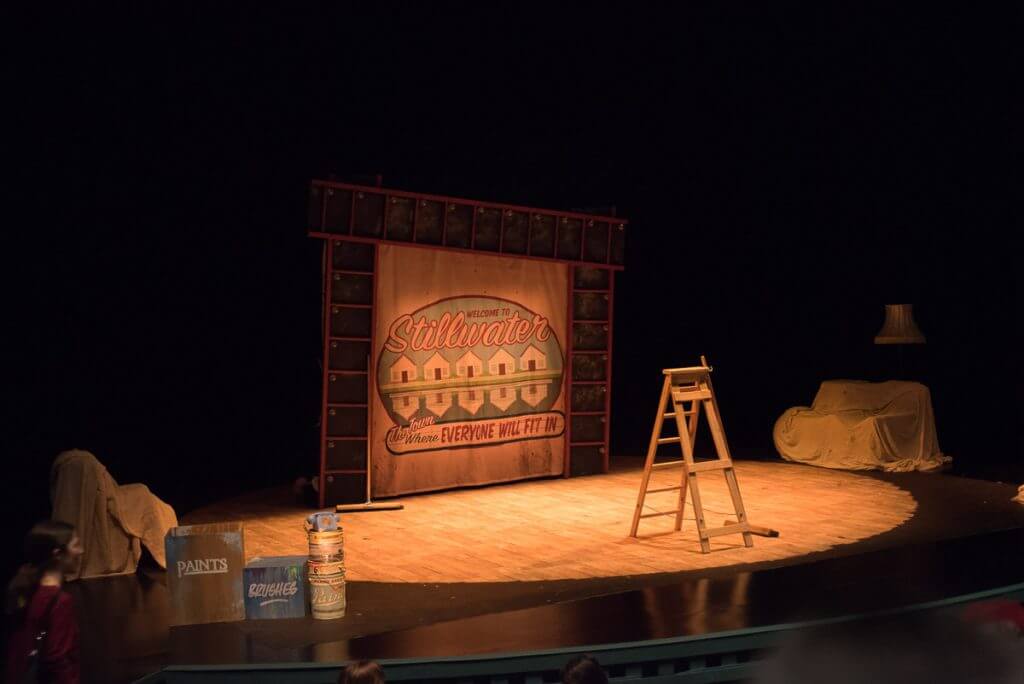 The set and props had a great vintage vibe.

Mr. Popper’s Penguins is based on the classic children’s book written by Richard and Florence Atwater. The book was originally published in 1938. It tells the story of a poor house painter who dreams of exploring Antarctica. After writing a fan letter to a famed explorer, he receives a package that changes his life forever. You can purchase Mr. Popper’s Penguins

through my affiliate link or at the show. 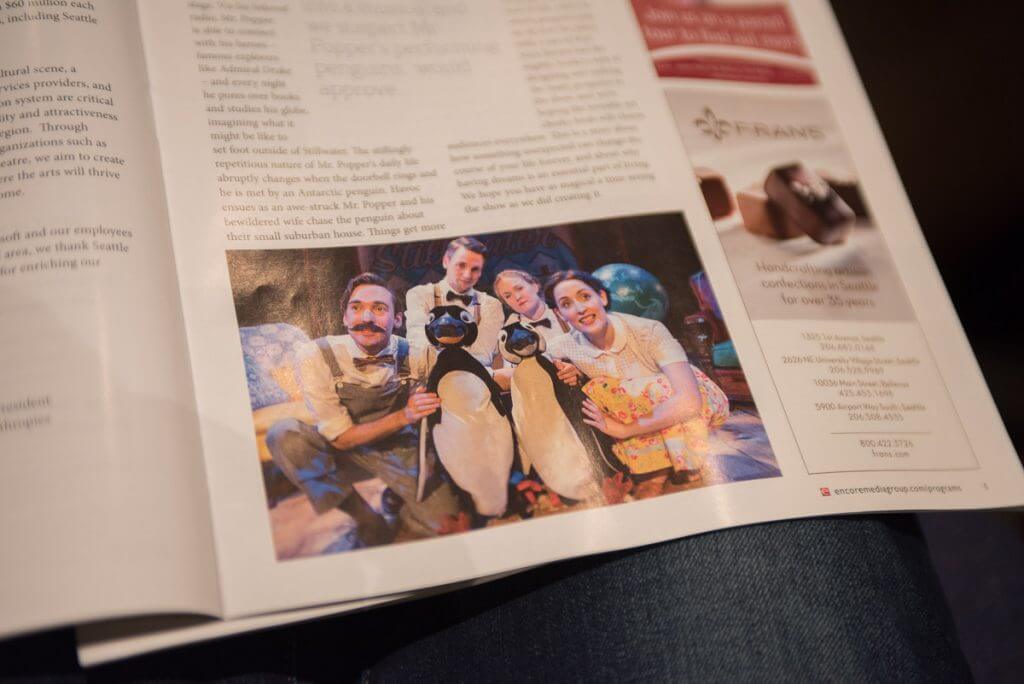 The cast of Mr. Popper’s Penguins was fantastic!

I thought this presentation was lovely! The vintage-inspired costumes and props really set the stage. Their actors did a fabulous job with their old-timey English accents. Therefore, the whole production made me feel like a was watching a British WWII era film in the coolest possible way!

At the end of the show, the cast led the audience in a fun dance number. It was energetic and I heard squeals of laughter from all the kids around us. My son insisted I get up and dance with him and it was a fabulous way to cap off a great show!

What My Preschooler Thought

My son was very excited to see this show. We had gone to The Snowy Day last year and he talked about it for weeks after. This was the first time he’d been to an evening performance right at bed time. I wasn’t sure how he’d do, but he was mesmerized from the first song! He kept leaning forward and intently watching all the actors. As soon as the song finished, his whole face lit up and he clapped like crazy! 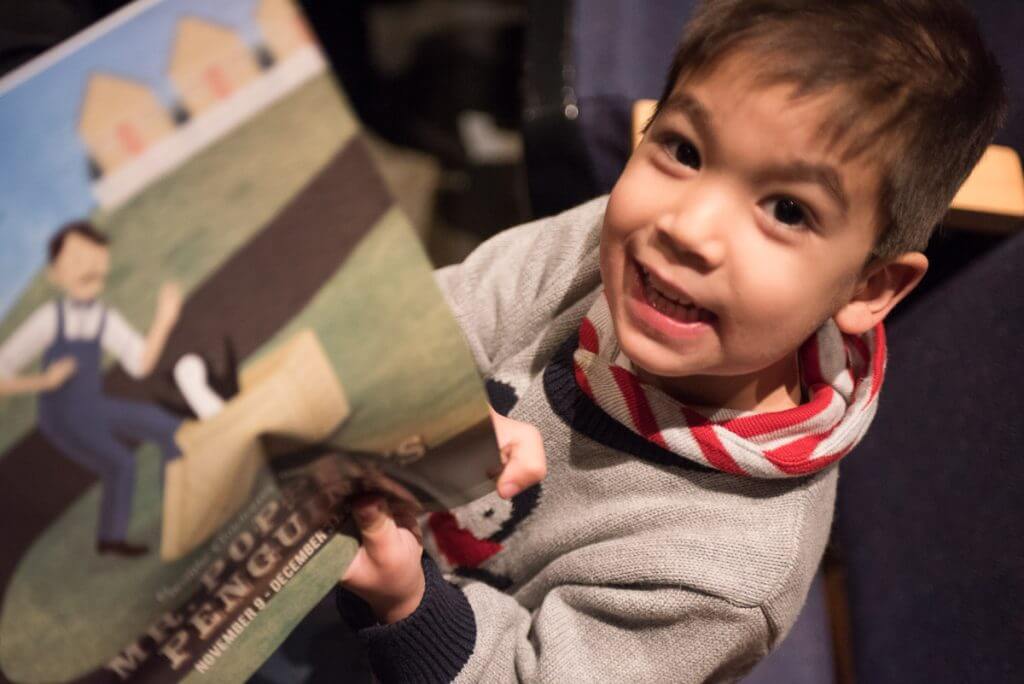 My preschooler was even excited to peruse the program.

When the box arrived at Mr. Popper’s house, he kept saying, “I don’t know what’s inside! He should OPEN it!” And when they opened it, he kept saying, “Mommy, it was a PENGUIN!” And then it started moving around the house and it blew my preschooler’s mind. But when the penguin ended up in the refrigerator, my son thought that was the funniest thing on Earth!

He had a few questions during the show about how the penguin puppets worked. So did the kids around us. My son got a kick out of the other kids laughing and responding to the show.

The only part he didn’t like was when the producer walks into his office, sees Mr. and Mrs. Popper and their penguins and asks what they are doing in his office. Apparently, my preschooler found this really rude and kept saying he had bad manners. We spent a lot of time talking about what he could have said instead to sound nicer. But that was literally the one thing he didn’t love out of the entire show. 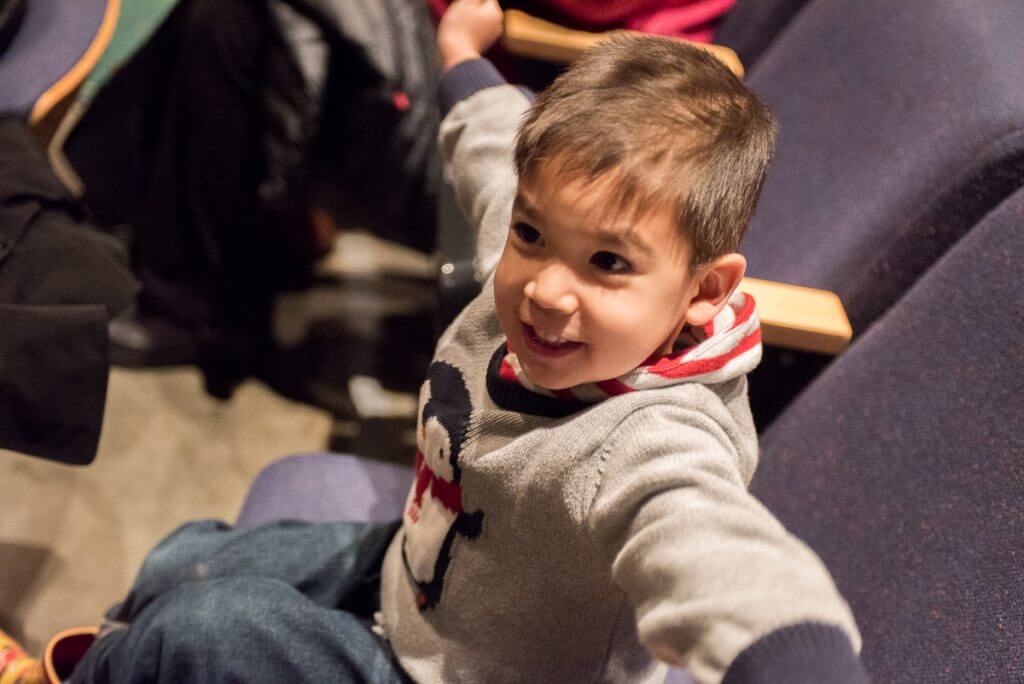 Do you see my son wearing his penguin sweater for Mr. Popper’s Penguins?

He went nuts for the part near the end of the show when confetti snows down on some of the audience! It surprised us! In retrospect, I did hear the fans warming up before the confetti, so you can warn kids who don’t like surprises. Note: Sit up front if you’d like it to confetti on you, or sit in the middle/back of the theatre to just watch.

But, he absolute favorite part was watching the penguins on the boat at the end of the show! He couldn’t figure out how they could get on a boat. The whole concept seemed hilarious to him. All weekend, he kept telling me about those funny penguins who got on the boat.

Stop By The Gift Shop 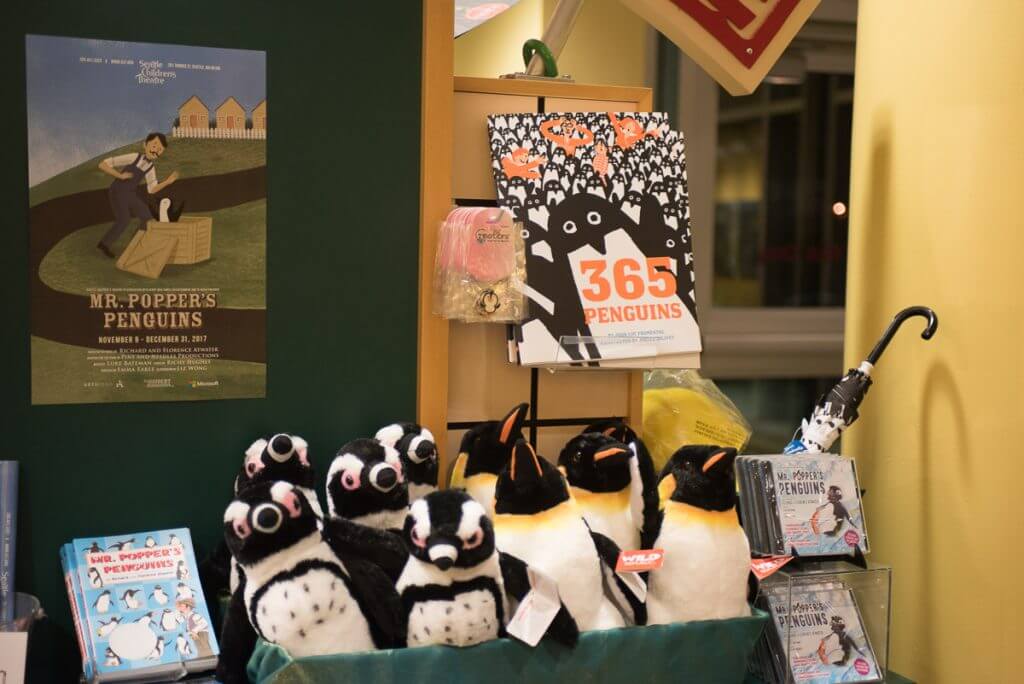 The selection of penguin-related gift items was fabulous!

My husband is famous for saying, “I haven’t met a gift shop I didn’t like.” My preschooler seems to have inherited this. But, I will say that the gift shop at Seattle Children’s Theatre is pretty cool. I mean, they have a puppet theatre where they encourage kids to “try out” their puppets and create a show! 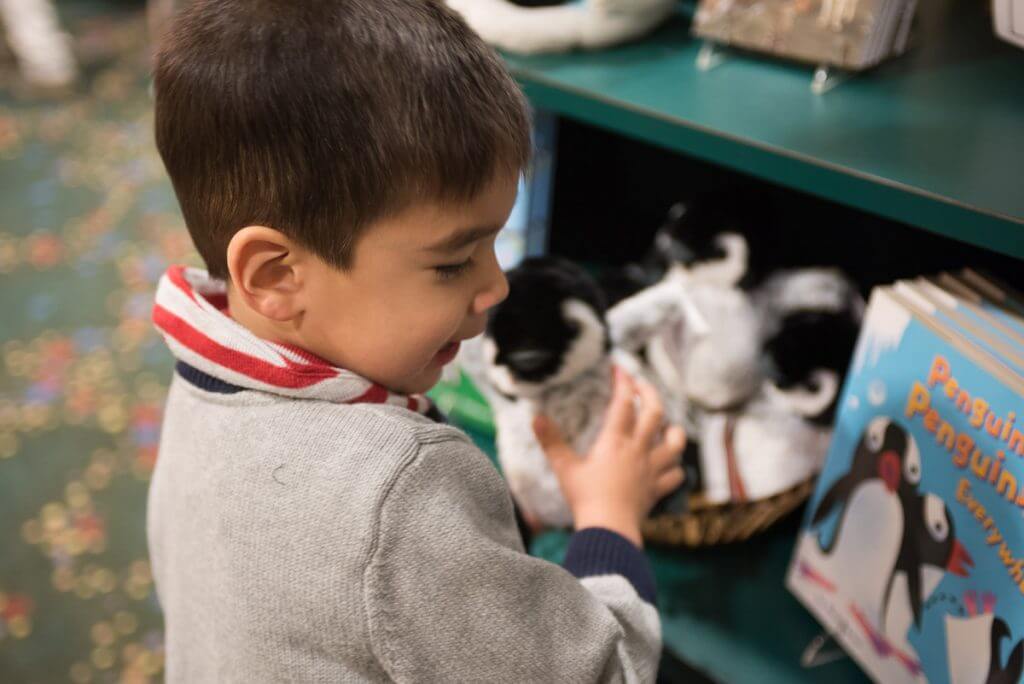 My son liked saying hello to all the stuffed penguins.

And they have a lot of quality items. I always get a bit giddy for gift shop items that correspond to museum exhibits/events. The selection of Mr. Popper’s Penguins items did not disappoint. Finally, the best part is that you are supporting a non-profit. 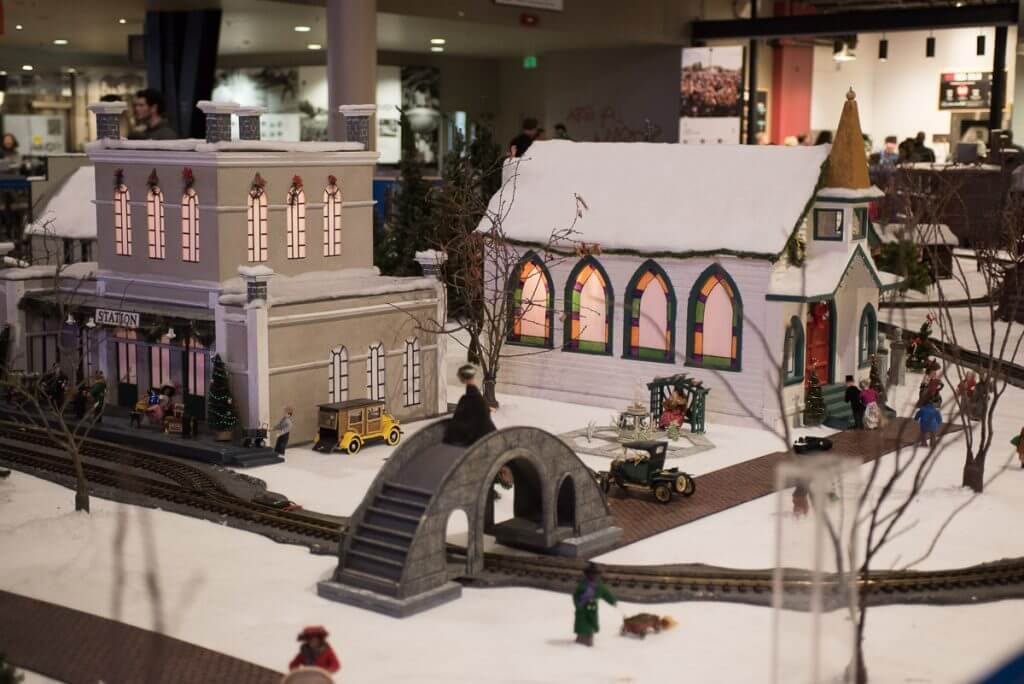 Seattle Center’s Winterfest is a great addition to a day at Seattle Children’s Theatre.

For the ultimate Seattle family adventure, explore Seattle Center’s Winterfest before or after Mr. Popper’s Penguins. It starts November 24 and festivities include a model Winter Train & Village, Winterfest Ice Rink, ice sculpting, student performances, and more! You could even add in a ride on Seattle’s Monorail. 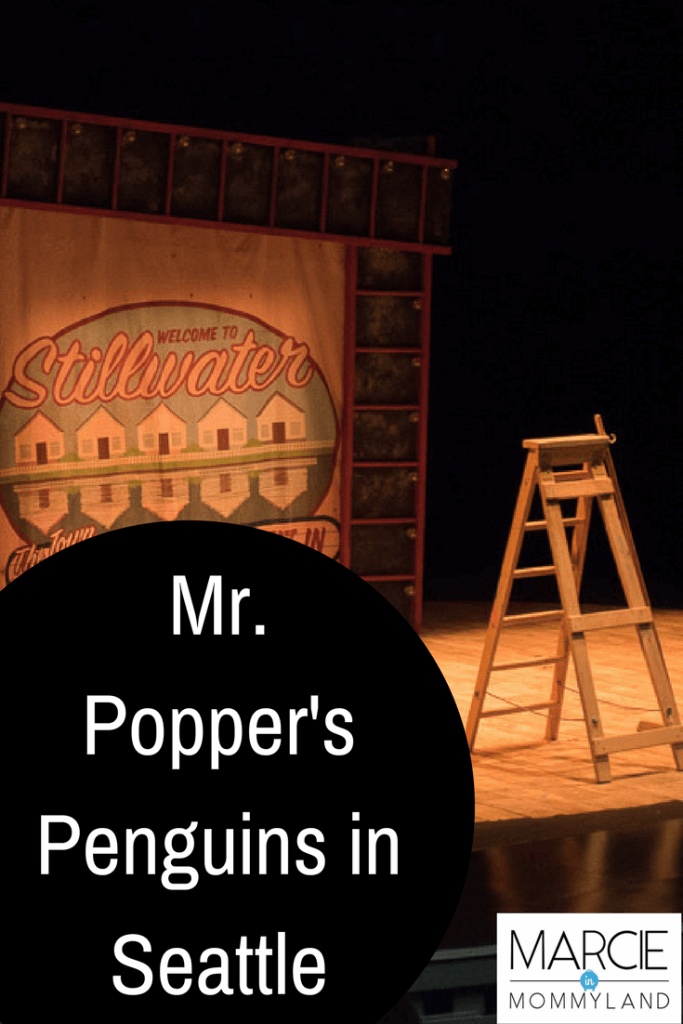 Seattle Children’s Theatre sent me press tickets for review purposes. All opinions are my own.

There is so much holiday cheer packed into Downtown Seattle this year!

My heart is easily captured by penguis! Am sure I will love this play and even my sister.

Penguins are one of the cutest animals!

What a wonderful experience! I love taking my little one to the theater. We took her to her first show when she was two and we haven’t missed a Summer production by our local theater company since!

Yay! So glad you're doing that! I'm hoping to take my kids to more summer productions from our local theatres!

I would love to see this show.’it looks like it would be so animated. Love to bring my friend and her daughters to it.

It was quite lively and kept our attention the whole time!

Awesome! Penguin are so cute and I would love to watch this show with my little brother. Thanks for sharing!

There were SO many penguin puppets/stuffed animals that it was quite entertaining!