When my friend suggested that we do a toddler play date at the Ballard Locks, I was a little surprised. I hadn’t been there since I was on an elementary school field trip and I remember being a bit bored. But, I know it’s a popular tourist attraction here in Seattle, so I thought we’d give it a go and I’m glad we did.

I arrived at 10:30am and was able to find parking easily in the lot. This surprised me because it was the first really nice day of Spring/Summer and there were several school buses and tour buses parked. I paid for parking and then headed to the Ballard Locks Visitor Center to meet my friend. I put my toddler in the stroller, per his request, because he wasn’t feeling very well and I wanted him to have a fun time.

The first thing we did was watch the boats. Since he was in a stroller, I was able to wheel him right up to the railing for an unobscured view and I was able to sit on a bench next to him and not worry about him climbing on the railing. Thankfully, it’s a two-tiered system, so if a kid does climb over/through the railing, there’s another fence before they’d get to the Locks. It was interesting to see the workers interacting with the captains of the boats and watching the boats quickly disappear as they sunk down with the water. My son was completely engaged and wanted to see more and more boats.

After those boats were through the Ballard Locks, we decided to check out the Fish Ladder. I distinctly remember standing there for what felt like an eternity when I was in school and not really caring about the fish. My expectations were already low and they were lowered further when I had heard that we probably wouldn’t see any fish. Fortunately, we saw several fish and my toddler’s face lit up when the fish quickly swam in front of his face as he stood right next to the glass window. This made me feel excited alongside him as we patiently waited for a fish to come and then cheered as the fish worked his way through the ladder. And because the fish are swimming against the currant, often times you can watch the same fish multiple times, which is perfect for toddlers. The Fish Ladder is indoor and there is a ramp that gets you part-way down, however you have to carry your stroller down many steps if you don’t want to leave it right by the entrance. That was pretty lame, but we managed.

As we headed out of the Fish Ladder area at Ballard Locks, the kids stopped at a sculpture and ran around chasing each other and hiding. We also watched another round of boats go through the Locks, which was just as exciting as before. On our way out, we walked through the Botanical Garden which looked like an ideal spot for a picnic lunch or to let the kids run around.

My toddler did not want to go back into the car, so we strolled across the street to Red Mill Totem House and grabbed a burger and fries to eat on the drive home, which really hit the spot. In the future, we might grab food and eat it at the Botanical Garden (or at least grab a cold drink) before walking around the Ballard Locks and seeing the Fish Ladder. My friend was absolutely right about picking a great spot for a toddler play date. We will definitely return. 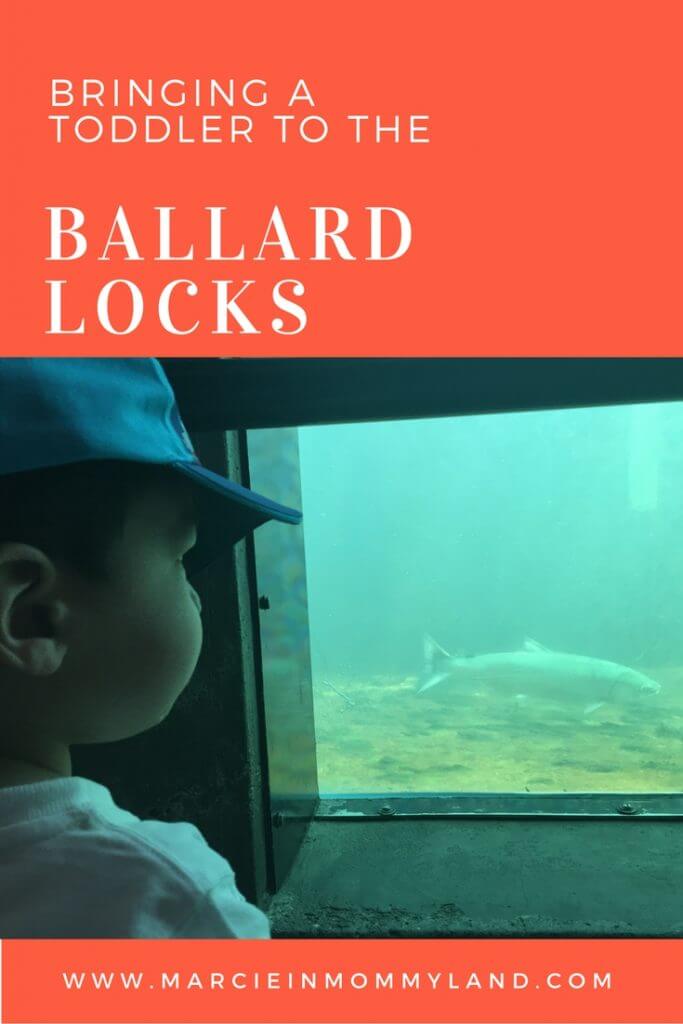